Terminal: After arriving in on the red eye from Seattle (you can read that InFlight review here) I decided to try out the Admirals club between the H and K concourses which was conveniently directly on the path between my connecting flights. The check in area was quite large and relatively busy but it wasn’t long for my turn, where the agent advised I could use the flagship lounge, but it’s closed until 7am. Thus I took the lift up, armed with my free drink coupon and checked out the lounge.

It’s quite a large lounge with separate sections divided off into small zones for seating and the main bar section. There is also an executive meeting room floor available but I didn’t have a chance to check that out. Unfortunately once inside the lounge, other than some filter coffee and a horrible excuse for orange juice, it’s all user pays – meaning if you want to eat or drink anything, get that wallet out. I know this airline is bankrupt, but really, what is the point of the lounge if really it doesn’t provide anything other than a quiet chair? You still need to leave the lounge to be at the gate before boarding to ensure you get some overhead locker space so you don’t really get much value for money in terms of lounge access in the USA.

Leaving the lounge about 10mins before boarding was due to be called I arrived at the gate to notice that there was no aircraft at the stand, which means one thing only – delays. At the scheduled boarding time an aircraft arrived and an announcement was made that the original aircraft has gone out of service and a replacement had been pulled in. The good side of this aircraft swap was that the new aircraft was much larger than the original 767-300 that was scheduled being upgraded to a 777 so the 35+ people on the standby list had a better chance of getting to Miami. The bad side is that the crew assigned to this flight were not a 777 crew so the standby international crew were on their way from home to the airport. 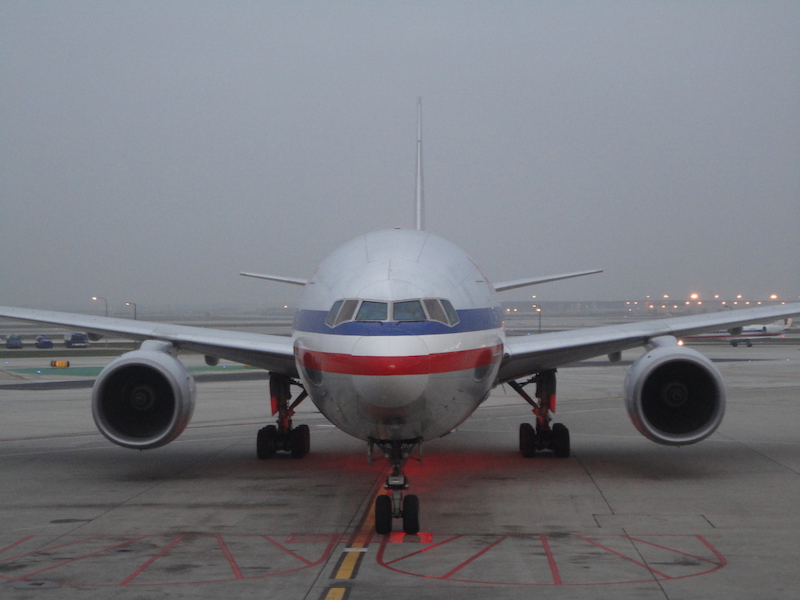 Departure: The gate agents did a great job of changing people’s seat assignments to accommodate the new aircraft and were keeping everyone updated on how many crew were missing and where they we up to. Each arriving crew member was greeted with a round of applause before the last arrived to a few cheers. Boarding began a minute or two afterwards starting with First class passengers so I made my way down and took my assigned seat. The mood with fellow first passengers was pretty high as we found the flat bed seats and spacious cabin on board. Photos were taken and everyone was pretty friendly before the gate agent cam back on board and asked us to deplane – they had got the crew head count wrong and it turned out there wasn’t enough crew on board to meet FAA regulations and thus we were all had to deplane and wait on the jet bridge for the remaining crew to arrive.

We weren’t able to go back into the terminal as we had already been scanned on board – thus the jet bridge was our waiting point for the next 15mins or so until the remaining (and rather unhappy looking) crew arrived. Some passengers speculated that the delays were part of the union action to seek better pay contracts however I think that these were a genuine I just got out if bed and had to drive to the airport delays. I’m pretty sure if that was me I also wouldn’t have been wearing an ear to ear smile either.

The final round of applause signaled it was time to re board our aircraft, grab a pre take off orange juice and get settled in for departure. The captain advised our route and apologized for the delay saying he would try and make up some time in the air before we taxied out and got set up for a very short take off roll for a 777 – presumably no cargo and a light load helped with the very short roll into the skies. 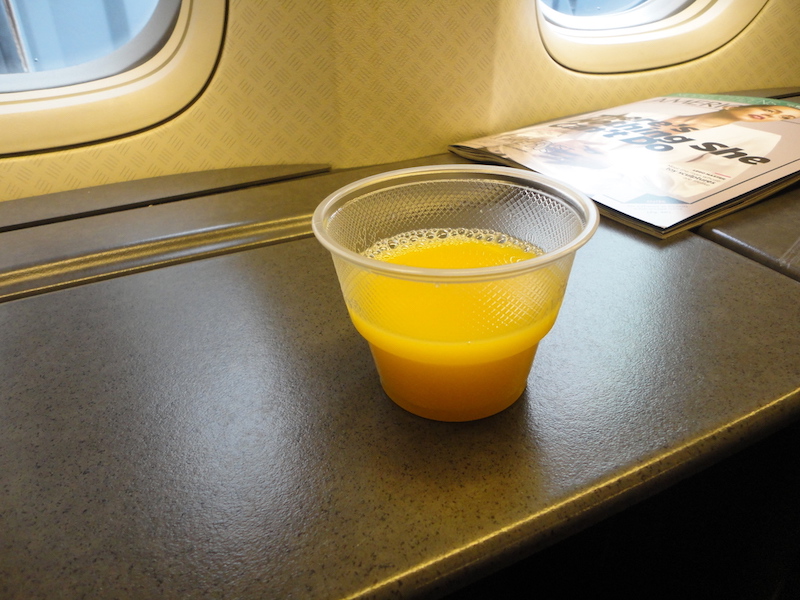 Seat: 4A. The aircraft change did make a huge improvement to the seat option – a fully flat bed complete with guest seating position and if you rotate the chair towards the window, a full work desk setup proving plenty of options for in seat comfort. Covered in dark leather the seat was pretty comfortable and although a huge improvement on the recliner, something just doesn’t feel right about the seat and that’s its cleanliness and age. I’m not sure how old the seats are but they look very tired and well used and the cabin was pretty dirty with spilled chips/crumbs on the floor and seat. As a substitute aircraft I’ll cut some slack and presume that if this aircraft was scheduled to be used it would be in top notch condition but at the same time I wouldn’t be surprised if this is it. 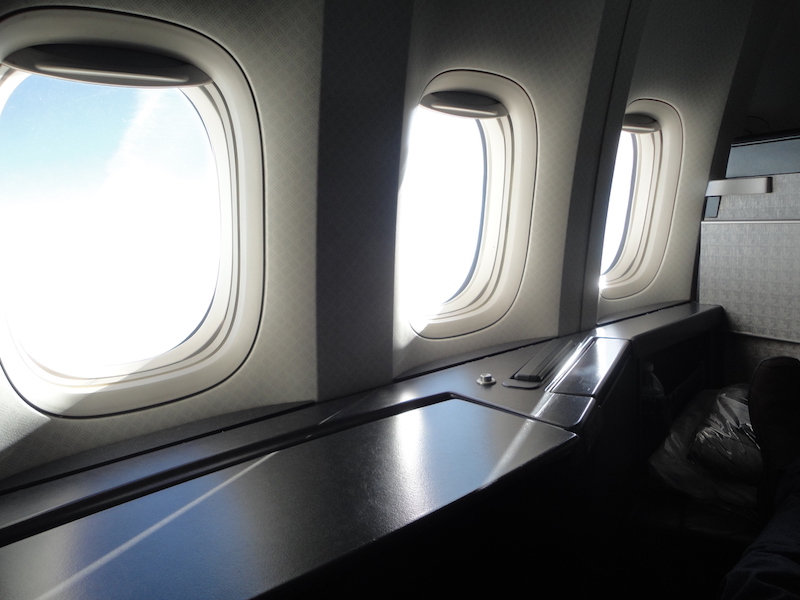 As far as inflight comfort goes it is a comfortable seat when reclined however it might actually be a little too flat when in fully flat mode, feeling a little but upside down so I found a tad short of fully flat was my comfort spot. I managed to get some solid sleep for about 30mins after the meal so its definitely a sleep able bed. Dining is a little difficult as the tray table seems a little flimsy and I found it hard to get into a comfortable spot she eating. I could have tried using the workstation but when everything is already set up it seemed like too much effort to change. 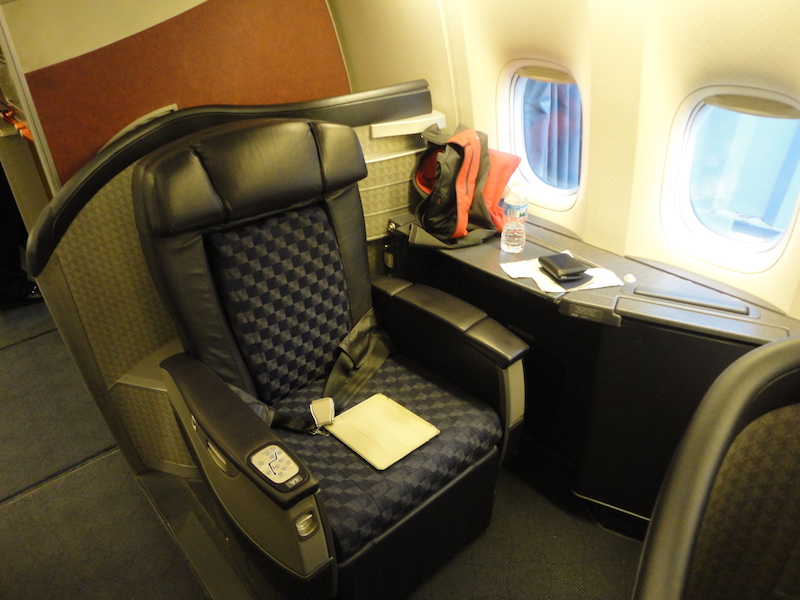 Aircraft: Boeing 777. The 777 is the biggest and thus the flagship aircraft for American Airlines and was a nice surprise from the 767 I was expecting. The 777 have a three class cabin with four rows of first class in a 1-2-1 configuration followed by business and then coach in the rear. Despite the extra space provided and comfortable seat I must say I was disappointed when compared to other airlines first class offerings on premium flagship aircraft in terms of the age and cleanliness of the aircraft. I guess on an overnight flight once the lights are dimmed and your comfortably fully flat and ready to sleep you won’t notice these things but a fresh interior would be nice – although as the airline is bankrupt I don’t see this a happening anytime soon. 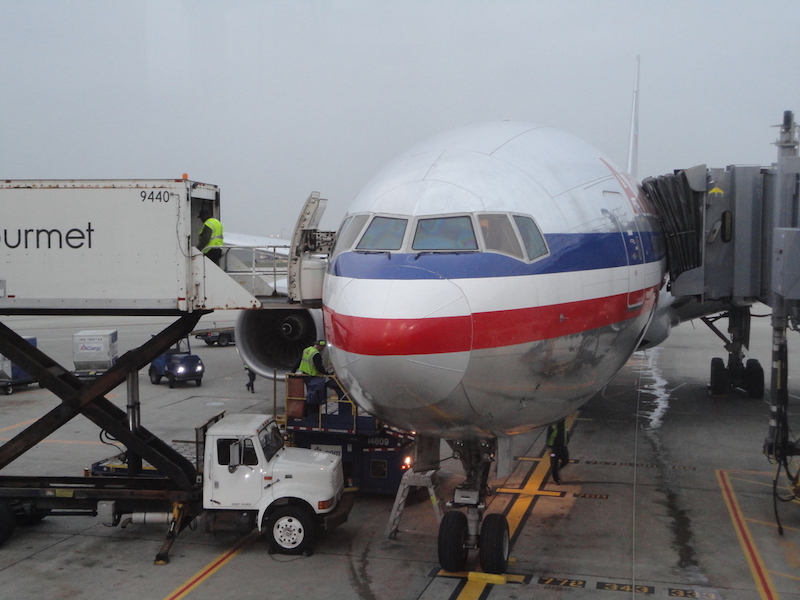 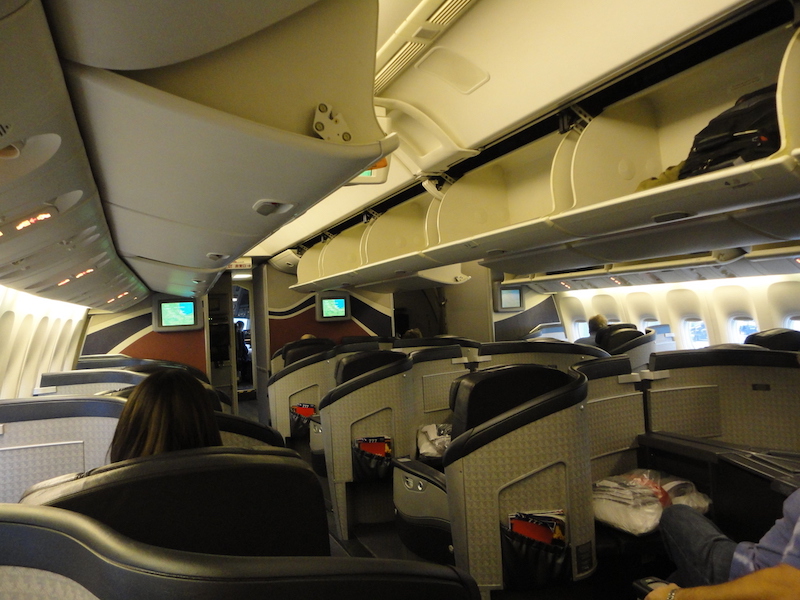 IFE: Each seat is fitted with an adjustable monitor that stows in the shelf beside the window which is comparable to the monitor that I had on the Qantas 747 in economy. The touch screen monitor can also be controlled by the handset in the seat arm and mine had a faint grid clearly visible across the screen; presumably to do with the touch sensors. Once turned on there is a selection of movies and tv shows available, not a huge range but enough for this short hop down to Miami. I chose to watch Madagascar 3 again but didn’t make it through all the movie before falling asleep. 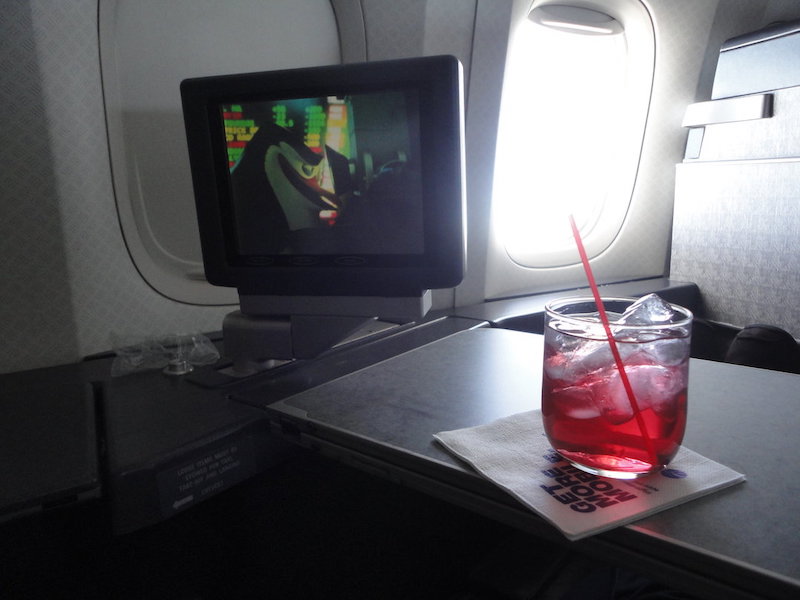 Meal: A choice of breakfast was offered being a continental or omelette – I went with the omelette as I always find cereal on a plane to be a very boring prospect. Accompanying the omelette were potatoes and beans in a salsa which was pretty good as well as a side of fruit and a choice between scones or muffins – I went for the scones which I admit were really nice and an unexpected inflight meal addition. Although it was the morning, I had been up all night on my connecting red eye flight so decided to treat myself to a pair of gin and cranberry drinks during the flight – these probably assisted with my ability to nap. 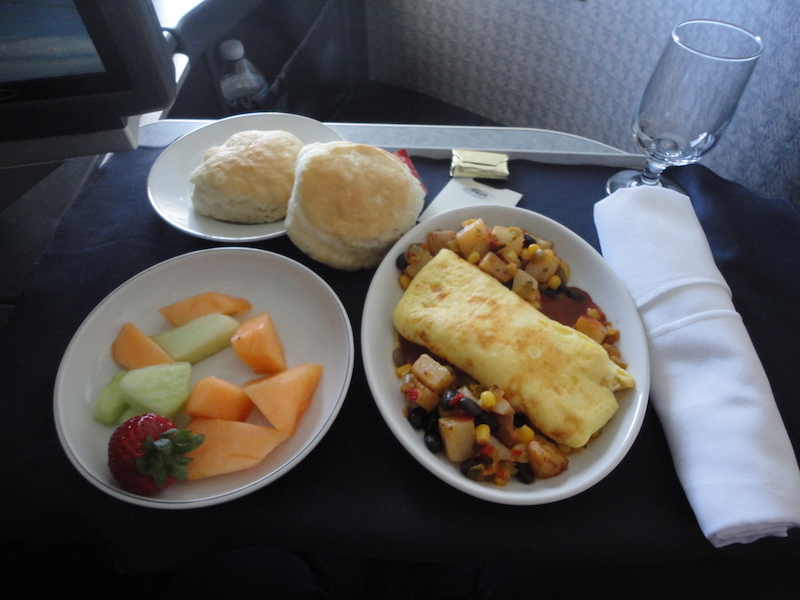 Arrival: We approached from the west with a few other airports in view on approach, one of which I think was Fort Lauderdale as the crew read out a seemingly endless list of connection gates. My next and final flight for the day was fortunately only a few gates away and there was still plenty of time to connect, unlike a few fellow passengers who, after the 2hr delay in Chicago were down to 10min connections (although since when has a flight in the US left on time anyway). The seatbelt light went out very quickly as we pulled into the gate and passengers were off the plane very quickly afterwards with no troubles getting the jet bridge up to the plane very quickly.

Crew: Despite a few unhappy crew faces when they rushed from home to run this flight to Miami overall the crew were pleasant and efficient on the flight. There were 3 serving in the first cabin which provided a very prompt service. I think the service on American is based on getting the job done efficiently and quickly whereas on some other airlines (mainly in Asia) it’s more about providing a personalized experience in an efficient way. Crew can make or break any flight and although they didn’t break it by any means there wasn’t much extra effort put in to make it a true first class experience.

Overall: The delays at the start of this flight were annoying but at least they were able to get a substitute aircraft that was a lot more comfortable than what it replaced. Those on standby were very fortunate for the delay being accommodated were they would otherwise have been left behind. I feel very fortunate that we don’t have the massive overselling and standby issues in Australia as to deal with traveling standby would be a nightmare. The food was nice, seat comfortable and crew efficient for the flight to Miami however as I said before, the overall feel of the cabin would be a little of a let down if you were doing a serious long haul flight.