Terminal: Being based in Canberra many of my reviews start off in the Qantas Business Class lounge, of which you can read my full review here. This morning I had planned to take my in laws into the lounge before their flight to Melbourne but our taxi arrived late and the traffic was unusually slow moving so they missed out this time.

Departure: Boarding was from Gate 11 in Canberra with the seemingly recurrent ‘first and final call’ boarding announcement. The queue at gate 11 in Canberra always extends back to the lounge door, so I’m looking forward to priority boarding being instigated in Canberra so we can avoid that inevitable queue that first and final boarding creates. We departed off runway 34 and after a few turns we pointed towards Brisbane and smoothly climbed out of Canberra. At 100km out of Canberra the first officer welcomed everyone on board and advised that there could be a delay in Brisbane due to ATC constraints (the joy of 1 runway operations).

Seat: 4A. Status matters, and I was able to select this seat a few days before departure. Normally the first few rows have the middle seat blocked out except on full flights to allow high flyers to have a little more space when traveling in economy. Today’s flight had both a low load factor and a low premium flyer ratio as I had all of row 4 to myself – double score!

Being the first row behind business the legroom is amazing – probably more than the 3 business class rows in front of me. There is a curtain separating the economy cabin from business, which during the climb falls backwards onto the C and D seats, and the middle seat doesn’t have a seat pocket but neither of those bothered me as the sole occupant of the row. Bifold Tray tables fold out from the armrest and although a little less stable than the fold down trays in the rest of the cabin I was able to type on the iPad without much trouble.

Interestingly the seat belts in this row are equipped with airbags, something I haven’t seen in an economy product before (herringbone business class seats all seem to have them) but I guess this is a good thing, although I’m not sure how they would work if you adopt the lean forward and hold your feet to the floor brace position (I guess engineers smarter than me have already thought of this). 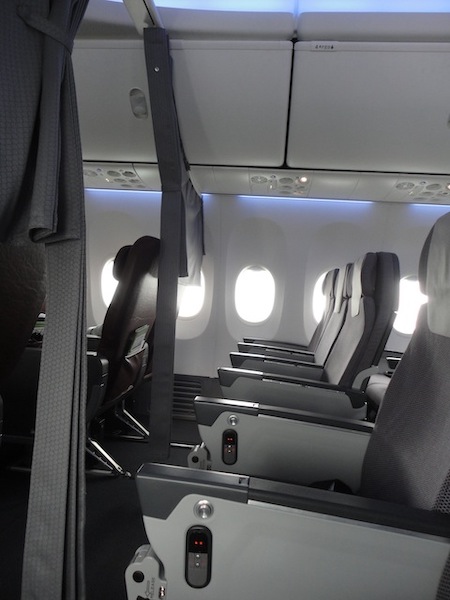 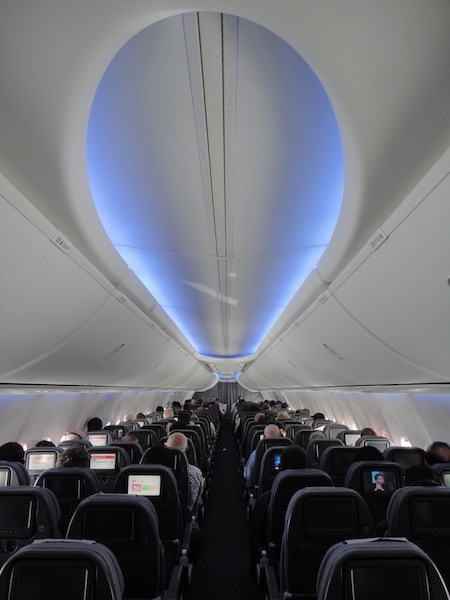 Aircraft: 737-800 with Boeing Sky Interior (BSI) rego VH-VZY  (Thanks to the peeps at @QantasAirways on twitter for helping me find the rego after I forgot to check it out before boarding). These new 737’s are the bee’s knees of the Qantas narrow body fleet, with overhead bins and interior panelling similar to the 777 series the interior feels fresh and spacious. The mood lighting is softer than the old fluro’s and the blue lights just give a bit of extra colour which makes the plane look a lot more modern than the older 737-800’s and leaps and bounds ahead of the737-400’s.

I’m not sure if the BSI has better soundproofing panels however it felt a little quieter than what I’m used to, so if that’s the case, good work Boeing. The layout is similar to the older 737-800’s with the first 3 rows being business class with new 2-2 red leather seats followed by 26 rows of the standard fabric economy class seats. 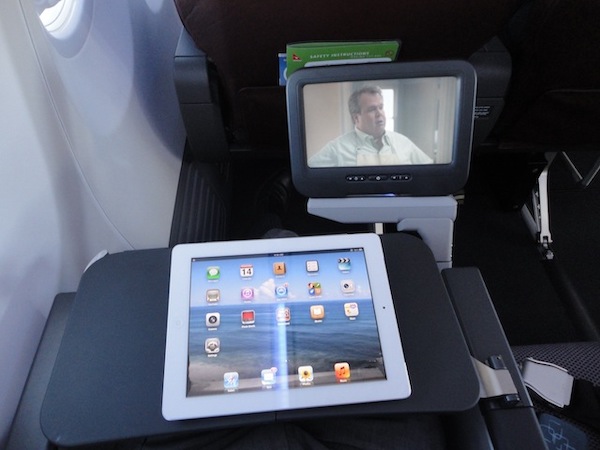 IFE: Other than the spacious feeling, bigger recessed overhead bins and the fresh plane smell, most passengers will appreciate the in seat gate to gate IFE in every seat. The system has music, TV shows, inflight moving map, some games and the Qantas radio just like on the A380 and refurbished 747-400ER’s. Although its missing movies, for the short haul domestic legs you probably aren’t going to be in the plane long enough to watch a movie. The touch screens are really responsive and the picture quality is pretty good for on a plane.

Although there is USB and power points at each seat I couldn’t manage to connect any of my iDevice’s to this system but otherwise the system is pretty good – especially helps pass the time during shorter hops with a few episodes of Modern Family. I could have asked for help but was happy to watch the extensive content available.

The PTV screens are in the seat back for all economy rows except row 4 which has fold out screens in the arm rest meaning that if you want gate to gate IFE this row isn’t for you (although the space and legroom outweighs the IFE in my view). The fold out seats do provide a lot more room for adjusting your viewing angle, which is also a plus. 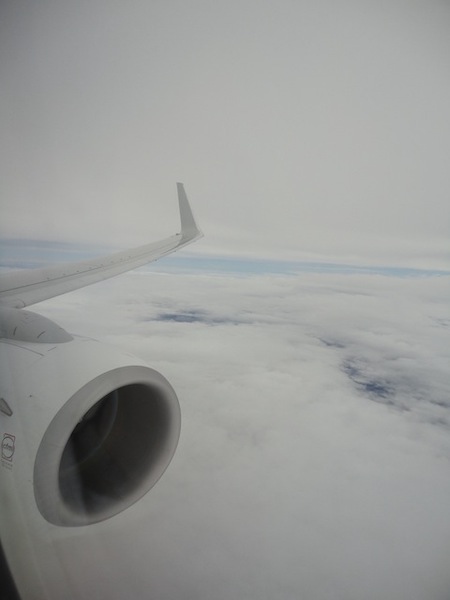 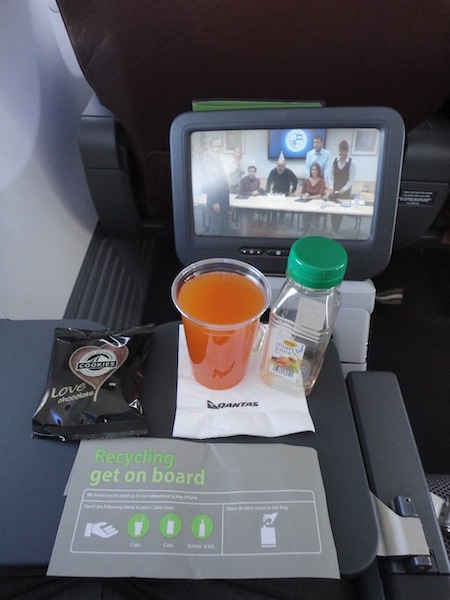 Meal:  Unfortunately, despite the new plane, the morning tea snacks seem to get smaller and smaller. The cookie, this time from Snowy Mountain Cookies (I prefer the Byron Bay Cookies) and juice (or tea and coffee) was ok considering I just ate breakfast in the lounge but if you had rushed to the airport and skipped breakfast the snack wouldn’t have made a dint in your appetite. 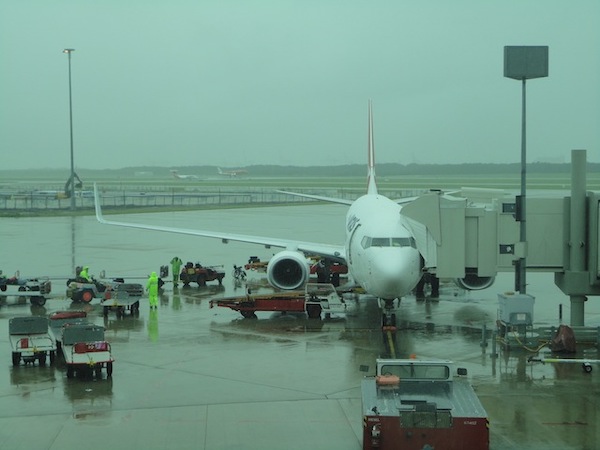 Arrival: Shortly before commencing decent the first officer advised that ATC had slowed us down a little due to congestion resulting in a few minutes delay to our estimated flight time. Brisbane was slightly cloudy with some passing showers on approach and landing however I was surprised at how smooth the decent and landing was – good piloting from the team up front today.

Crew: I think the new aircraft has stimulated the crew as all were fresh and friendly, although there seems to be a few changes instigated at keeping people flying with Qantas, especially at the top ends of the frequent flyer ladder. Each passenger in the first few rows (presumably the platinum’s and maybe gold frequent flyers) were welcomed by name by Felicity the Customer Service Manager during the newspaper round in a similar manner to how the CSM greets passengers in business class.

These are small changes but they cost nothing and make the passenger feel like the airline wants your business and is keen to interact with you more personally because of your continued loyalty. Hopefully these types of changes continue which will help QF compete with Virgin’s ever-increasing slice of the business travel market.

For the first time during my trips since I started writing these reviews, the cabin crew asked me why I was taking photos of the plane, meal and everything, saying its a very unusual experience for them. I explained what I was a little bit of an aviation nerd, and that I wrote travel reviews and posted them to an online blog. Although a little surprised they seemed pretty cool about it all. Fortunately for them they were awesome today, and the plane was great, so the positive vibe of this review is mainly due to their great attitude and service.

Overall: This is my second flight on one of the BSI 737-800’s, that are much better overall than the rest of the narrow body fleet. Unfortunately it’s hit and miss if you get one of these birds and there isn’t any easy way to tell if your flight will or won’t have the new airplane. If you are on a Jet Connect service (all QF 737 services to NZ) you will have in seat IFE but only a few birds have the BSI at this stage. As the fleet grows and replaces the older 737-400’s this superior level of service hopefully will become the norm for Qantas domestic narrow body operations. All in all its probably one of the best domestic services I’ve had in a long time – Good work Qantas. In wrapping up this InFlight review I’d like to thank the crew for a great flight and the guys and girls on the @QantasAirways twiter account for their mentions and help tracking down the rego.