Air France Domestic Business Class – Is it worth it? 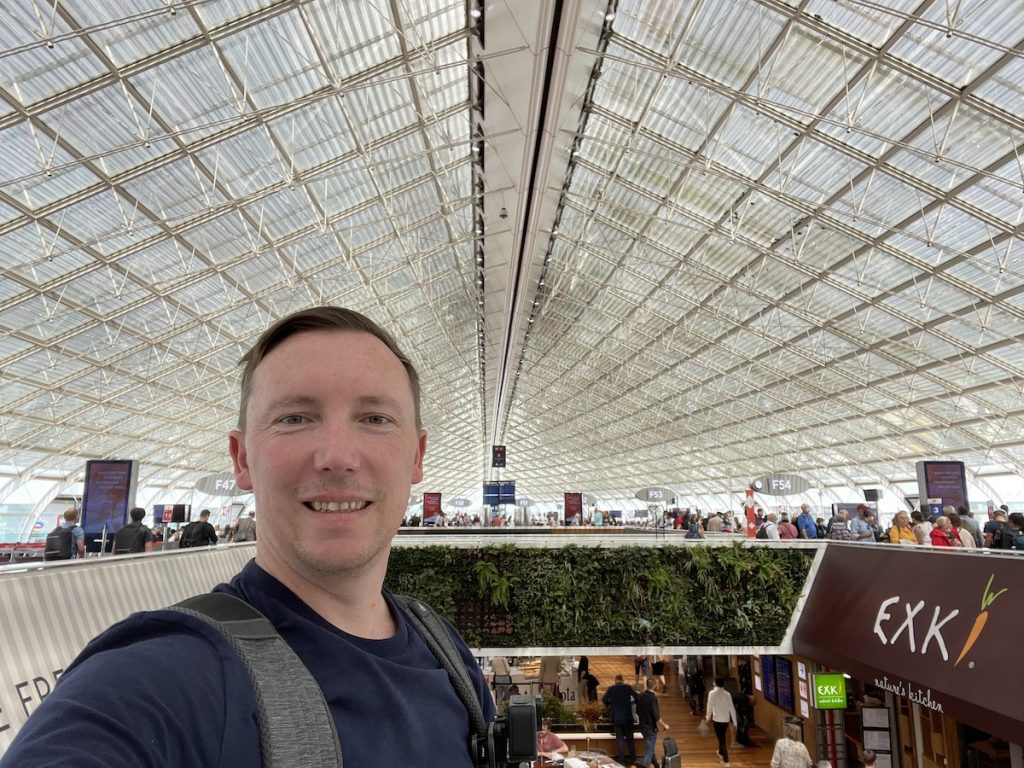 Thanks to the beauty that is the Schengen zone, I didn’t need to clear customs or immigration when entering France. Charles De Gaulle Airport is massive and the taxi from the runway to the gate took quite a while. I’d landed into terminal 2F which worked well to connect to this domestic flight down to Toulouse. It’s pretty easy to get around airside and the terminal is well labelled. I made my way direct to the lounge to grab something to eat and relax during a relatively short connection of only 2 hours.
Outside of the lounge, the gate areas are very open and bright with a hanger like feeling to each departures area. Each of the departures areas are connected by a long tube like connector with a very retro concrete industrial feel. While the gate areas are open, I found them quite crowded and warm. The waiting areas for each gate merged into each other creating quite a hectic feeling prior to boarding. 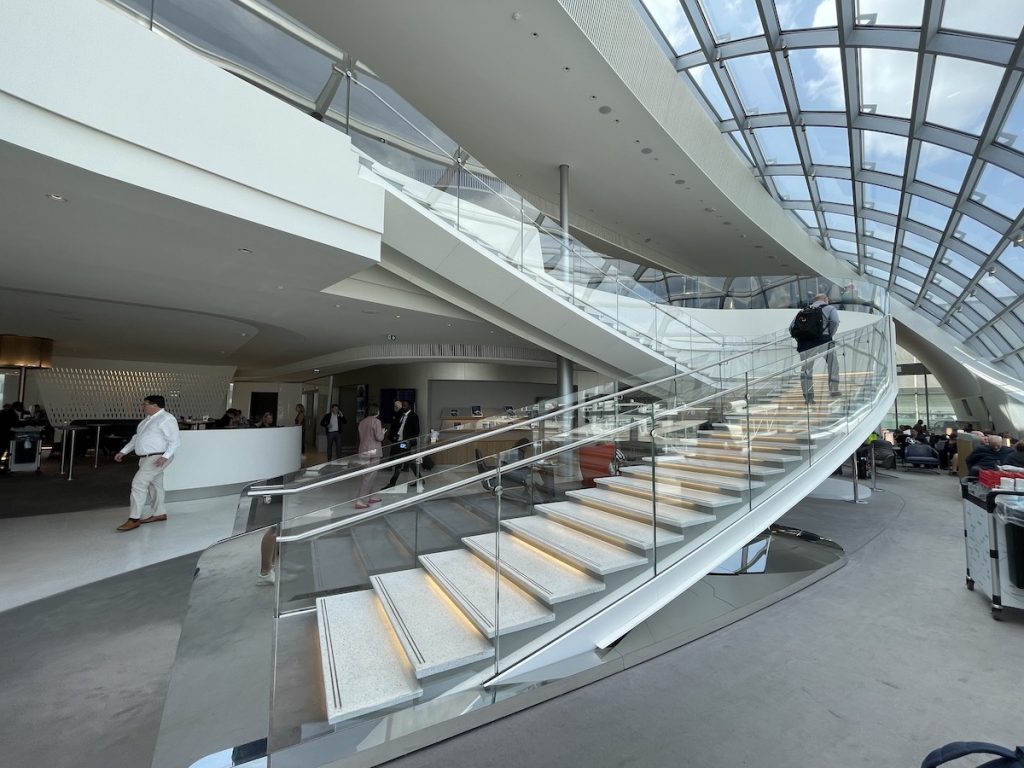 Opening its doors in August 2021 the new Air France lounge serves flights within the Schengen area, including domestic flights within France. Although I have no SkyTeam status, I was able to access the lounge while flying Business class. While it seems excessive, sometimes the price between difference economy and business within Europe is small enough to make the upgrade to business class flight worthwhile. This is particularly on one way tickets that are notoriously expensive within Europe. There are hosts to greet passengers as you arrive in the lounge although entry itself is using self service gates after scanning your boarding pass.
The lounge is spread across two levels with the signature staircase linking the two levels. I did find the spacing of the steps unique making it feel quite strange when walking up the short stepped staircase to the upper level. For aviation geeks, the view from the staircase across the apron is impressive. The views over the tarmac also let heaps of light into the lounge making it feel well, bright and airy.
Both upstairs and downstairs have seating areas and both areas were very busy when I visited. There is food and drink available through mini self serve stations throughout the lounge. As one would expect in France, there were staff offering champagne to guests throughout the lounge. While the food offerings were well spread out across the lounge, I found the food offerings themselves a little underwhelming.
If you’ve just arrived from a long haul flight, there is a sleep zone available to get some shut eye between flights. Also present is a spa area, although all the appointments were booked out for the duration of my visit. It’s quite impressive to see this level of service in a lounge that services predominately short haul services. That said, it’s a busy lounge and despite the bright windows looking out onto the tarmac, I didn’t find the lounge overly relaxing. 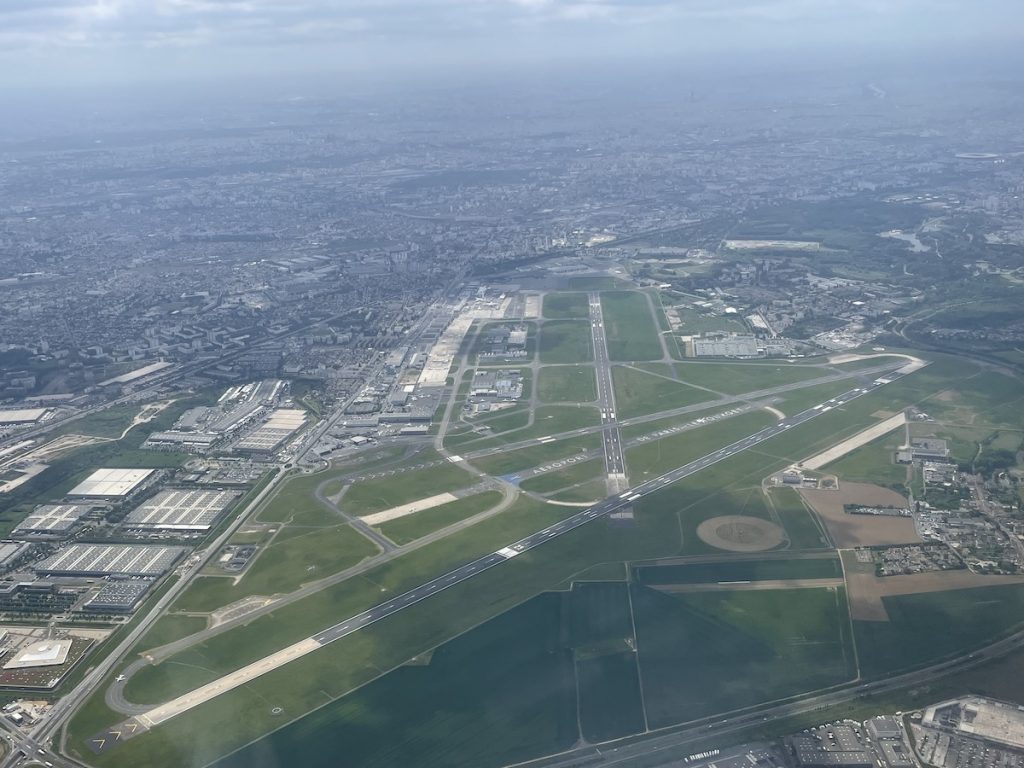 Arriving at the gate a few minutes before boarding commenced I was greeted with a large crowd of people trying to squeeze into a tight gate space. There are seperate lanes for Skyteam priority and business class, followed by zones for economy passengers. The close proximity to each other and other gates made it a bit of a crush to get to the boarding door. Once on the aerobridge things seemed to move pretty smoothly and soon I was taking my seat in row 1.
We taxied and made our way to line up on Runway 26R and made a quick departure out of Charles De Gaul. On the climb I had a great overhead view of Paris Airport-Le Bourget from the left hand side of the aircraft. Le-Bourget’s 3 runways are host to the annual Paris Air show as well as corporate aviation flights. We then made a left hand turn above Versailles (which might have been visible through the scattered clouds from the other side of the plane) and then headed in a straight line down the length of France. Due to a thick cloud cover there were no views other than a sea of white for the majority of this crossing of the French countryside. It was only as we began the descent into Toulouse that the cloud lifted and views of the countryside appeared. 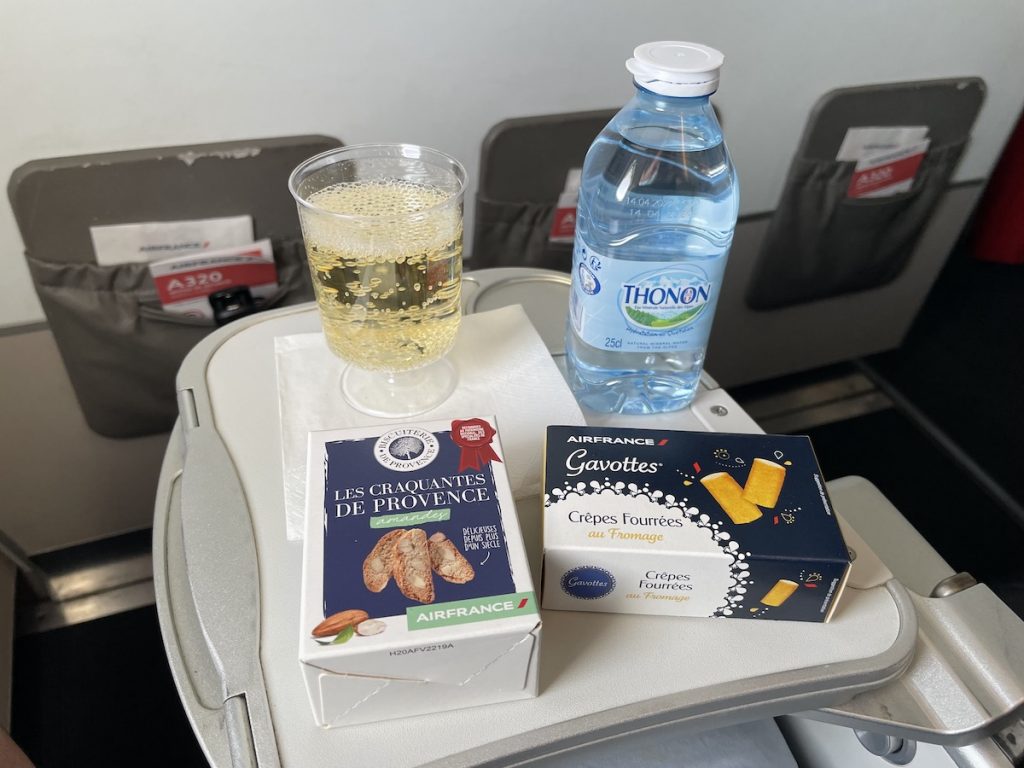 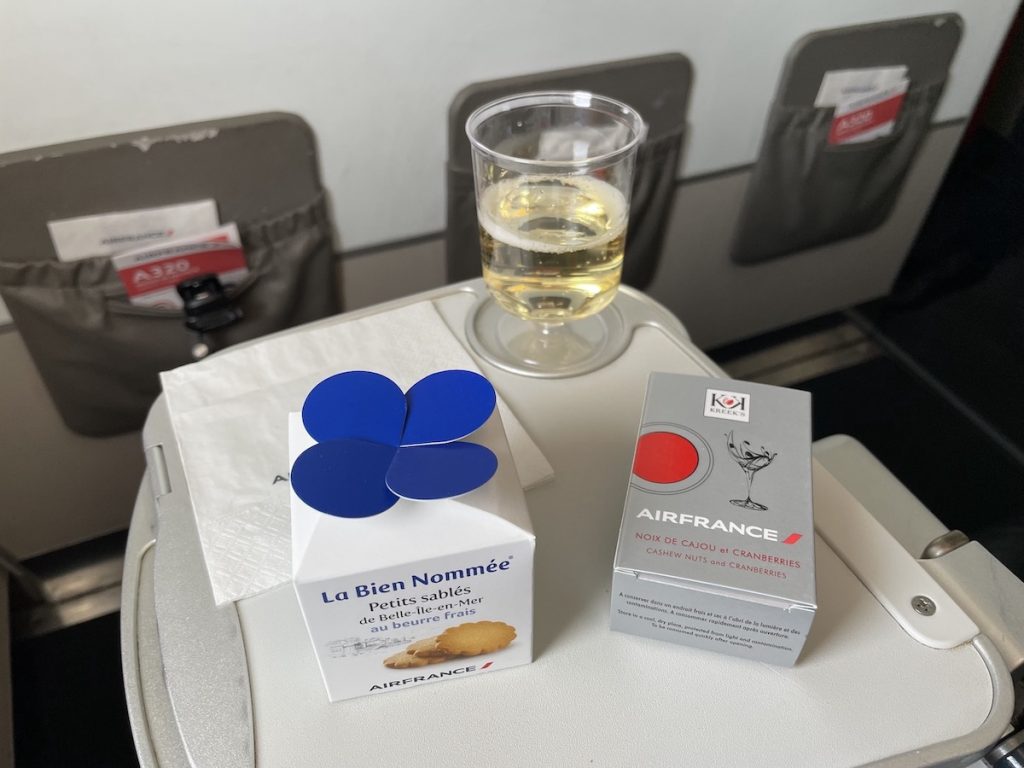 The domestic business class product is a relatively new addition to the Air France offering (if we discount the pandemic years). The product is aimed to allow international passengers to connect and fly Business class for their entire journey. The execution of the product leaves a lot to be desired. Other than lots of champagne being offered, the meal service could only be described as a couple of small snacks. There was a cheese filled biscuit and some almond bread snacks as well as a drinks service. This was rather disappointing given there is no difference in hard product when compared to economy.
The purser was however lovely and ensured my glass was always full. Although, if I’m being pedantic, the glass was not glass and instead was a disposable plastic cup. I made up for the lack of a decent seat or meal by enjoying a decent portion of the Jacquart Brut Mosaique Champagne that was served on this flight. A bottle of it retails for about $75AUD and was a nice drop. Despite having perhaps a tad too much for such a short flight, other than the champagne, there was no difference to economy.
The crew member was great and gave me a sick bag filled with a sample of all the snack boxes to take with me after the flight. While this was a nice gesture, I feel it doesn’t make up for the poor food offerings. 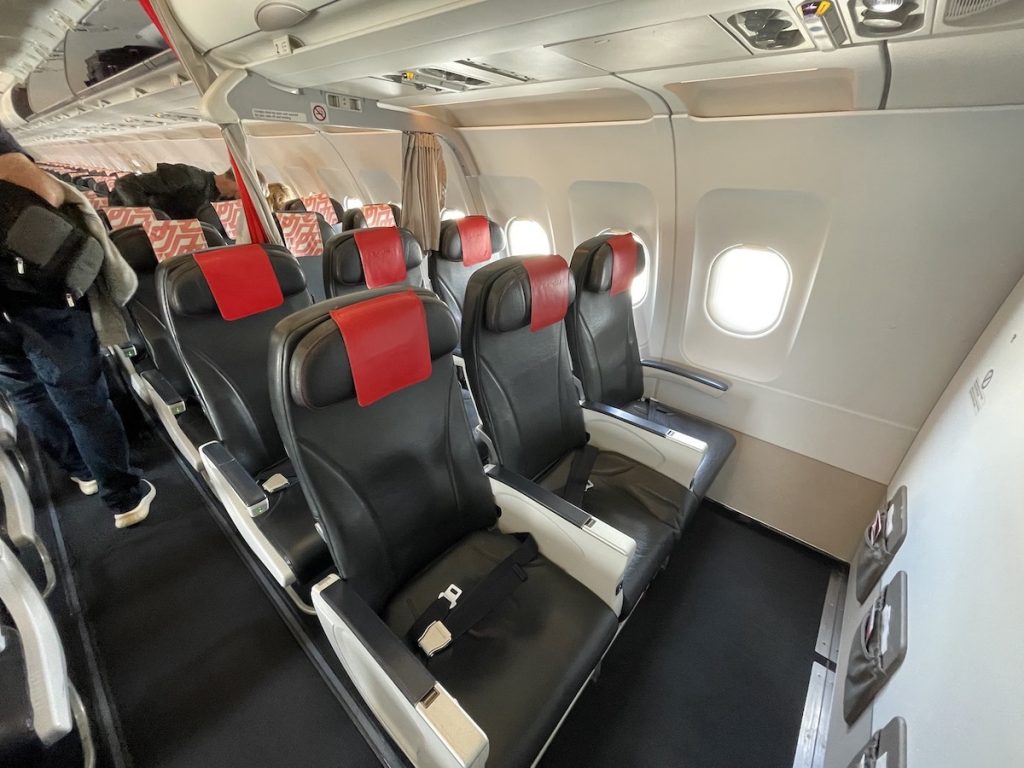 The business cabin is flexible on the A320 series aircraft with a curtain divider moving up and down the cabin based on need. The first two rows were dedicated for Business class for this flight and the remainder were allocated to economy. Air France describe the onboard business class seat as “on board, get comfortable in a spacious seat designed exclusively for your comfort.” In reality, the EuroBusiness seats are really just economy class seats with the middle seat blocked.
Some airlines, like BA, place a table in the middle seat making it look like they made an effort, but on Air France the middle seat on is just left empty. The only differentiation between the classes is a curtain between the cabin and solid red instead of red and white head rests. This makes for an expectedly underwhelming hard product.
There were only 2 passengers flying in business on this flight to Toulouse. In a strange quirk of seating allocation, both of us were seated next to each other in an otherwise sparse cabin.  The lady seated beside me asked to move, and after some hesitation, the crew member allowed her to move to the empty row of seats across the aisle. After boarding had completed, a crew member ended up occupying one of the seats in row 2. Still a very light load in business class today.
Seated in row 1 gave me more knee room, although without the space under the seat available to stretch your legs, the actual legroom feels about the same. The tray table is in the armrest, which I don’t mind as you can fold it out half way to make a small cocktail table instead of the full width. Row 1 is probably the most comfortable seat on the plane and is also served first by the crew when the cabin service commences.

Air France provide inflight WiFi onboard with packages available for streaming or just messaging. I decided against shelling out more Euros for the ability to get online. To assist in differentiating the product from economy, it would be nice if they gave business class passengers a voucher for free access. Alas this wasn’t the case so I spent the flight listening to tunes and drinking away at that free flowing champagne. 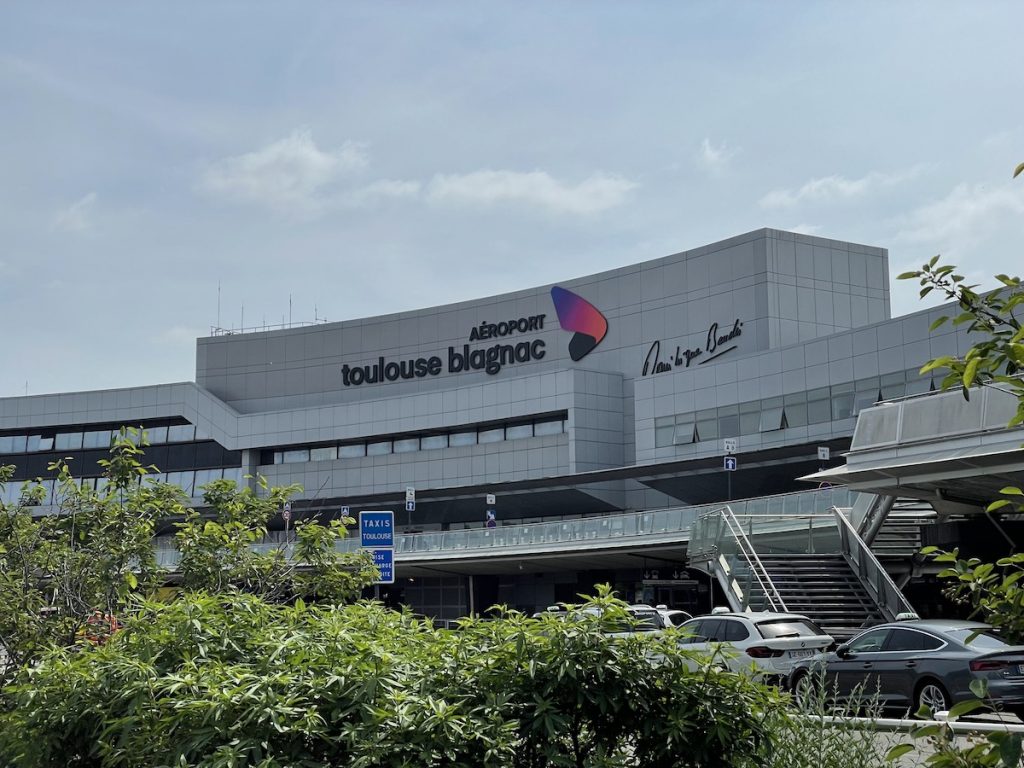 As we began our approach into Toulouse the cloud cover lifted to reveal a patchwork of green and straw fields below. The countryside around Toulouse looked beautiful with little villages breaking up the somewhat manicured looking landscape. Toulouse is one of Airbus’s manufacturing sites so I was keen to see the factory on approach. Landing onto runway 14R and sitting on the left of the aircraft meant I missed seeing the delivery line, but saw some hangers and the terminal as we landed.
Once on the ground it was a short taxi to the gate where I was the first off the aircraft. I was first off the aircraft and began a long walk though several baggage halls where bags had just started coming out as I arrived. The terminal is connected to the city by both trams and an express bus service. I opted for the express bus and about 25minutes later I was in the centre of Toulouse, snacking away on my goodie bag from the flight.

What did I think?

While I had the seat next to me vacant and I got through a large amount of champagne, I’m not sure that would warrant buying this product if it wasn’t part of a connection. The lack of any food of substance onboard or really anything other than champagne makes it very hard to feel like you’re in business class. It feels very much like an economy product.
I can see why Air France would want to offer domestic business class connections. It’s just very unfortunate that other than the name, the product doesn’t have any of the hallmarks of business class. Not the seat, not the food and not even complimentary WiFi. The only benefit really was the lounge access before the flight which I do consider made me feel less bad about spending the money to upgrade. If you had connected to this from a long haul flight, you’d feel like you had been downgraded to economy.
While I was glad I gave it a go, I wouldn’t rush back to spending the extra Euro’s to fly domestic business class with Air France again, unless the price difference is about the cost of a bottle of champagne. Currently the price differential on the domestic only segment is about €200, meaning I wouldn’t recommend this product for just a domestic flight.
If you’ve enjoyed this blog, head over to my channel on YouTube to watch the video version of this review.
(Visited 76 times, 1 visits today)