Terminal: I rarely ever use online check in for international flights as I like the look of the airline issued boarding passes in my travel wallet rather than a printed piece of A4 paper, however my excitement for travels was overwhelming during my last day in the office so I decided to give it a go. Melbourne isn’t equipped apparently to issue electronic boarding passes, so with my two printed passes my friend kindly dropped me to the airport where I quickly joined the Premium Economy check in lane (it was shorter and moving faster than the business lane which I could have used with my frequent flyer card) and within a few minutes had my bag checked all the way to Paris, was given an express card for immigration/security and even had a set of real boarding passes reprinted by the agent.

The express path really does speed up the process at Melbourne with express paths for both security and immigration clearance making the experience much faster. Once airside I quickly stopped to buy a travel adaptor in duty free, during which I noticed the person in front of me was getting a discounted price. I figured there was no harm in asking if I could have a discount too, 20% off later and now I’m a temporary member of airline crew – score!

I had been given mixed reviews about the Cathay Lounge at Melbourne with many people suggesting that I skip it entirely and head to the Malaysian Lounge instead. I’ll add an InLounge review about it shortly, however in short, I decided to give it a go and although it is small and cosy it wasn’t that packed tonight and thus was comfortable enough for the wait for the flight. Sure it’s no Qantas first lounge but given that closes around 17:30 the Cathay Lounge did the job. 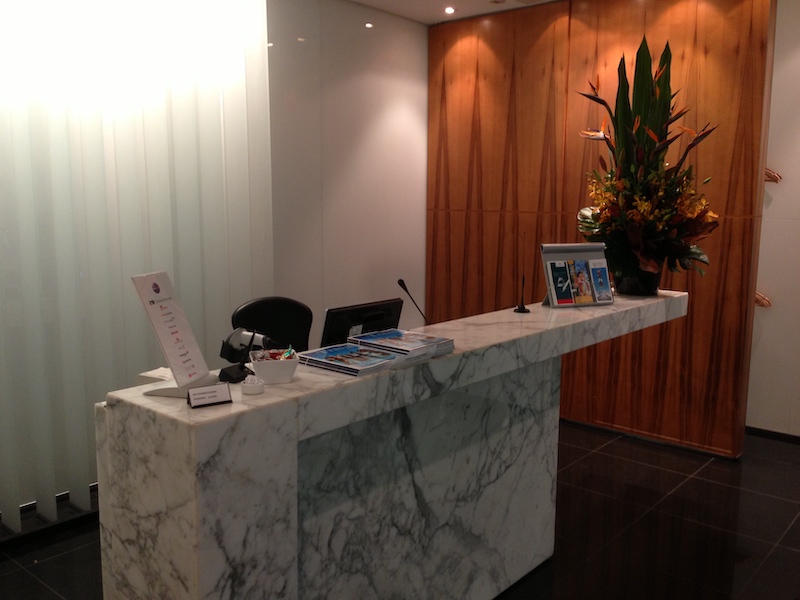 Departure: Most of my international flights out of Melbourne have been either early morning or day flights so the 23:45 departure time was something different for me. Board was called about 45mins before departure, and the business class line made boarding easy. Unfortunately this was only available to me due to my OneWorls status, with general Premium Economy passengers having to use the longer economy queue. With only about 30ish seats on board a premium economy boarding lane would be a great added benefit Cathay could consider. 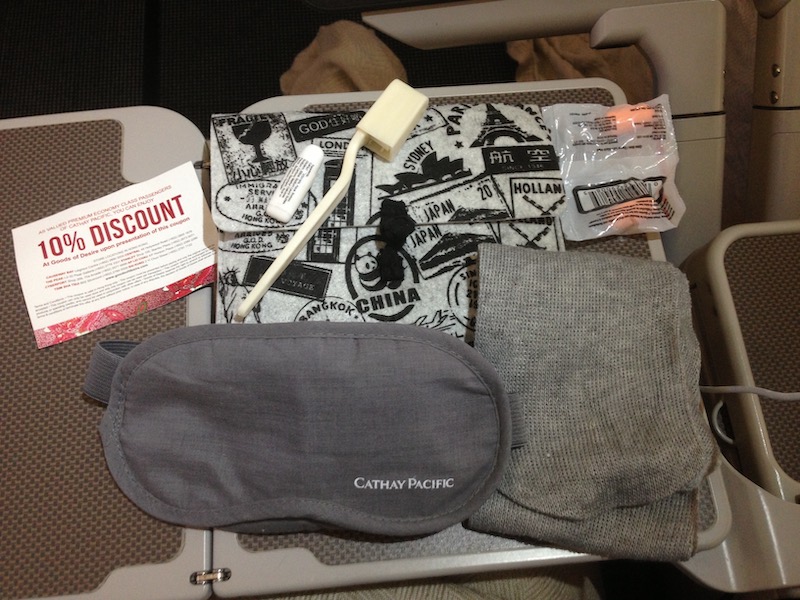 Noise cancelling headsets, an amenity kit and an upsized economy blanket and pillow were waiting on each premium economy seat on boarding, before the crew came around the cabin offering juice water or champagne before take off. The overhead bin space available was also a noticeable improvement to economy with plenty of bin storage space available. Sipping on the glass of champagne filled the few minutes while I waited for the remaining economy passenger to board before almost right in schedule we pushed back, taxied and climbed out of Melbourne for the overnight flight to Hong Kong. 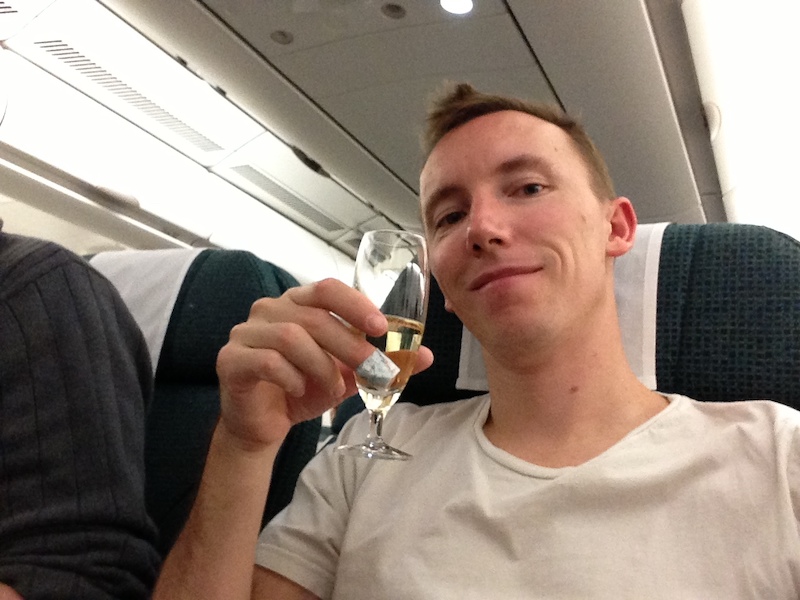 Seat: Premium economy seats are configured in a 2-3-2 layout on the A330 that runs this sector with the first row of premium economy, row 30 having an amazing amount between it and the bulkhead behind business class. Each seat in this row has IFE and tray tables in the armrest, which potentially reduce the width of the seat a little compared to the rest but they have the benefit of a fold out leg rest which the other rows do not have. You can find the exact measurements somewhere online for yourself but the seat feels really quite comfortable, with soft padding a decent recline and an adjustable headrest making the seat feel much more comfortable than the standard economy seat. It’s a good fit between economy and business, I don’t think it would cannibalise Cathay’s amazing looking business product, but definitely an affordable upgrade from economy. 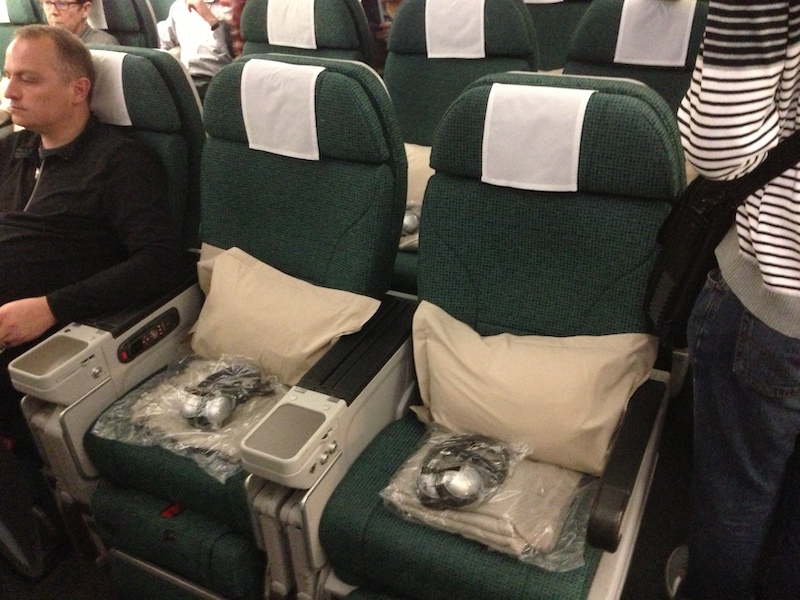 Aircraft: Airbus A330-300. I’m not sure how new the fit out of the premium economy cabin is in this bird but she looks extremely fresh so it’s either relatively new or has been maintained pretty well. Walking through the business cabin while boarding is always a tease however the premium economy cabin looks quite private and cosy compared to the larger two economy sections behind. The premium economy cabin doesn’t have it’s own toilets, which is a bit of a downside, however the toilets in economy are kept really clean during the flight and the wait wasn’t bad long considering there are four toilets for 200people. 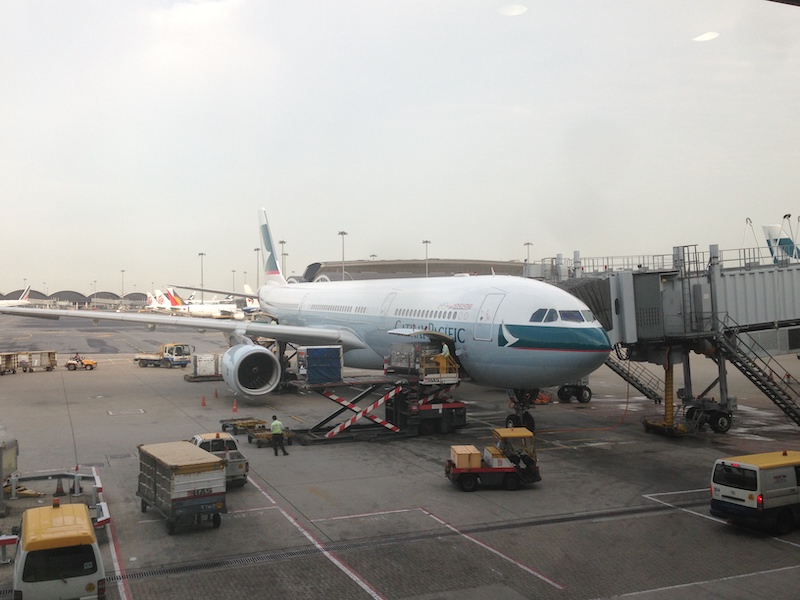 IFE: In the first row of premium economy (and presumably economy as well) the IFE monitor stows in the armrest which has its own pros and cons. The pro’s being that you can sometimes get a better viewing angle while reclining however the con being its not available during take off and landing. Unfortunately the locking mechanism on mine was a tad faulty, meaning every now and then it would just fall to the ground (or just land on my legs). 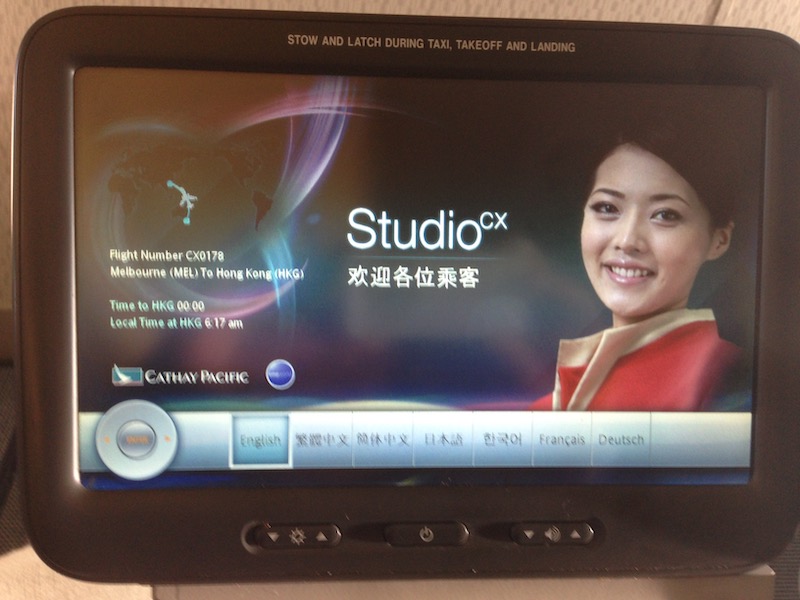 The range of content was pretty good, with the usual array of movies, TV shows, documentaries, games etc available and the interface is really easy to navigate either using the handheld controller or using the touch screen. I really like the ability to make a track list of your own, which it remembers and plays as background music while you navigate other menus. If the content isn’t what you are after you can dock your iDevice with the system using a special cable but I didn’t give this a try as, for the first time in a very long while I didn’t actually use the IFE that much at all, and instead either slept or ate during the overnight flight. This isn’t so much a criticism of the IFE but more so if the comfortable seat that allowed even this insomniac to sleep. The noise cancelling headset, while not the best on the market makes a notable difference in reducing the background hum of this relatively quiet A330.

Each seat is also equipped with a universal power point and USB charging slot which makes keeping all your devices fully charged for arrival really handy. 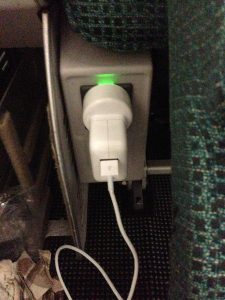 Despite being full from dinner, I opted for the beef which each main also being served with shaved ham and a chunky potato salad. I also had a glass of the Riesling and a Gin and Orange juice with the meal, which is probably the reason why I missed the desert which was listed to be a mango Weiss bar, as the next thing I knew it was about 5 hours later and I was waking up from a decent snooze. The crew had cleaned up my table without waking me – good effort as I’m a very light sleeper. The crew apologised during the breakfast service for not bringing me a peppermint tea after the dinner service as they didn’t want to wake me up – very sweet of them! 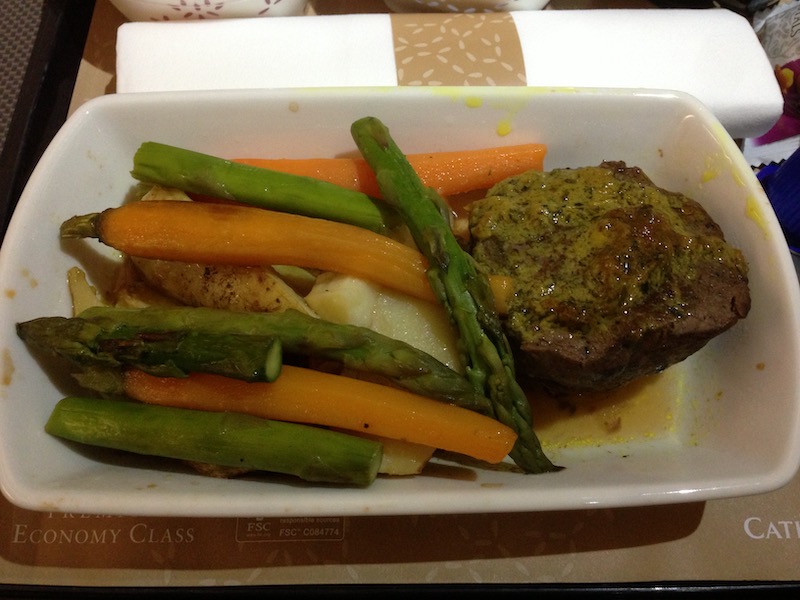 Breakfast was served about 1:30 before landing which was not too early, and two main choices were again offered being the usual eggs, bacon and random sausage or a chicken and mushroom congee. I went the egg option and unfortunately this time the eggs were really ordinary. The accompanying fruit, yoghurt and croissant were however more than enough for a breakfast. 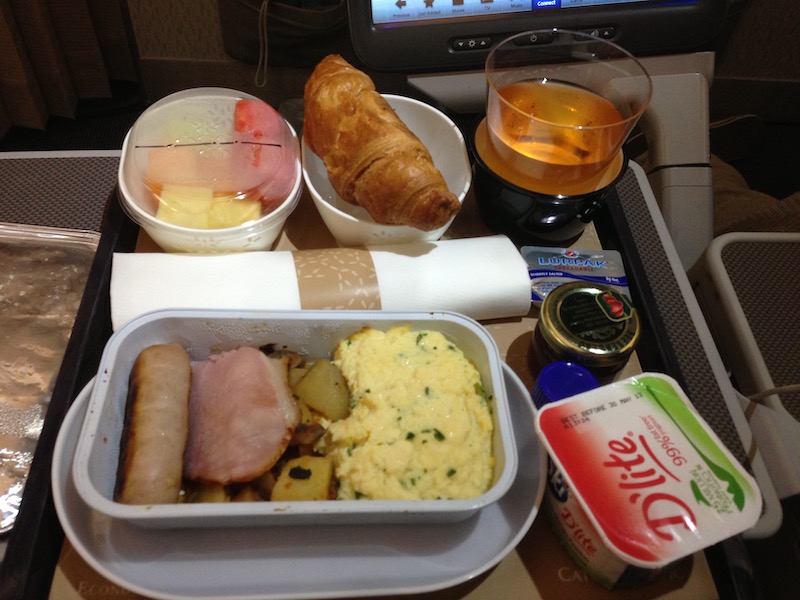 Arrival: Despite turbulence being advertised by the crew during the preflight chat from the captain none eventuated and the landing into Hong Kong was smooth and perfectly on time. Having a 17 hour gap between flights I decided to head into Hong Kong for the day so headed for immigration clearance. Within minutes of jointing the very short immigration line I was literally on the other side of Customs and ready to catch a train into town! An amazingly fast airport experience! 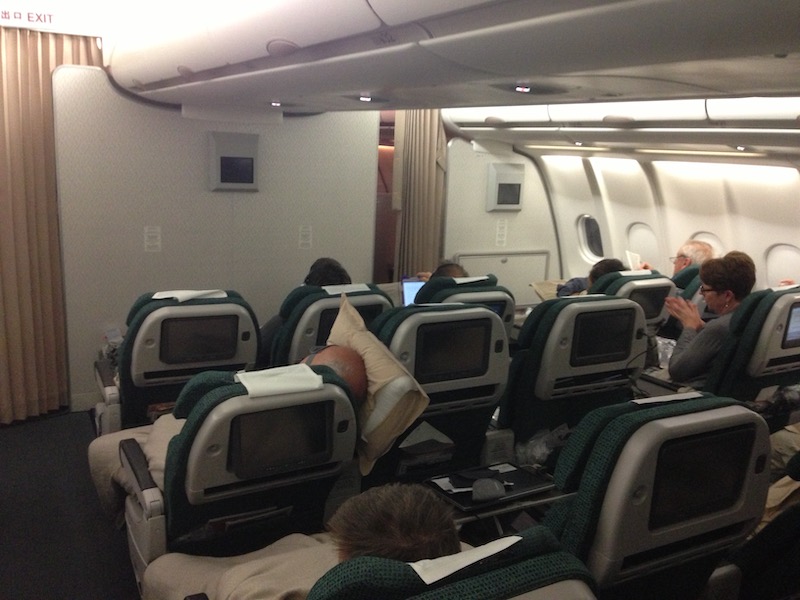 Crew: Faultless service by the crew as you would expect when flying with Cathay Pacific. I’ve flown Cathay in business before and the staff today in premium economy provided the same level of professionalism in this cabin. Cathay advertise one crew member dedicated to the cabin, however it seemed the meal services started on both aisles with staff from economy helping before the trolleys headed backwards to the main cabin.

Overall: I was really quite impressed with my first Premium economy experience. I think it provides a good value for money proposition and provides a noticeable increase in comfort, space and service from economy. I think you can judge the success of a flight by how you feel when you arrive at your destination. Despite being an overnight flight which I generally struggle to sleep on, I got a decent block of sleep and arrived fresh and ready for a day long stopover exploring Hong Kong. All in all a great first experience, and something I’d definitely recommend. Well done Cathay Pacific.

Hope you enjoyed this review, apologies if the images are a little lower quality than previously or if there are a few typos, this was my first blog attempt using only mobile devices (iPhone, iPad). It saved some time so will see how it turns out. Enjoy and keep up to date on my twitter @carlousmoochous