Yesterday I flew from Melbourne to Heathrow to commence a few weeks holiday in Spain and France. It was almost $1000 cheaper to spend a night in London than book the journey on the one ticket, so I stayed at the Sheraton Heathrow, caught up on some sleep and was ready for the third and final leg before starting a long awaiting holiday. My alarm sprung into action at 4:10am and despite Uber being unable to match me to a ride, the trusty red TFL buses took me to the airport with plenty of time to check in. Join me on this short EuroTraveller flight on board British Airways from Heathrow down to Gibraltar. 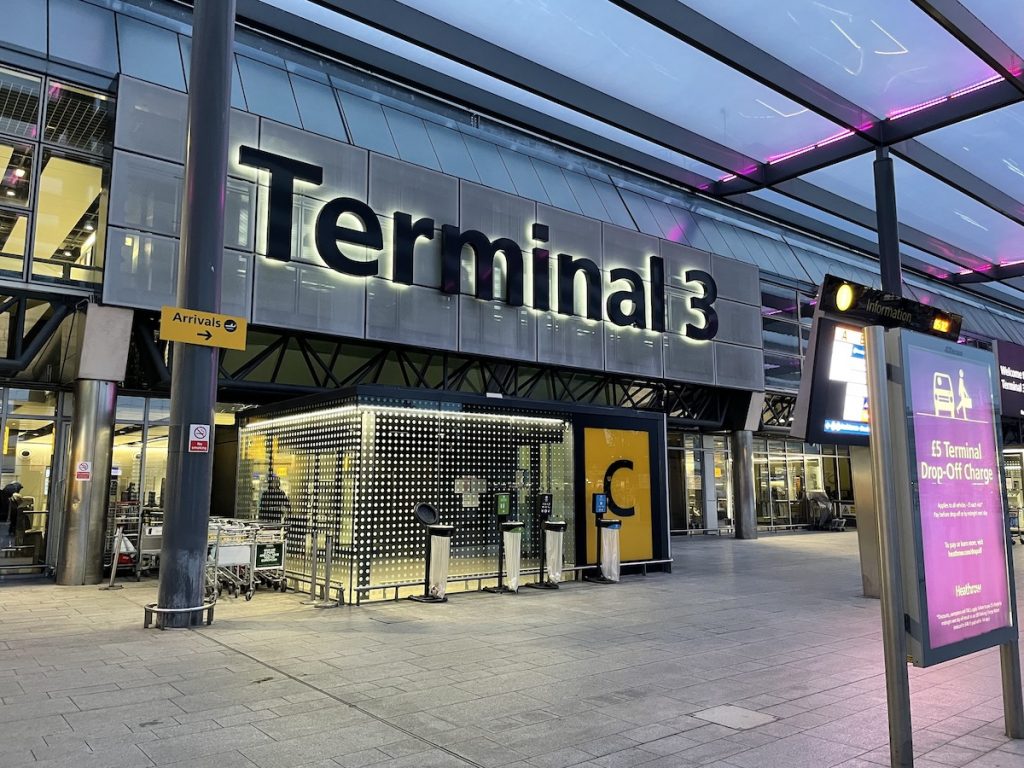 Unlike most BA flights that depart from BA’s home in terminal 5, the flight to Gibraltar departs from terminal 3. While it’s not as flash as the first premium check in area in T5, there was no queue for check in and fast track security was pretty speedy. Frustratingly, I ended up looping around the loop of a duty free maze that is T3 at Heathrow before finding my way towards the boarding gates. Once I found my way out, the BA Galleries First lounge is one of the closest lounges. The Qantas lounge is closer, but unfortunately the Qantas lounge wasn’t open yet as QF1 was yet to arrive from Sydney this morning.
Apart from the benefits of flying a Oneworld carrier, British Airways are the only airline to fly to Gibraltar from Heathrow, and I didn’t fancy adding a trek across London to get to Gatwick. Easy jet are the only other carrier to fly to Gibraltar with flights from Gatwick and Manchester. Terminal three is home to quite a few Oneworld carriers including Cathay Pacific, Finnair and Qantas as well as British Airways flights. It’s also home to Virgin Atlantic and Emirates has quite the presence here with board from the lounge gates for its very frequent A380 flights to Dubai. 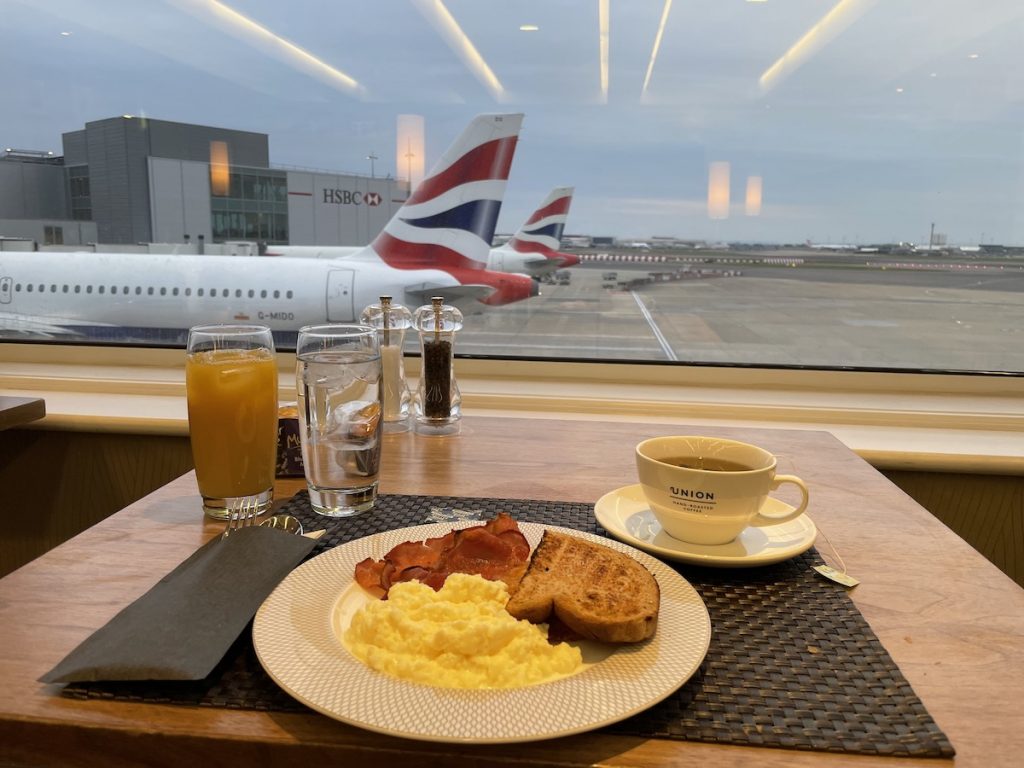 British Airways offer two lounges in Terminal 3: The Galleries lounge and the First class lounge. I’ve used the Galleries lounge last year while the Qantas lounge was closed before flying back to Australia so this is my first visit to this British Airways lounge. I’m on just the third BA flight out of T3 this morning. As such, the first lounge was pretty quiet. The lounge is divided into a series of zones with bar like seating at one end, more casual in the middle and a dining room at the far end of the lounge. I took a seat in the dining room and ordered scrambled eggs, bacon and a hash brown on toast. It arrived quickly with an orange juice as I made a cup of peppermint tea.
Eating breakfast overlooking the waiting BA aircraft and watching the first arrivals of the morning land was a nice way to start the day. The champagne bar was also open offering a few varieties of bubbles, but I decided to skip the champagne breakfast today. The lounge experience isn’t the Qantas or Emirates First lounge experience, but is pretty nice for prior to a short flight. BA directs its actual first passengers to the concord room, so this lounge is really aimed at top tier frequent flyers instead of passengers actually flying first. 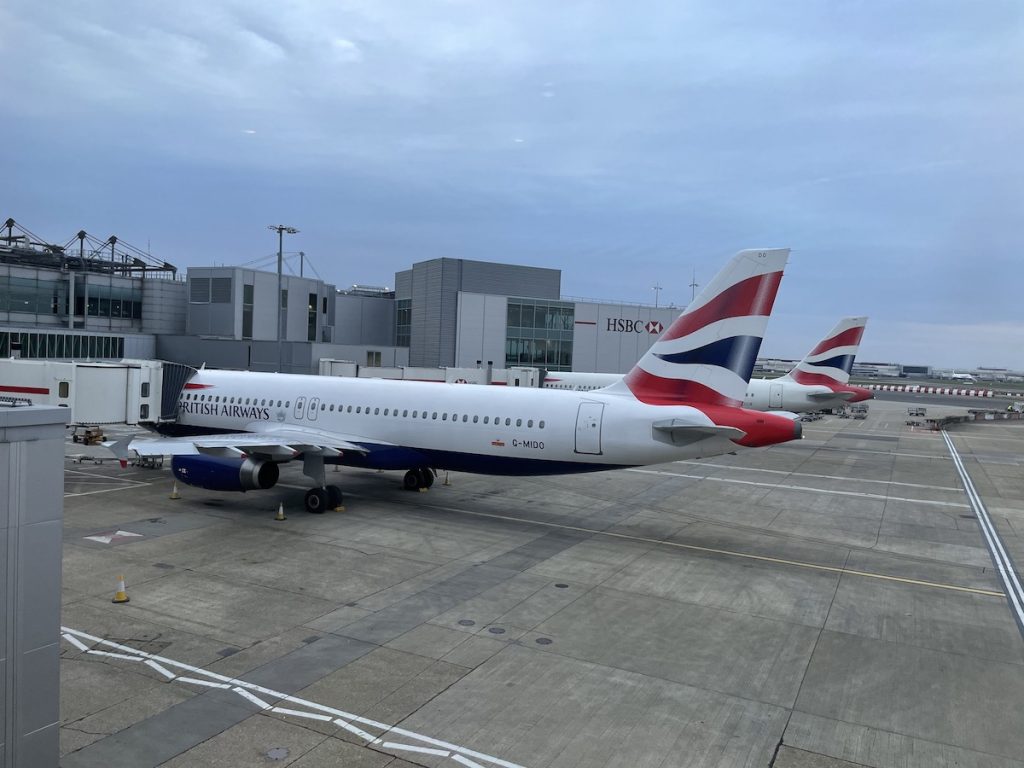 The departure gate was next to the Qantas lounge, which was opening as I went to board. Boarding passes were scanned and passports were checked before entering the small holding room prior to boarding commencing. BA board passengers in group and my Oneworld emerald allowed my to board in group 1, just after the families of small children board. At the aircraft door the crew offer sanitising wipes, reminding us we’re still in a pandemic. Masks are no longer required on BA flights so it was different to see their faces again. Less than 1/3 of passengers chose to wear a mask – a sign of the different approach in the UK compared to what I’m used to. Boarding was completed quickly and we were closed up for an on time departure. 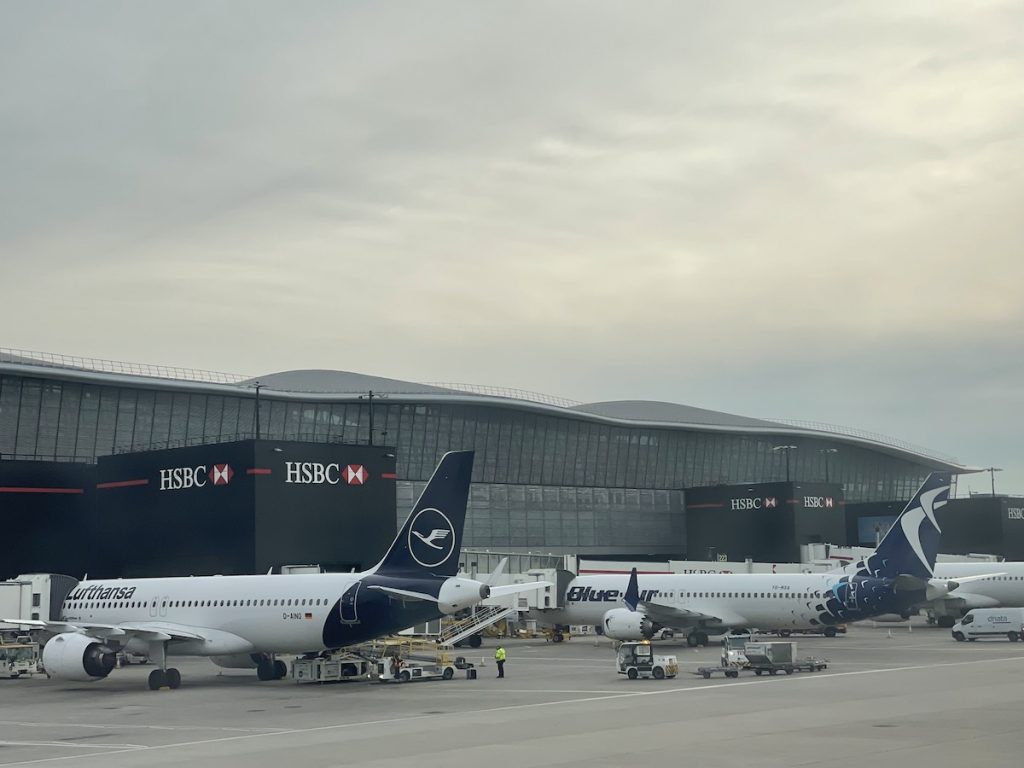 The taxi to the runway took us past terminal 2, slowly plodding along behind another BA A320 being towed. I love taxing at big airports like Heathrow that have a diverse range of airlines and liveries to look at. Once we overtook the aircraft under tow, we raced for the runway. We took off quickly to the west and climbed above the clouds before heading across the English Channel, over the bay of Biscay and then across Spain. About an hour before landing we passed Madrid before continuing across Spain. I was hoping for an easterly take off to get views over London but instead had views of the English countryside. 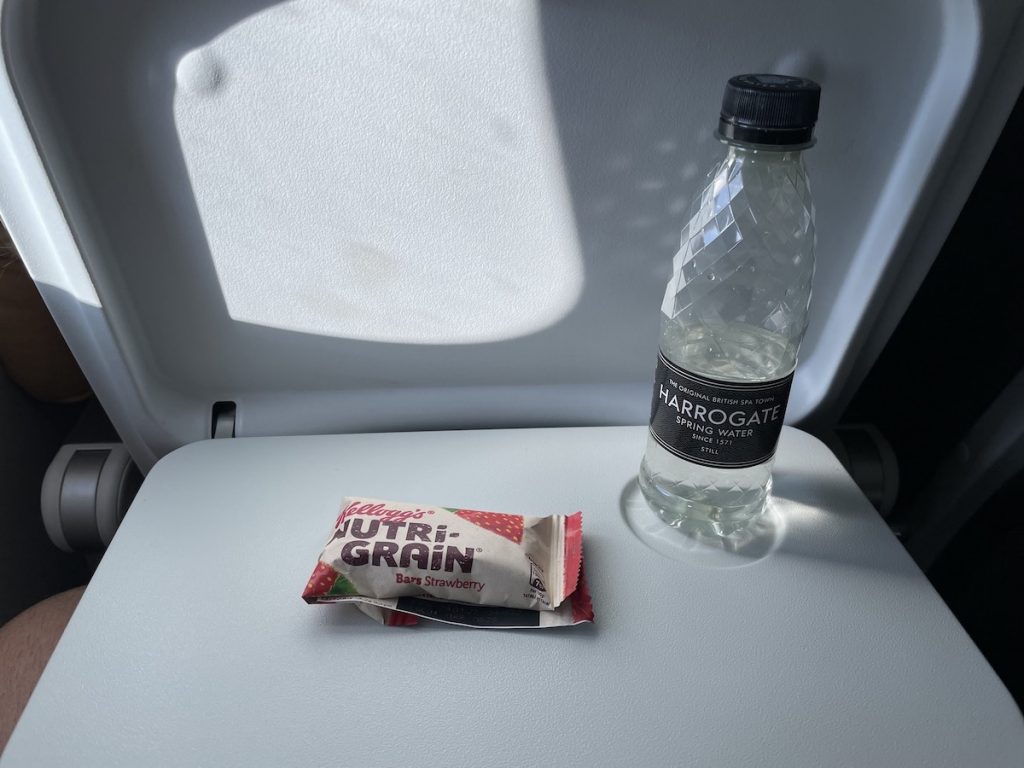 A complimentary snack service was offered shortly after take off. I understand that this was added to the offering during the pandemic and has been continued. On todays flight a strawberry Nutri-grain bar and bottle of Harrogate spring water was offered. I took a bite of the bar before realising the main ingredient was apple (awkward for a fructose intolerant traveller). On the bright side, at least I got to taste it for the review. It was average and I would have much preferred the sea salt chips I got on a previous BA flight.
While there is a complimentary snack service, a buy on board menu is also offered. I preordered a scone set the day before my flight from the Speedbird Cafe. The pre order promises delivery at your seat when ordering. There is a limited subset of the Speedbird menu also available onboard, with in seat ordering via the wifi portal. Despite announcing that pre orders were served first, to begin with the crew seem to just deliver from front to rear.
My afternoon tea set arrived in a cute little ‘A very British afternoon tea’ box set. Inside was a single scone with a two small jars: one of jam and one of clotted cream. It also came with the worlds smallest knife to serve. It was delicious. Previously I’ve been against the buy on board concept, but it’s growing on me when it’s in addition to a free snack. It allows for a wider selection and options to suit different tastes; whether that be a morning G&T or a cup of tea. My purchase set me back £7 including a can of coke (to aid my jet lagged state). The crew continued to offer buy on board through the whole flight, with quite a few G&T’s and wines passing me as fellow passengers began their holidays early. 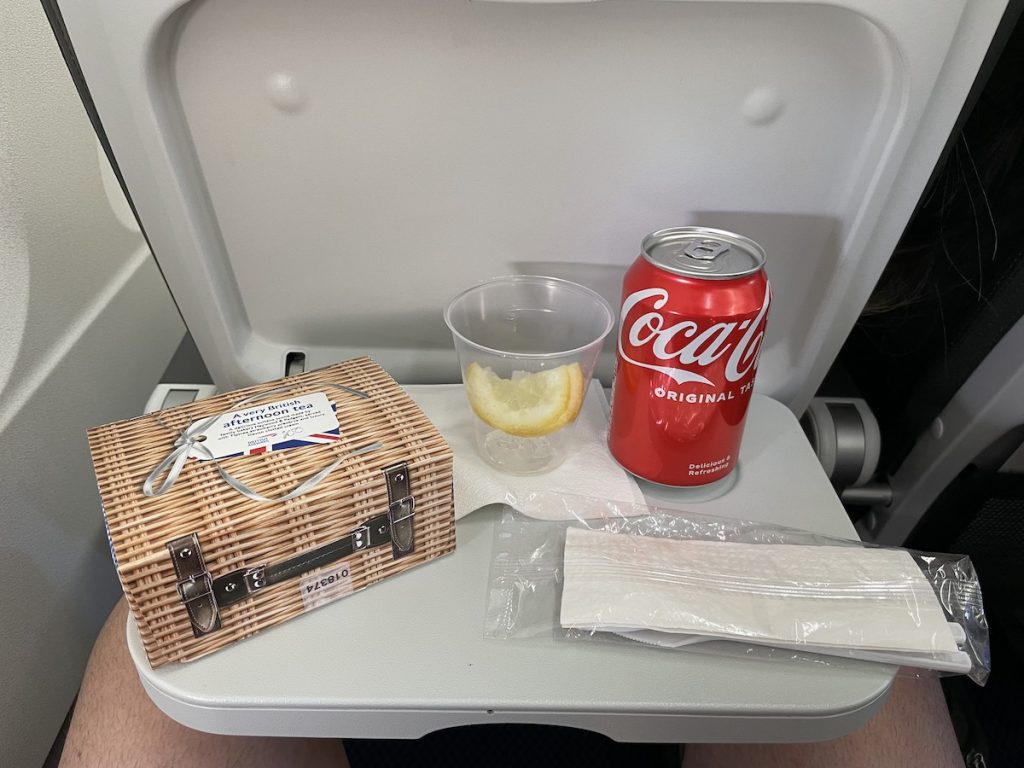 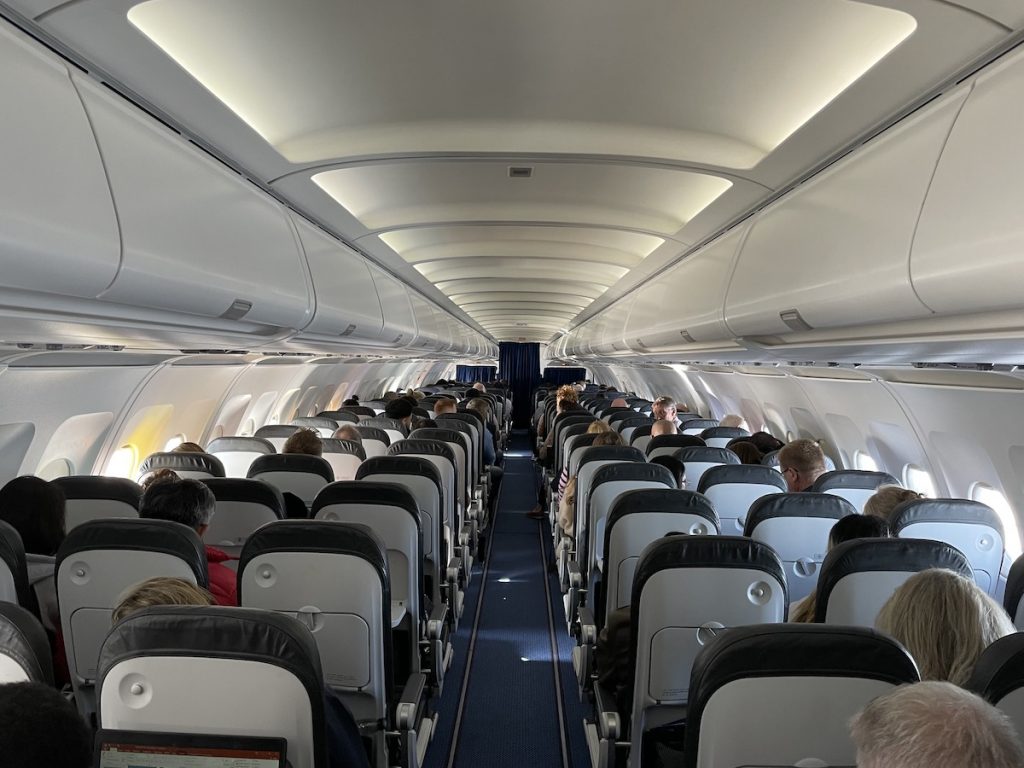 The A320 cabin is laid out in a 3-3 seating configuration from nose to tail. There is a ClubEurope cabin in the front of the plane with middle seats blocked for business passengers. The main cabin seats are a slim line  black leather covered seat. They have  little padding, especially on the seat back and do not decline. A small tray table folds down from the seat in front and there is a seat pocket with safety card and barf bag in each seat. In my row the middle seat was showing as blocked allowing pretty much the same seating config as business class. I was tempted to upgrade prior to the flight but at 175 pounds I decided against it. I was glad I made that choice as I effectively had the same seat as I would have for 175 pounds less.
The legroom is reasonable even with my bag under the seat in front. The middle arm rest folds up allowing more room to stretch out. With the middle seat empty I felt quite comfortable. On a recent flight from Prague to London the middle seat was full and even then it didn’t feel overly cramped. The cabin does have an LCC feel about it with nothing premium to suggest you’re flying on a legacy carrier. 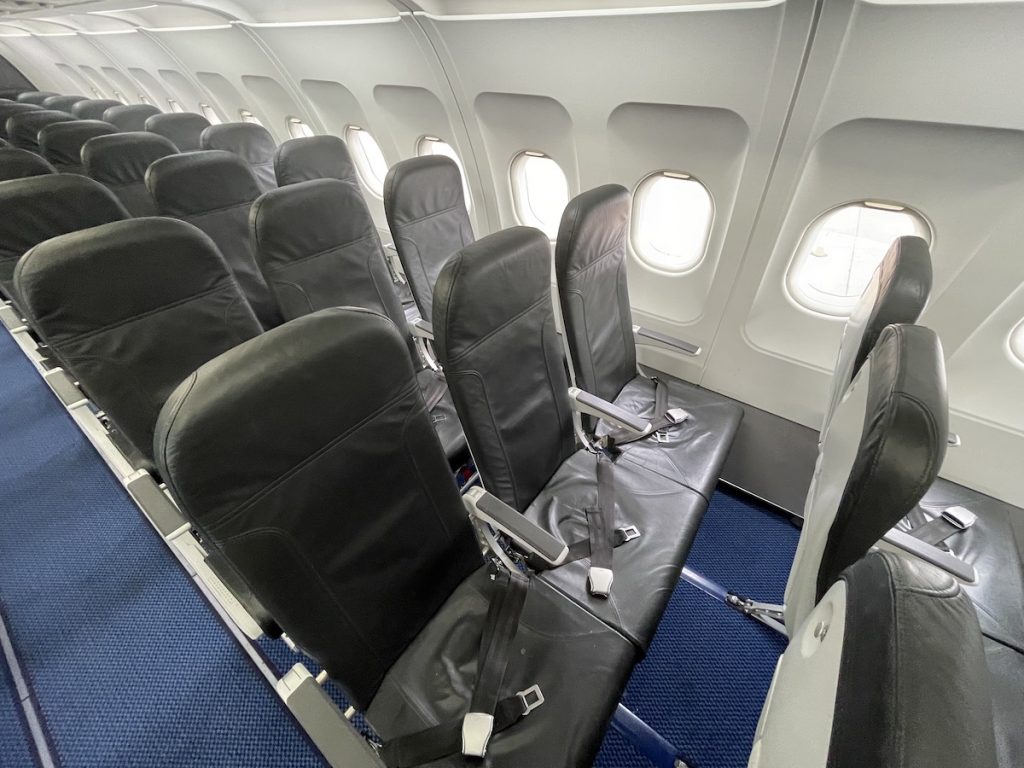 Wifi is offered on board in two packages: ‘Browse and Stream’ or ‘Messaging’. The latter offers what it says (without any attachments) for £2.99 for the full flight. To do anything more you need the bigger package for £4.99 for an hour or £8.99 for the full flight. While WiFi was available at the start of the flight, by the time I went to join it had cut out so I didn’t bother trying it. While I’d liked to have streamed something, I think it’s a bit pricey for a short flight. The crew mentioned that power would be available after take off, but I couldn’t locate the socket. 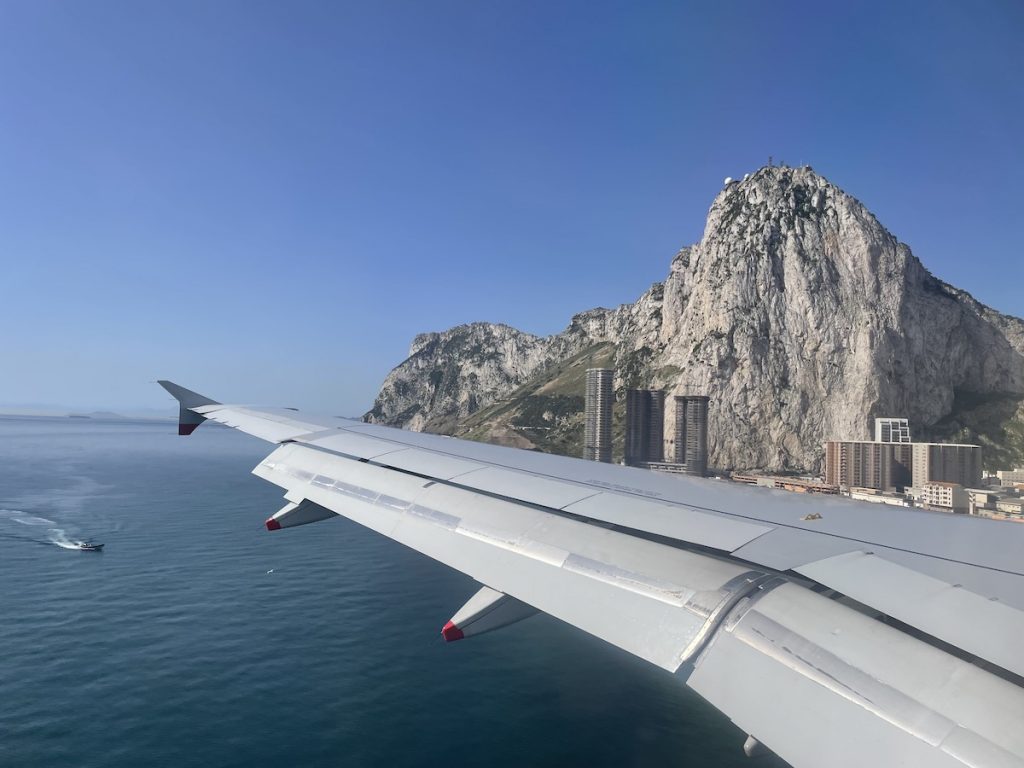 I’d picked (and paid for) a window seat on the left of the aircraft to try and get a view of the rock on approach. I’d been watching flights over the preceding weeks and thought this was the correct side for the best view. About 20mins before landing the captain advised we were on decent and expected a landing and arrival at the gate 10mins before schedule. In his weather update he reported a 17 degree arrival temp and a light westerly wind. I crossed my fingers and hoped this meant my seat selecting was correct. I was right.
The approach over the Mediterranean to the west of Gibraltar gives the best view of the sheer drop of the cliff face of the rock of Gibraltar. I filmed the approach using my new GoPro and will upload the footage and full vlog review to YouTube once I get time to do the edit. This is up there with one of the most scenic approaches I’ve flown into (sure Sydney is stunning, but I think this ticks a few more #avgeek boxes). After landing we turn around and back track to the terminal. One of the unique features of Gibraltar airport is that the only road in and out of Gibraltar crosses the runway. Traffic and pedestrians are stopped from crossing while flights come and go, so our taxi today crossed the road with cars and people waiting for us to be able to get into (or out of) Gibraltar. 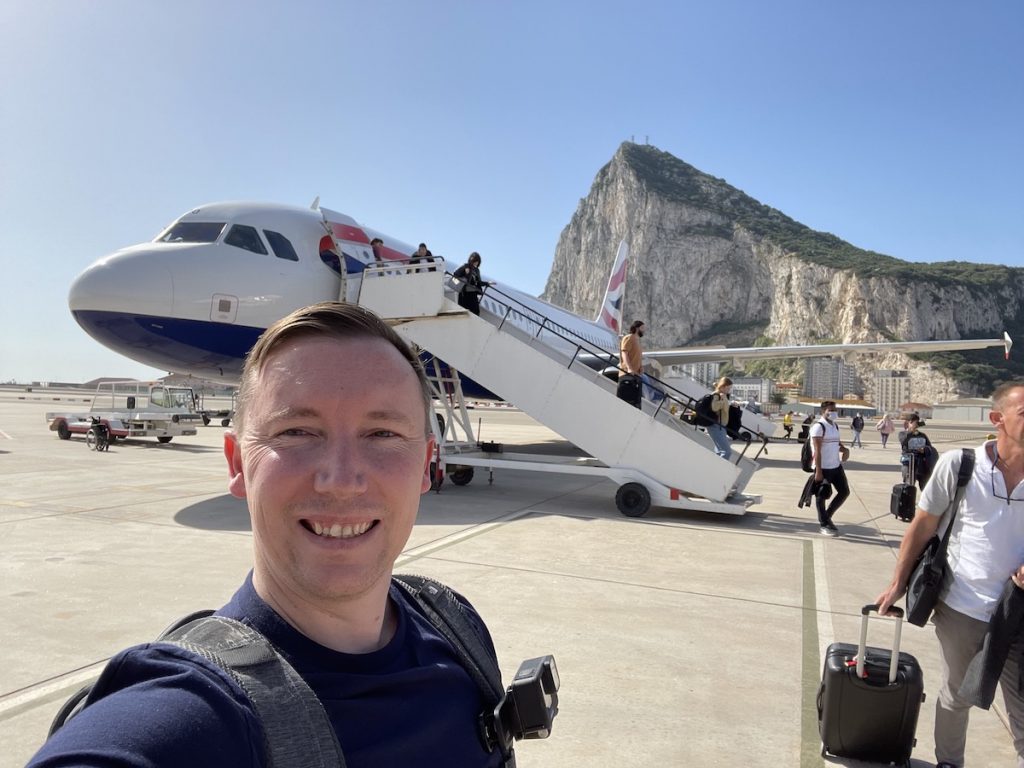 Despite Gibraltar being a part of the UK and this flight coming from London, there is passport control on arrival. UK and EU citizens are waved through after a quick glance at their passports. All other countries, including me on my Australian passport require a stamp to enter Gibraltar. As such, I’m adding Gibraltar to the list of countries I’ve now visited. Baggage claim is a simple yet streamlined affair before walking out into the arrivals hall and finding my way to my hotel.
Overall the flight was pretty good for an economy service, notably because of the good pre departure lounge experience. I think the buy on board menu also helped make the flight more enjoyable and made the journey fly by as I ate my way across Spain. I would have liked to use the WiFi to stream some shows but writing this blog post was just as enjoyable. The approach and landing into Gibraltar was spectacular for those, like me, who are seated on the left hand side of the aircraft making it a must do flight for any true aviation geek. I’ll post a blog on my amazing day in Gibraltar soon but this brings us to the end of this flight review.

If you liked the review above, check out my YouTube version of this flight review.