Welcome to the first InFlight Flight Review for 2014 on CarlousMoochous.com . I’m trying something new for 2014 by including a short video review for one flight review each month.  Given this is something new for me, I thought why not try it out on JetStar’s new Boeing 787! So here it is, the first video flight review! Now you can enjoy the video and the full text review below. Enjoy.

Class: Economy in a business Seat

Terminal: I haven’t been this excited to be flying for quite a while but the prospect of being on a new 787 was definitely worth the 345am wake up! JetStar operate out of the Qantas terminal however unlike the A320 operations this 787 service operated from Gate 11, probably due to its size. Arriving before 5am I took a quick walk down to the gate to take a few avgeek snaps while many more traditional JetStar passengers slept by the gate. How you could sleep when there’s a new plane sitting right in front of you is beyond me! As 5am rolled by the Qantas lounges opened which is where I relaxed, had breakfast and took a few more Tarmac photos from before boarding commenced at 530am.

The boarding line weaves it way around the end of the concourse as everyone scans their passes and boards this shiny new aircraft. Board is completed relatively quickly as the aircraft is definitely undersold for this morning flight (probably in case they had to swap the 787 out with an A320 at the last minute). Once in board I make the left hand turn and head into the small business cabin.

Departure: A small paperwork mix up resulted in a 10min delay to departure however the captain advised that a strong tailwind would blow us up to Cairns for an early arrival. After a very short taxi the GE Nextel engines powered up and we took off to the west. The engine noise is considerably quieter on the 787 compared to other aircraft around this size however the air conditioning has a high pitch squeal which was persistent during the flight. 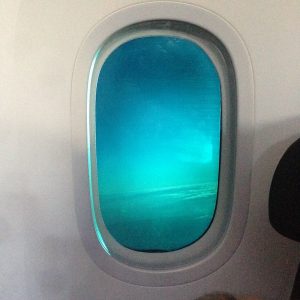 We burst through a layer of cloud and slight rain shower to reveal a beautiful day for flying above the clouds. A few turns to the north and we were on a pretty much straight line course for Cairns.

Seat: 1J. During these 787 run in domestic flights all seats are sold as economy, however once these birds start stretching their wings the aircraft will be sold as 2 cabins. Fortunately for me, this allowed me to try out the business class seating at economy prices. If we are being honest, business class is a bit of a stretch for the naming of these seats as they are what premium carriers would call premium economy seats. None the low cost carrier calls these business class so that’s what we’ll run with for this flight. 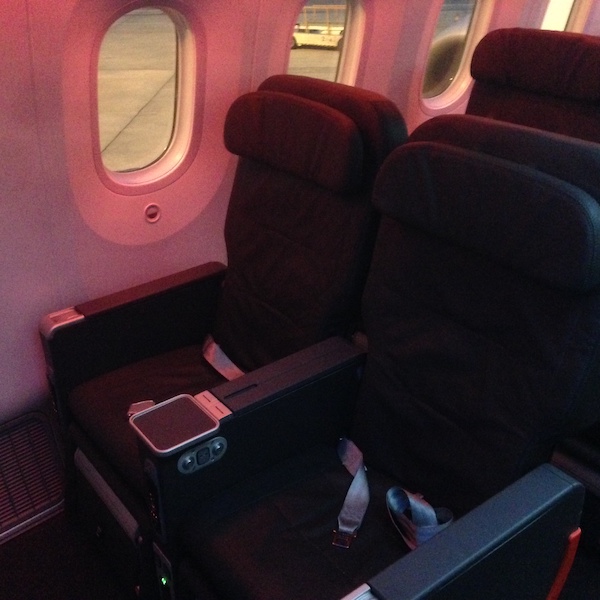 The factory fresh leather seats boast 38inches of legroom however row 1 probably gives you a little more due to the bulkhead in front. Each seat reclines considerably when compared to economy however it’s no flat (or angle flat bed). The front row has IFE in the armrest while the remaining rows have it in the seat in front of you. There is an adjustable headrest which folds upwards which I could really understand the purpose for, but it does. 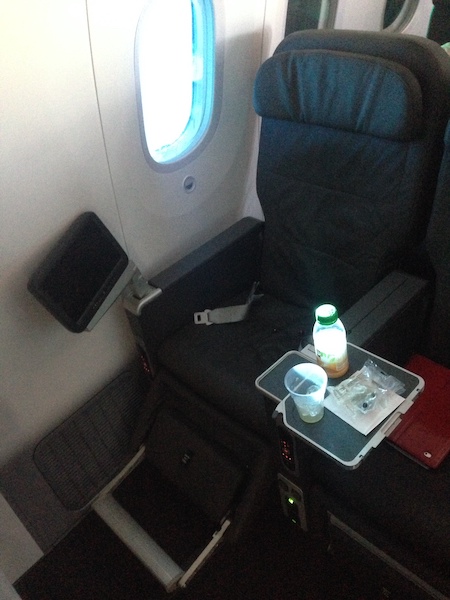 Your meal table is stowed in the centre armrest and when I’m use has the ability to slide further away from you but not closer. I’m nit sure why you’d need it so far away (except for customers of size) as I would have liked to have it a little closer whole writing this review. The table is also quite bouncy with each key press resulting on the table and I pad bouncing up and down which can get annoying if you’re looking to get some work done during the flight. If you balance one side on your knee and press down with your wrists it reduces the bounce but you knee and wrists won’t thank you for it. 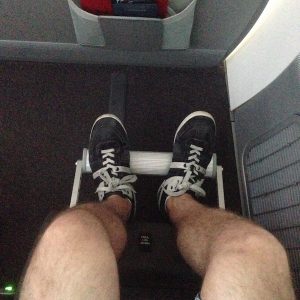 Row 1 has bassinets installed on each side of the cabin so you might find yourself moved (or sitting next to a baby) should you select these rows. There is a window noticeably missing which would have made the space feel much bigger if it were there. Overall tho, the seat is pretty comforts bel for shortish hops however I’m not convinced that it really qualifies as an international business grade seat. 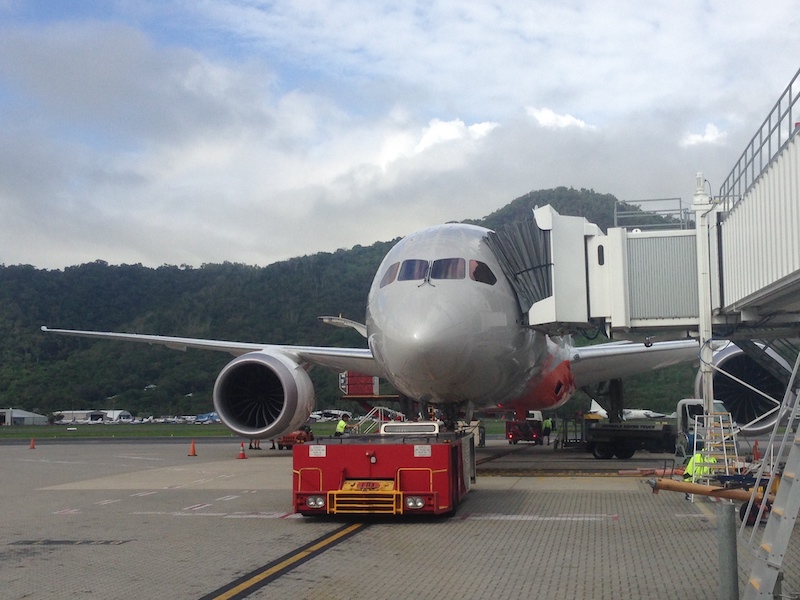 Aircraft:  Boeing 787-8 (VH-VKA). The aircraft was the entire purpose of this flight review and soon the domestic legs will probably return to a320 services so it was good timing to try the bird out before she heads to international routes. The cabin is divided I into 4 main sections with 2 large economy sections at the rear and both a small economy and business cabin to the front. 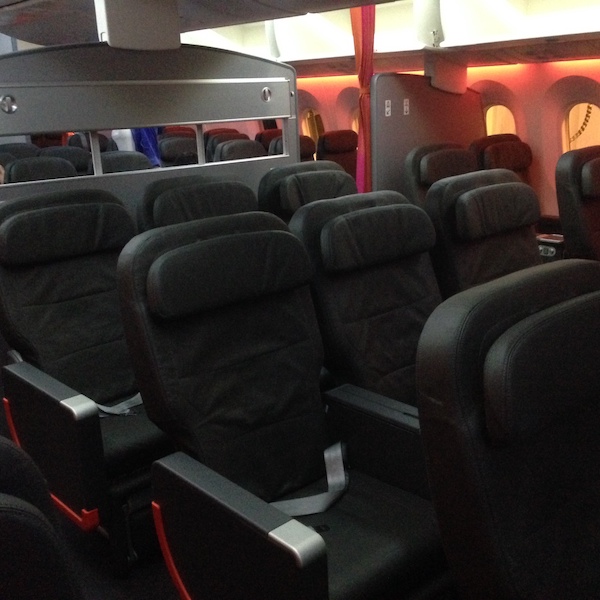 Business class has 21 seats in a 2-3-2 arrangement whereas economy has 314 seats across a 3-3-3 layout. There is a dedicated toilet in the front business cabin and 5 other toilets spread across the economy cabin. Speaking of bathrooms – there’s no more going into the toilet only to find the last person hasn’t flushed. The hands free flush automatically flushes as you close the seat. The taps are also hands free which keeps those airplane germs at bay. 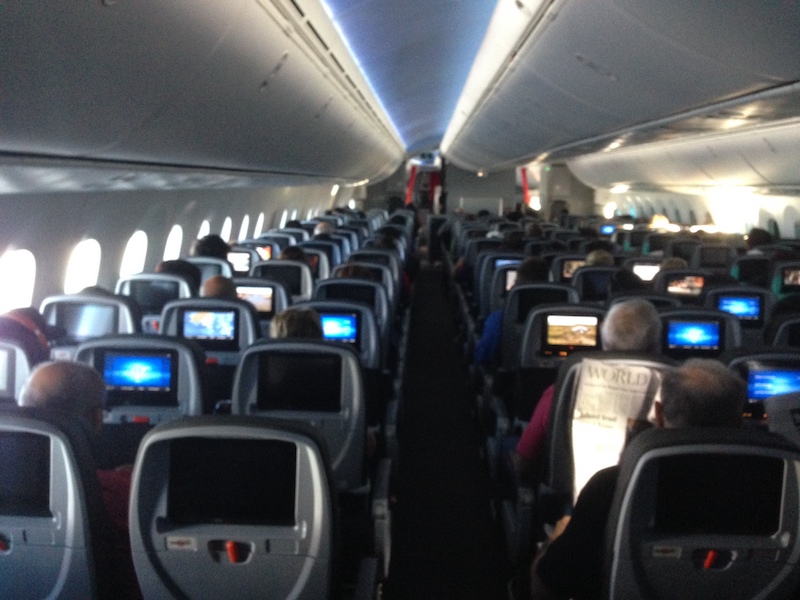 The 777 style interior with large recessed overhead bins make the cabin feel quite spacious and inviting. The panels are lit with LED lighting that is set to. JetStar orange during boarding with soft blue lighting on the roof panelling. A big feature of the 787 is the large windows which are noticeably lacking any shades. Instead each window is electronically controlled and the window can change between transparent and dimmed with the touch of a button. Although this doesn’t block out all the light, it does allow you to see through the window during all stages of flight which is pretty cool. The crew automatically open all windows during decent too. 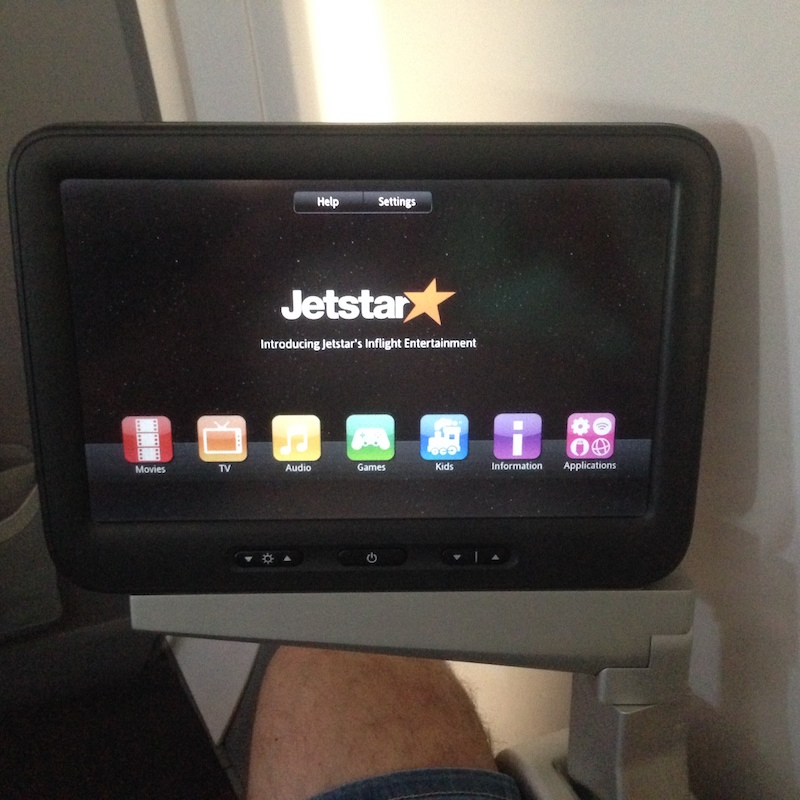 IFE: Row 1 has in arm fold out IFE while the remaining have seat back IFE. For this flight the IFE is free however for most flights you’ll probably need to pay. The screen itself is 10.6″ in business and 9″ in economy and offers a limited selection of TV, Movies and a very limited range of music options. A moving map can be found to track your journey under the ‘Voyager’ option (which is odd considering that’s what rival Virgin Australia call their inflight magazine.

I found the selection pretty limiting so I’d advise to bring your own and use the handy in seat PowerPoint to keep your device charged. You can add your device through the USB plug and connect it to the IFE however I didn’t bother trying this today.

Meal: Literally nothing is provided in economy for free, but with a $5 voucher provided with my booking I got a gluten free cookie and a juice which was enough for the 2hr 45min cruise to Cairns. You can BYO food however nothing hot and no BYO booze. The crew made 2 passes during this flight offering items from the cafe for sale. 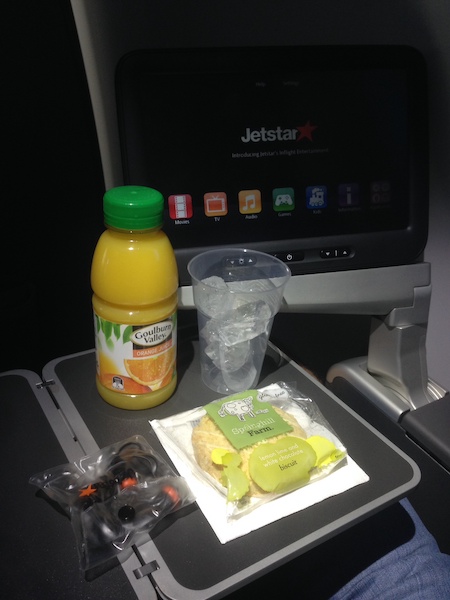 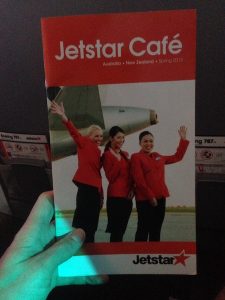 Arrival: After cruising at 43,000ft for most of the journey we descended into the tropical city if Cairns. Passing through several layers of cloud we soon popped beneath the clouds as we crossed the coast and began the approach path into Cairns International Airport. Despite the tropical clouds the approach was smooth, however my first 787 landing was a little rougher than expected as we touched the Cairns runway, applied some reverse thrust and slowed to a casual taxi towards the gate. 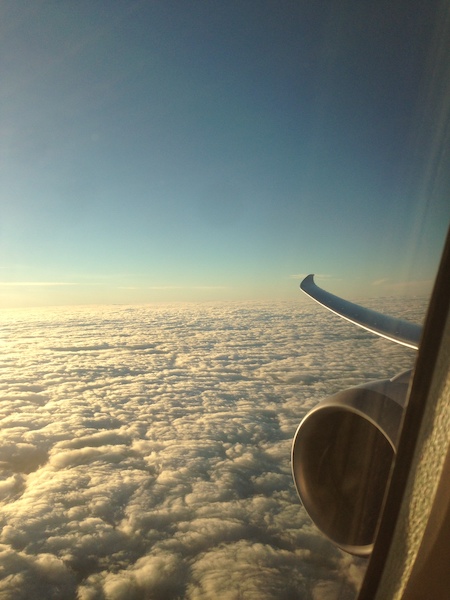 Arriving at the gate the seat belt sign was turned off and passengers began gathering their belongings and getting ready to disembark. Unfortunately it turned out we had stopped about 6 inches too short for the aerobridge to connect to the aircraft. The Captain came on over the PA system and advised that a tug would pull us the last few inches and that all passengers needed to be seated for this last leg. Most passengers took this quite well, with several laughs and jokes about the distance the pilot fell short by. Not to long after everyone was re-seated, the aircraft slowly inched forward, the aerobridge connected and we disembarked for a day in Cairns.

Crew: The crew were really friendly and seemed somewhat excited to be on this flight – perhaps the new aircraft makes the job exciting like it does for me. While I was wondering around the cabin taking photos of everything the crew were friendly and encouraging rather than looking at me as a freak which was nice. It helped a few of the crew were pretty cute and friendly too. Interestingly an engineer was on board today too – presumably just in case while these birds learn to spread thief wings.

Overall: I had a great time trying out the 787 and it’s really got me excited to try one of these on a longer haul sector (perhaps not in economy tho). Despite being a low cost carrier the cabin felt quite spacious and we had a nice smooth flight. A new aircraft is always exciting and I think any new passengers on the 787 will be impressed.