Terminal: Tonight’s flight departed out of Seattle’s SEATAC A concourse so my first mission was to find a lounge to relax in before my flight. Alas there is no Admirals club in Seattle however if you have an admirals club membership you can use the Alaska boardroom lounge. Unfortunately this doesn’t extend to oneworld emeralds or first class passengers so I went hunting for another option. The lady in the Alaska lounge suggested the British Airways lounge in the S concourse, so 2 train rides later I was at the door of the BA terrace lounge, to find it closed. I was disappointed that there was no AA lounge but as their access policy for their own frequent flyers doesn’t provide any access without a further payment I wasn’t totally surprised. Thus it was time to find an airport bar to grab some food and drink before departure. It’s a big airport and there are plenty of bars and restaurants available. 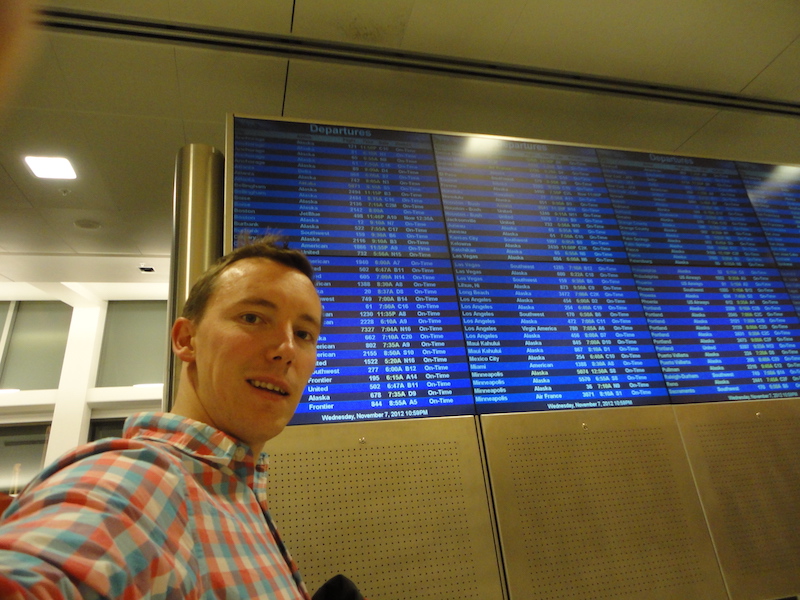 Departure: Boarding commenced a few minutes later than schedule and despite the gate agent requesting that people with larger carry on bags could come and check them for free most decided to take their kitchen sink containing bags on board with them. Not surprisingly on this full flight not all of those bags fitted into the overhead bins or under the seat in front, and thus 15mins post departure time we were still checking the last bag that didn’t fit.

Obviously someone much smarter than me has done the maths but from my perspective the paid for checked luggage doesn’t seem to make sense. An aircraft makes money when it’s in the air and when it’s sitting on the ground it’s just ticking up interest costs and depreciating away. Thus all these delays on the ground due to excessive amounts of carry on seems a very wasteful use of a very expensive asset.

Despite the delay there wasn’t much traffic around at midnight so our taxi to the northern end of the field was pretty fast and before we knew it we were racing along the runway and leaping into the Seattle night sky. Shortly after take off the captain advised us of the route we would be taking and expected weather on arrival in Chicago. He also said he would leave the seat belt light on for the full duration of the red eye flight as he didn’t want to wake people up with the ding of the seatbelt light, which he then proceeded to demonstrate.

Seat: 3F. On boarding I walked down the aisle, counted 3 rows and proceeded to get organized only to discover that I was in seat 5F. Slightly confused I walked the few steps back to the front to discover that the rows start at 3. Trick for new players, there is no rows 1 or 2, thus if you get row 3, you’re up front. Strange! 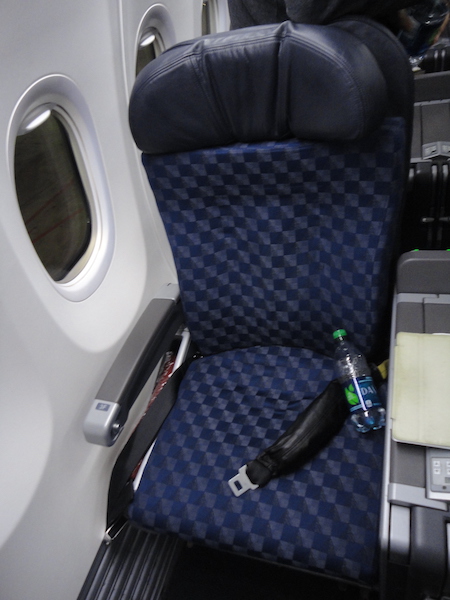 The first class seats are aligned 2-2 and are upholstered in fabric with leather adjustable headrests. The recline is very generous with the seat base moving forward while the back reclines. There is no cut out in the bulkhead for your feet but the legroom is ok for my average sized legs. Each seat has a fold tray table and smaller fold up cocktail table. The seat pocket in the bulkhead has so many magazines and promotional material in it that it is barely usable which is annoying as its where I like to stow my iPad. There is however a small storage section beneath the outer armrest which is useful for the blanket or an iPad but smaller items aren’t the best fit as its too narrow to get your hand in to retrieve them afterwards (American almost got my wallet). The outer armrest also folds up if you feel the need to lean against the wall.

Overall it’s a comfortable seat although as with any North American carrier, it’s rating as a First class seat is more comparable to Australian domestic business class or international premium economy seating.

Aircraft: 737-800. This is the second of this type I’ve flown on with American and both have had the Boeing sky/signature interiors which makes them feel very new (primarily because they are), modern and spacious. The larger overhead bins are definitely used to capacity and the design of the overhead panel, especially the air vent is a nice change from the 737 classic models and the 737 is a huge improvement in comfort over the Super 80’s they replace. The configuration includes 4 rows of first class separated by a thin bulkhead and curtain from economy. 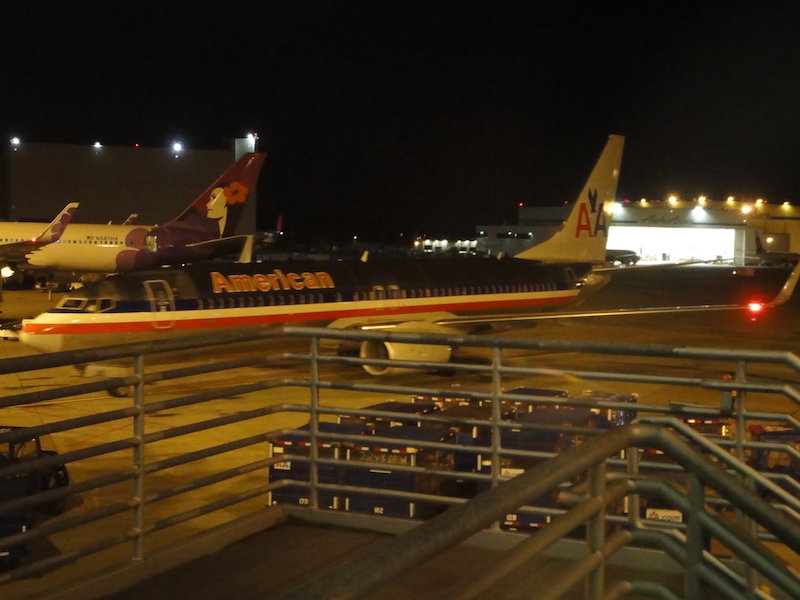 My only gripe is the temperature level – which is set very high especially at the front of the aircraft. I have found this across the entire fleet and I guess it’s just a north American thing where indoors is kept crazy warm!

IFE: There isn’t any seat back IFE available however there are fold down LCD monitors beneath the overhead lockers on each side of the aisle. As this flight is 3.5hrs a movie is shown free of charge (I’m not sure how they would charge if they wanted to?). Today’s film is a biography type thing on Katy Perry. Additionally this aircraft is fitted with WiFi which can be purchased if you want to stay connected with the outside world. Although I didn’t use it on this flight I’ve tried it before and found the speed to be pretty good and similar to mobile broadband on the ground. If you need to charge something you’ll find a power outlet between the seats in first.

Meal: Prior to pushback tray of drinks including water, orange juice, cranapple and mini bottles of vodka were paraded around the first cabin. Spirits seem a lot more popular in the states than beers or wine. Once we we at cruising altitude a snack/supper service was served on tonight’s red eye service which consisted of a drink, hot nuts and a warm white chocolate and raisin cookie. I decided to have a gin and cranberry which was very strong and did me for the whole flight, with the exception of a sprite later in the flight. 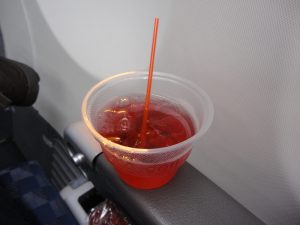 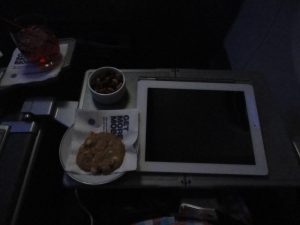 Arrival: Earlier in the flight the captain advised that it would be a little foggy and about 7deg Celsius on arrival. He also went through the calculation between Celsius and Fahrenheit which was kind of cool. Arrival was on time and had a nice view of the expanse of Chicago through the fog. On arrival in the H concourse I checked the boards for my connecting flight which was departing from the K concourse before stopping in at the Admirals Club before my next connecting flight – I’ll give that a review in my next InFlight however I’m not sure it really warrants an entry in the InLounge section. 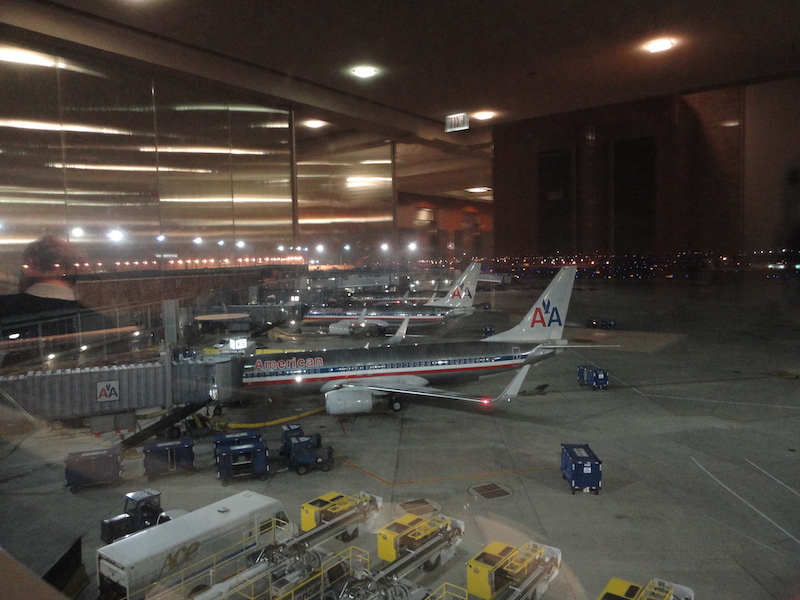 Crew: The red eye flight meant that the crew tried to let as many people nap as possible and thus there was only a limited amount of walking up and down the aisle. Even so the crew were very attentive amd friendly when serving the light snacks and drinks. There was a little bit of chatter in the galley, not that you could make out what was being said and I doubt it could even be heard past the first row. This didn’t really bother me and I don’t blame them as it would be a pretty boring flight for them otherwise. I stopped by on the way back from the bathroom and asked for a sprite and the crew member began pouring it into a plastic cup, before the first attendant said “Oh no he’s my passenger, we will deliver that to you sir”. Seconds later my sprite arrives in a glass 🙂 Nice touch and was sort of funny the deal that was made over being a first pax.

Overall: Comfortable seat, smooth flying, a friendly crew and movie to watch made the 3.5hr flight go by very comfortably. Although this was a red-eye flight it was pretty comfortable and I arrived feeling fresh despite not sleeping. As this was the first of 3 flights today I’ll let you know if I was still feeling refreshed at the end of the day.