Our Journey to Livingstone, Zambia

As social distancing laws and travel bans continue it appears to be unlikely that I’ll be travelling much further than my local supermarket for the foreseeable future. Instead of planning my next adventure I’ve decided to reminisce on past adventures that I never found the time to write about. While pulling together my new website I noticed that the continent of Africa was absent from my musings so decided it was time to reflect on my 2018 adventures in southern Africa.

I visited Victoria Falls in the winter of 2018 as one part of a three stop, two week trip that touched on South Africa, Zambia, Zimbabwe and briefly, Botswana. This was my first (and to date only) exploration of the African continent. Unlike most travels where I’m either solo or travelling with Thom, this trip we travelled with two other friends and this was midway through our travels. We’d spent the week prior at a family run game reserve in South Africa near Kruger National Park and had flown from Nelspruit Airport into Livingstone. Nelspruit was about a 3 hour drive from our game reserve which meant an ungodly departure to make our 11:30am. We weren’t alone with a convoy of three shuttles taking the different groups (all of which could have easily fit in one of the minivans) to the airport around 5am.

Flying from Nelspruit to Livingstone 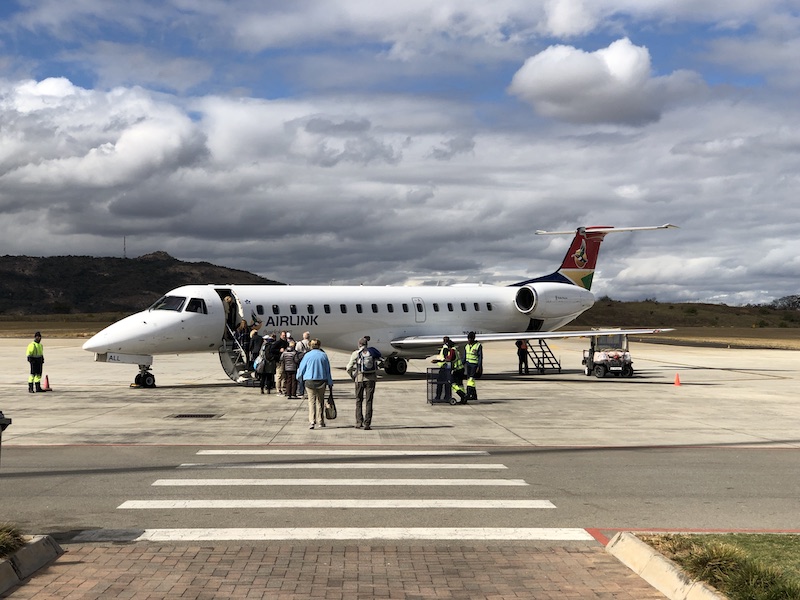 Although small, Nelspruit was a cute little airport with a thatched roof and great open air viewing areas for aviation geeks like me. The airport caters for under 10 scheduled fights a day, which seem to all run on jungle time but include a mix of domestic and international fights. After clearing a very relaxed immigration we waited in a holding room and observed workers attempt to install lights on top of a pole in ways that wouldn’t pass any form of OH&S standards back home but provided entertainment as we waited for our flight to board. Despite so few departures each day our flight and another flight to Vilansulos boarded at the same time through the same door. There was more than one confused passenger wondering which plane to board, but we all seemed to make it onto the right plane by walking across the tarmac and boarding our Embraer 145 for the 1:35hr flight to Livingstone.

Livingstone airport or Harry Mwanga Nkumbula International Airport as it is officially known is home to a new terminal that was built to cater for an expanding tourism industry. It was quite a change from the rural thatched roof of Nelspruit with its steel frame, glass walls and expanses of tiled floors leaving what appears to be heaps of space for future travellers. An unusual feature of many airports on our trip was the firearms collection points scattered throughout the terminal and the number of people collecting what looked like large weapons from within. On arrival we purchased a visa for $50 USD that covers both Zambia and Zimbabwe and a single day trip to Botswana. While you can get a visa just for Zambia, we were spending most of our time in Zimbabwe so the dual visa was handy and saved buying another visa when crossing the border the following day. The visa is called the KASA visa and is well worth the investment.

We’d arrived on the Zambian side of Victoria Falls mostly because of flight connectivity and to avoid back tracking to either Cape Town or Johannesburg. After clearing immigration and customs we found ourselves a taxi driver amongst the hordes of drivers touting for business and negotiated a fare to our hotel in Livingstone. Livingstone, named after the first European, David Livingstone to explore the region. There is a lot of colonial history in these parts and places and landmarks seem to bear the names of colonial explorers from this era. On the 30min drive from the airport Steve (our taxi driver) gives us a brief history of the city, its economy and attractions and seems excited to share his views on the things to see and do in Livingstone. Of course, this history lesson and helpful tips form a great basis for his sales pitch for being our guide for the remainder of our stay in Livingstone and before Steve’s name and mobile number are stored in my phone (as “Steve Zambia Taxi”) and we’ve negotiated a rate for the rest of the days activities.

We took Steve’s advice and relaxed and eat some lunch in the hotel before heading down to Victoria Falls in the late afternoon. Our hotel was comfortable and clean with a nice open plan foyer crossing a landscaped pool and pond area into the wings housing our rooms. Our room contained twin beds (I later learned that Zambia aren’t officially that LGBTI friendly, thus no king bed for us) and each room had a handy can of bug spray which I proceeded to nuke the room with before adventuring out for the afternoon.

The Zambian side of Victoria Falls

Steve was waiting on schedule to drive us to the Zambian side of Victoria Falls. We hadn’t planned visiting this side of the falls but were glad for Steve’s advice on where to go and when he would meet us later to take us back to the hotel. Attempting to avoid eye contact with the many curios sellers that lined the entrance to the national park area, we entered the scenic area and pondered our options. The main attractions in the park are the knife bridge, boiling pot and a walk along the Zambezi river. We decided on the most strenuous activity first, being the hike down to the base of the falls. 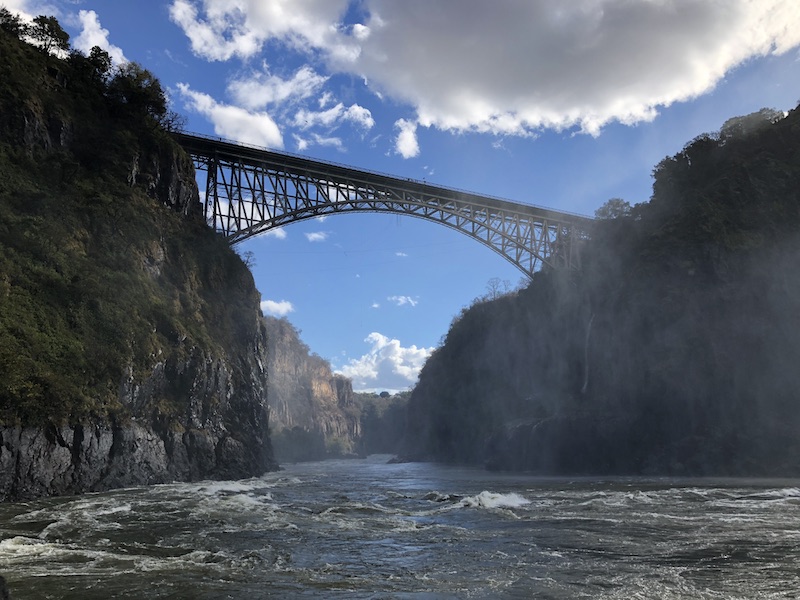 While many guides online describe the boiling pot hike as a rafting experience with a guide, you can walk down the path yourself without a guide, which is what we did. It’s about a 20 minute walk down to the base of the falls which requires some climbing over rocks that cover what once may have been a path. Although it was still humid, it was cooler than the top of the falls as the tree and gorge provide shade from the sun. The climate seemed to change from the dry dusty surface into a wet and lush canyon filled with greenery. As we descended, we were occasionally followed or had to pass troops of monkeys. I’m not all that comfortable around these ancient relatives, but with encouragement from other travellers we managed to navigate our way to the base of the falls.

The naming of the waters at the base of the pot seems quite apt when we arrived. While clearly not boiling in a temperature sense, the bubbling and rapid movement of the water mimics that of a pot of boiling water. Some tours include swimming on the boiling pot hike. Looking into this canyon of twirling, murky, bubbling and fast moving water I quickly form the view that any such a swim would be suicidal. Swimming aside, the view is definitely worth the hike down (and subsequent harder climb back up). The canyon walls are joined by the Zambezi Bridge and we sit on the rocks to catch our breath as adrenalin junkies bungee jump from the bridge and into the canyon below. This is an activity that we won’t be partaking in but enjoy watching them leap off and then be slowly pulled back up to the bridge.

The railway bridge was one of the reasons (logistics aside) that we had landed on the Zambian side of the falls. A luxury steam train takes dinners on a journey across the bridge serving dinner and drinks in the historic restored steam train carriages. Alas it seemed impossible to get tickets for the trip so instead we were exploring the falls from a different perspective. Although initially disappointed, our self-guided exploration of the falls did not disappoint. After catching our breath, we climbed out of the boiling pot and made our way towards the knife edge bridge for a view of the top of the falls.

The knife edge bridge is a narrow steel footbridge that joins to parts of the canyon and allows access to closer views of the falls. It would be easily passable and not very scary if it not for the intense amount of mist and rain that the falls produce. The mist is so thick that you can’t see the base of the falls and the resultant rain that the falls produce mean the bridge is itself a river of water flowing about an inch thick. We decide to leave our shoes in the capable custody of Thom who decides not to risk certain death and the three of us slowly (I may be slower than most) make our way across the bridge. The spray comes from all angles and we are all soon absolutely drenched. On reaching the other side, not even the foliage of the trees provide protection from the drenching mist. The mist, wetness, sound of the falls and the fact that I haven’t slipped and fallen to my death on the slippery rock path leads to a euphoric feeling. I find myself giggling like a child and loving every second of this drenching by Victoria Falls.

Crossing the bridge on the return journey (being slightly downhill) is harder than the outbound trip and an older lady partially catches me as I slip, laughing as I slide on the metal floor. Shoes now back on and squelching with each step, we explore upstream of the falls where signs advise that it is prohibited to swim or fish in the pools and that sudden burst occur requiring litter to be placed in the bin. While originally disappointed that we won’t be doing the luxury train journey we’re now glad that it freed time to explore the Zambian side of the falls.

Zambian spontaneity made the day 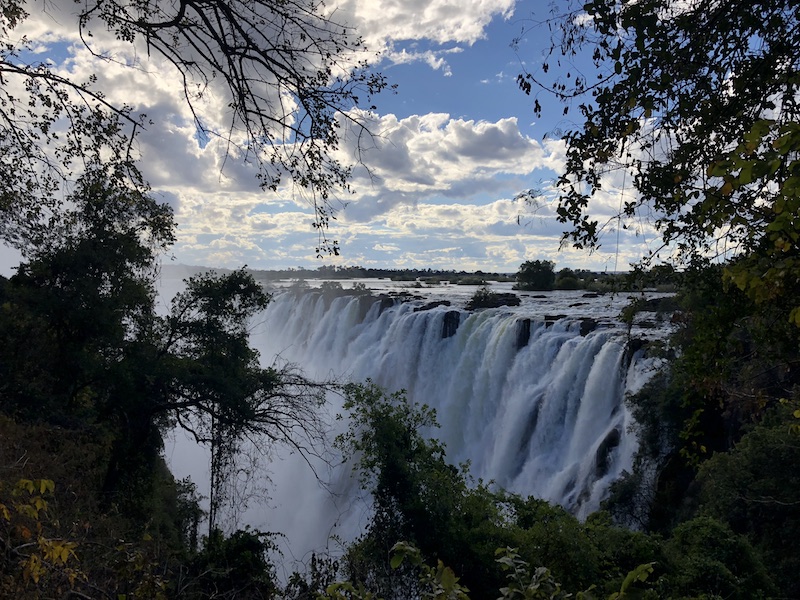 We exit the park just before sunset, explore a few of the curios stands (which to be honest, all sell the same stuff, none of which looks like it was made anywhere other than China) and meet taxi driver Steve for a short drive back to our hotel. Having woken early to make our flight to Zambia, we opt for dinner in the hotel where I’m served one of the largest steaks I’ve ever eaten before retiring for the night as my clothes slowly begin to air dry. The next morning we will cross into Zimbabwe to explore the other side of the falls, but that will have to wait for a follow up post. Despite only spending half a day on the Zambian side of the falls it was one of the most enjoyable days of the trip. With nothing planned before arrival the day was spontaneous and exciting. If I ever got to go back, I would still like to do the luxury train journey but I’m not at all disappointed with how our day turned out.