In part 1 I introduced you to the parliament of Victoria and the parks that surround it. In this, the second and final part of Parks, Politics and Performances I’ll introduce you to some of the performance houses around the eastern edge of the city from the past and present. I left you at the top of Lonsdale Street last time, which is also one of the entry’s to Melbourne’s City Loop underground train lines.

Opened in the early 80’s, the Melbourne Underground Rail Loop is it’s official name however it is generally called “the loop” or “the city loop” and consists of 3 underground stations; Parliament, Melbourne Central and Flagstaff and 2 above ground stations; Flinders St and Southern Cross. Most of Melbourne’s train lines run through the loop and it’s a handy way of getting to where you need to from the suburbs. Above Parliament station you have surprisingly the Parliament buildings that I discussed in Part 1 as well as my favourite performance theatre, the Princess Theatre. 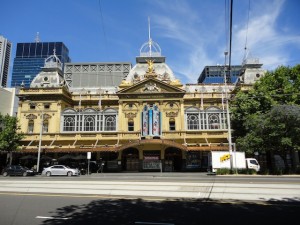 The Victorian façade of the theatre opens to an elegant marble staircase which brings guests into the amazing 1488 seat theatre. If you are in Melbourne and like the theatre then this has to be on your list of places to visit. There is nothing like coming out during intermission, grabbing a glass of wine from the upstairs bar and then walking out onto Spring St on a warm summers night with fellow theatre goers before heading back in for the second act. The Phantom of the Opera has played about every 10 years since 1989, with the last in 2007. Today however you’ll have to contend with Hairspray. 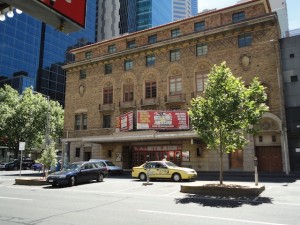 A short walk around the block will reveal two other of Melbourne’s great theatre buildings. Just down Latrobe St you’ll come across the Comedy Theatre, which in contrast to the Princess’s Victorian façade is a smaller square brick and stone clad building with a Spanish style façade. Surprisingly you’ll find comedy shows in here, Avenue Q being my favourite from a few years ago, but a more regular feature is the Melbourne International Comedy Festival which is held across various sites in the city for about 4 weeks in April, including the Comedy Theatre.

Diagonally across Exhibition St is Her Majesty’s Theatre, built around the same era as the Princess Theatre, Her Majesty’s shares some of the same exterior styles of the Princess, although nowhere near as grand. Like most of Melbourne’s theatres this one has undergone many iterations of renovations and improvements, however in 1909 Dame Nellie Melba forced additional renovations after describing the acoustics as “dead”. Today, with acoustics suitably repaired, you can view Mary Poppins however in its infancy Gilbert and Sullivan were the theatres bread winning performances. There is a small bar/cafe where you can grab a drink before the show while waiting for friends or many of Chinatown’s bars and restaurants down little Bourke street. 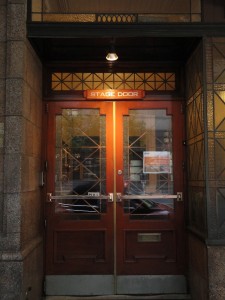 The final theatre I’ll talk about is the regent theatre, which is by far closer to Flinders St than Parliament, but it seemed more appropriate to group the theatres together when I started writing these. The Regent is on Collins St, next to the Westin Hotel. Originally built as a movie theatre the theatre has since been gutted by fire, closed and abandoned for 26 years, before being saved from destruction and converted into a performing arts venue, reopening in 1996. Wicked, Cats and West Side Story have all  recently featured in the theatre. I find the grand entry and surprisingly the stone stairways that spiral down to the bathrooms visit worthy features of this building as well as how the theatre opens up from what appears to be  a small entrance into a large theatre and stage.

Back onto the original city circle route from Lonsdale Street its only a few minutes walk to Carlton Gardens, home to the Melbourne Exhibition Building and Melbourne Museum. As I said in Part 1, Melbourne has got some great inner city garden spaces that you can exercise, relax or just wander past and look at when you want to look at something green.

Carlton Gardens is no exception to that statement, however unlike the locally heritage listed toilet block in Treasury Gardens, the entire Carlton Gardens and the Royal Melbourne Exhibition Buildings that it contains are a UNESCO World Heritage Site. This heritage listing, mainly due to the exhibition buildings which I’ll discuss later, means there is more publicity and promotion given to these gardens than others. It’s also home to an annual flower and garden show that is well worth the admission if you are in town when its on. Otherwise, you can stop in at the Melbourne Museum, that’s conveniently located in the middle of the gardens and pick up a Gardens Walk booklet. 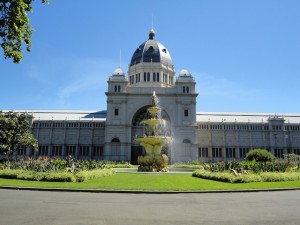 The walking guide book contains 35 points of interest within and around the park and seems worth doing (although a many of these are “interpretive signs” telling you of what used to be here). I unfortunately found the booklet after I’d spent a fair bit of time wandering around, so haven’t done it myself, but most of the things listed in the book were places that I was drawn to anyway, which makes me think the guided walk would be pretty good. One such place is Colonial Square where large chunks of the carved stonework from the 1896 Colonial Mutual building have been dumped (ok placed would be a better word, but I think they are going for an artistic look, which to me looks like they were too heavy to move once they offloaded them from the truck). Most buildings of this era haven’t survived Melbourne’s development and thus its good to keep some parts of what they city looked like (albeit it small chunks). 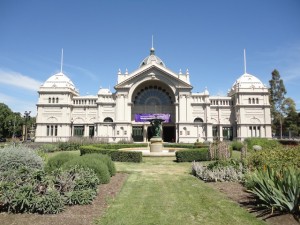 Across Nicolson Street from the park, just near Colonial Square is an old red brick building on the corner of Gertrude St; the Cable Tram Engine House. Although not used as one anymore, this building was built and was used to pull the cable car trams to the exhibition and all across Melbourne via underground cables. The attention to detail on the outside of this building is amazing, considering it was an industrial building! The comparison between this and a modern railway stable (e.g. a big tin shed) is amazing.

Another attraction within the park is the Hochgurtel Fountain which lies on the southern side of the Exhibition Buildings and is meant to represent the key themes from the 1880 International Exhibition for which the Gardens and Exhibition buildings were built. Having been to this part of the park on many running club sessions, for me this fountain represents the provision of a nice cool breeze of mist after running up the hill to it during hot training sessions. Although you may be tempted to take a photo facing the building with the fountain in the foreground (which by all means you can) make sure you stand on the steps of the building and look back on the city too. Sometimes when you get into the parks you can forget that you are in the middle of the city, and this is a good place to look at the city and realise how close you are to the centre of town. 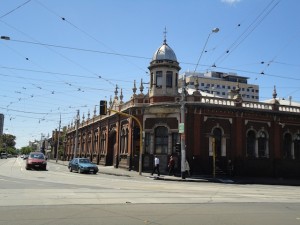 The key attraction (well at least it was circa 1880), and reason for the creation of the park is the Royal Exhibition Buildings that are in the centre of the park. This building is the Great Hall and is the only remaining section of the original Exhibition Buildings (which were 10 times the size of the great hall!). Originally the buildings consumed all of Carlton Gardens to the north of the building, which is now occupied by the Melbourne Museum and more gardens. It’s still used as an exhibition building, which is one of the reasons its on the World Heritage list (something to do with one of the longest continuously running exhibition building) so if there is an exhibition on, go in and check out the inside of the building. Otherwise for about $5 you can go on a guided tour of the building which is provided by the Melbourne Museum.

The Royal Exhibition Buildings were also home to the birth of federation of Australia as the first Parliament was opened here. On May 9, 1901 the exhibition buildings were full of people as the first parliament opened. There is a great painting of this event on the Mezzanine level of the building, which you see when you are on the tour. Back in that time you were able to take an elevator to the top of the dome for a view over the then growing city of Melbourne. Alas today they no longer off this tour however I’d imagine the view would be an amazing transformation from 1901. 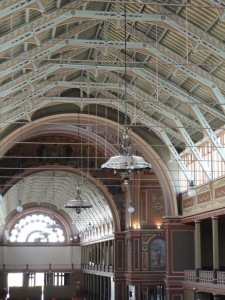 Again if you want to see inside the buildings, I’d strongly recommend the Melbourne Museum’s tour of the them (and for about $5, it wont break the band). I think the Museum itself can probably justify an article on their own, so I wont go into those too much in this article other than to say that its new, big and hosts some great touring exhibitions. The most recent exhibition was Titanic, which was amazing and rather moving. The next big exhibition scheduled is Tutankhamun which is scheduled to open in April 2011 and is already on sale if you’re interested.

So why did I name this two part series Parks, Politics and Performances you might ask? Well other than that the parks and parliament are next to each other and the theatres aren’t to far away I find they are linked in a simple way. Well our first parliament was held within a park’s exhibition building (thus linking the parliament and parks for ever more), and while the performance venues put on staged performances every night, our parliaments also put on a performance most sitting days too, although they call it Question Time. Therein I decided to link Parks, Politics and Performances into this two part blog, which I hope you enjoyed. 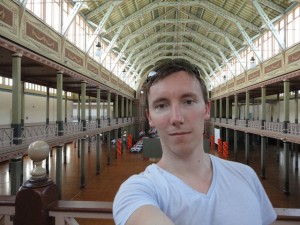