At the end of the last episode I left you with a hot chocolate (or coffee) and about to board the city Circle Tram which is where I’ll start today’s post, heading east along Flinders Street towards the top end of town to look at some of the Parks, Politics and Performances that you’ll find in Melbourne. Fortunately Melbourne put on some great weather so I decided to get out and about and become a tourist in my home city for another day.

Jumping aboard a city circle tram which run from 10am – 6pm each day, is pretty easy, but depending on the time of day and what’s on around the city at the time you’ll find that it can get quite overcrowded. So although this series follows the tram route, you can pretty much do it my foot as well. In fact if you want to follow today’s trip, you’ll need to do some walking as I’ve looked at a few places that surround the route, that you’ll need to walk to get to. From the tram, jump off at the first stop heading anticlockwise on Spring Street. 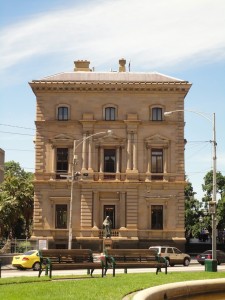 To your left you have what’s known as the Paris end of Collins Street where you will find shops selling all the brand labels that you cant afford. If you want to leave my post here and spend up, then turn left. If not continue with me and you’ll have plenty of cash left over to donate to this site by the end. Directly across Spring Street is the Old Treasury Building. Designed by a 19 year old architect the building was constructed during the Victorian gold rush between 1858-1862 to store Victoria’s gold and was technically home to Australia’s first unofficial parliament. During a secret premiers meeting in 1899 it was agreed that Melbourne would host the first national parliament until the location of the national capital was announced.

The treasury functions have long been replaced by 2 Treasury Place, however today you can view a permanent exhibition of Victoria’s archives or the current exhibition that looks at the construction and collapse of the West Gate Bridge. The west gate bridge exhibition is free and is open on Sundays and Wednesdays, unfortunately I arrived on a Saturday so will have to stop back to check that exhibition out. Alternatively if you bring your loved one with you, you can get married in the registry office like the couple that were getting their photos taken on the steps as I wandered past.

After you have your wedding photos on the stairs, wander down into the Treasury Gardens which surprisingly, are next door to the Old Treasury Building. This site was originally unsellable due to its swampy location, however today you’ll be struggling to find any similarities as the variety of trees provide shade across the lawns where people do yoga, boot camp training or just relax and read a book beside one of the many paths that weave around the park. The accessibility to city parks in Melbourne really assists with its liveability. Having lived in an apartment in the city before, it was great to be able to walk 5mins and be in one of the many parks that surround the city to relax and unwind. Treasury Gardens is one of the smaller parks, even though it is almost 15 acres, it feels bigger by as the landscaping makes you feel removed from the momentum of city life.

Just before leaving the park to the east you’ll notice an art deco toilet block. I never thought I’d be writing about a toilet block in my blog, but during my research I found that this building, built in 1939 is actually on the Heritage register due to it’s art deco design that “exhibits outstanding craftsmanship”. I’m not advocating a trip to Melbourne to visit a toilet, but if you feel the urge before you cross the road into Fitzroy Gardens, you’ll know you’ll be involved in history in a somewhat unusual way. 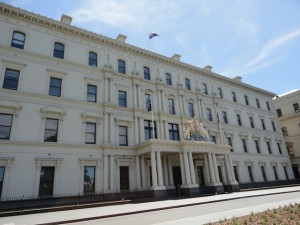 Fitzroy Gardens are one of my favourite parks in Melbourne which I used to run though almost every day when I lived in the city. The gardens are lower than most of the surrounding roads, which, in combination with the avenues of thick tall trees, buffer out

almost all traffic and other city noises when you are in the centre of the park. Whether you’re going for a run, a casual stroll like I am today

or having lunch in the central pavilion it’s a great place to escape the city for a while.

Ironically named after a New South Wales governor, the park spans 64 acres and contains several sites to explore if you don’t feel the urge to join a fitness group or go for a run yourself. On the western side of the park there is the conservatory, built in 1930 to showcase indoor plants. This now contains a small creek, bridge and a great display of indoor plants. I’m not sure which end you are supposed to enter from, but the path is narrow and either way I went was crowded, but worth a quick look. Just down the path from the conservatory is Captain Cooks Cottage, one of the more popular tourist attractions within the park. 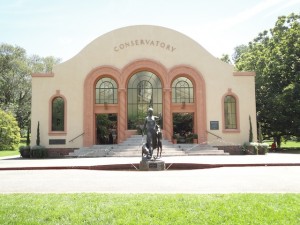 Shipped from North Yorkshire, England in 1934 the cottage was reconstructed brick by brick in the gardens as a gift to the people of Melbourne celebrating the centenary of European settlement of Melbourne. Although it was a gift to the people of Melbourne in 1934, if you want to enter the house now it will set you back about $4.50. I’ve been through the house before, in which you’ll notice the very small living conditions of the time. Thus the visit to the house doesn’t take that long, and yo

u don’t see that much. You do get a brochure that outlines the history, so if you like seeing the history of a city, its worth a go. Funnily, although named Captain Cooks Cottage, the building was originally built by Captain James Cook’s parents in 1755 and historians argue as to whether or not Captain Cook ever actually resided in this house, thus it may be a bit like visiting the parents of a famous persons house, which doesn’t have the same appeal as their own. I’ll leave it up to you to decide if you think he lived there or not.

There are more historical items within the park that also respect the traditional inhabitants and owners of the land. The scared tree, not to be confused with the fairy tree, represents the Wurundjeri people who removed the bark from the trees to built canoes, containers and shields and is an aboriginal cultural site. As with many cities, the historical story of the city is generally told using the arrival of European settlement as the start, when the history of the aboriginal people extends thousands of years before. Although smaller in comparison to cooks cottage it is a reminder of the true age of human activity in the Melbourne area. 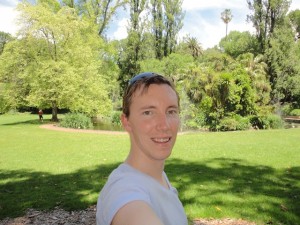 Speaking of small, the miniature Tudor village and fairy tree entertain a kids birthday party as I meander throughout the shady central path. Although nothing compared to Cockington Green in Canberra, the small miniature village is free to see and seemed to entertain the younger kids who, unlike the adults surrounding them obviously still had a creative imagination where fairies fly out of the tree and visit the miniature houses. Although the park is tranquil, the noise of the children’s party reminds be that it’s time to leave the shade of the park and walk up out of the sunken Fitzroy Gardens towards what I regard as Melbourne’s most spectacular church. 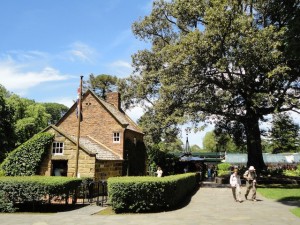 St Patrick’s Cathedral was named after the patron saint of Ireland due to the predominately Irish catholic community during the time of its construction in 1858 – 1897 and was one of only 2 churches of its size brought to almost completion in the 19th Century. Although this blog isn’t a tour of churches (I’m not in Adelaide yet) this size and attention to detail of this cathedral makes it worth a visit, regardless of your religious views. Standing in the centre of the church, the spire above is over 100m high, the church is just almost as long and half as wide. The architecture is of the gothic revival era with massive walls of bluestone capped with much lighter spirals.

Unlike my visit to St Pauls Cathedral, St Patricks seemed to attract many visitors who appear to make mini pilgrimages to visit the church. The silence within the church is almost deafening as a smoky haze of prayer candles and the smell of incense seems to drown out any quiet prayer or soft talking. Declared a minor basilica by Pope Paul VI in 1974 and resorted in 1997 the 5 acre site is must for anyone who enjoys the dedication to detail in these old church buildings provide. 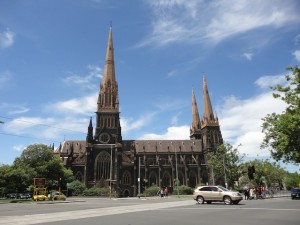 Leaving the church and walking along Albert street towards the city you get a glimpse of the past and the present. Behind you St Patrick’s cathedral with its detailed spires, ornate cornicing and stained glass windows which although beautiful to look at, realistically provide no other useful purpose. Ahead of you on the right is the Orica House, Melbourne’s first high rise office building constructed in 1958. In contrast this building which is tall, has flat glazed walls and lacks any of the visible craftsmanship of the previous era of buildings and seems to be constructed only with purpose and functionality in mind. Ironically this building hit the media during its early days as panes of glazing frequently fell to the street below so perhaps the attention to purpose wasn’t completely followed.

Obviously building design changes, however when looking at some of the high rises that are constructed which often lack any form of creativity or design, it seems a shame that we don’t seem to take pride in the appearance of our buildings in the same way as they were constructed in the early days of Melbourne. Saying that, there are some exceptions to this statement that I’ll hope to show you in future blogs. 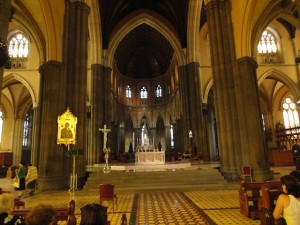 Albert St ends and becomes Lonsdale St as I arrive at Nicolson street where the City Circle Tram again crosses my path after leaving it a few hours ago to take in a selection of Melbourne’s Parks and Historic buildings. As this post is getting quite lengthy, I’ll break today’s trip up into two episodes so you can grab a coffee or do some holiday planning of your own between reads. Of course I could write less, but I like to capture the history of the places I visit, as well as what I think of them in these blogs, so you’ll just have to make sure your reading glasses are on when you come back for episode 3 which will continue to look at Melbourne’s Parks, Politics and Performances.