Location: I must admit that finding the Qantas lounges in Bangkok’s mega airport was a little bit challenging and I wished I had paid more attention to the lovely staff at first class check in. Once you clear immigration turn right and keep walking until the first four way intersection with E gates to your left, F gates straight ahead and G to the right. Take the escalators on the left down to level 3 and then head straight down the G concourse past the Cathay lounge and the Qantas & British Airways lounge is the next lounge on the left. On the airport map its pretty much on the G concourse between gates G1 and F2 on the neighboring concourse.

Entry: Like all of the Qantas/British Airways (and most Oneworld) First lounges, entry is open to all First class passengers traveling on a Oneworld ticket that day as well as Oneworld Emerald frequent flyers (Qantas Platinum). At airports like Bangkok and Hong Kong you can easily ‘lounge hop’ between Oneworld lounges (if you are Oneworld Emerald anyway – unfortunately if you are ‘just’ flying First class then you can only use the airline you’re flying on’s lounge) should you have the desire or dislike your current lounge. During my visit I did just this (more reviews to follow) however my advice would be that if you have access to this lounge, stick with it as it is the most comfortable and has the best food and drink offerings of all the Oneworld lounges in Bangkok. 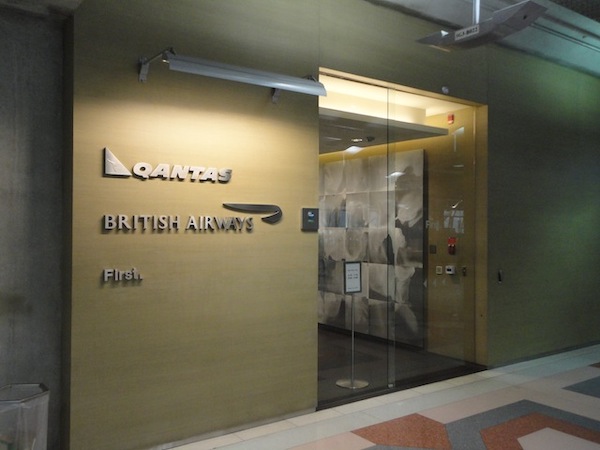 According to the Qantas webpage the lounge opens from 13:00 until the last departure however the sign at the entry shows hours from 14:30 – 17:30 then 20:00 – 24:00 which accommodates the Qantas and British Airways flights. If you are a QF Platinum flying Jetstar to Singapore, given these opening hours the lounge would only serve the last flight of the day as well as the direct Jetstar flight to Melbourne.

Space & Comfort: The lounge is significantly smaller than the First lounge in Sydney and most domestic Business Lounges in Australia for that matter. Given that Bangkok is a stopover point for London, with most passengers continuing on, the lounge serves its purpose well as few passengers have enough time to use the lounge for extended periods during the relatively short connections between the London and Sydney flights. Having said that, the lounge does fill up pretty quickly once the British Airways and Qantas 747’s bound for Sydney arrive, but it doesn’t feel as crowded as the Business Lounge. The lounge itself is divided into 3 seating zones each of about 20 seats, the business center and the bar / food area with windows facing onto either the apron or gate area on 2 sides.

If you are looking for somewhere quiet to sit I would suggest the middle zone as the area closest to the entry is rather loud as each time someone walks past the entry, the automatic doors open and let in the constant airport announcements. The area closest to the bar has a TV and people congregating looking over the food and drinks so should also be avoided if you want quiet time, thus leaving the middle section your only option. The seating in all sections is comfortable and generally set up with a pair of chairs around a table, very similar to the armchairs at most Qantas Clubs. 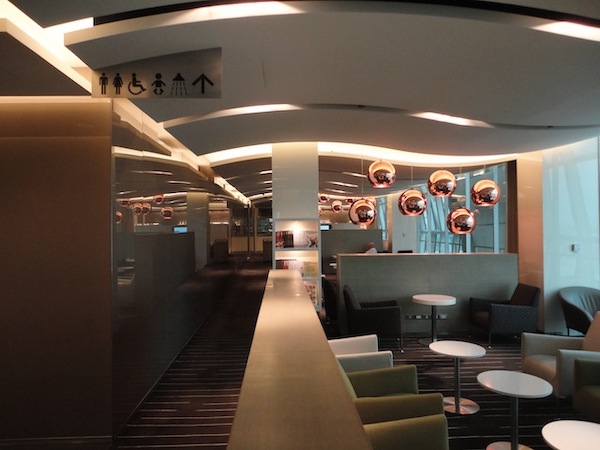 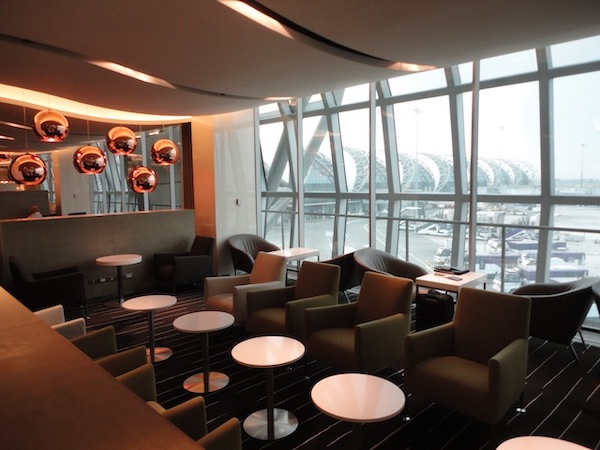 Food & Beverages: The food and beverages are all self service here unlike the table service at the signature first lounges in Sydney and Melbourne although the selections are fresh and there is enough variety to keep you full (or soak up the impressive spirit and wine collections). Moët champagne is always a favourite of mine as well as some premium beers and wines that are all freely available, although pouring Moët from through a non spill cap feels rather strange. The food offering today included a selection of antipasto, various bite size snacks, a hot selection of beef skewers, chicken consume soup, fried chicken and ginger rice as well as some fried tofu and prawn. For an Australian touch in the sweets section there were lamingtons available for those getting homesick before the final flight home. 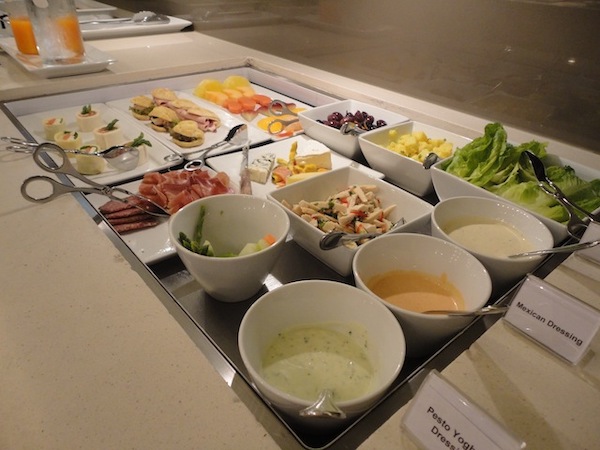 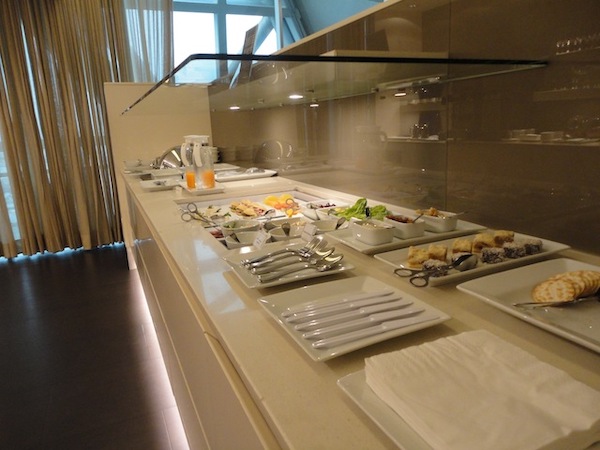 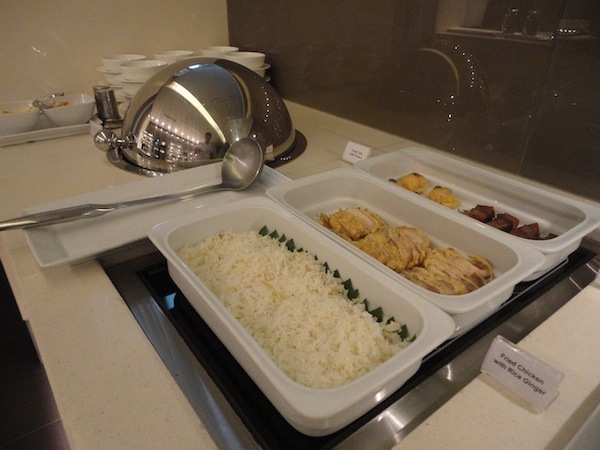 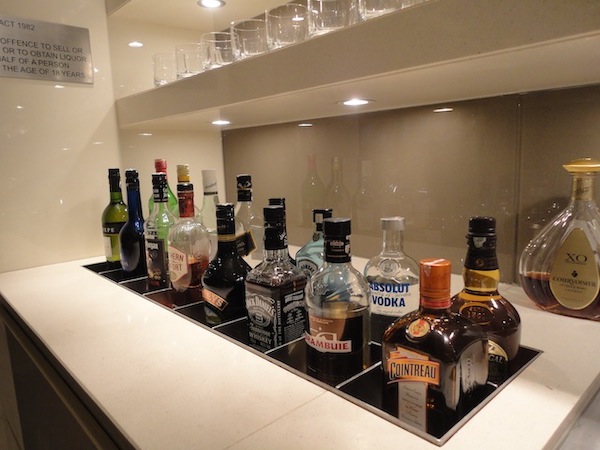 Staff Service: There isn’t much interaction with the staff however in typical Asian fashion the place is kept spotless without really evening being able to see them clean. The food bar is kept topped up with fresh food and spills are cleaned up quickly (not that I made any spills of course). The entry staff were pleasant and even as it got busy they remembered people who had already entered but left to do some duty free shopping meaning there wasn’t a constant checking of your boarding passes each time you go through the door (although for most guests this probably wouldn’t be an issue anyway). The entry staff have all the gate details for the day’s flights displayed as you arrive which can assist passengers in transit avoid searching the congested airport monitors to find their next gate.

Airport Views: Today we had great views of the arriving runway with plenty of action to keep the plane spotter in anyone interested; additionally you get views of ramp activity from both the F and G concourse. Unfortunately every external window in the terminal is covered with small dots making photography a nightmare. Ironically there is a large section of window looking onto the general airport concourse, which reminds me how important lounge access is for international travel as I watched tired backpackers trying to get comfortable on hard concourse chairs while running off to buy bottled water and snacks to fill in the time. Overall the views are great if not a little elitist as you literally look down on the economy class passengers below. 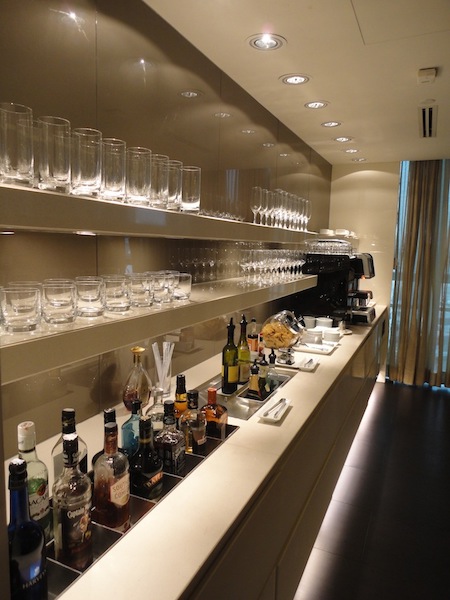 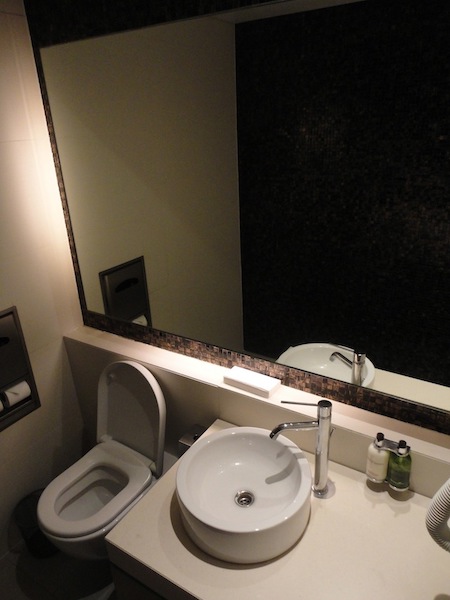 Amenities: The lounge has a toilet / shower complex complete with about 6 showers and several unisex toilets. There is bathroom attendant who cleans the showers and even seems to clean each private toilet suite between use and each cubicle is compete with Molton Brown hand wash – an essential ingredient to any lounge which is surprisingly missing from the first lounge in Sydney. The ratio of showers to guests is impressive and unlike the Cathay Pacific Lounges, the toilets are within the lounge complex so you don’t need to wander around the concourse looking for the closest bathroom.

Business Facilities: There is a small and relatively unused business centre with several computers and a printer available. The only occupant during my visit was a kid passing the time playing online games which is understandable as most people probably don’t want to get into work emails during the short stopover from Europe. There are two WiFi networks available in the lounge with the password available from the front desk. The speed of both networks was impressive and quickly got my facebook’ing and tweeting out of the way.

Overall this lounge is an impressive asset to the Qantas and British Airways alliance between Australia and London and also very comfortable for those passengers starting their journey at Bangkok. Of all the lounges I visited during this stay this lounge is the pick of the punch. 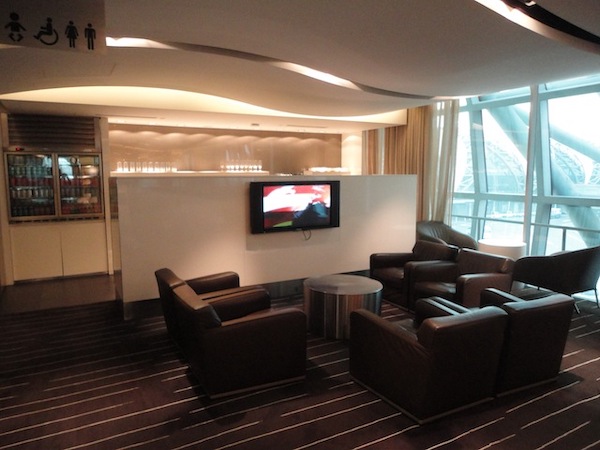 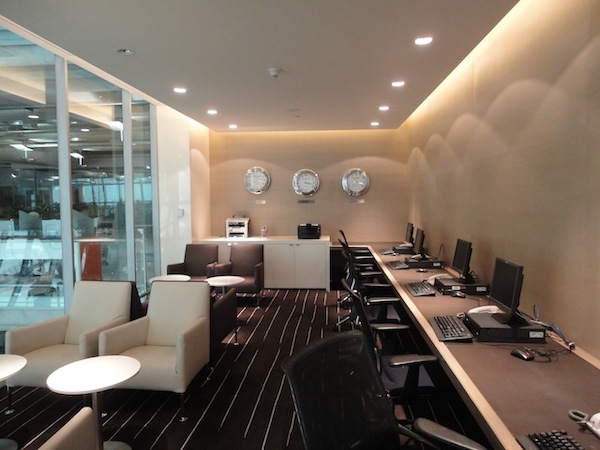