A few weeks ago I was lucky enough to head over to Malaysia for the weekend to visit Cam. Although it’s been a while since I’ve put up a non flight related entry onto the site, I thought given that this site is supposed to be all about travel blogging, I better write a travel blog (also its something different for those who may not be as into flight reviews as I am). This will be the first in a mini series of articles on my few days in Kuala Lumpur, with this starter article focusing on the different senses (sight, sound, touch, taste and smell) that I experienced on my first day in Malaysia. 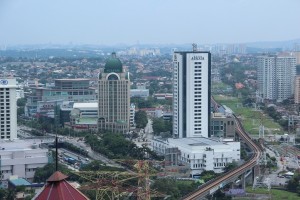 Arriving into KLLCT at about midnight on Thursday night (or is it Friday morning – the whole is midnight night or morning has always confused me) after a rather long series of flights (see the reviews under InFlight) my first day in Malaysia was a little sluggish to say the least. Cam was at work and after a very disturbed sleep (going from 4 degrees in Canberra to about 36degrees in KL messes with my ability to sleep well). The first sense that you feel when you arrive in Malaysia (or anywhere tropical) is the sensation of the humidity on your face, skin and just all over. Stepping off the plane it’s the first thing that you’ll notice (why am I suddenly damp all over?) and again each time I stepped out

of the apartment. Once adapted (or semi adapted),  I decided to check out the Mall area that is Cam’s building before lunch. Cam’s apartment and work is out of the central KL area in Petaling Jaya (about 10 stops on the LRT from the city centre). From what I can see from the 27th floor (through the haze/smog) the Amcorp Mall is pretty much the main area for PJ, which is handy cause that’s where Cam’s work and apartment are based. The city does seem to go on forever with mixes of varies sized buildings amongst the greenery.

Amcorp mall probably equates to an old style shopping mall in Australia (something like the old Lansel Plaza in Bendigo or Cooloman Court in Canberra – all circa 1990). Cam was right when he said it looks better at night as the comparison from night to day meant it now looked a little drab and aged.  There aren’t many brand name stores (well maybe Malaysian brands, but few that I recognised) and despite the constant cleaners with their brooms, its a little tired. It is air conditioned pretty well so as I began to acclimatize to the heat (or thaw out after a very cold week in Canberra) I wandered around a few junk type shops across the 4 levels or so (I know that sounds bad, but it was pretty much what they were selling), a Camera shop or two and then went back to the foyer to meet Cam for lunch. 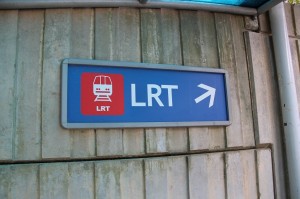 It turns out that Uncle Chilli’s restaurant in the basement is pretty much what Cam has been living off for the last month or so. Cam ordered me the sweet and sour chicken meal and a lemon iced tea (I thought it was peach, but Cam tells me it was lemon, no wonder it tasted different) which was pretty good meal for about 10 ringgit (so much for taking the travel doctor’s advice and avoiding the ice – but had no troubles so meh). I’m not sure what they put in the sweet and sour, but I soon became addicted to it and

we ended up having lunch (sometimes at odd times) there a few times over the weekend; this was my first taste of Malaysia. In fact sitting in the library back in Canberra writing this article, I am suddenly getting a craving for some uncle chilis! Anyway with a belly full of goodness, after lunch was pretty much nap time for me so I would have some energy to head out for dinner tonight.

After Cam finished at the office (and I woke up from my series of naps), we met up with Cam’s workmates downstairs before the short dash across the carpark with its interesting aroma’s to the LRT station to catch the train into the city for dinner and drinks. The LRT is a pretty handy (and very cheap) way to get around – I think it was about 2 ringgit. We left the train at KL Sentral (yes, spelt with an S!) and took the monorail the rest of the way to Times Square. As this was my first real Asian trip (only other experience was an overnight in Tokyo) I hadn’t felt like I had really experienced the stereotypical “Asia” until we got off the monorail at Bukit Bintang, the heart of Kuala Lumpur’s entertainment district. 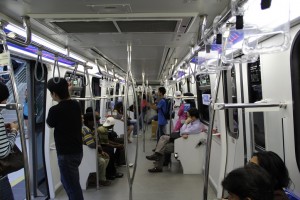 Bukit Bitang (or Bitang Walk) was bright (lots of bright neon lights), crowded, busy and noisy – much more like the stereotypical Asian city image that I had in my mind, or as the Malaysian tourism billboards say – “Malaysia – Simply Asia”. This was the sights and sounds I was expecting to see and hear. In the heart of Bitang Walk, the Times Square Building is actually said to be the largest building built in a single phase (whatever that means) in Malaysia attracting 2.5million visitors a month to its 1000 retail outlets and a theme park. No wonder its busy around here. Anyway we didn’t actually head into the Time Square building, but instead wandered around the streets looking for dinner.

One thing the guys said / warned us about is the “interesting” smells that seem to come out of nowhere as you walk around the streets. In Bukit Bitang we passed a stall in an alley where people were preparing and selling durian (a fruit). Wikipedia describes the odour of durians as “distinctive”, however I think its better to imagine the smell something like collecting the contents of a drop pit, heating it and then being stuck in a small room with the contents at 100% humidity and 35 degrees. Apparently if you can get past the dry reach inducing smell, its actually quite a tasty fruit – Cam said he tried it fried, but on day 1 in Malaysia I must admit I wasn’t as brave, although I know now that holding your breath doesn’t stop the smell getting right into your senses. 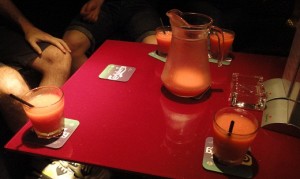 The  buildings around the area are definately varied with old buildings that look like they are about to fall apart squeezed between newer developments and every inch of street frontage used for something (be it a shop, entrance, balcony or sign). We walked past the Taj Mahal hotel (more like a backpackers than the real Taj) before ending up on the balcony at Twenty-One on Jalan Changkat for dinner. Twenty-One is a funky modern looking bar/resturant and our spot in the corner of the balcony overlooks  the street below (and powerlines almost close enough to reach out and grab). The food quality definately does not match its pricing (and I mean that in a good way). Basically if you compared the menu prices in Australia, the numbers are the same, however the currency difference makes it under a third of the price. We all (except Cam) ordered the Wagu Beef Burgers which were awesome and a few rounds of drinks. We just made the end of happy hour where they have one for one drinks, where you pay for one drink and get another drink free. Although this sounds very similar to two-for-one drinks, its not! The locals get very confused if you go and ask for 2-for-1 (but its fun trying to explain it). 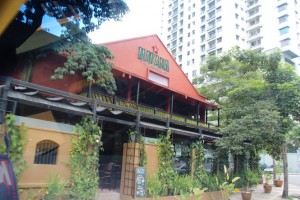 The final stop for the night was across the road at Havana where we were allured by the 60 ringitt jugs of margaritas, 100 ringgit jugs of long island ice teas and the less cheaply priced yet equally yum Tiger Beer. The DJ provided cards to request songs, which we all completed then put 1 ringgit (about 30cents) each on the table to see who’s song came up first. Both rounds Simon and Steph won (rigged contest I know). After a few drinks and watching this guy with some hilariously awesome solo dance moves strut his stuff on the dance floor we decided to call it a night and grab a taxi back to PJ. It seems that although the signs on all taxi’s say the fares must be on the meter, it seems very few drivers actually follow this.

Getting into the cab begins with the negotiations as to “on the meter” or “set fare”… We wanted the former, the driver the latter, by the time we actually negotiated the fare (we got it down by about 5 ringgit in the end) we had actually already gone about 3 blocks anyway. The colour of the taxi actually dictates the price, with Black being the most expensive, then Blue then everything else. The driver would probably have been better off “on the meter” as we were soon stuck in traffic caused by a police roadblock ahead. Our driver explained how much cars / motorbikes had to pay the police to avoid getting fined, his experiences seem to suggest that money definitely talks here. After a somewhat humorous ride home (part of the price negotiation required the driver to play music – of which he wouldn’t tell us the name of until we got home – turned out to be his religious music) it was time to call it an end to day one in KL where I had definitely opened up all my senses to some great new stimulus.