Seat:1A. Although there is some allure to be sitting in seat 1A on any aircraft (as generally the closer you are to the front, the better the seat and service class) when it comes to low cost carriers like Air Asia and Jetstar where its all economy there is no business or first class seats anyway. So while 1A looks slick and sexy on your boarding pass, its just another economy seat, albeit with slightly more legroom. As I’d flown in seat 1A on AirAsia only a few days ago, if nothing but for the sake of a better review, I should have picked a different seat for comparison. Although this particular seat felt a little newer than the AirAsia 1A, the legroom etc it provided felt about the same.

Aircraft: Airbus A320 (Rego Unsure). There are 58 A320-200’s in the Jetstar fleet, each seating 180 in an all economy, 3-3 layout. This aircraft is one of the 12 sub fleet of Jetstar Asia /Valuair and I must say it felt pretty new (not sure if that’s the case or not, but it just felt clean and sharp). Unlike my previous flight, there weren’t as many creaks from the from doors during the climb, although you really do hear the nose wheel lock into place as you come in for landing on the A320’s (maybe you do on other aircraft too, I’m normally not close enough to that part of the plane to tell. 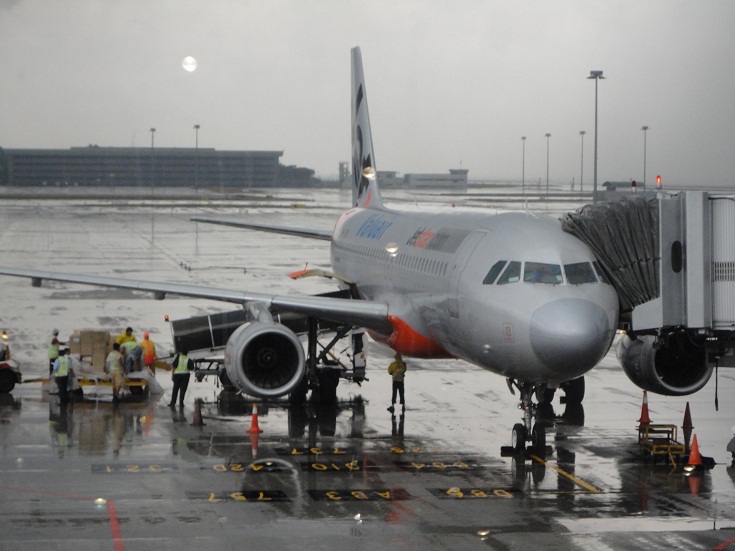 Terminal: Kuala Lumpur International Airport is a pleasant surprise after landing into the low cost terminal. I got to it via a very comfortable 28 minute train ride from Sentral. Although compared to the local trains, its expensive, in real terms is quite an affordable and fast way to get to the airport (and realistically all airport train lines charge a premium for the convenience). Anyway I’d recommend it as a fast and comfortable ride to the terminal, which itself is really open and spacious with a sail like roof. With only carry on, check in was a breeze, no queues to speak of. Immigration clearance felt like it took a while but was really  within 20mins of joining the queue. I think there was something wrong with my passport as I didn’t get fingerprinted on the way out like everyone else. After clearing Immigration and Customs/Security (yes there was Customs x ray outwards) I hopped on the airport train to my terminal (a short yet pretty cool ride across the tarmac to the satellite terminal). I must admit that I did find the signage a little hard to follow and ended up at the wrong end of the pier, but I always do a walk around the terminal anyway so didn’t find it too much of a hassle when I got to the gate.

The last 2 flights are the first in a while where I haven’t had lounge access before a flight, so I was glad I didn’t have to wait too long for security to open my gate for pre-boarding screening (even though I love airports and planes, I think I’ve become a terminal snob and don’t like to just hang out at the gate for hours like I used to). If you do have time (and don’t want to kill it in a lounge sipping champagne) then you should check out the rain forest they have in the middle of the terminal (yes – a rainforest in the airport). Looking in from outside it looked pretty funky (and different too) so yeah, give it a shot.

Departure: As you can probably see in the photos, the weather wasn’t too great when our departure time rolled up and thus there was a very slight delay to our 0840 departure time. Despite storms moving across the airport, the take off and climb to cruise was remarkably smooth with only a few very minor bumps. Although the scheduled flight time was 1:05mins, the flight time was more around the 40min mark (it’s only about 300km) which meant despite the delay, I arrived on time into Singapore.

IFE: As with any low cost carrier, inflight entertainment is definitely a BYO affair. I’m not sure if you can hire portable video players on Jetstar Asia, but for such a short flight it really isn’t worth your time or effort even if you can. I didn’t even bother getting my ipod out from the overhead locker about (there just isn’t enough time to kill).

Meal: Unlike my surprise meal on AirAsia, I didn’t order or purchase any food on this Jetstar flight – primarily due to how short it was (and I had the slightest bit of a hangover, so wasn’t that hungry anyway). The trolley did do a quick run up and down the aisle however by the speed of its return I don’t think any sales were made today.

Crew: The crew were extremely friendly and welcomed everyone on board. One advantage (actually not sure if advantage is the right word, but anyway) of seat 1A that I didn’t mention before is that you see the crew greet everyone as they board – and chat and joke with the flight deck during gaps in boarding. Its hard to really judge the crew, as for such a short flight all they had to do was greet us, conduct the safety demo, try and sell some food and they say goodbye. From what I experienced and saw, the meet and greet was done well and thus, as that’s pretty much all the service offered, the crew scored well. 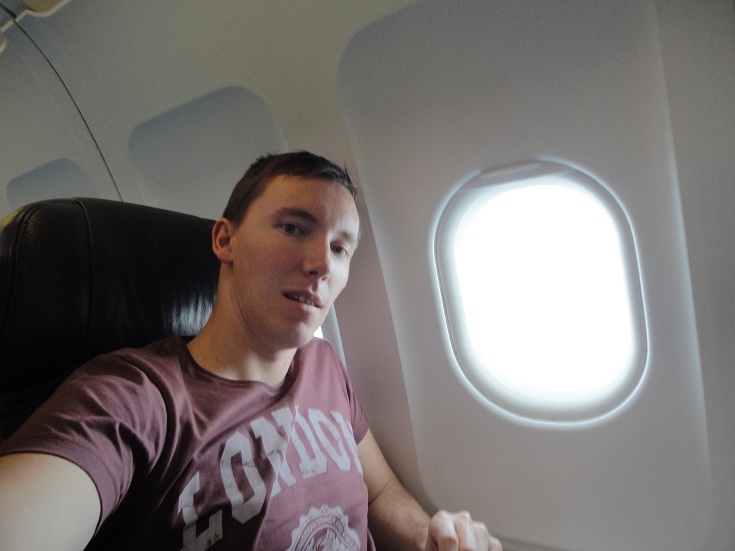 Arrival: I seated myself on the wrong side of the aircraft for my arrival into Singapore as although we taxied the full loop of the airport, I didn’t get any views of the terminal other than during our short landing run as we taxied around to Terminal 1 (almost the same gate where I left a few days earlier on AirAsia). I did spend quite a few hours exploring the terminal during my long stopover, but that’s for a separate review of Changi Airport. As I was transitting, and only had carry on I acutally went and had breakfast in the Qantas Business Lounge before heading off to explore the terminal and a little of Singapore.

Overall: I’ll try and keep it short, as I think I’ve spent more time writing the review than the flight itself. For a short haul flight (under 45mins) this is really all you need: Clean, comfortable and airworthy aircraft, friendly crew and on time arrival; all of which Jetstar achieved.