Terminal: As curfews close several other capital city airports leaving the terminals closed and quiet overnight, Melbourne stays alive with several international and a trickle of domestic movements during the night. That trickle of domestic flights was more like a drought ridden creek by the time I arrived in the Virgin Terminal and lounge around 12:30am – Way past this bloggers bed time!

With 102 of the 176 seats still available for sale as I entered the lounge I was hoping for a quiet flight and a relaxing chill out in the lounge before the 1:15am boarding call. The lounge recently opened up a portion of its new renovations that have dramatically increased the size, and quality of this busy Virgin port. Unfortunately, those constructions  are not yet complete and given the lack of downtime during the day, midnight seems like a good time to get some building done. Thus during my visit to the lounge I was outnumbered by singing constructions workers, nail guns, power saws, the beep beep beep of scissor lifts and, just for good measure, 2 overtired and hyperactive kids.

Fortunately the lone lounge staff member kindly moved me into row 3 and blocked the remainder of the row so i could stretch out if i wanted to. She noted that as those arm rests didn’t retract, i could have all of row 4 instead so I could stretch out on this very light load to Darwin. We chatted for a bit about how great these renovations have been for the lounge, and that we both hoped they would be finished soon.

Departure: Departing from gate 12 I had an interesting experience at the security checkpoint. While putting my laptop and bag through the screening point the screening officer said “You need to take the baby out”, to which I responded “Huh?”, He repeated, “You need to take the baby out”. At this stage I was a little confused, not having any children and also confused as to where this baby was hidden, given by bag was rather small. I asked, “What Baby?”, to which he pointed to the stroller that had somehow appeared next to me, complete with baby. A little puzzled as to where that came from (and why its mother left it next to me rather than with her), I replied “Oh no, that ain’t mine” and proceeded through security. Fortunately fatherhood didn’t eventuate as a result of that security screening.

Boarding commenced on schedule and given the light load was completed pretty quickly ready for an early pushback. It was only us and an Air Asia A330 moving on the tarmac at Melbourne at this rather unpleasant hour of the morning, so our taxi to the end of runway 27 was a pretty fast one, zooming past a row of Virgin and then Jetstar planes on remote stands that had been put to bed for the night. The lighting on the Virgin remote stands shone beautifully on the four 737’s parked there, resulting in each aircraft looking like it was fresh out of the Boeing paint shop and ready for delivery. 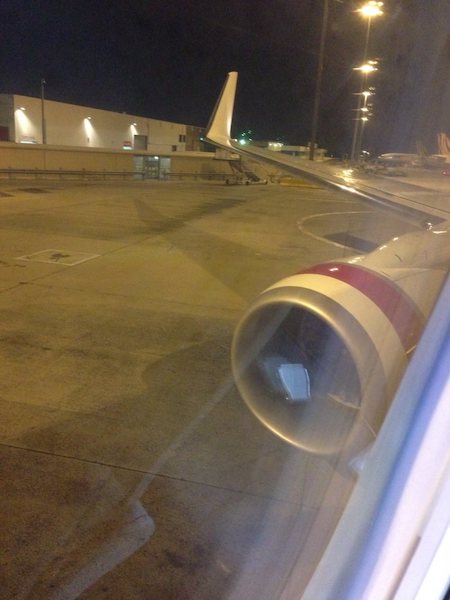 The captain advised we would have a flight time of 4 hours and 8 minutes and that due to a monsoonal depression over Darwin it would be wet and potentially bumpy for our pre-dawn arrival into Darwin. Without pausing as we entered the runway, thrust was applied and we began our take off roll, climbing above a few clouds into the dark moonless night skies. 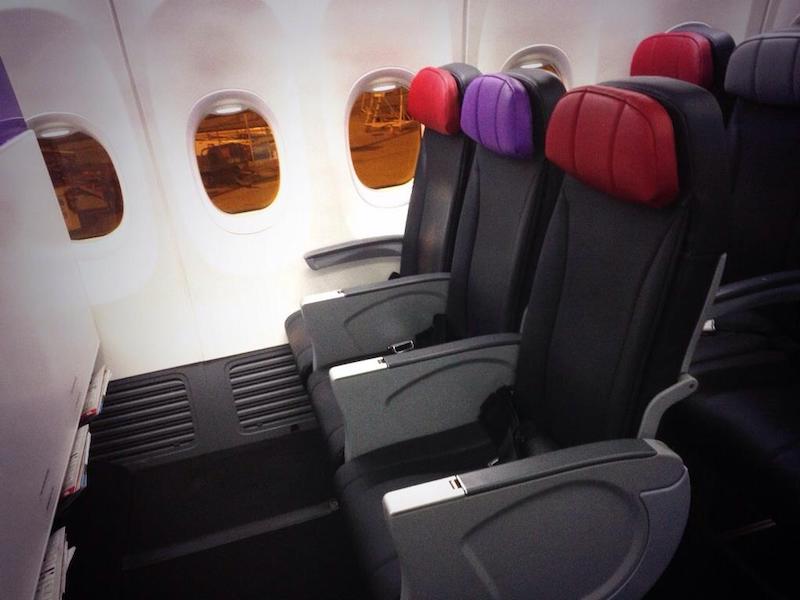 Seat: 3F. The lovely lounge agent kindly blocked out the remainder of row 3, and apparently row 4 as well as my nearest fellow passengers were solo travellers on each side of row 5. This gave me some freedom to move around once the seatbelt sign was turned off. I still maintain that row 3 on a Virgin 737 is the best domestic economy seat available in Australia, however as the armrests don’t go up, its not best if you want to lie down and have a nap. The armrests in row 4 retract all the way back into the seat, meaning no protruding armrests if you want to make a pseudo bed.

In “bed mode” (ok so i just made that up, its clearly not a bed but lets roll with my description), I just fit across the three seats with my legs dangling into the aisle. To avoid them being lopped off by any runaway trolleys, I rested them on the aisle armrest and bent my knees a little. I used my bag as a pillow, as (newbie fail) I didn’t bring a pillow and on domestic legs Virgin don’t provide them in economy. 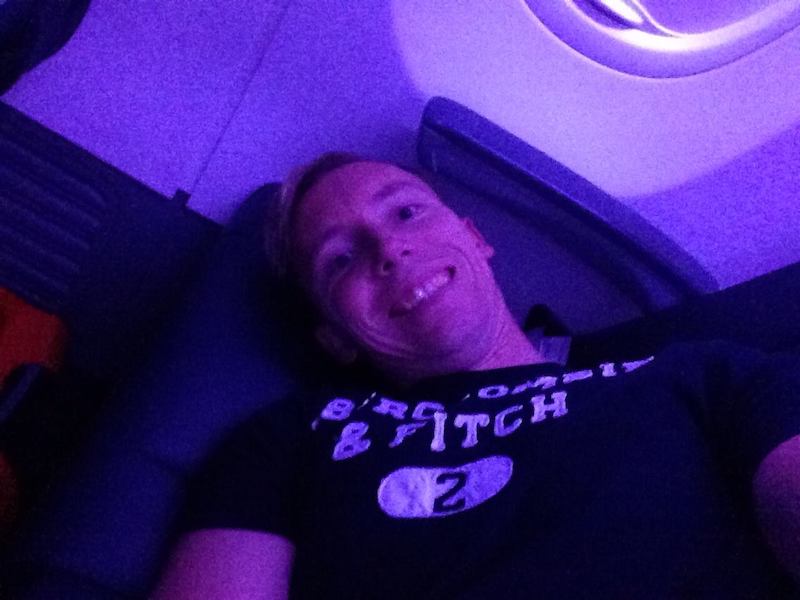 If you’re lucky enough to have a set of three seats to yourself and you’re of average to short stature, then the “bed mode” works pretty well. I managed to get about 3 hours sleep in my improvised bed during this 4 hour flight, which isn’t bad considering. Once we commenced descent into Darwin I moved back into row 3 for the increased legroom.

Aircraft: Boeing 737-800. The workhorse of the Virgin Australia fleet, this particular bird also sported the BSI interior which means bigger and more spacious overhead bins and LED mood lighting which together give the impression of a much larger interior than the classic models. The aircraft is configured with a business cabin of 8 seats followed by an economy cabin with 168 seats. 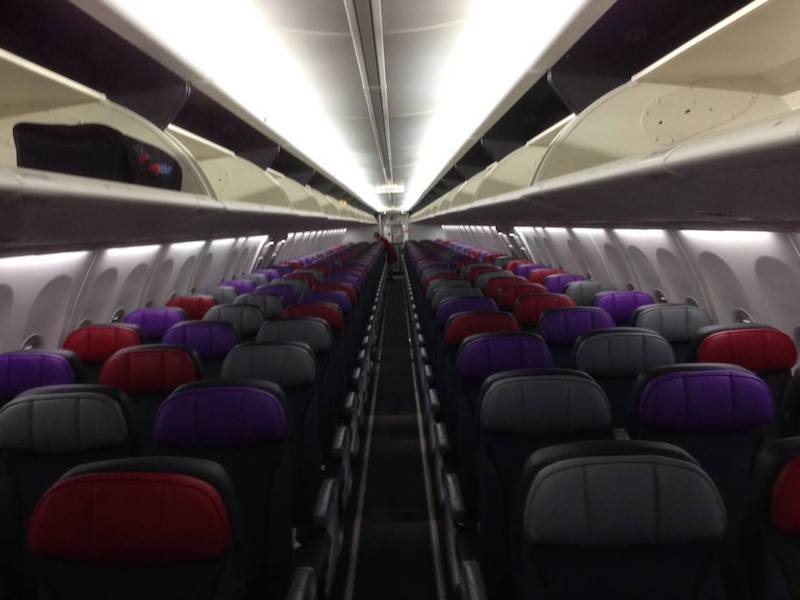 IFE: Steaming wireless IFE was available on this flight, which i accessed on my iPad once settled into a comfortable sleeping position. I jammed the iPad over into the seat tray, then locked the seat tray back in position which provided an ok viewing angle when laying down. As the flight was longer than my usual domestic hops, I decided to watch a movie; Wreck It Ralph, although before the story really started I’d already fallen asleep. I was originally a hater of tablet based IFE options, preferring the seat back options, however the more I use the Wireless option the more I feel that it’s actually not a bad solution. Of course, if you don’t have BYO device, you’re kinda screwed. 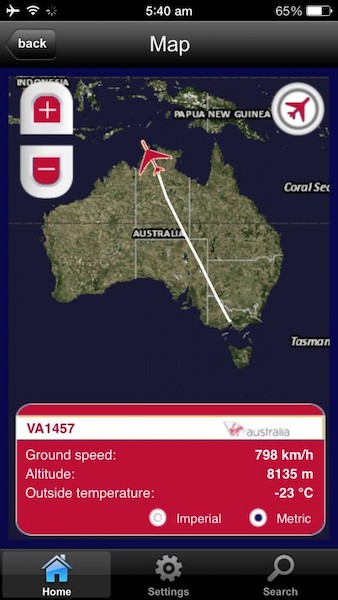 Meal: Complimentary Tea, Coffee and Water were offered on this service with other items available from the buy on board menu. As it was approaching 2am by the time we reached cruise, it was a bit late for any mid night treats for me so unlike me, I didn’t buy anything.

Arrival: As predicted our arrival into Darwin commenced with passing through some higher clouds, before a good tropical rain shower giving the outside of the aircraft a decent wash. At one stage the fast moving water streaming past the windows looked more like we were a submarine than an aircraft. As we entered some lower cloud the wing strobe and fuselage collision beacons flashed and lit up the clouds resulting in a “white, black, red, white, black red” illumination pattern filling all windows.

We cleared the rain for a smooth landing and short taxi to the gate at Darwin airport. Despite a row of planes being visible, photos weren’t possible due to the instant fogging up of the outside of the windows as entered the warm and wet tropical air. Docking at the gate was very fast and before i knew i was saying goodbye to the great crew and exploring the ‘limited’ facilities at Darwin airport. 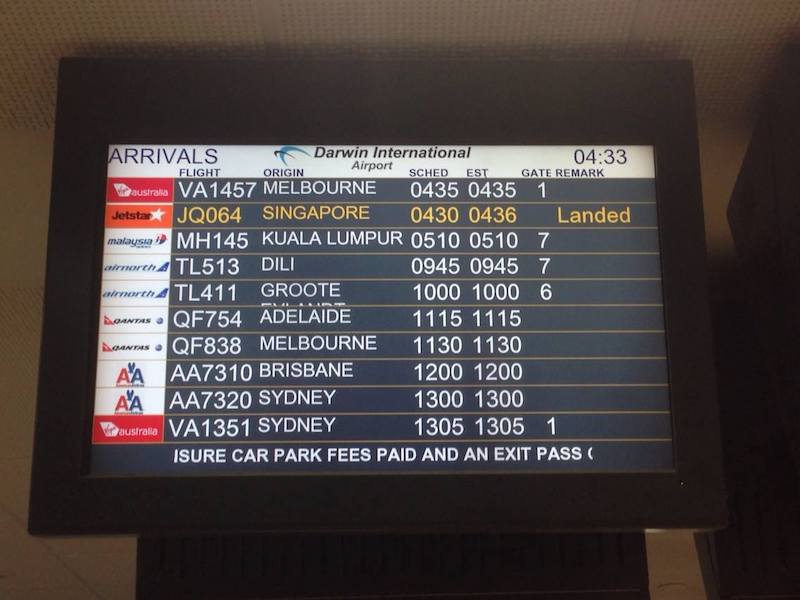 Crew: At all stages the crew that I interacted with were friendly, bubbly, bright and cheerful (which is a great surprise given it is a red-eye flight). I helped the crew close the window shades in my rows (yes, i’m calling both row 3 & 4 mine) which they greatly appreciated. Its always good to be nice to your crew, you’ll find you get much better and more genuine service back if you do (although this really goes for all aspects of life – at least it should). I think its a pretty easy sector for them to operate, as pretty much all passengers went to sleep as soon as they could, and only woke up on decent.

As the crew prepared the cabin for landing I started chatting with them about how long their time in Darwin would be, to which they were surprised to hear that mine was much shorter (only 2 hours in the end). After explaining my #avgeek personality and my chase for Platinum status they were really friendly and encouraging. After landing while we briefly waited for the doors to open, the crew gave me a small breakfast pack to take with me and have between flights as there was no lounge in Darwin. The description of Darwin was ‘limited’, so they wanted to make sure I was well looked after ready for my return flight in Business class in a couple of hours. 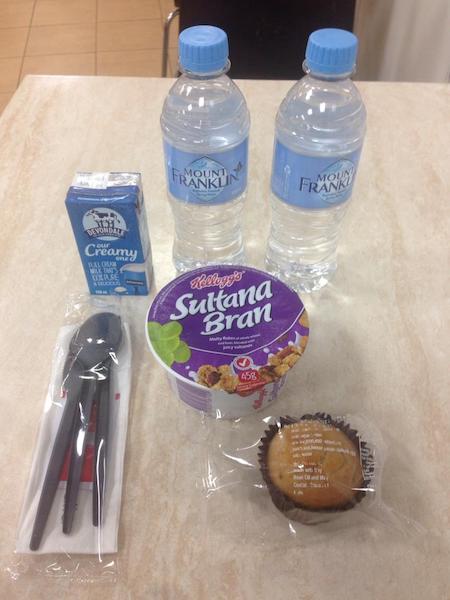 Overall: After having a busy week, not feeling the best, I was tempted to cancel this little status/blog run as the thought of a sleepless night didn’t seem that appealing. I’m glad I didn’t! The light load on this service meant it was easy to get a great little sleep, the crew were amazing and the overall Virgin experience was really pleasing. As a result of this, after 30 something years in Australia I’ve finally visited every state and territory!