Although its the second time this week I’ve flown this route, it was at a different time, and thus a different flight number, thus of course there is a new review. Enjoy.

Seat: 7A. Ok so after getting the ext seat a few flights in a row I decided to try something else so I actually had something new to review (that’s right I actually gave up my exit row seat for the change to review something else). This seat gives you standard economy legroom which is quite palatable for my 173cm height.  The main advantage of the exit row is that if you want to get out of your seat you can without disturbing others in the row, an advantage you rapidly realise when you ask people to get out of your seat. If however like me you enjoy a window seat then row 7 is not for you on this aircraft type a you’ll find the row is missing the windows (instead you’ll just get a panel). As the flight wasn’t that full the middle seat was empty which made it feel very spacious across the shoulders. If the middle seat was full, this seat might feel a little claustrophobic. Luckily for me it was  empty an thus felt pretty good.

Aircraft: Well I can now confidently conclude that Brisbane to Canberra and vice versa are the home of the 737-400. This time I was on VH- TJO which was pretty much identical to the 3 other registrations I’ve flown within the week. So much so that I forgot to take a photo of her exterior. The odd overhead light doesn’t work,  this particular seat’s audio and channel controls are a little hard to turn and the hot and cold taps in the bathroom look slightly newer, but otherwise, it’s the same bird. I had considered using points to upgrade to business today, but to be honest I  don’t see the benefit on such a short flight when the seat is in a variable configuration anyway. That said if someone wants me to review it, email me and I’ll happily accept sponsorship. 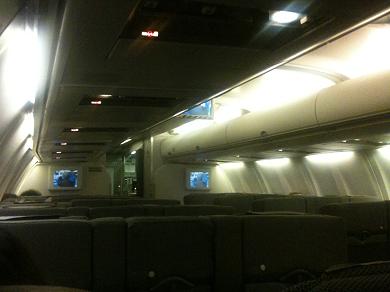 Terminal: Brisbane Airport’s next gen check in didn’t agree with my colleague, however for the first time I used it as my primary check in method using the next gen card. I’m still waiting for the confirmation SMS but as the light tower went green, and I’m now sitting on the plane, it seemed to work fine. I discussed the lack of quiet / relaxation in the lounge last time, so this time I’ll whinge about the security area which feels cramped and disorganized. It’s frustrating that you have to go out of the line to use a table to do the laptop strip prior to the xray then push back in once you’re ‘prepared’. I always find it hard to juggle my roller case (or as I call it, my gay case), laptop bag, jacket and the blue tray that now holds my laptop for the few steps from the table to the xray bench. I’m thinking a food court style tray ramp would be much easier for me. Although this laptop strip as I call it isn’t unique to Brisbane, the combination of the queue that folds back on itself and the lower than normal roof means its more noticeable here than in other domestic terminals.

Departure: Tonight we left from Gate 20, and for the first time in a while there was no queue (although we were in the last group to board). Taking off on Runway 19 we tracked south over Sydney, Wollongong before making a right hand turn into Canberra where the captain advised it was 6 degrees on the way to an overnight low of -3. We thought we were running late for the airport tonight, and  after hearing that news the concept of missing our flight didn’t seem like such a bad idea.

Inflight Entertainment: The inflight evening edition news followed by an ad for the Sydney Art Gallery. I was expecting a complete re run of yesterday’s tape however family confidential was added to the mix tonight. I didn’t really get into the show, and would have preferred to watch last nights Modern Family again (for the third time) but alas change is I guess good.

Meal: Dinner was served on tonight’s flight which consisted of teriyaki beef and rice, carrots and spinach served with a bread roll and mini dairy milk chocolate bar. Beer and wine is provided. At first I wasn’t that much of a fan of the beef as it was pretty dry, however once you mixed it with the rice and small serve of veggies it wasn’t too bad. Although alot of people don’t think it’s worth it to pay extra for Qantas to get a free meal (although often it’s not more expensive to fly Qantas anyway), I find that it’s great to be able to eat something (even if its just a small dinner) on the way home and not have to worry about getting dinner when you land at 9. Thus although people say it’s just a freebie meal, it does help make your arrival a little less rushed once you get home. Also the meals have improved from the old fashioned rubbery microwave type jobs of several years ago. 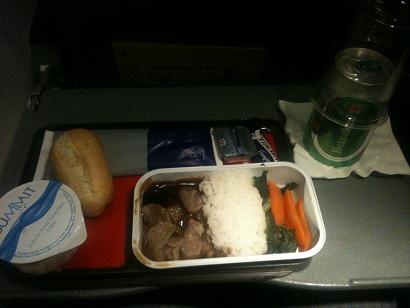 Crew: I think the less than packed flight put the crew in a good mood as they were very attentive and friendly offering everyone a second round of drinks as they cleared the meal trays. Of course these extra drinks haven’t lubricated this review at all. This QF fanboy is still 100% unbiased. The crew seemed to be enjoying themselves, which is a nice touch and it definitely didn’t feel like they were on the last leg of a long days flying (which inevitably landing in Canberra at 9pm, they probably were). In fact given the number of passes they did up and down the aisle for the clean up I think they may have been a little bored, although their body language didn’t show this.

Arrival: Shortly after departure the first officer advised that they expected an early arrival, and given our early departure this came true arriving at the gate about 15mins early. Unlike the last few flights the first officer provided an update just after take off and again just before top of decent. I personally think this is a nice touch as it provides a little more info in where and how we are going for us flight junkies on board. I must say that this was the smoothest landing into Canberra in a long time and after a relatively long taxi we arrived at the gate nice and early. As lately all my flights have been one nighters, It’s been a while since I’ve travelled with checked baggage, so not sure how long that takes to arrive but the chilly taxi rank at Canberra is not the best way to end any journey (Canberra airport operators, take note as you finish building the new terminal).

Overall: A pretty usual Qantas flight, however if it was daytime I would have been annoyed at the lack of a window in this window seat. If I had have bothered to check seat guru or even the Qantas website before I picked the seat this lack of window would have been easily apparent. Also as it’s the first non exit row sat I’ve had in a while, I didn’t really feel squashed in (Although at my height I rarely do). Thus overall it matches Qantas service levels I normally expect, if not slightly exceeding the norm due to the reduced loads. Although we were told to expect turbulence on the approach and it was the smoothest approach and landing to Canberra I’ve ever had – if you going to promise a fun ride, flick the control stick a bit to deliver 😛  I think if you can complain about not having the expected turbulence, then it says it was a pretty good flight.