It was time for a flight, so time for an update. Here is the second “InFlight” review for CarlousMoochous. Tonight’s InFlight is Canberra to Brisbane. Enjoy

Seat: 12A. Good exit row seat by the  window with plenty of legroom. Unfortunately the padding is all but gone in this seat (about an inch lower than the seat next to me) so feel much lower than normal. Once slightly reclined you don’t notice too much. The armrest is built into the door. On other exit rows the seat often misses half the armrest however This one has an extra section so feels alot more comfortable.. Unfortunately there was a very tall guy sitting in what we hoped to be a vacant empty middle seat which cramped me towards the window slightly, although this was compensated by the extra leg room.

Aircraft: Boeing 737-400 (VH-TJG) an older member of the Qantas narrowbody fleet you can notice that it’s a little aged but overall better than the 767s in the fleet. These are progressively being replaced by the newer 737-800’s although it will be a while before they new models with IFE are common place in the qantas domestic market. 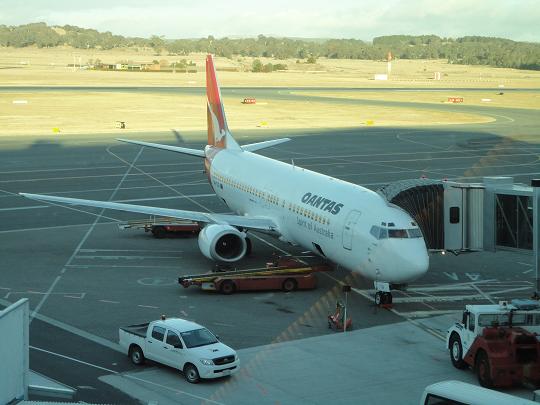 Terminal: Canberra airport has recently been effectively rebuilt and is very modern, clean and spacious. The Qantas club is equally new and is a massive improvement on the old lounge with great windows looking over the Tarmac. My flight departs from gate 11. Although the boards Displayed us as go to gate, the queue for the flight stretched to the entry to the Qantas club, so pretty much no waiting at the gate at all.

Departure: Delayed 25 mins. No apparent reason for the delay. Long taxi (for Canberra) to runway 17 threshold. Departed to the south with a gradual left hand turn around the outskirts before heading towards Brisbane. As the sun has already set great red/orange horizon with the Lights of Canberra below highlighting the planned layout of the city.

Inflight Entertainment: As it’s an older 737 all you have is the CRT’s down the asile and the audio channels. Today’s flight had the news followed by a short BBC show and then Bear Wild (a show I personally aren’t a fan of, fortunately I was writing this instead). Ironically the TVs were displaying the “enjoy the journey” just as we hit turbulence (seat belts on). I couldn’t help think that a ? Should have been on he end of that sentence. ended up watching the show anyway and can’t help but wonder how he always goes into ‘deadly places’ yet the camera man beats him there. Anyway I digress. For a first for me the dials for the channels and volume turn really easily which is a plus for this flight. 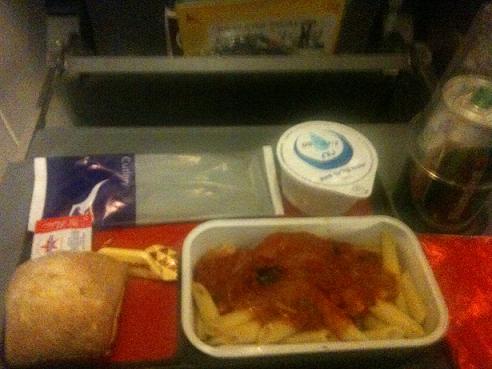 Meal: Dinner was served which consisted of pasta, a cool bread roll and a mini tolberone including  a side of water.The foil container was boiling on serving as was the pasta (presumably due to the delay out? Perhaps in the oven for a little longer than planned). The serving size was pretty good and despite the one olive in the sauce it had a good flavor which was good. Overall good for a short domestic economy flight. As with all Qantas city flyer flights after 4pm there is complimentary beer and wine, which as always I took advantage of a heineken.

Crew: This evenings flight appears to be crewed mainly by an Asian based crew. Perhaps repositioning for a Brisbane departure ? Extremely efficient service provided with the meals collected almost immediately after we finished eating (if you were a super slow eater, maybe too fast). At the back of the plane they were sharing the left over meals from the business cabin – looked a lot nicer than the standard meal.

Arrival: Prior to the top of decent the pilot advised that due to congestion at Brisbane we would be holding for 15mins before landing pushing our arrival time back to 730pm (which ended up being closer to 740 by the time we got to the gate). On arrival the pilot reported a light southerly breeze and a temperature of 12 (hardly the warm Queensland I was hoping for, but sill warmer than Canberra). He failed to mention the lighting behind us as we were landing, so it looks like we came just in time. We landed and taxied to gate 19 which is a decent walk to the exit. After fighting with the GPS, we finally made it to the hotel which is where this post is coming from tonight.

Overall service: Other than the initial delay and the odd bump of turbulence (which really isn’t anyones fault) the flight was enjoyable. The exit rows make a huge difference however this particular seats lack of cushioning was a little annoying (although I don’t think it’s reflective of the entire fleet). Tomorrow I’ll be on the return leg of this flight so will see how it compares on return to the capital.