Terminal: The domestic terminal is to put it simply, massive at Guangzhou. On arrival from the international terminal transfer area on the enlarged golf cart we sought to find the first class lounge to await our connecting domestic flight. We didn’t appreciate the scale until we found a lounge, only to be told hat we needed to use the lounge closer to our gate. After misunderstanding the directions we were chased down the concourse by the agent who eventually lead us in the right direction to the correct lounge after walking past one of the largest security screening points I think I’ve ever seen.

The first class lounge was quite a simple room tucked away at the beginning of one of the concourses. A tropical fish tank separated the food area from the rest of the lounge, where lounge seating was rather closely packed together. There was a decent selection of food available free of charge however given I had just had lunch prior to landing I passed and instead had some fruit and a few beers. Fortunately there are 2 drinks fridges, one turned in for those who like their beer cold and one off for those who like theirs warm.

Departure: There was a departures monitor that rotated between English and Chinese On the wall of the lounge however there were no overhead announcements within the lounge itself. Each time a flight was ready to board an agent would walk around the lounge yelling the departure (at least that’s what I think he said, it was in Chinese but I could make out the city name so put two and two together). I’m guessing the announcement is supposed to be more personal but think an overhead speaker would be more effective. Right on the boarding time the I heard ‘Guilin’ in the agents announcement so headed for the gate.

The walk to the gate was a reasonable distance so we made use of the moving walkways this time and were thankful we didn’t have to walk from the other lounge. The economy queue to the aircraft was long but fortunately the first class line was easily marked out and had no one waiting. For some reason my boarding pass failed but I they agent pointed me to the aircraft anyway. After settling into our seats we pushed back very early and were airborne a few minutes layer after waiting for a company A330 to land before us. 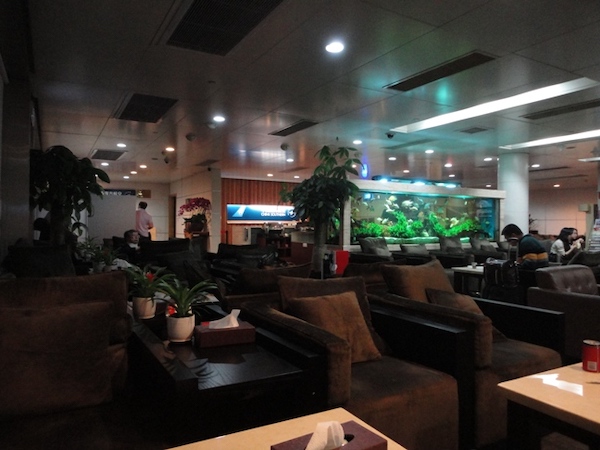 Seat: 2C. Although originally assigned 2F the 8 seat first class cabin only had 4 on board so instead of sitting next to a stranger I moved to 2C next to my colleague. The seats are similar to the dragon air A321 business class seats although slightly more comfortable. The tray table folds into the arm, there is a separate cocktail tray and a retractable footrest in the seat in front. I actually found this footrest useful, which is odd as most. Of them area waste of time for someone my height.

Aircraft: The Airbus A319 is setup in a 3 class configuration, which is different for such a relatively lower capacity aircraft. The first 2 rows are 2-2 business followed by a few rows of 3-3 premium economy and then 3-3 standard economy. Thankfully this aircraft had personal air vents so temperature control was not an issue like on the A330-300. The first cabin was separated from the main cabin by the curtain after take off and felt quite private and comfortable (especially given the 50% loading). The aircraft felt relatively new and in good shape, and the engine noise wasn’t as loud as other A320 family aircraft I’ve flown. 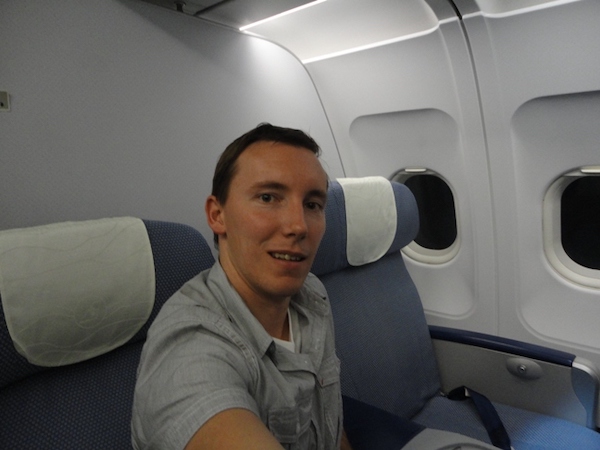 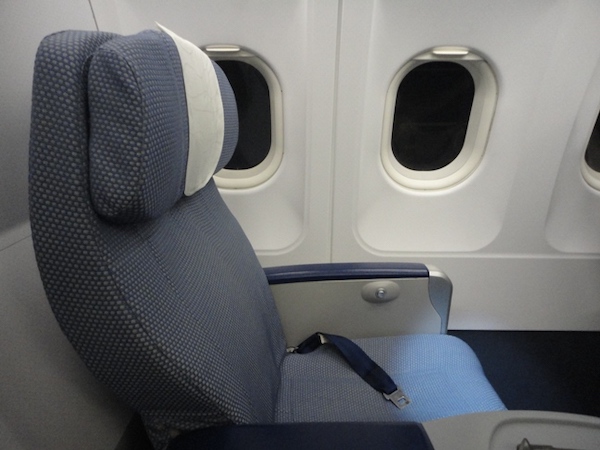 IFE: For the short 50min flight to Guilin the overhead screens folded down and played some local shows, none of which were in English. Interestingly each time a show finished the crew changed the DVD in the overhead locker above 1C with the new show. I was tempted to give them one of my DVD’s to play but I guess that would breach copyright, and probably confuse the other pax on board. I didn’t have. Instead of headsets the audio was played over the loudspeaker which was something different to what I’m used to.

Meal: On boarding we were offered apple or orange juice or water and shortly were asked what drink (from the same selection) we wanted during the flight. I went applied juice twice but was surprised that no beer or wine was offered. After take off the table was set with a white table cloth before a plate of fresh fruits with a side of desert snacks was offered along with the second juice. Although lovely food, I wasn’t that hungry so just picked at it for a while before the crew cleared it before landing. 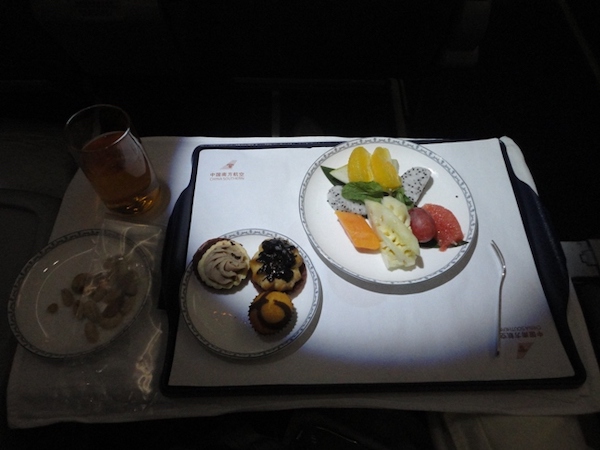 Arrival: As we took off early we were expecting an early landing and despite some miscommunication from the crew towards the end of the flight (we were told that landing would be in 50mins, which was actually 5mins) we touched down with a thud in the dark Guilin airport. After my shocking Air Asia landing in the dark at KL earlier this year I’m a bit tense when coming into an unknown airport in the dark now, which probably exaggerates my perception of a hard landing in dark conditions these days. A short taxi and we were at the gate and glad that this was the last flight of the day.

Being first out of the plane is always a nice feeling (sadly I don’t get to experience it often) after which it was a short walk downstairs to the Perspex fenced luggage claim area on the ground floor of the terminal. Unlike most airports staff check every baggage receipt to the bags you take before you leave, which is good for security but not so good if you loose that bag receipt. Fortunately I had kept mine so we were out and into the waiting hotel car and ready to get some well earned sleep pretty quickly.

Crew: Onboard the crew were very friendly and attentive and despite their limited English, it was enough to get by (remembering it’s a Chinese airline in china, you can’t and shouldn’t expect fluent english). Hot towels and English newspapers were served very quickly and each time you opened anything to read they would quickly turn on your overhead light for you. They also cleaned the toilet after each use which although unnecessary for such a shirt flight and few passengers was a nice touch.

Overall: Although it was such a short flight the quiet cabin, bigger seat and snack (even though I ate very little) was a welcoming sight after the connection from Australia. I think the soft product could have been improved with some wine or beer, and then would be similar to domestic business class in Australia. Having said that, on a comparison basis, overall I think it was better than the China Southern long haul service, although I wouldn’t want to be there for more than a few hours.

Don’t forget to check out my long haul China Southern review in the InFlight section of my site and if you liked this then leave a comment below and share it with your travel savvy friends on Facebook or twitter.