Bonjour from Paris (spoken with a try hard French accent) seems like an appropriate greeting to our first cultural day in the French Capital. Today we left Val d’ Europa, the home of Disneyland Paris and took the RER A train line into Paris for the next few nights. Thom and I have both visited Paris before, albeit separately, so we decided to skip the ‘must do’ touristy things in Paris for the day and explore a little further afield. It took a little over an hour to get into Paris, drop our bags off at a rather swish looking hotel near the Eiffel Tower and then take a variety of Metro, RER and R line trains out to (the lovely to say with a French accent), Chateau de Fontainebleau. 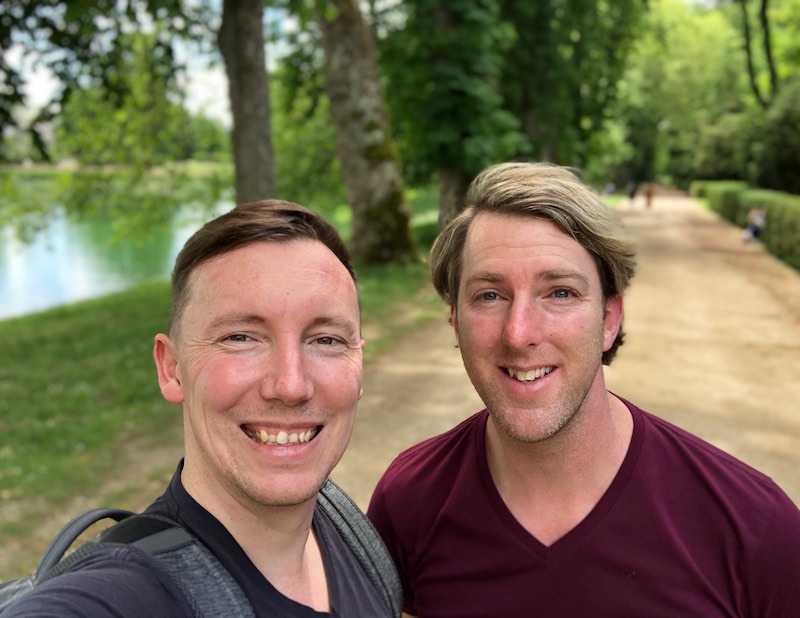 Google Maps attempted to sent us on quite the scenic route to Paris’ Garde de Lyon station where our regional train heading towards Montreau departed. Fortunately, having passed the station on our way into Paris this morning, I ditched Google and got us to the station via a much faster route. Once we left Garde de Lyon we quickly built up speed on what was a relatively express train ride with only 2 stops between us and Fontainebleau Avon station. After making the two uneventful stops the train began to slow as it passed through the forest that surrounds Fontainebleau. An announcement was made (in French) that seemed to include Fontainebleau Avon and the train pulled to a stop. We, like many other non French speakers on board, presumed this message was announcing the stop of Fontainebleau Avon. The doors opened and we hopped off the train, noting something wasn’t quite right. There was no platform, just dirt surrounded by forrest with some trails leading into the woods in differing directions.

With about 30 people looking rather puzzled at this random stop, I asked a local on the train who let us know that this wasn’t the right stop. We were one of the few people to get back on the train before it closed its doors and proceeded onto the actual Fontainebleau Avon station a few minutes down the track. This was not before leaving most of the English speaking passengers in the middle of the forrest looking rather confused. While it looked walkable into the town from this makeshift stop, I’m glad we got off at the real station. I wonder what happened to those that got off or if they are still wandering through the woods in search of the Chateau. 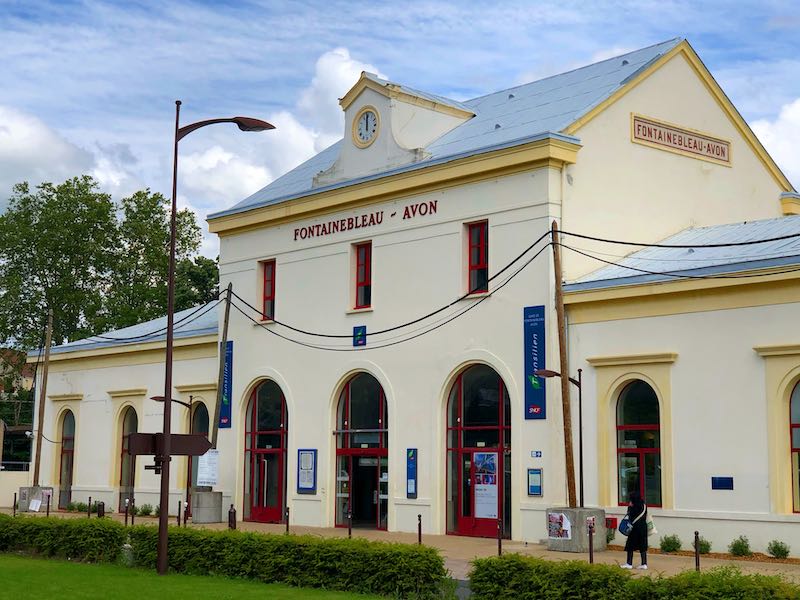 The Chateau itself was about 3km from the train station, and although there probably was a local bus service, we decided to take the scenic walk through the town and parklands instead. The town was cute with many small homes and a few low rise apartment blocks but it wasn’t long until we came across the park walls and were outside the town streets and walking through beautifully green parkland. The colour green was the first thing that really caught our attention and was a point of difference from home in Melbourne. If we had travelled 40mins from the heat of Melbourne by train (we’d probably still be in Melbourne) but it would be dry. Brown and shades of greeny brown are what generally greets you back home. Here it was green like you see in photos or the green that kids use to paint grass.

Walking along the trail to the Chateau we pondered what our two dogs, Max and Louis would think of walking in this park. The grass is just the right length that would allow them to frolic in and bound across the meadows. If you can’t tell, we miss our furbabies when we travel.

The plan was to go to the town centre for a bite of lunch before exploring the grounds and Chateau. On first glimpse of the gardens we took a slight detour to view the beautiful swans floating on the pond that extends parallel to the forest. I call it a pond, but it stretches for hundreds of meters. Is that still a pond or is it a lake? Arriving in town I had a lovely chocolate and banana crepe and Thom went all healthy with a salad. Sadly the pineapple and curry never arrived with the salad. With bellies full and energy levels restored we made of the Chateau proper.

The first thing we came across was a fountain that another couple described as the best part of the visit. As we approached, we both were thinking, “is that what we think it is? Are those four dogs pissing?”. Sure enough as we got closer it was clear that we were spot on. The fountain’s water jets all came out of each dog, making it appear that all the dogs around the statue were pissing into the fountain. Talk about a laugh out loud moment. 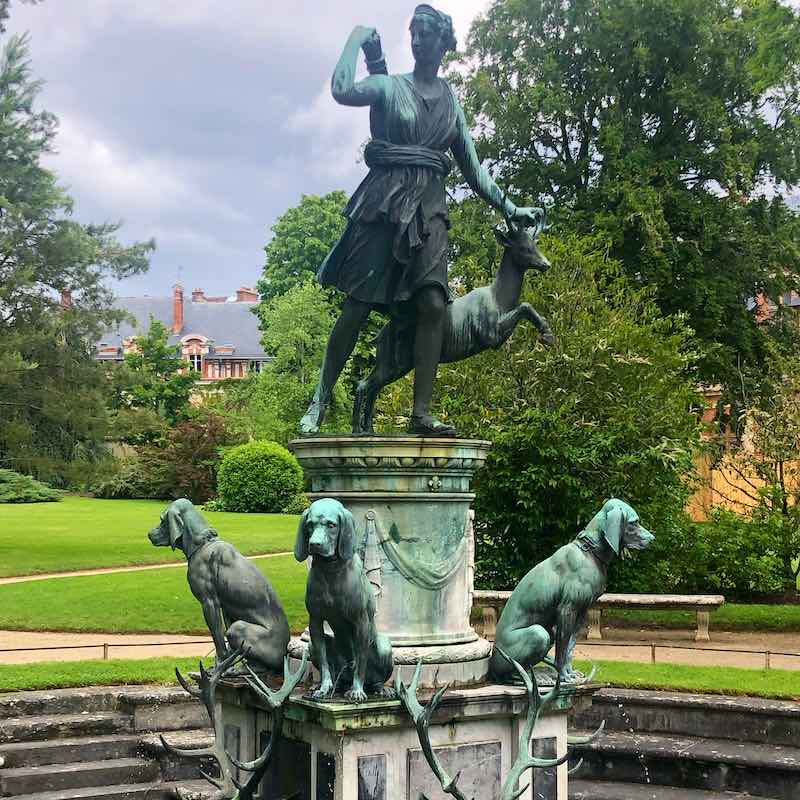 Entering the Chateau we were required to check our bag in a locker and collect the audio guide (€4) before taking the self guided tour of some of the 1,500 rooms in the complex. The first thing Thom and I noticed was how little we now about French history. Our entire knowledge comes from the TV series Versailles in which Louis has quite a lot of sex. I’ll do some further research at a later point, but what he learnt as we moved from room to room was as follows.

Each room was seriously over the top in the amount of art and decorations. We could have spent hours listening to the audio guides for each room but just looking at the works and using your imagination was just as good. On a side note, if you did actually listen to every part of the audio guide you would need to be there for 5+ hours… Even the halls and passages are massive. The hall pictured below is over 75m long and looks pretty magical. 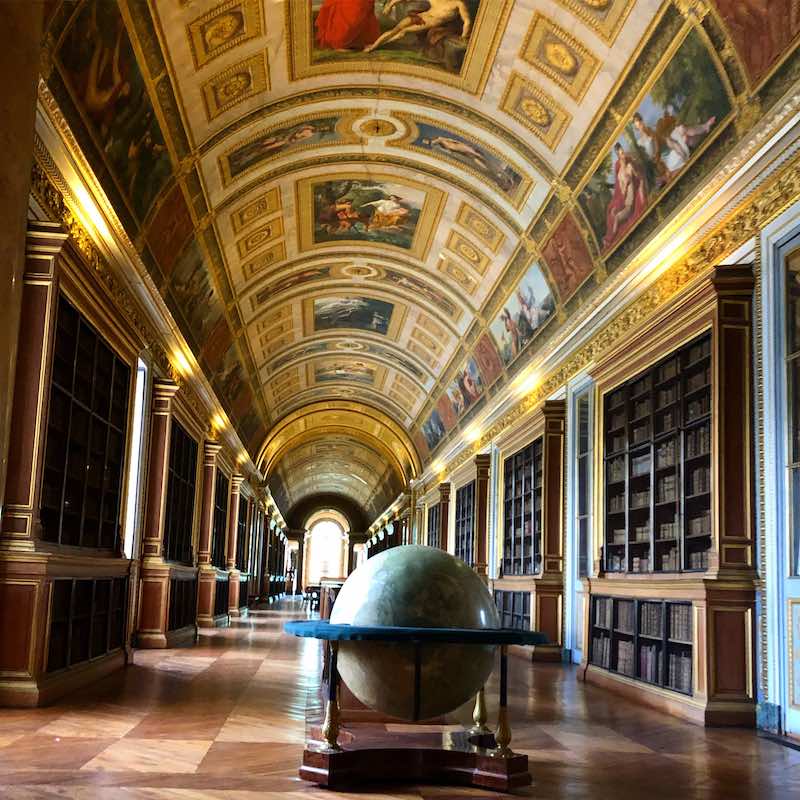 We explored the various exhibitions within the many apartments in the palace before exiting into the beautiful courtyard by the lake. The sun had made an appearance after a cloudy morning so we took a leisurely stroll around the gardens taking in the views of the palace from all angles. A younger British couple took one of the many row boats out onto the lake for a romantic voyage and,  fitting to the character of the complex, a small group were taking a guided tour of the grounds by horse and buggy.  I took a photos from many angles before we decided to call it a day at the Chateau. We retraced our steps back through the woods and to the railway and caught the next train back to Paris. 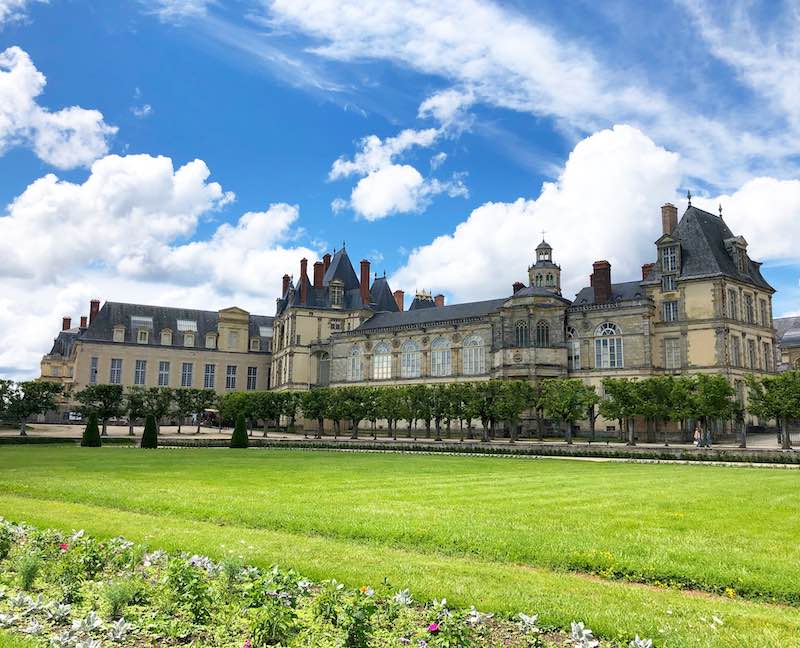 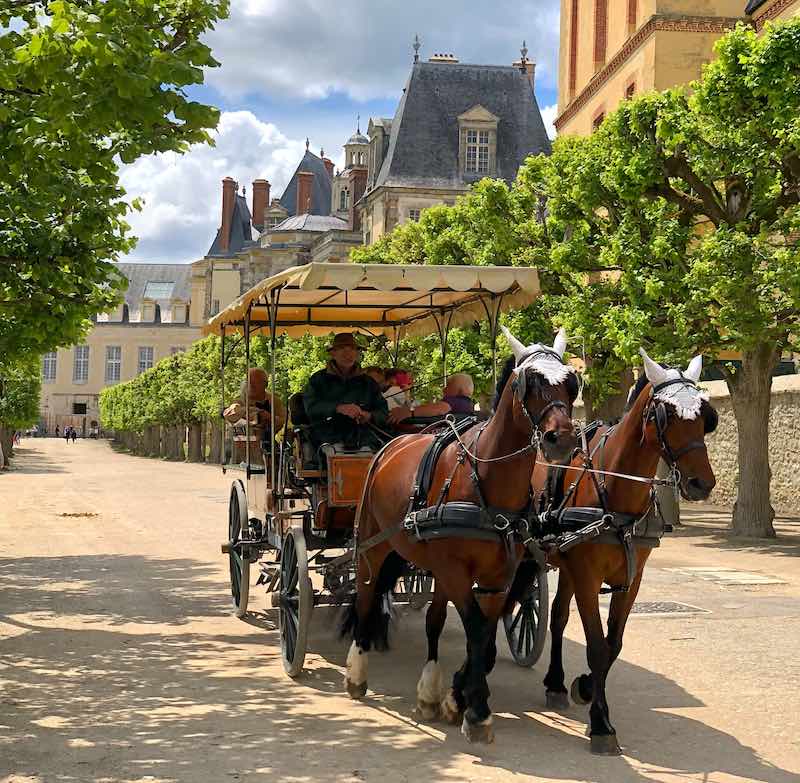 The train back to Paris seemed newer and had softer seating than our earlier train and made no unscheduled stops in the forrest. An announcement informed (well we presume it did, it was in French) travellers that the service was delayed. On arrival back at Garde de Lyon the train abruptly came to a stop midway along the platform, with the last few carriages not reaching the platform. Our carriage was the last to have somewhat of a platform to exit from, while people from the carriages beyond simply walked along the neighbouring tracks. As we walked towards the Metro transfer, we passed the engine of the train which it appears the driver had just had enough and called it a day early. We ended our day having some reflection time at our beautiful Paris hotel room before heading out for some lovely Italian for dinner. We are still adjusting to just how late the sun is out here. Being used to coming home at 5:30pm in the dark, the 9pm broad daylight here is something we’re adjusting to. Walking home from dinner we stopped by the Eiffel Tower for the mandatory selfie. We both noticed that the level of security and fencing around the tower has changed significantly since we each had previously visited. Tall glass walls now surround the tower with security checkpoints for paid visitors going up the tower replacing the long lines that once weaved freely around the tower. Tomorrow we head off to Versailles, which hopefully will extend our knowledge of French history a little more. For now it’s time to say ​bonne nuit!
(Visited 8 times, 1 visits today)