After a few days of theatre and shows in London it was time to visit a new country, Switzerland. Thom had already visited many years before, but this is my first time in the land of numbered bank accounts, fine watches, cookoo clocks and delicious chocolate. We flew from London City Airport and landed into the financial city of Zurich were we based ourselves for three nights in the old town.

As luck would have it we landed on the last day of the Pride Festival in Zurich. Wandering the streets we soon found the parade route with thousands of people out in force on this beautiful summer day to get involved and support the LGBTIQ community. It was really great to see a huge mix of people in the parade and looking on. Obviously there was the LGBTIQ community but also lots of allies and supporters and many families coming along and either marching or enjoying the festivities. The parade itself seemed to go on forever with no urgency as floats stopped and danced till they felt like moving on. Although neither of us are really into the ‘scene’ much, it was great to feel as if LGBTIQ was normalised in the city full of thousands of friendly, happy people.

The parade route ended by the lake where there was a carnival atmosphere with various food stalls on one side of the river and a large stage and dance party area outside the opera house. After an afternoon of sightseeing the parade and around town we stopped by the stage area to check it out just as the heavens opened. When it rains here, it really rains. We rushed back to the hotel before the heaviest of the rain and thunderstorm began. It sounded like the party continued into the evening but for us, the night was over. 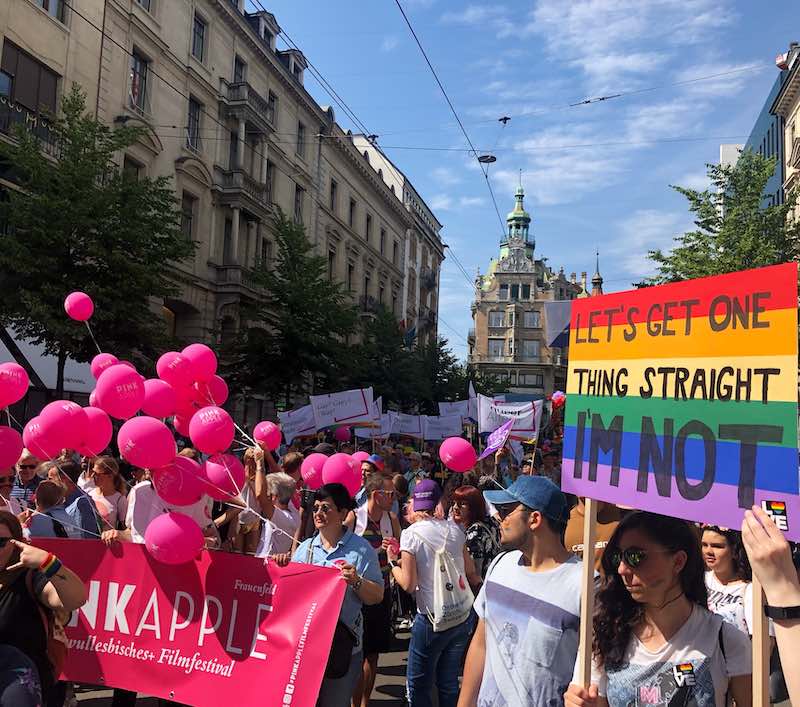 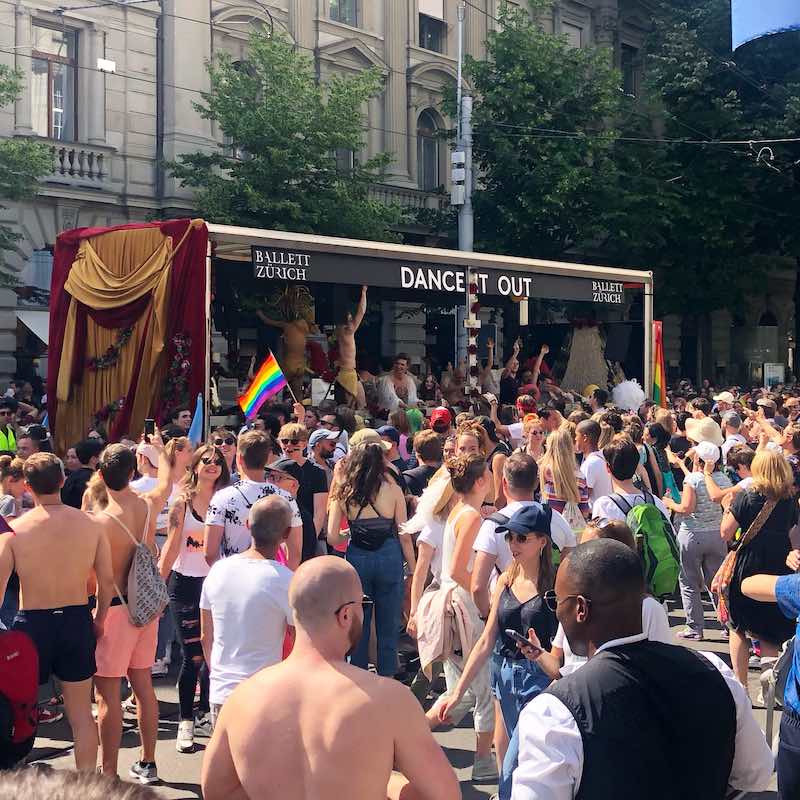 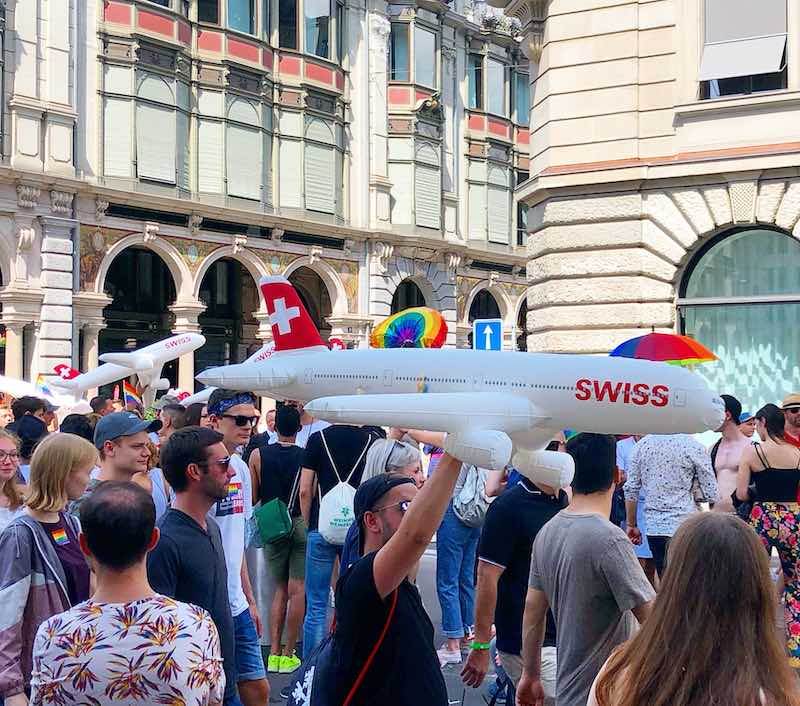 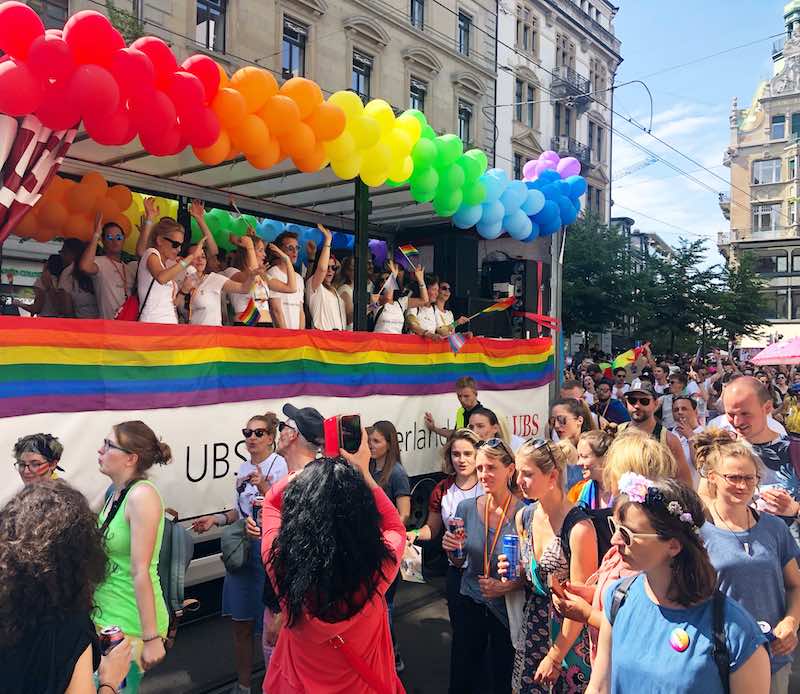 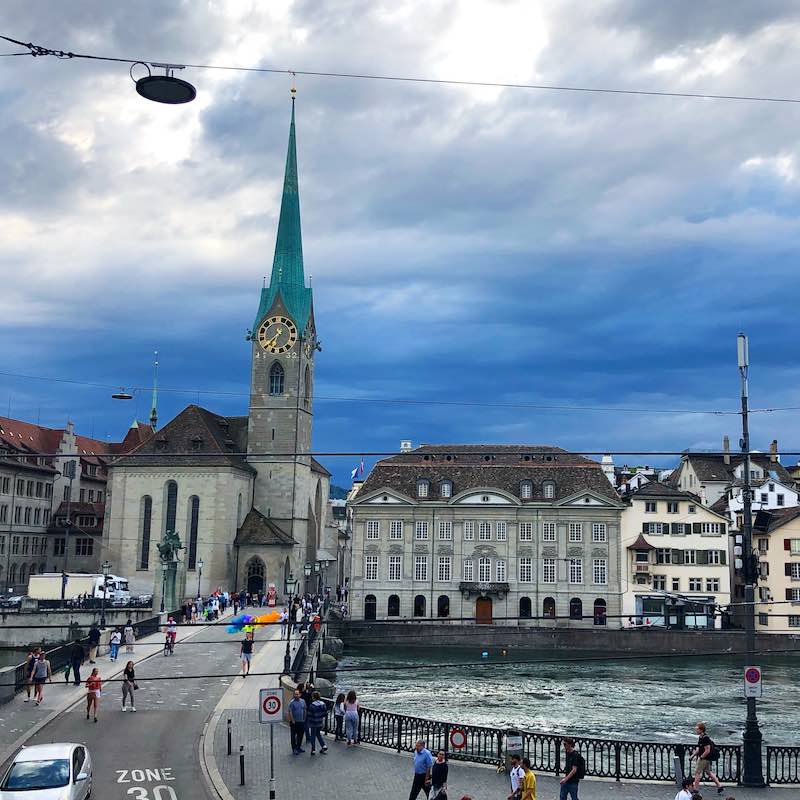 The following day we picked up our rental car and did a drive around the castles of Aaruga which i’ve already written about here. It was an amazing day out and nice to get out of the cities and into the countryside. On arrival back in Zurich we parked for the night and got a pretzel sandwich and Movenpick ice cream for dinner. to wrap up our first day driving around the Canton of Aargau in Switzerland. I’ve said before that parking is my great fear of driving around Europe, mainly because of the lack of space. Driving into the Opera Parkhouse’s lower levels was like driving through a mail chute. It as soo narrow to get down there, but once down, fortunately very spacious. Why do Europeans make roads only just big enough to fit a car… the scrapes on the walls show there is no room for error at all.

I’m not sure if it was the late in the day salami pretzel, the ice cream or something else but whatever I ate yesterday didn’t agree with me. As anyone who knows me will attest, by stomach is the most sensitive beast there is. I have medical diagnosed Irritable Bowel Syndrome, which is basically medical jargon for, ‘your bowel is screwed up and we don’t really have a diagnosis’.  As a result I often get bouts of gastro where other people would be fine. Sadly our second day of sightseeing in Zurich was cut short as my stomach wouldn’t let me go far from the bathroom. I’ll spare you the graphics, but after a day pretty much in bed, some pretty plain food and a couple of dissolving imodium, I was ready to face the world again as we checked out of Zurich. 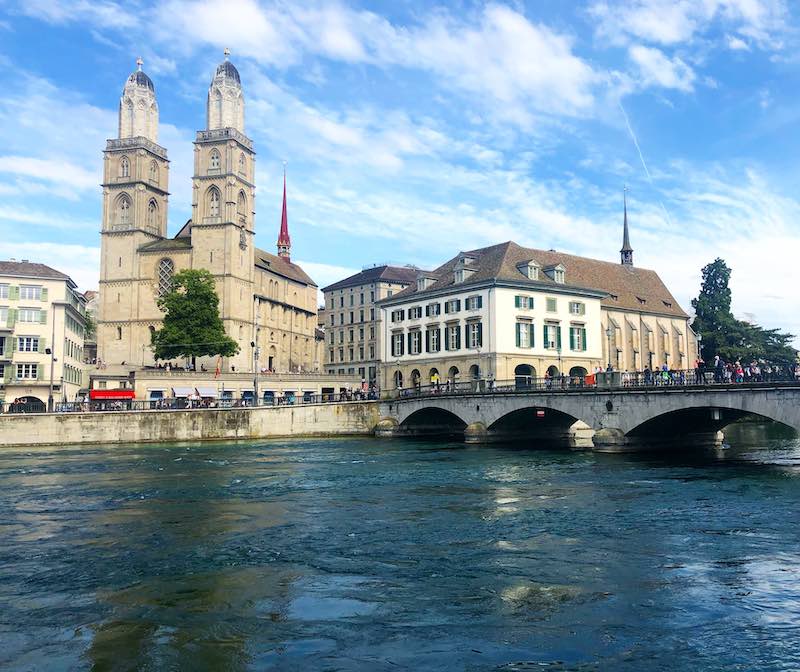 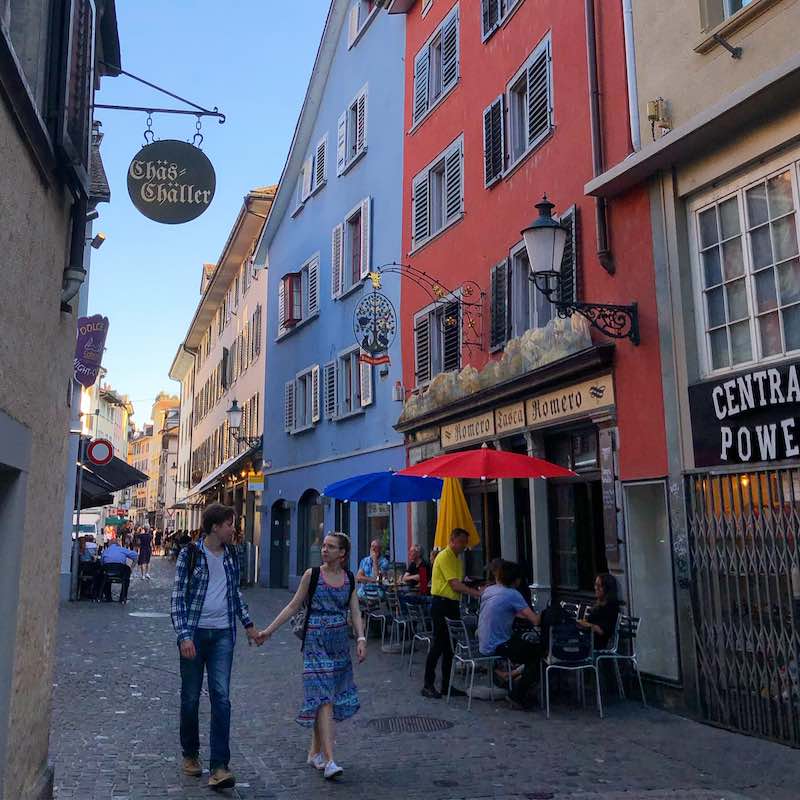 Despite seeing Zurich mainly through the lens of Pride and with an upset stomach, it is a very beautiful city on the lake. Although primarily described in guidebooks and online as a financial centre or hub, which it is, I feel this doesn’t do the beauty of the city justice – although the money probably helps. The city is located on the end of Lake Zurich and the river Limmat passed through the historical old town of the city. I’ve mentioned it before, but the clearness of the water here, and the speed in which rivers flow, is amazing. Standing on a bridge in the centre of the old town watching the clear water rush past beneath is pretty different to the murky Yarra river slowly discharging into the bay back home. 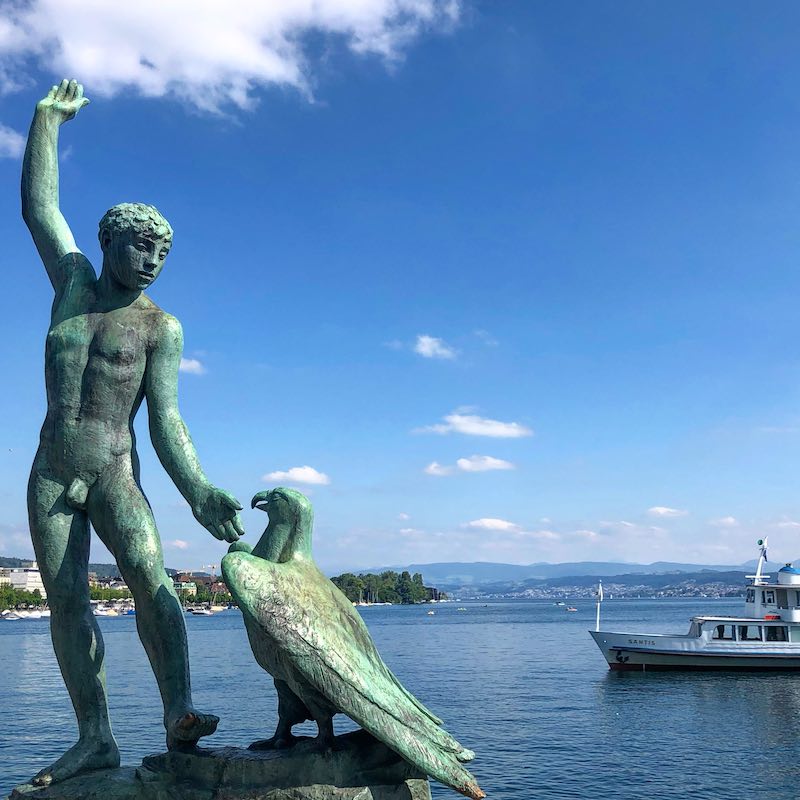 Being summer, the river and the lake seem to be the place to be for young and old alike. On a Monday afternoon stroll around the town everyone seemed to be near the water. Large lawns are filled with picnics, sunbathing or playing games and the swimming pools were packed. While the statue above does bare all, the locals aren’t afraid to show a bit of skin or merely jump into the water in their underwear after a day at school or work. It seems like everyone flocked to the lakeside and caught up with friends and when the sun got too hot they strip down and jump in the lake.

The swimming pools here are not like at home. They are built either over the lake or river and basically are a section of the lake or river with boardwalk around it, and maybe some lane ropes. The one in the town on the river is for women only, while the lakeside ones seemed to be co-ed. We didn’t go, but we couldn’t work out why people used them when they could just as easily (as many people were doing) swim in the lake instead. Is it a place to be seen? Whatever the reason, they were overflowing with people enjoying the high twenties temperature and relaxing in the cool clean waters of Zurich lake. 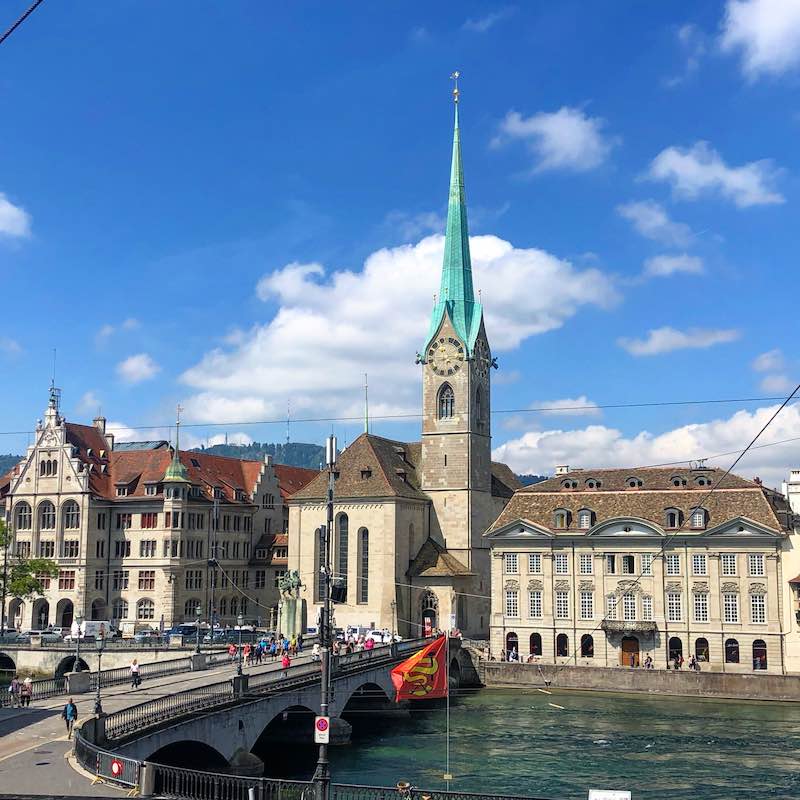 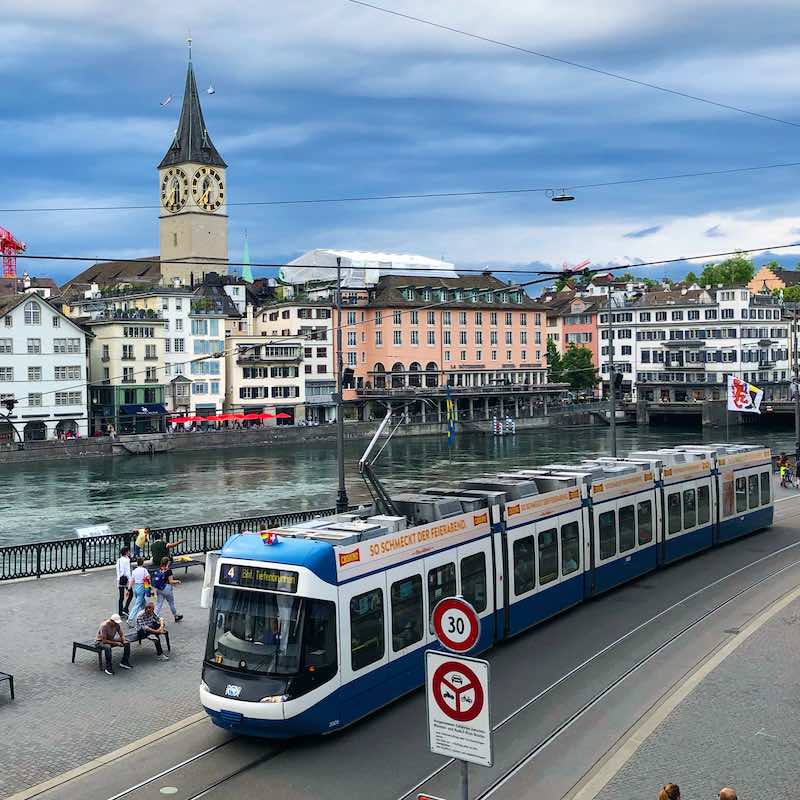 While the lake and river provide the natural beauty, the architecture of the old town brings its own charm. If I had to live with the restrictions that old town’s impose on a daily basis I might understand, but why we moved from the beauty of buildings into merely places of function is bizarre. The buildings here are beautiful yet are also intertwined on the outskirts of the old city with modern concrete designs that don’t do the city justice. A walk along the river takes time as you admire each building and church spire, each of which seems to try to gain the attention of passers by with their different styles and colours. While some new buildings try and be creative or different, the square box design to fit parallel running streets is the norm in our modern world. I love it how old towns use space in such a different way, with streets seemingly unplanned running across and around the city. While it may seem inefficient, every bit of space in these buildings seems to be used from the basements which house bars and restaurants to the attic’s that are converted into bedrooms. 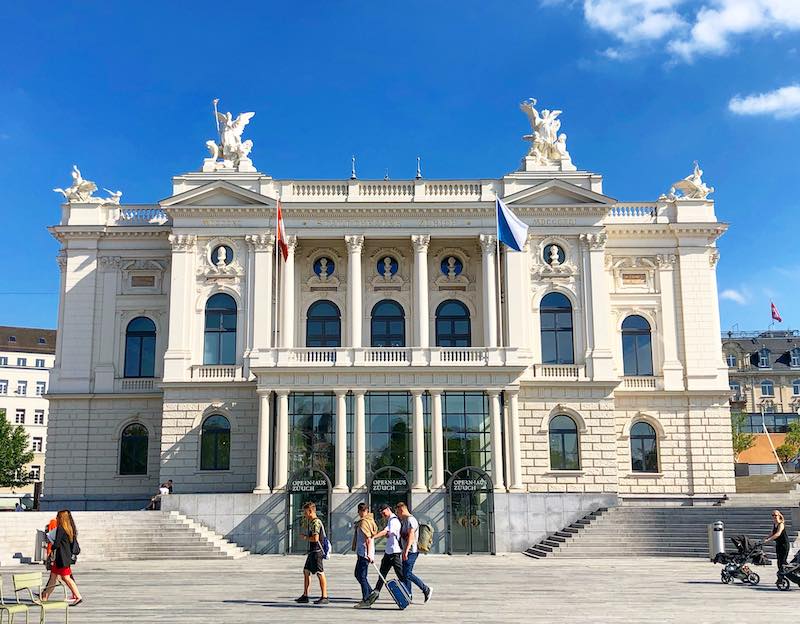 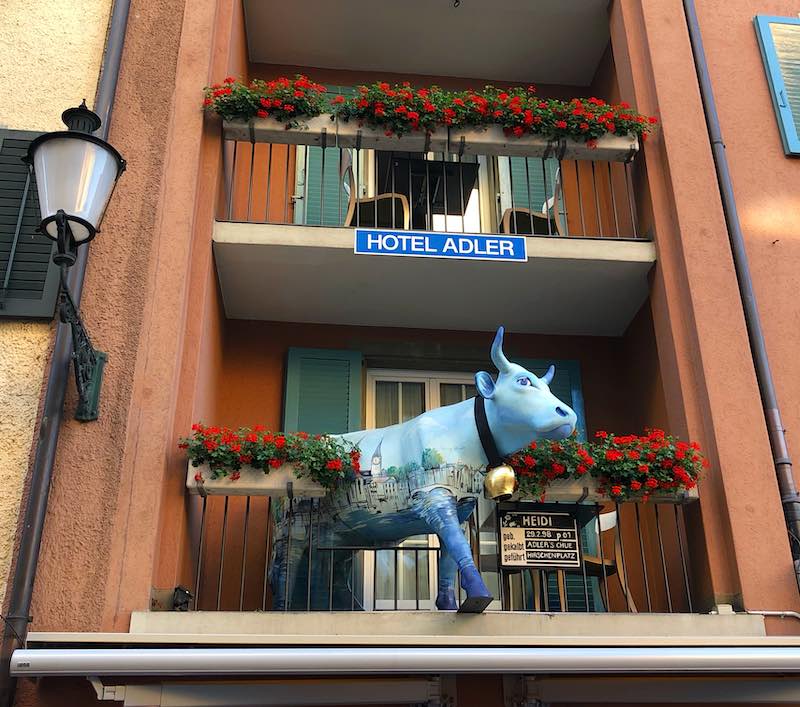 Despite having a shitty stomach, we did manage to try some of the local food (which may have been the cause). Sausages and schnitzels are abundant everywhere as is beer by the gallon. Finding affordable food is pretty hard. Zurich, and Switzerland, is expensive. As a local at dinner was explaining to guests on his end of the table, while the salary is high, everything costs a lot too, so many people can be poor in this expensive city. That said, we managed to find a cheaper alternative to hotel breakfasts (which were 29 Swiss Franc per person – about $60AUD) by going to the local Lidl supermarket and making our own continental breakfast for about 15 Franc for 2. While eating did drain our supply of Francs each night, it was a beautiful city that I’m glad we spent some time visiting, even if they have the occasional cow on a balcony. 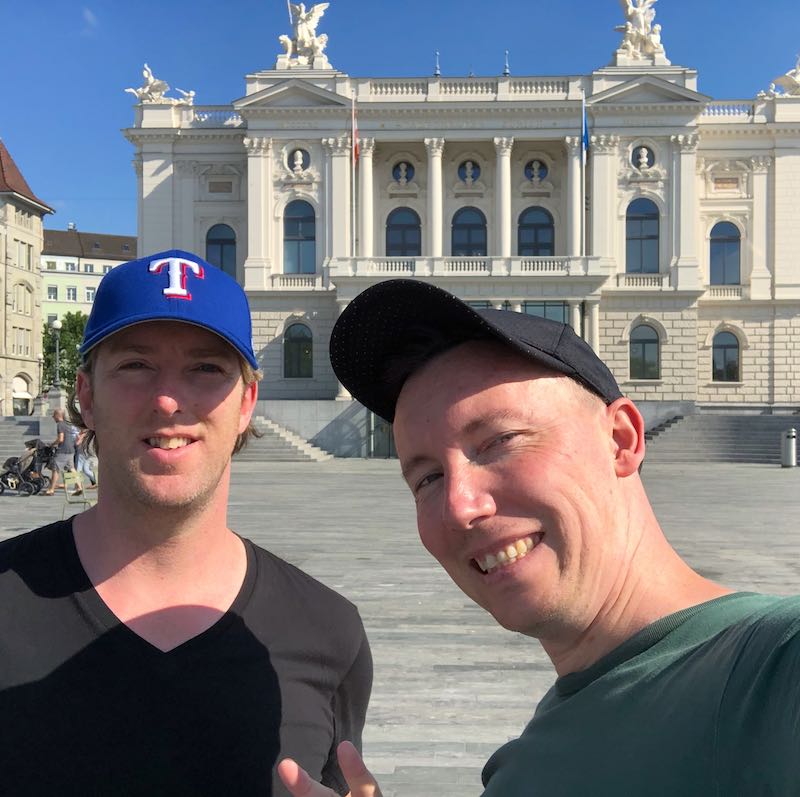