Windmills, Waffles and Clogs: A day trip from Amsterdam

If you have read any of my previous blog posts, you’ll probably be aware that I’m quite the nerd. If you are a first-time reader (hello and welcome), then my next revelation will catch you up with what everyone else is already been thinking for some time. I am an out and proud nerd. To prove this, during a bout of coronavirus isolation induced online shopping I recently purchased a copy of the 1913 edition of Bradshaw’s Continental Railway Guide. The guidebook came to my attention after watching several episodes of the great railway adventures hosted by Michael Portillo. The guide is effectively a lonely planet / travel magazine from 1913. Instead of country specific guides, all of continental Europe is lumped into one guidebook (complete with railway timetables). I was always curious how a TV series is based on the readings from 1913 so thought, why not have a read and compare some of my travels with those in the guidebook.

The destination of choice for today’s walk down memory (and history) lane is a day trip out of Amsterdam during a holiday in October 2017. Before we get to that, a bit of background as to how we ended up in Amsterdam. We’d taken the train from Leeds to Manchester and then flown direct into Amsterdam. We had made our way to Amsterdam after spending an extended weekend in Leeds with family. Our flight with FlyBe (now defunct) took a little over an hour and half to arrive into Amsterdam. 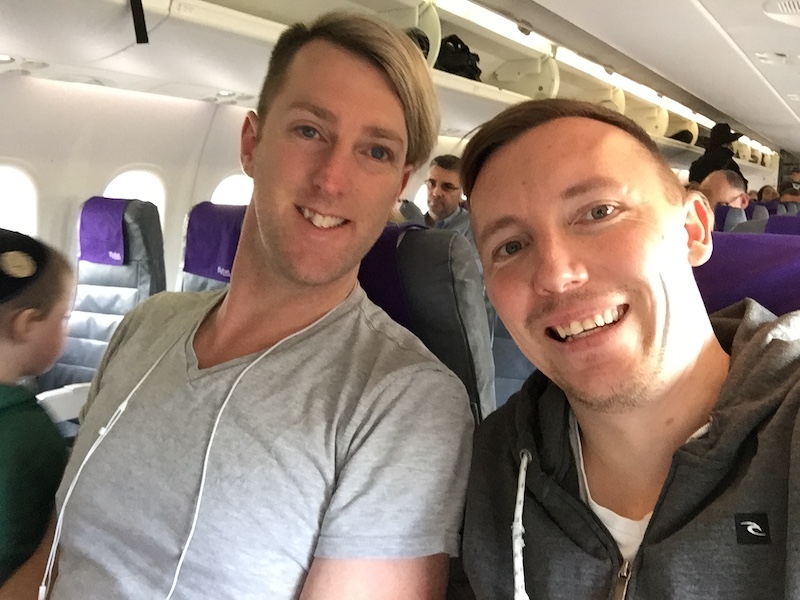 While I’m yet to fully appreciate how to read Bradshaw’s, it seems the journey in 1913 would have involved quite a few connections and taken a lot longer than our 2017 journey. Given the Wright Brothers first flight was only a decade earlier, the most convenient for us had we been travelling in 1913, would have been the Hull to Amsterdam Steamship. The steamship company advertise in Bradshaws “regular communication for goods and passengers between Hull and Rotterdam, Amsterdam and Harlingen”. The journey from Hull to Amsterdam departed on Wednesdays and Saturdays and unlike our journey where we simply searched and booked flights online, we would have had to visit the Steamship company office in Leeds to find more details such as the time and duration of the journey.

With aviation available to us, Amsterdam Airport was welcoming and efficient as some pretty attractive border guards processed our arrival into the Schengen region. A quick train ride into Amsterdam and before long we were settled into the lovely Kimpton De Witt Amsterdam ready to plan out our sightseeing in Amsterdam. Given Amsterdam’s laid back vibe, I had a giggle when we were assigned room 420 in the hotel. This was my second trip to Amsterdam and Thom’s first. To get some ideas, we had a chat to the concierge during the evening drinks hour about seeing some of the Dutch countryside. He suggested a group tour of windmills and lakes, but also noted that we could do it ourselves with a city transit pass.

The next morning we set off to Amsterdam Central Station, purchased a 24 hour transit pass and were soon a bus heading for Zaanse Schans. Bus route 391 took us directly from rear of Central Station the main museum at Zaanse Schans. We didn’t go into the museum because the windmills were our main attraction and the area that they are in is free to enter. The village itself is a series of relocated windmills and reconstructed canal houses to give you the impression of what Dutch life was like in the 18th and 19th centuries. It was nice to just walk around the canals, look at the windmills and farmlands but it did feel a little like a theme park. 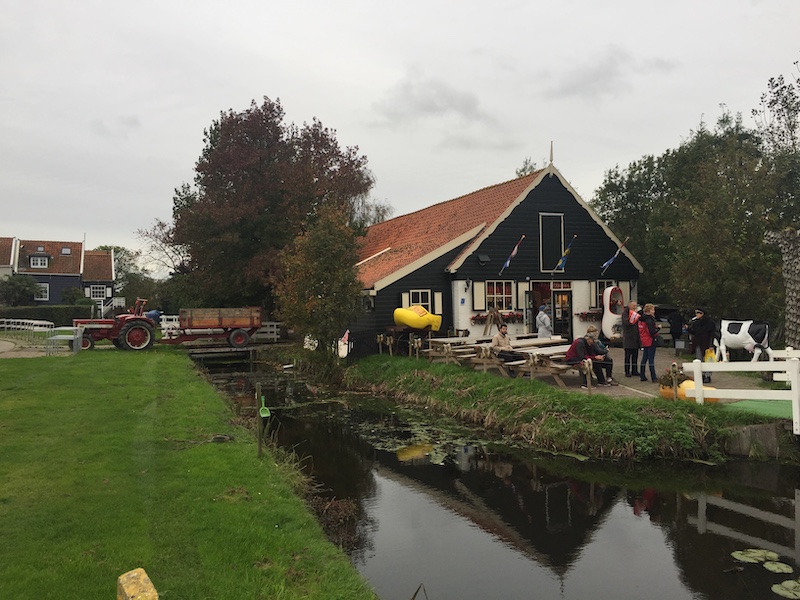 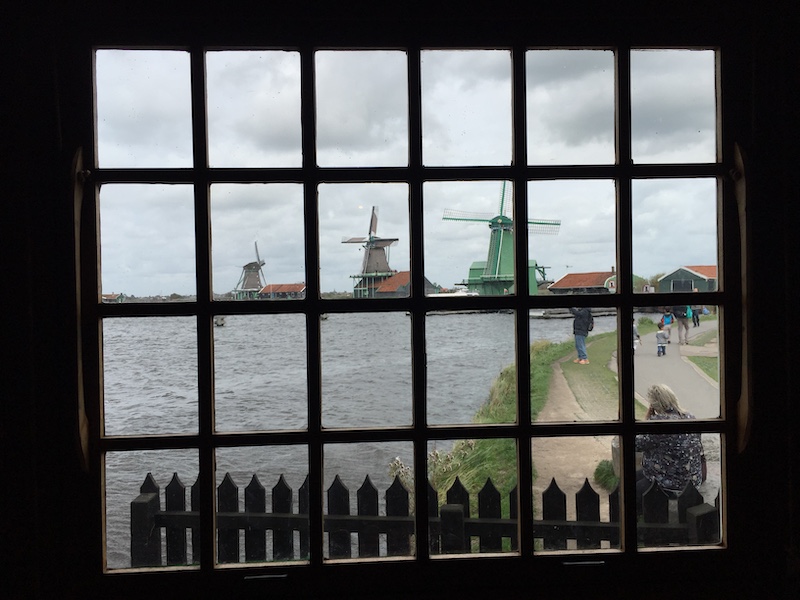 We paid for entry into one of the windmills and climbed the internal ladders to get a view from the windmill deck. As the energy of the wind was caught by the large sails it is transferred through various wooden cogs to eventually grind grain into flour. It’s pretty impressive to see how mother nature has been harnessed and used for centuries in such a beautiful machine. Of course, the views from the outside are equally good if you don’t want to fork over a few Euro’s at each windmill. We choose one further along the canal and presume the inside of the others was similar. We also queued for a very touristy demonstration of the cheese making process before being ushered into the gift shop.

While the area did have a theme park vibe to it, the reconstructions seem consistent with Bradford’s description of Zaandam of 1913 which reads “Most of the houses are only one or two storied, painted either green or red; innumerable windmills”. While the number of wind mills now is less than that of 1913, it does provide a great insight into the Dutch battling water and harnessing the wind. We were glad however that we had come on our own and not with a tour group. The bus loads of visitors appeared to be guided by rather militant guides as they promptly toured the site.

Having explored the site enough we crossed the Zaan river and walked to Zaandijk Zaanse Schans train station. From here we would take two trains and a bus to our next destination of Volendam. While the tour bus would take others direct, this indirect route was originally planned to allow a stop off at Edam and was a lot cheaper than the guided tour. Our train trip to Purmerend was uneventful but we missed a bus so ended up having some hot chips at the bus stop while we waited for the next service. As we took the bus (route 110) through small towns and beside green farmlands it felt like were a long way from Amsterdam. Possibly because it felt like the bus went down every possible street on the way to Volendam. Despite feeling distant, we were never more than 20km from central station. 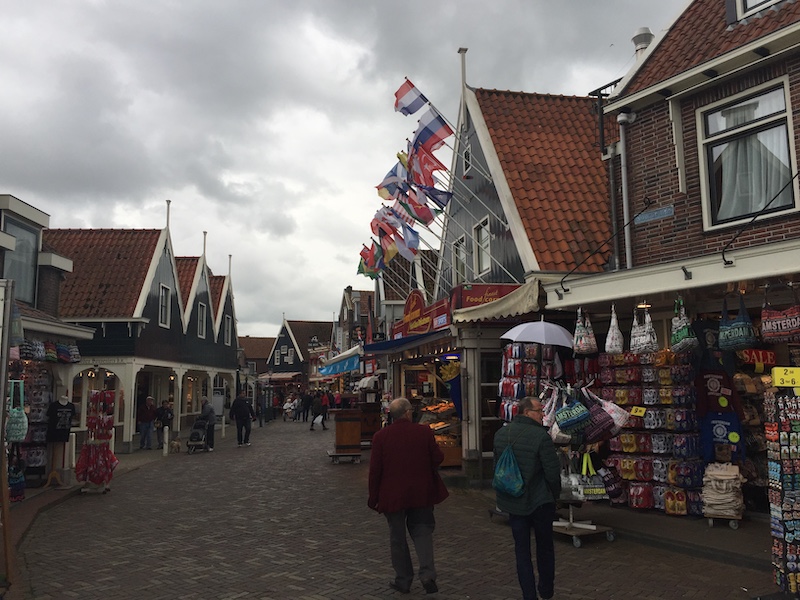 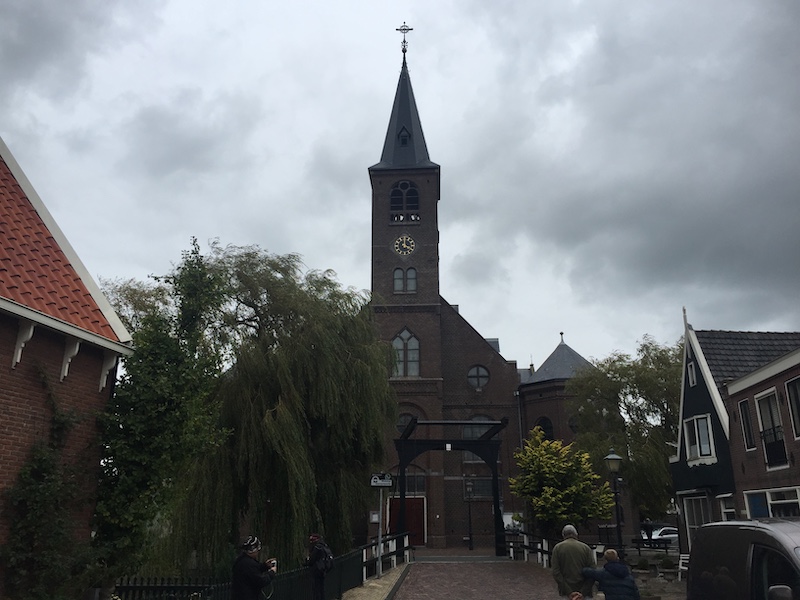 With time getting away from us, we decided to skip Edam and quickly switch busses and continue until Volendam. This village has a seaside town feel about it despite technically not being on the sea, but instead being built on a lakeside. Despite the rather gloomy day, the bright coloured wooden buildings that line the harbour area are really quite pretty. Before exploring the harbour too much, we checked the time and bought tickets for the ferry across to Marken to avoid missing the boat. There are many stores filled with trinkets of crafts, lots of clogs, flags and Dutch food along the harbour. A lot of the staff at the stores dress in traditional Dutch costume, with women wearing the traditional pointed bonnet which you see on pretty much every Dutch souvenir (other than clogs and windmills). It’s a cute little town and well worth a visit.

One standout memory of visiting here was the waffles we had from one of the colourful stores along the foreshore. I must say the waffles I had here (banana and Nutella) remain the best waffles I’ve had anywhere! That’s a big call but that alone is worth the visit. With some extra energy on board thanks to the waffles (or probably the Nutella), we wandered down some of the lanes and had a look at the houses within the town itself. 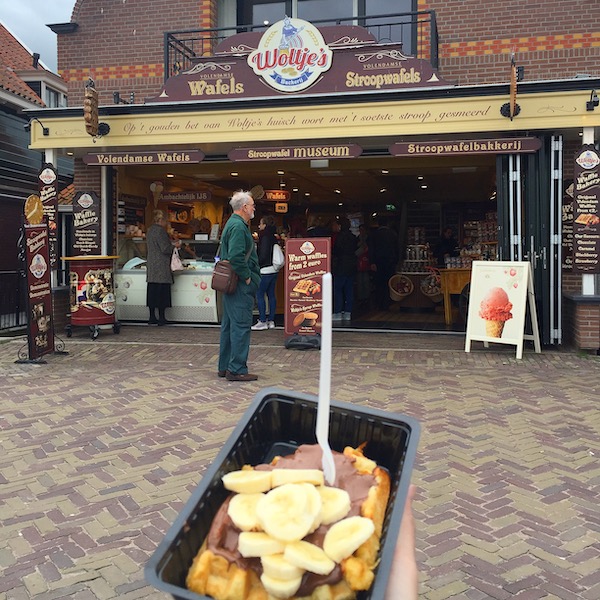 The ferry across the lake doesn’t take very long but many others on the boat take advantage of the bar onboard to warm up as we cross the calm lake. We warmed up and on arrival followed the crowd along the harbour to the nearby clog factory. This is the main attraction of Marken and you don’t need a map to find it as it appears to be where everyone goes. Fortunately the clog factory museum is on the other side of town to the harbour so you pretty much walk through the entire village and get to see more traditional style housing, beautiful green gardens and the occasional animal as you wander through the village.

Within the factory there is a demonstration of clog making and some history about why the clog was made and an opportunity to try on a clog or two. There is a gift shop should you want your own pair to take home. We decided that there weren’t enough muddy fields in Melbourne to justify the purchase. The bus stop for the ride back to Amsterdam is almost directly out the front of the museum and before it got dark we were on a bus heading back to central Amsterdam. 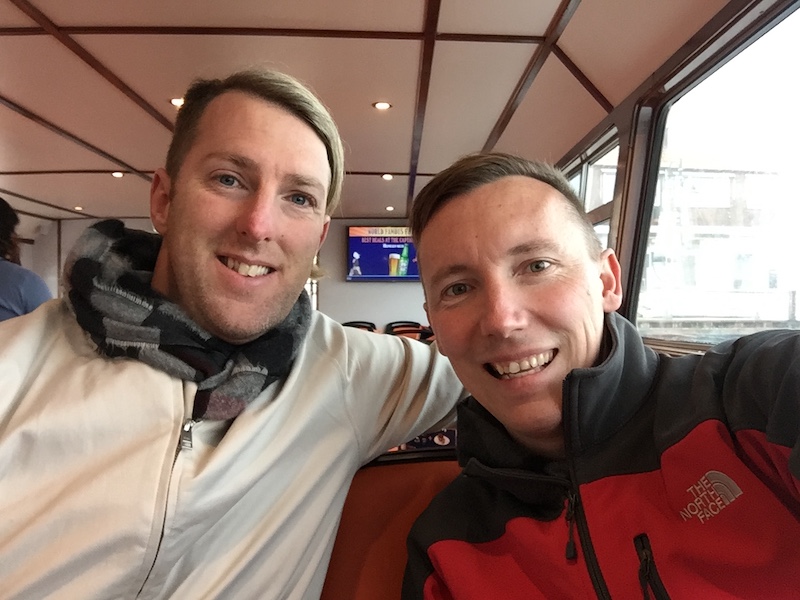 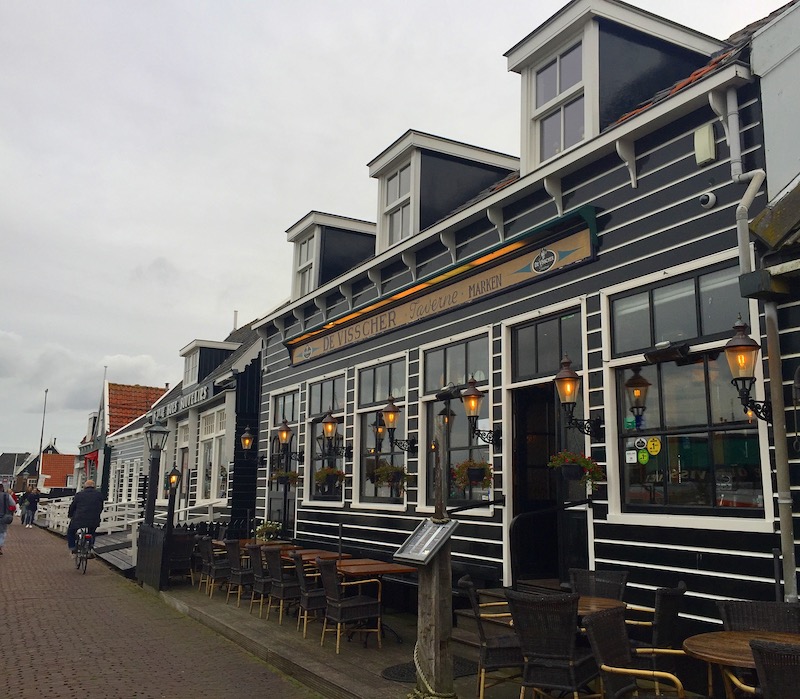 Looking back on the day and comparing it to Bradshaw’s guidebook most of our day wouldn’t have been on a traveller’s radar in 1913. Perhaps it is because the lake that formed most of our afternoon adventures wasn’t a lake until the North Sea was dammed off in 1932 or perhaps the allure of a seaside life filled with waffles didn’t attract the travellers in those days. While our self guided tour might not have been on Bradshaw’s list it is one of the top selling bookable tours out of Amsterdam. Taking it on our own took longer than the 6 hour bus tour, we felt it was nice to have our own schedule and be able to do things at our own pace. It was also a lot cheaper! We probably could have been quicker by transiting back to Amsterdam and then out to Volendam instead of the visually more direct route we took from the windmills to the sea, but our own journey added to the experience. We made it back to the hotel for an evening glass of wine at happy hour before heading off to explore Amsterdam a little more. 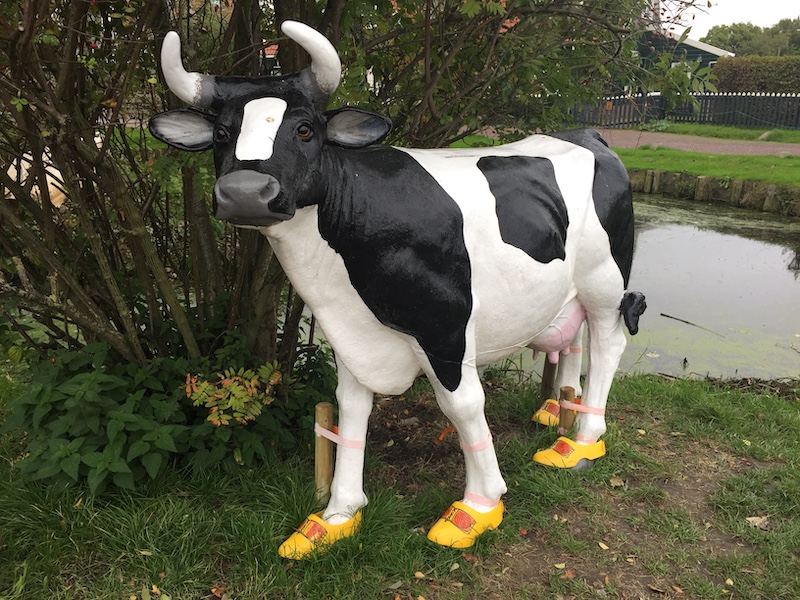