I had the opportunity recently to visit a city in Hubei province, central China were a westerner is a definite novelty and although the city is definitely a culture shock, the experience was in retrospect, amazing. This smaller city was called Qianjiang (even after spending almost a week there, I still can’t pronounce it) and I think that the smaller cities are where you really get to experience the culture of another country as its here were less westernisation seems to have reached (although Nike and KFC seemed to have arrived well before us).The city of Qianjiang is situated about 2 hours drive from the industrial city and capital of Hubei, Wuhan and the Yangtze river and depending on who you ask, has a population of between 15,000 and 1 million (although I think I saw more than 15,000 people so think the 1million estimate is more reliable). 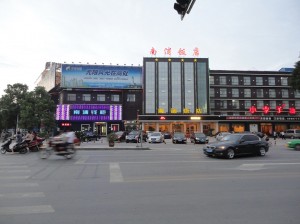 The city itself seems to be spread along a north south road and is surrounded by industrial complexes and farm lands. The main city centre has a restaurant street, a few hotels, lots of mobile phone shops, 2 stadiums and various street side stalls and lots of traffic. There are a few really well developed side roads that don’t seem to go anywhere yet, but I’m guessing they are planning for the future. Our hotel is on the southern side of the city about a 5 minute taxi ride out of town but before I get into that, I’ll tell you about getting here.

Driving in China is not for the faint hearted to say the least. Despite numerous signs on the freeway about wearing a seat belt it seems that we were the first time users of many of the seat belts in the cars and taxis we travelled around in with none of the locals wearing them despite the erratic driving. One taxi driver asked us not to use the seat belts during one trip (at least that’s what we think he was signalling us to do as our Chinese was about as good as his English). Within the town centre I convinced myself that I’d survive a lower speed impact (40-60kph) without a seat belt in order to keep my sanity during the drives to and from the hotel however on the open highways wherever possible I tried to buckle myself in despite the locals reluctance. In reality I’m sure I would have still been pretty badly injured, but as the hospital in town looks abandoned (never had any lights on) I let myself believe my own lies to keep my sanity. 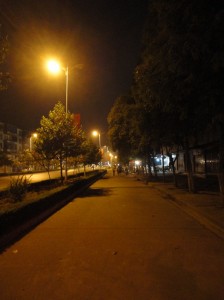 Despite a few near misses travelling at up to 140kph, on the freeways it felt relatively safer as there was less oncoming traffic to hit (I say less, as there was the odd scooter going the wrong way in the emergency lane). On the rural roads it’s a different story where the lane markings are more of a suggestion than a rule and overtaking into oncoming traffic is the preferred method of making progress. It seems inconceivable to stop and thus forward progress is always made – regardless of traffic or road conditions. Once you get used to the erratic driving (if that is possible) the countryside is pretty cool with farming being done like it used to be using hand tools, water buffalo pulling ploughs and lots of people picking the crops and leaving them in piles on the side of the road for collection. Harvesting machines and tractors seem to be almost irrelivant to farming life out here.

On arrival into Qianjiang our driver accidentally took us to the wrong hotel (they must have copied down the wrong address) but it wasn’t too long before we arrived at the Hedy International Hotel – home for the next 5 nights. The hotel is pretty big, spread across 6 floors in 2 buildings connected by the central lobby. On the ground floor there is a karaoke bar and there is also several private dining rooms in the Chinese Restaurants (do you call them Chinese restaurants in China? or is it just a restaurant?) Despite its size, occupancy was very, very low and at times it felt like we were the only guests in this gigantic complex.   We choose this hotel as we were told that it was brand new, they had a massive pool and someone who spoke English. The hotel was very new and despite the rooms looking pretty good, the fine details seemed to be lacking. For example, my first room which seemed about a kilometer walk from the lift took about 40mins for clean hot water to make its way to the bathroom (presumably following the same long hall). When the water did arrive, the drainage problems became apparent with the water quickly filling the shower room (it took about an hour to drain). Unfortunately the pool wasn’t yet finished, so despite the heat there was no where to go for a quick splash to cool down. 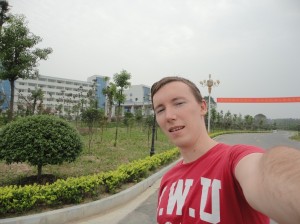 The staff were pretty good and were very keen to help us in any way they could. The only person who spoke  English however was the front desk Manager, Mandy who was extremely helpful during our stay (despite having limited English – but that’s where the Mandarin – English dictionary came into play). She even drove us into town a few times to various restaurants, and to the only ATM in town that accepts Visa/Mastercard as the hotel only accepted Chinese issued cards. Our Mandarin English dictionary was a lifesaver and a must have if you are travelling off the beaten tourist tracks. Other than a few younger waitresses and the manager at our hotel pretty much no-one speaks a word of English which makes pointing and fumbling through the dictionary a very very common and somewhat hilarious experience. 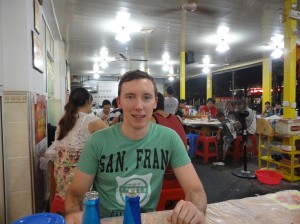 Each night we took a cab in to the centre of the city to grab some dinner and each night it was a game of charades in ordering from the Chinese only menus. I don’t eat seafood/crustaceans etc so on our first night we thought we made that clear when we ordered, however the first dish that came from the kitchen was about 30 small crayfish. When we pointed to it and said “seafood” the staff laughed at us and said “no sea… river”. I think they thought we were nuts thinking that the food would have come from the sea. Anyway we soon learnt that it was best to ask for the foods we wanted as opposed to what we didn’t want. The next night I was taken into the kitchen of an open air restaurant and pointed at things that I recognised for dinner – a much better system 🙂 Generally speaking the food was great – as long as you like a good dose of chilis – as that is the local delicacy. 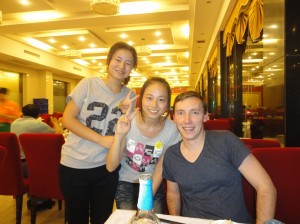 On our last night in town we took the advice from our favourite restaurant in town and took a 5min taxi to the other side of town to see the “Very Beautiful Place”. If you ever get to Qianjiang this is probably the one and only must do attraction in town. This area is a huge park on both sides of the main road with a few small lakes, gardens, statues and a fountain that dances to music. It really lives up to its name as it is very beautiful and the locals seem to love it with plenty of badminton going on and lots of dancing in the street. On one side of the park there was a large group learning a dance with plenty of onlookers (myself included). The amount of activity in the streets at night is amazing as it seems everyone comes out to eat, drink, dance or just socialise in the streets – there doesn’t seem to be a “i need to get home in time to watch my favourite TV show” mentality here which is really pleasing to see. 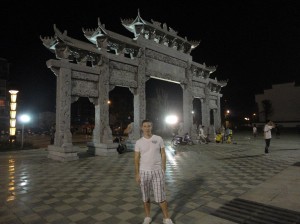 So if you happen to be in and around central Hubei and for some reason find yourself in Qianjiang City, I’d say get into town and get yourself a nice serving of chillis for dinner before checking out the Very Beautiful Place at night to see the dancing waterfall and maybe even do a bit of dancing yourself. If the chillis get too much, there is a KFC in town and it tastes exactly the same as it does back home (the Colonel’s secret recipie is alive and well) although thier power did keep going on and off, so dont rely on it being available. Maybe by then the Hedy’s occupancy will be up, pool full  and the hot water might flow a little quicker to your room – it probably is the newest and better hotel in town, so give it a go too – but remember, cash only if you’re not a local. In my week I managed to learn how to use chopsticks, learn how to say hello, ask for cold beer and the bill in Chinese, make pen pals with some local waitresses and be something different for the local kids to stare at – all in all a very good first experience in China.