Terminal: Although I’ve been through this airport more times, and written more than one Virgin Australia Review, I’ve never done any real reviews of the Virgin Australia terminal or its lounge before. While waiting for my flight I reviewed the lounge which you can read the full review of here. If you don’t have lounge access, I wouldn’t want to spend too much time here as other than a few places to eat or drink theres not a huge amount to do here. I am impressed with the way Virgin has branded the concourse and how it has gate podiums which are staffed by ground crew which I think is a nice touch and provides a bit more service if you need it. The check in and baggage claim areas have been recently renovated and I think it’s made a huge difference (especially at check in) to the professional feel the airline has been trying (and in my view succeeding) to build over the last year or so. 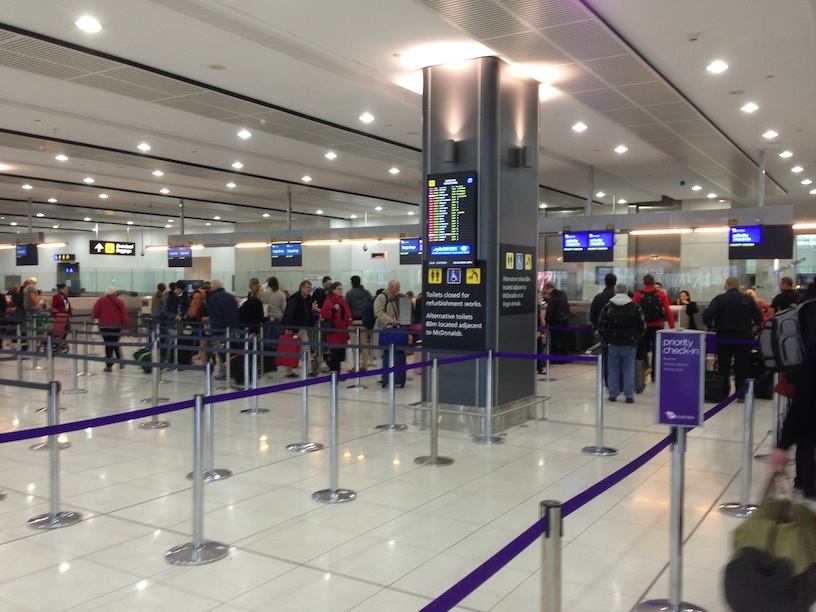 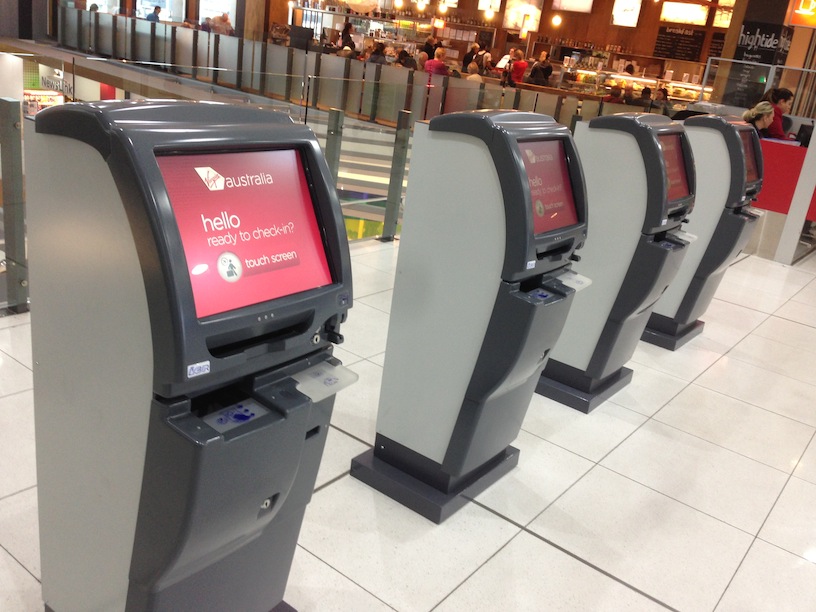 Virgin operates out of two concourses within Terminal 3, both with their own security points. So if you’re drafting from gates 1-10 use the security checkpoint that’s closest to the check in area (pretty much straight ahead after a slight deviation to the right) however if you’re in gates 11-22 hang a left once you’ve gone done the escalators from check in, walk past the lounge and along the walkway to the concourse that’s also used by Rex (Regional Express). 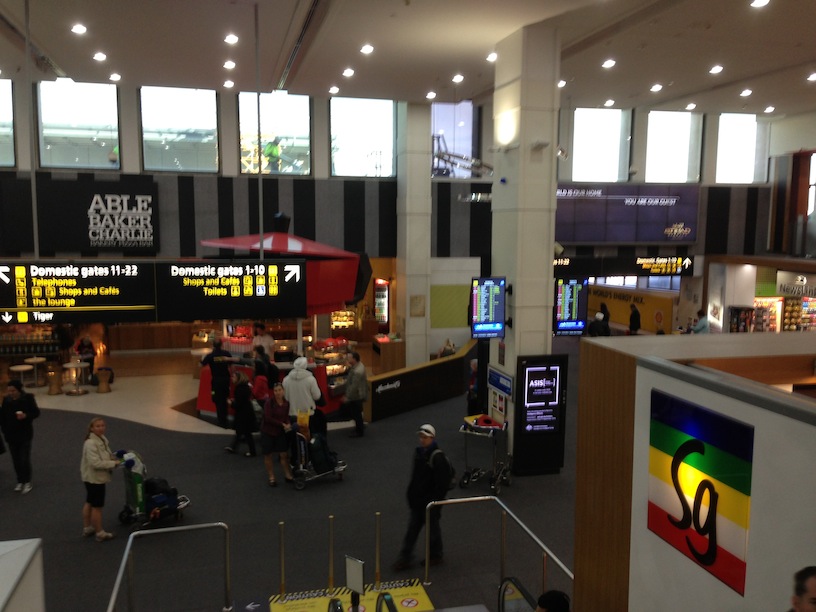 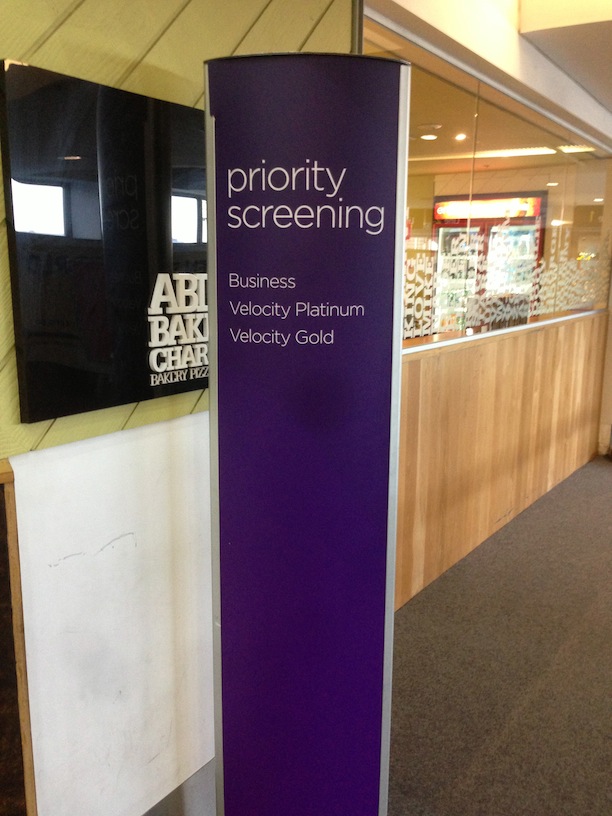 If you do get here early (without lounge access) or you clear security only to find your flight delayed. Walk to the end of the concourse near gate 10 where you’ll find the closest view of the north south runway. There’s only a few seats and if the gate is in use it might be crowded but it I’d it’s not being used its a relatively quiet place you can do some plane spotting in peace. 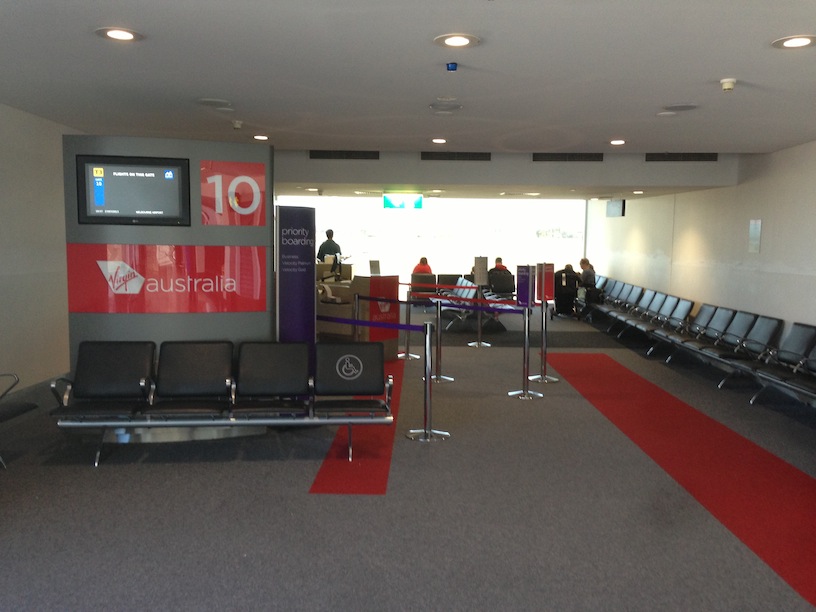 Departure: Gate 5. Although boarding was scheduled to commence at 11:00 the inbound aircraft from Launceston arrived at 11:05, meaning a slight delay to the boarding time. Fortunately priority boarding works really well with Virgin so once boarding commenced I was one of the first to board. However after barely getting one foot on the plane I was quickly turned back and de boarded after the crew reported an engineering problem that 5 engineers were working on rectifying. Apparently 5 engineers and passengers was too much for this little 737 this morning. After a few minutes awkwardly waiting between the boarding desk and the door boarding recommended and I was again the first non wheelchair guest to board. 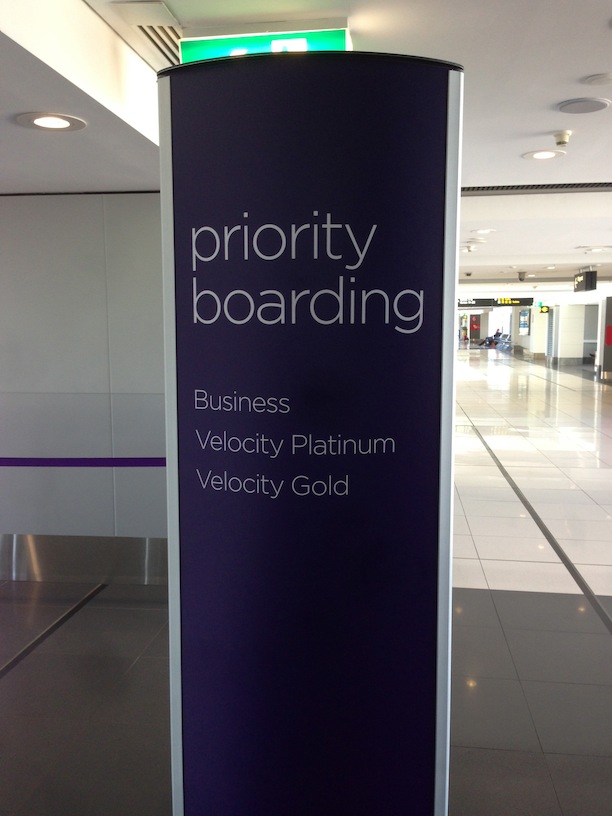 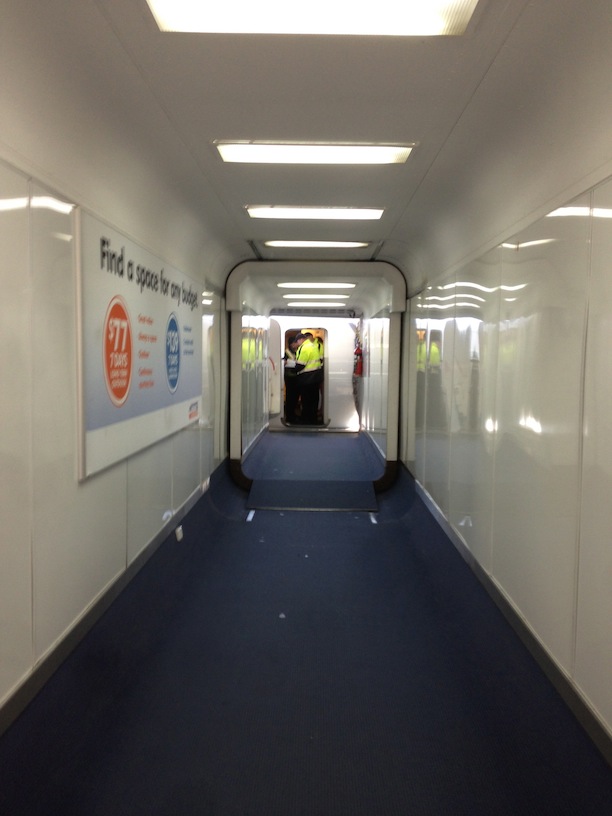 Without a full load boarding was complete relatively quickly and the doors were closed ready for push back. The mandatory exit row safety briefing was delivered by the crew with all the personality and excitement you’d expect from a rock before we pushed back and taxied to the southern end of the field for a short take off roll on runway 34. Our climb included a few small bumps as we passed few a few very thin layers of light cloud while climbing out of a relatively quiet Melbourne airport.

Seat:  13F. As previously mentioned I scored an exit row during the booking process however as I refused to pay extra for a seat, it’s the less desirable exit row seat as row 13 does not recline. Despite the lack of recline the leg room is the same as the row behind and thus there is plenty of room for my standard sized legs. The tray table doesn’t actually extend far enough into the seat, a sign of good legroom (although slightly annoying if you’re trying to use your iPad / eat while flying). 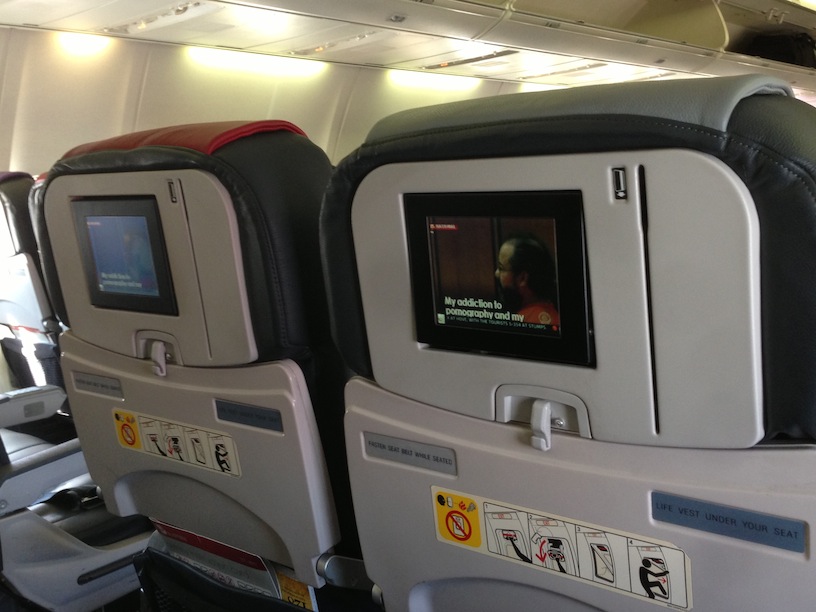 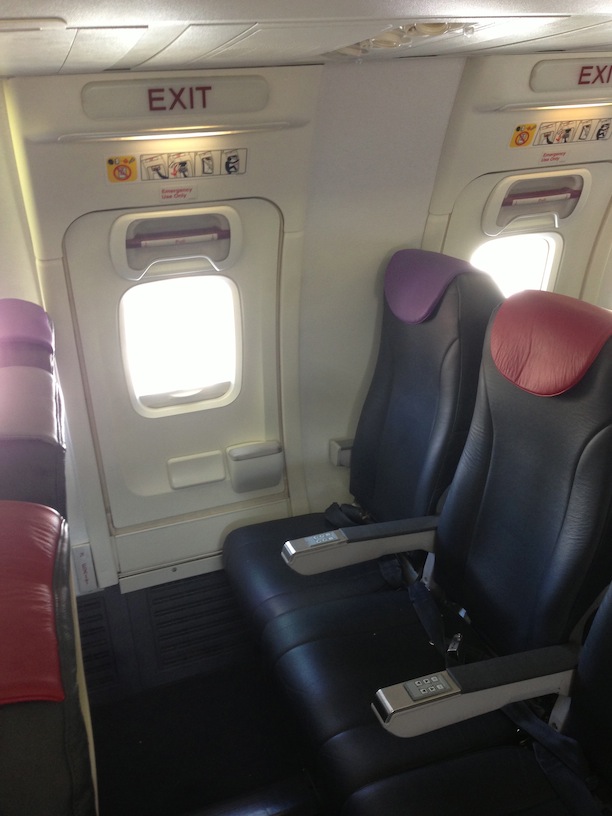 The seat itself is covered in the standard grey leather with alternating grey, red and purple head covers like most of the new Virgin Australia fleet. Other than the padding of the head cover there isn’t any headrest at all which I’ve never noticed before. Being a window seat on the exit row your right armrest is in two parts but it does the job. 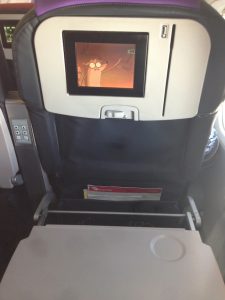 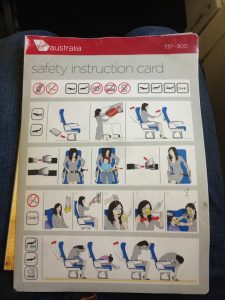 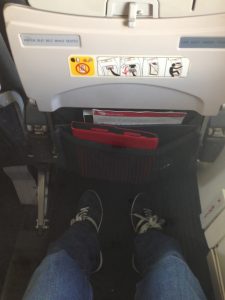 Aircraft:  Boeing 737-800 (VH-VOK – Johanna Beach). Despite its fresh paint job on the outside this particular 737 has been in the Virgin fleet for a while and doesn’t sport the BSI interior however it’s been kept looking pretty fresh with the new seat coverings and the now standard Business class cabin separated from economy by a purple perspex divider. The overhead buns are smaller than that of the BSI buddies but with not a full load (and boarding first) that didn’t really seem noticeable. 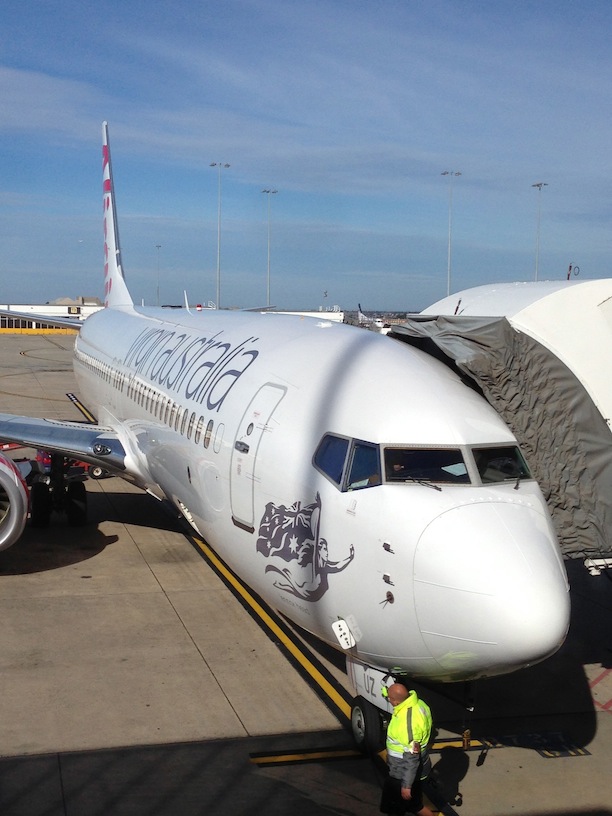 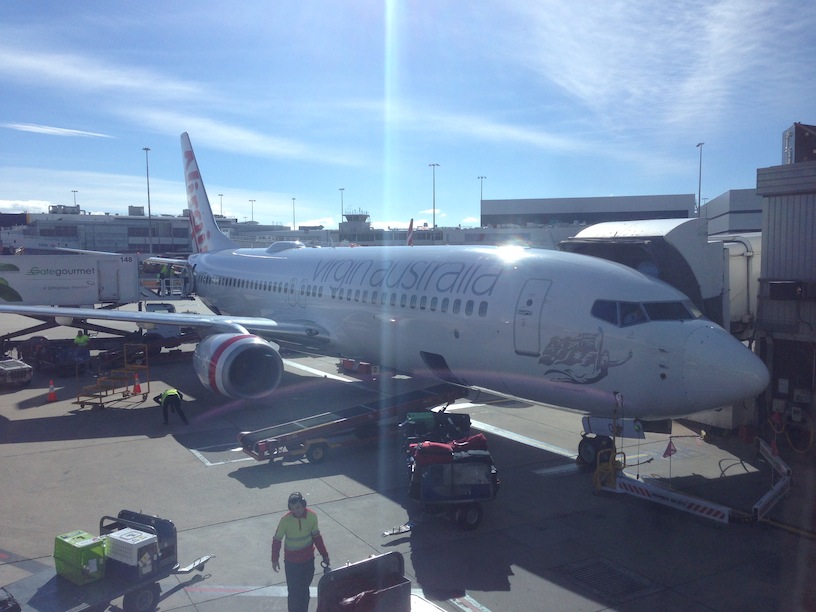 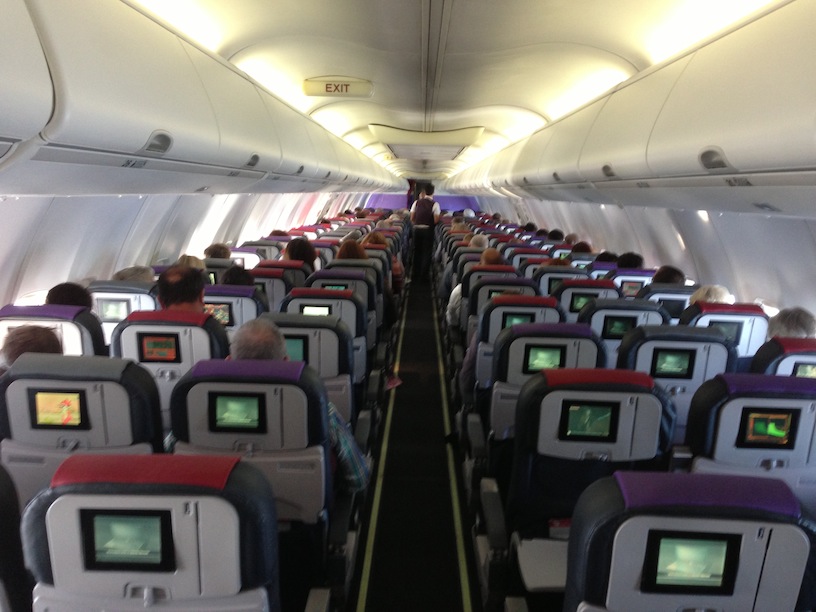 IFE: Surprisingly this 737 hasn’t had its seat back IFE taken out (yet) as Virgin moves to its wireless tablet based IFE option (a really bad move in my view but anyway). The crew handed out free headsets before take off (for some reason my apple ones didn’t work but the cheap Virgin ones did) and the system provided about a dozen or so Foxtel channels available for fre viewing gate to gate. Included are all the basic channels like Fox8 and TV1 as well as a heap of sport channels (Boring) and quite a few kids channels (Yay). There’s also a moving map showing basic position, altitude and speed. I found it good to just have on in the background and its disappointing that Virgin are removing these in favour of tablets (boo). 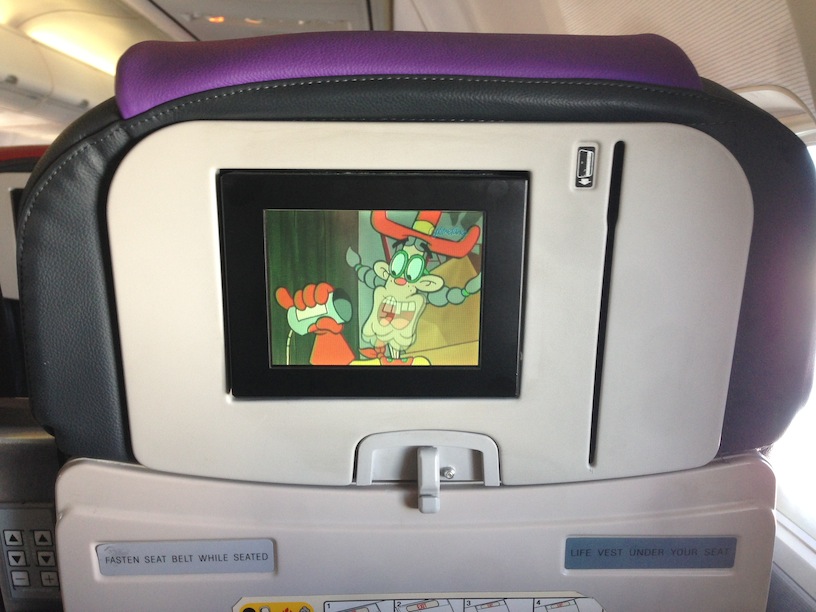 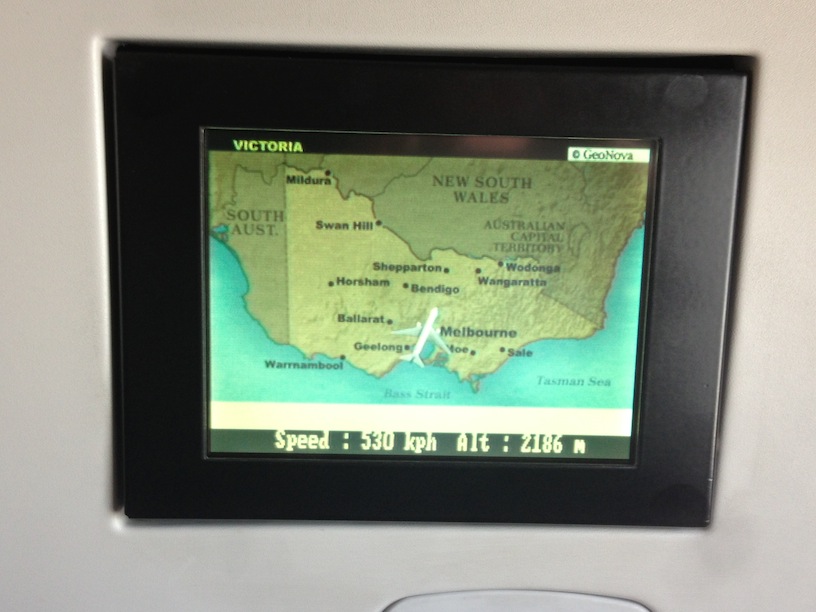 Meal: Meal service on Virgin is dependant on many factors backups where you are going, when you are flying, how long your flight is or what ticket you bought. I bought a cheap flight, that wasn’t very long, and not going anywhere special and thus the complimentary service consisted of water, tea or coffee. There is a buy on board menu available which I normally frown on however for the sake of the review (and a slight rumble in my stomach) I decided to try it out and get myself a light lunch.

The options on the buy on board menu are limited, however I went for the Roast Chicken sandwich accompanied by a can of sprite which set me back $14. Slightly higher than what you’d pay on the ground but also not unreasonable. The quality was pretty good and the sandwich was filing enough to fill me for the 1:25min flight. Sure, I probably didn’t need it but for some reason I find it odd not to eat something on a flight (which is why whenever I travel I need to make sure I pack my gym gear). 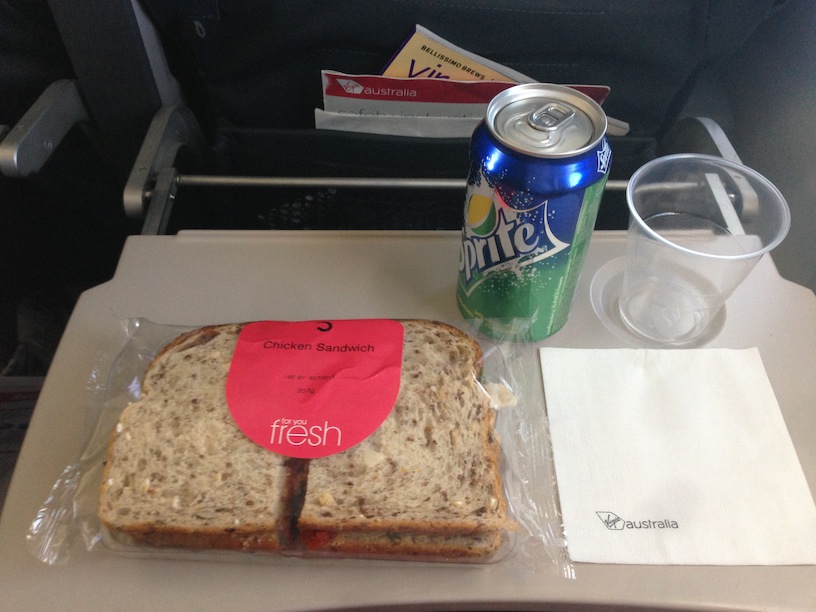 Arrival: With our slightly delayed departure we were advised that arrival would be about 10mins behind schedule after flying over Albury and Wagga Wagga before heading towards the northern NSW coast and arriving into Coffs Harbour. There are a few steep turns before finally lining up to runway 21, touching down and applying a fair bit of reverse thrust and brakes, stoping at the opposite end of the runway before backtracking most of the way back to the terminal. There’s no fancy aero bridges here, just good old fashioned stairs and a nice warm 20something degree day to greet me. 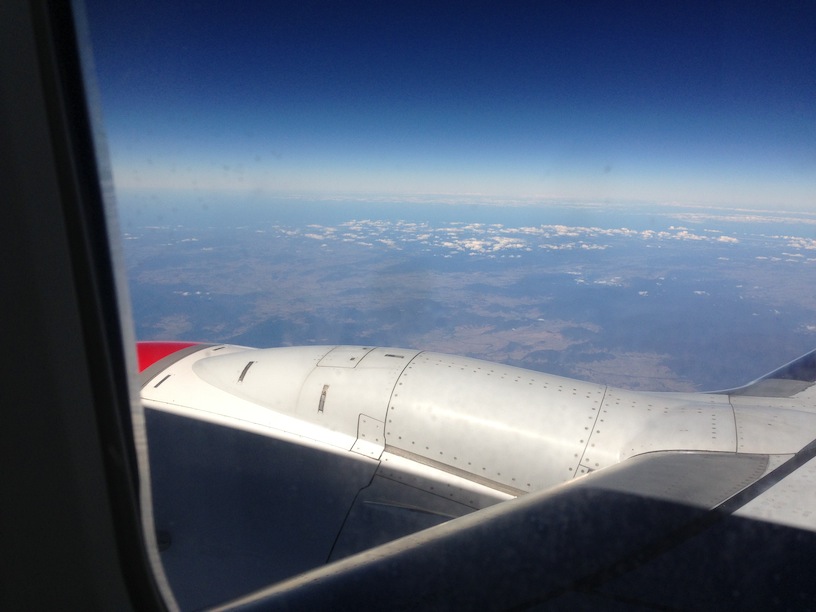 Crew:  The cabin manager was friendly as he explained what was going on during the boarding / de boarding process however the crew member who did the safety demo for the exit rows was colder than a Canberra winter morning and lacked any of the Virgin Australia ‘romance’ despite my friendliest greeting and excited smile from ear to ear. The rest of the crew were ok but nothing exciting or worth writing about. Overall I’d say the crew weren’t really reflective of the new corporate style Virgin Australia brand which was slightly disappointing.

Overall: Flying somewhere new is always exciting and today’s flight was taken for the purpose of flying, blogging and getting some of my travel mojo back again. Thus in that front it was going to be a success regardless. I enjoyed the IFE (Virgin, take note) and the extra legroom was nice. With only a twice weekly direct service to Coffs Harbour from Melbourne I was a little confused as to the market for the service; leisure, corporate, visiting family and friends or just flight enthusiasts like me which I think could have been an issue with the crew – who are we serving here and why. Overall – good job, fun review and I look forward to my next random flight of the day. 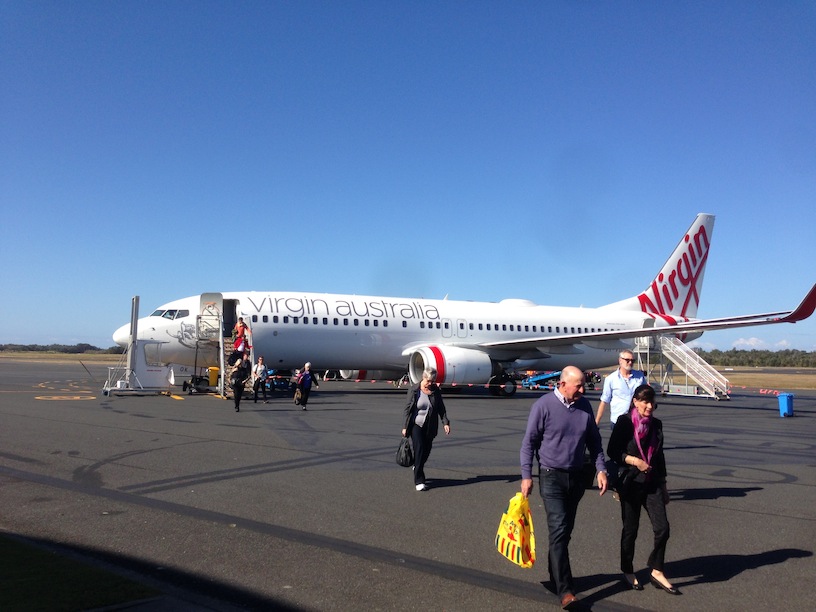