Terminal: I was able to select row 4 during online check in however on arrival at the lounge this morning Chris at the service desk was able to move me into row 3 and print out my boarding passes; great friendly service and a nice welcome to the lounge. Unfortunately that’s were the good Virgin Australia service ended during this trip to the lounge. Renovations mean the lounge has reduced capacity during this visiting however eventually that will mean a bigger lounge so I’m ok with the slight inconvenience that presents. Taking a seat near the windows I stood up to take a photo of the Tarmac action only to be rudely told off my lounge staff for taking photos of the Tarmac. Which apparently is illegal. After being embarrassed by this rude behaviour, I tweeted @virginaustralia for clarification of this ‘law’.

Virgin Australia’s social media team were great In responding quickly to my messages, however it was a really disappointing and unnecessary action to a customer which did tarnish the start of my day of review flights. Since this post was written, the social media team and Virgin Australia have been extremely positive in their responses to the issue around the photos in the lounge – so much so that this one incident is long forgotten.

Departure: Awaiting at gate 13 in the secondary Virgin Australia concourse at Melbourne Airport was my 737-800 already well into boarding. The premium boarding lane was free and was attended to as soon as I entered the lane. I’ve always been really impressed with premium boarding on Virgin – it’s always a hassle free experience. Once on board the doors were soon closed before we waited for the Tarmac behind us to clear as several Virgin, Tiger and interestingly a Qantas 737 positioned around us. About 15 minutes after the scheduled departure time we pushed back, ready for the 1hr 4 minute flight westward towards Adelaide. 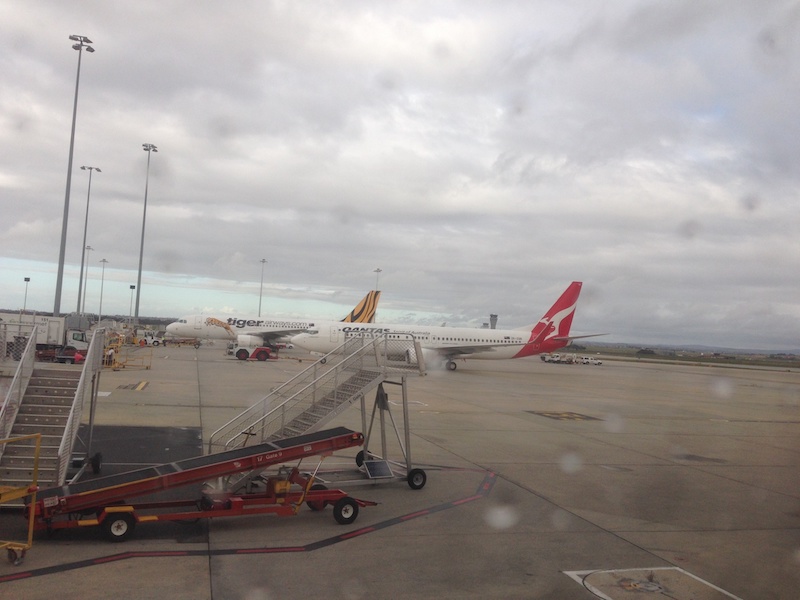 A tip for fellow #avgeeks who like a good view of the terminals, select an F window seat. Most departures use the western runway, and from the virgin terminals aircraft circle the international terminal to make their way to that runway.

Seat: 3F. Generally this row is only available to Platinums before arrival at the airport and is the holy grail in domestic economy travel on Virgin’s 737’s. The first row of economy comes with a small bulkhead in front, enough legroom to fit even the tallest traveller comfortably (and plenty for this average height blogger). Meal trays are in the armrests, however generally the middle seat is empty so definitely doesn’t impact the seat width considerably. The window seats have 3 windows in this row so there’s plenty of light and opportunities to take some mid flight photos. 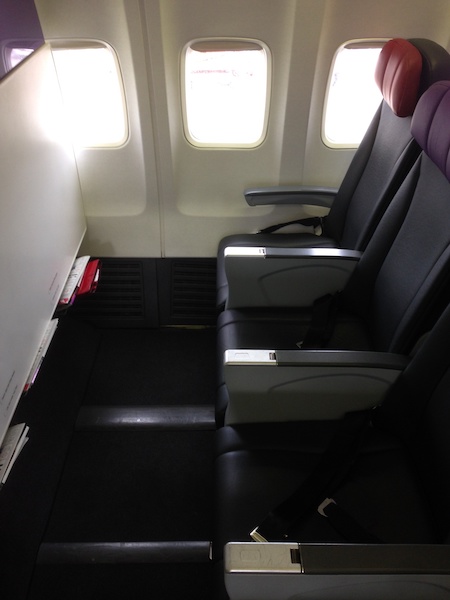 Each seat is dressed in the standard charcoal grey leather with alternating red, purple, grey head rests. Recline is also provided although on the short flight this morning I’m awake enough to not need it. 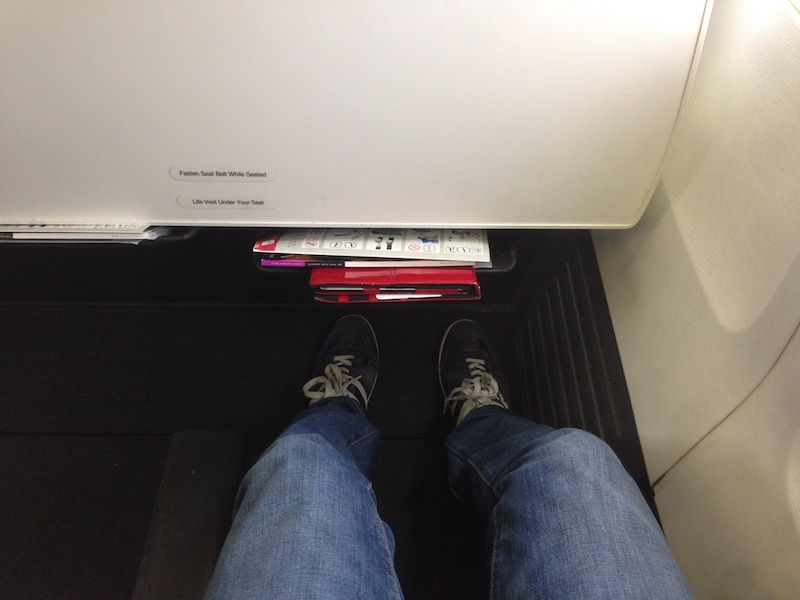 Aircraft:  Boeing 737-800 (VH-???) This aircraft still in its red Virgin Blue livery has been fitted out with the standard interior however doesn’t feature the BSI interior so the overhead bins are a tad smaller than on the newer aircraft in the fleet. It hosts 3 bathrooms, 1 for business class passengers up front and 2 for economy in the back. Despite being one of the older birds in the fleet it’s well maintained and clean throughout.

IFE: On this older aircraft there are two IFE options available. The first being the old LivetoAir seat back TV screens with Foxtel channels and the second being the new wireless streaming. Business class and row 3 don’t have the LivetoAir equipment so didn’t try those again. Instead tired out the wireless streaming to my iPad and iPhone. This workers really well with no buffering, however make sure you download and connect before boarding as you cannot download the app required on board. 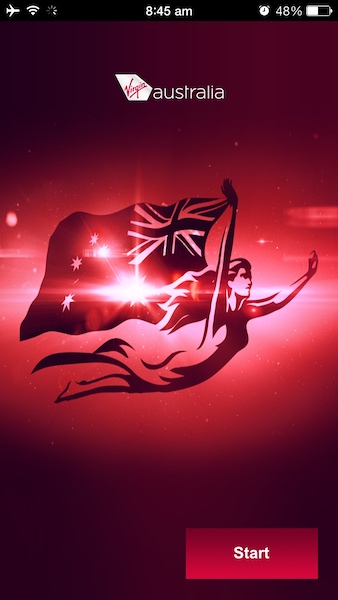 The IFE had a really good selection of TV, movies and music which would occupy most people for the short haul flights around Australia/NZ. The only issue may be battery life, as there are no charging points on board. I had to quickly stop into the Adelaide lounge to charge my phone for after the flight before a day of exploring Adelaide. Overall I was impressed with the streaming content selection however still prefer seat back IFE over tablet based. A good feature is that the IFE is muted/paused during crew announcements which was a flaw in the original tablets that were available for rent.

Meal: Free tea coffee and water are provided however I lashed out and bought a can of sprite and cookie pack (cranberry white chocolate and triple chocolate) for $7 which wasn’t bad value. If you buy a flexi fare you do get a complimentary meal/snack. 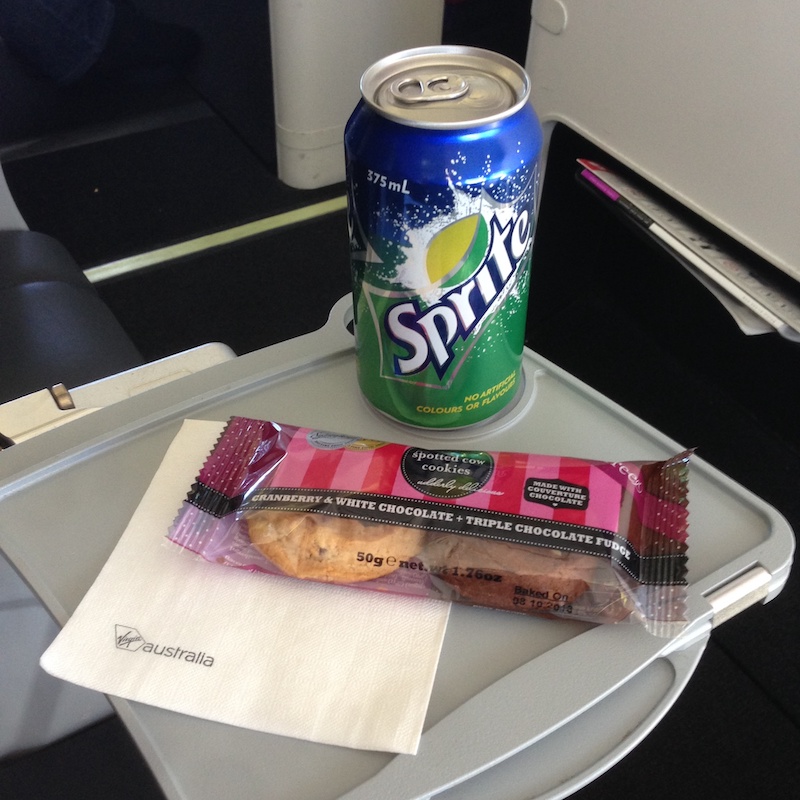 Arrival: The captain advised that they were able to make up some time, and would be arriving into Adelaide only 15minutes behind schedule where the weather was fine and 14 degrees. Crossing the south Australian border clocks get wound back 30minutes.  A few bumps on the approach as all the tree lined, old fashioned looking streets of Adelaide zipped by below before touching down, applying a fear chunk of reverse thrust and then softly breaking before taxing to the terminal. 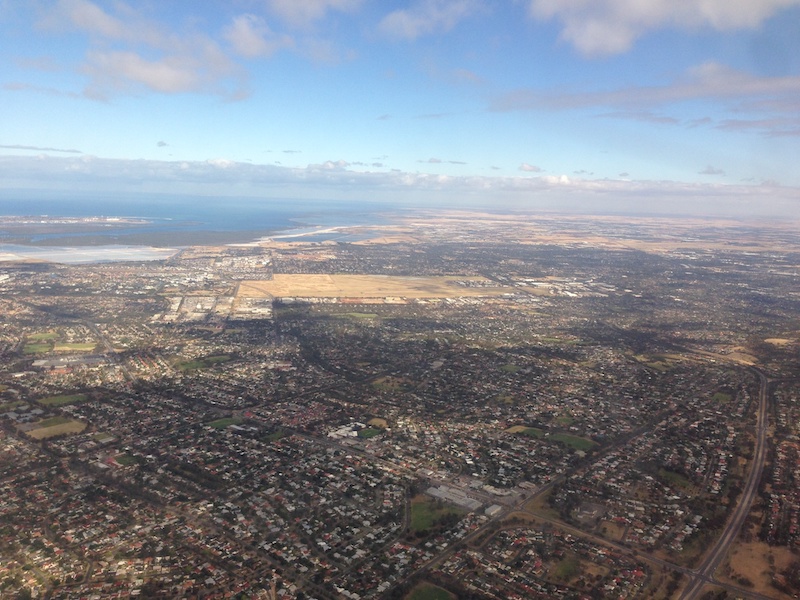 Adelaide operates a mixed international / domestic terminal with central gates being converted to international mode on my arrival as Singapore and Malaysian airliners arrived for flights direct to Asia. 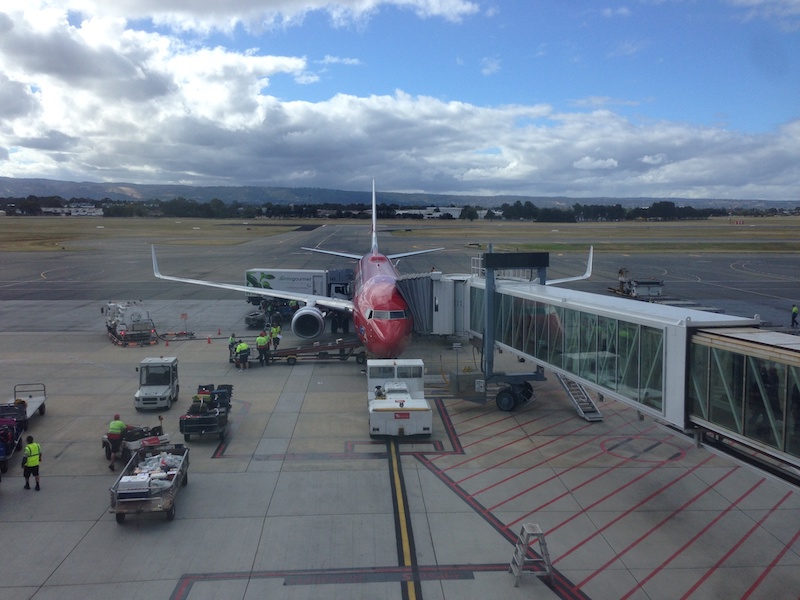 Overall: Despite a very ordinary experience in the lounge the flight to Adelaide was pleasant today. I was surprised with how much I liked the IFE available and having never flown to Adelaide before it was a nice exciting experience