Terminal: Arriving at Canberra slightly before dawn I took a rather unusual route for me and walked straight past the Qantas lounges, instead heading into the old terminal and the Virgin Australia lounge. Although I’m usually a loyal Qantas flyer, after reviewing Canberra to Melbourne to death I thought it was time enough to give Virgin a fresh chance to win me over with their relatively new product offering, so this weekend was all about testing out my loyalty to the flying Kangaroo and trying something different. Fortunately I have been a visitor to the Virgin lounge many times thanks to anytime access and thus you can read the lounge specific review here, however this morning the lounge was particularly quiet, meaning that it was a very personal service once again.

Although the Canberra Airport redevelopment is making relatively speedy progress if you are unlucky enough not to have lounge access the current Virgin Australia terminal in Canberra is rather ordinary and there isn’t much room to move around the two aerobridge equipped gates closest to the lounge. Once the western concourse of the new terminal is complete this will no longer be an issue, which Canberra Airport expects to conclude by the end of 2012. 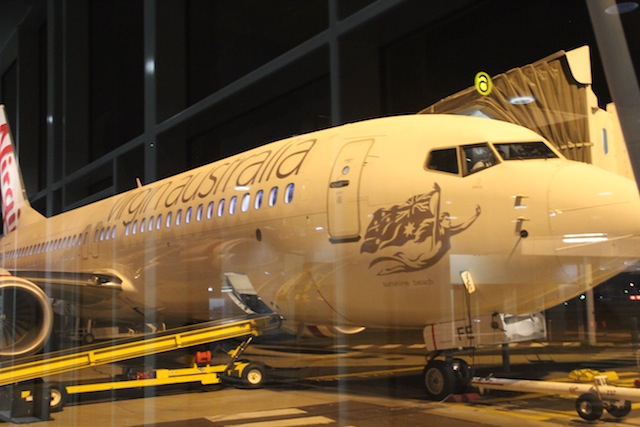 Departure: Despite space being very limited around the gate, a solo gate agent, and a decent number of passengers queuing for boarding at this ungodly departure hour Virgin have successfully managed to implement and deliver priority boarding at Canberra – and it works without making you feel like a queue jumper. Thus I had time to leave the lounge when boarding was called, wander downstairs to take a few quick photos of the plane and then still board before the masses.

I was glad to be seated towards the front of the aircraft today, as the cold walk across the tarmac to the rear stairs wouldn’t have been a nice way to start today’s flight. Once we were all on board and the doors closed up we had a slight delay while we were de-iced, something I’ve never experienced before (although other than the announcement from the flight deck I didn’t really notice anything). Looking out the window at the company E190 in the old Virgin Blue livery at the gate next to me, the notion of de-icing was obvious, as the normally all red bird’s fuselage was dusted with white frost coating.

Watching the national capital sleeping quietly below as we climbed out towards the north with the sun gradually begging to rise I regretted not turning my camera to video during take off today. In fact if I had enough battery and maybe some way of having my camera attach itself to the window so I didn’t have to hold it I would have filmed the entire flight as we passed over the snow capped great dividing range, glowing in the morning sunshine with resort areas clearly visible by their bright orange lights. Needless to say it was a very pretty way to start a Saturday morning. 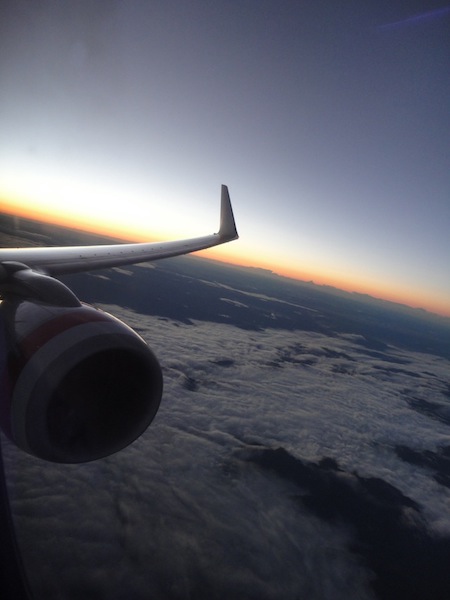 Seat: 3A. Row 3 is the first of 28 rows of economy on the newly configured 737-800’s that are completed with a 2-row business class cabin up front. A partition similar to that seen on Virgin America, half solid and half purple Perspex wall is a nice way to divide the two cabins. If you are flying in economy, which lets face it is 95% of passengers on board, Row 3 is definitely the row you want to be aiming for although without a shiny gold or platinum Velocity card in your wallet it might be hard to get into. 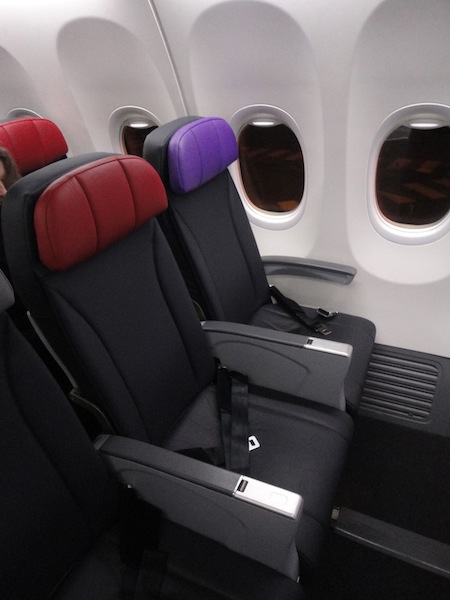 Each seat in economy is a pretty comfortable unit, wrapped in dark grey leather and topped with alternating red and purple headrests adding some much needed colour into what I’m used to seeing on the competition.  Row 3 has the advantage of an amazing about of legroom – seriously more than the 38 inches provided in business class! I was able to get up mid flight and use the bathroom without my neighbour having to even think about moving his legs let alone standing up. Reaching the seat pocket with a firmly fastened seat belt was a little challenging for my short arms, but when you are in economy these are the problems you don’t mind having. 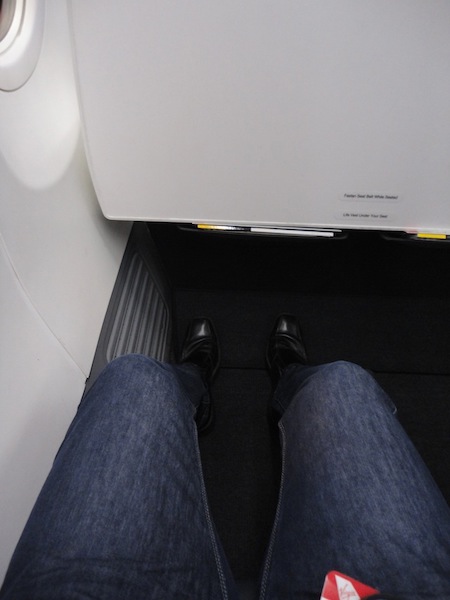 Thanks to the staff in the lounge, the middle seat was also blocked out on my flight, making the 3-3 seating configuration effectively 2 by 2 with an empty middle seat on each side of the aisle. This configuration makes this row extremely comfortable and spacious and definitely something to aim for when booking (in fact its probably more comfortable than the Business class in the non refurbished E190’s). 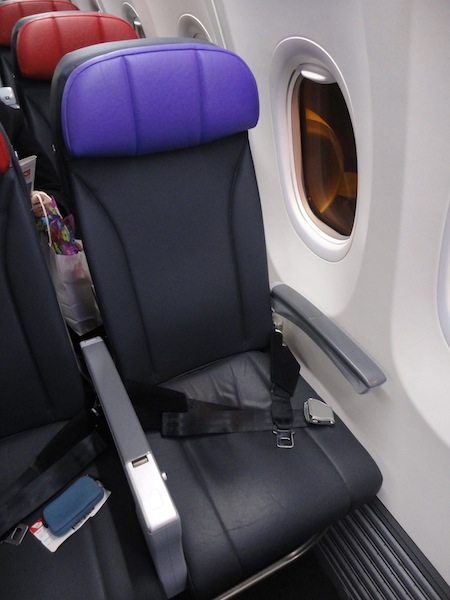 Aircraft: Boeing 737-800 (VH-YFE). This aircraft sports the new Virgin Australia branding complete with fresh new livery, Boeing Sky Interior (BSI) and a full business class cabin. You know when you are an aviation nerd / travel buff when you get excited when the letters B S and I come together, but once you’ve experienced the feeling of more space, increased overhead storage and clean fresh lines of a BSI interior its hard to go back to the classic or “next gen” interiors. The mood lighting is really used to the enhance the Virgin Australia colour scheme during the flight, with blues and purples used, complementing the interior design and corporate colour scheme to a tee. Unlike Qantas were it seems very much hit and miss for me scoring one of the few BSI planes around, both my 737-800 flights this weekend on Virgin were dressed in the new interiors, a 100% success rate in my book. 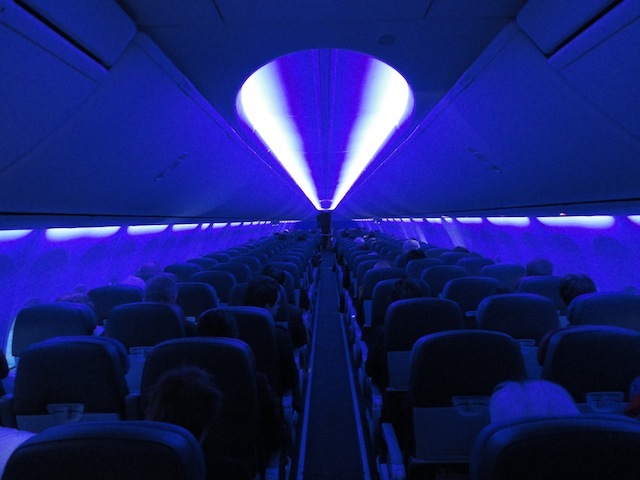 As a side note, I normally take a photo or note down the rego of the plane before or after a flight however on this flight I didn’t, only getting a photo of the “FE” on the nose wheel doors. So turning to Google I searched to find that a few Virgin aircraft end in FE, one being VH-XFE, an Airbus A330 and this 737, VH-YFE. The irony of searching VH-YFE is that the fourth Google hit is an ATSB investigation report (All good tho – no bingle for this bird!)

IFE: One down side to the new Virgin interior is that seatback video is gone with Virgin moving towards tablet based inflight entertainment. I’m personally not a fan of this shift for airlines and much prefer seatback video to a tablet that I have to balance on the tray table or attach to the seat in front. Seat back video also has the advantage that it can be used gate to gate, whereas the tablets can only be used after the seatbelt light is off, and not during descent. Thus given this limitation its not surprising that no such devices were offered for hire on this short hop down to Melbourne. On longer flights you can hire a portable device from the crew and the last 20pages of the inflight magazine outline all the movie and TV options available on the various players available.

Meal: The Capital Connect brand services flights between Canberra and Sydney and Canberra Melbourne and vice versa. The key difference is that on these routes you get provided a snack and drink in economy on all flights as part of the saver ticket. Given the short flight, it would be hard to offer a “food for purchase” service anyway, so the quick free snack and drink is probably easier than stocking a range of options for sale, and also helps assist get the public service dollar on the capital flights. This mornings snack was a “Moosli” cookie and a juice, water, tea or coffee. I’ve had the Moosli cookie before on an ATR flight (review here) and find it really filling. The juice was tropical. 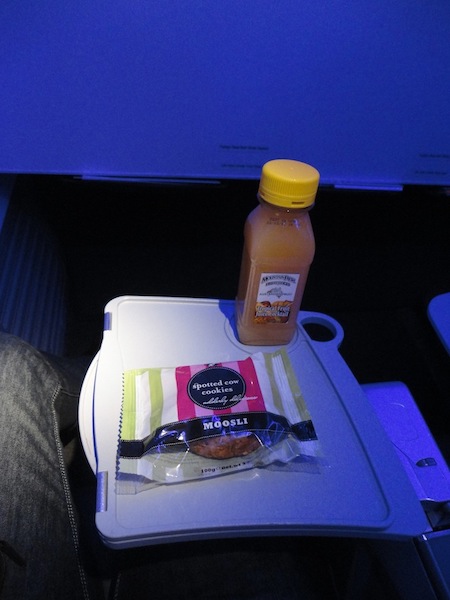 Arrival: After descending smoothly through a thin layer of cloud we had a nice clear (albeit distant) view of the city skyline on approach to land towards the west, which provides a great view of the Qantas and international terminals. A rather long (6min) video of the approach and landing is available below and on my YouTube channel. Arriving at the gate a few minutes early we disembarked using both the front and rear doors into Virgin’s Melbourne terminal. Although I didn’t check baggage, the few baggage carousels looked like they would get busy during peak times.

Crew: All hard product differences aside, the attitude and vibe of the crew is the most significant difference to my usual Qantas experiences and much different to the Virgin Blue I flew many years ago. The crew were fresh (and not just in age), vibrant, friendly and slowly becoming more corporately minded. Gone are the “boys and girls” style announcements, which have been replaced with fresh yet professional announcements. There is room to improve to finish off that switch from a leisure to fully corporate airline, but the airline is doing well to manage the needs of both ends of the market. The crew were willing to assist, happy to chat with those who wanted to chat and overall bright and enthusiastic. 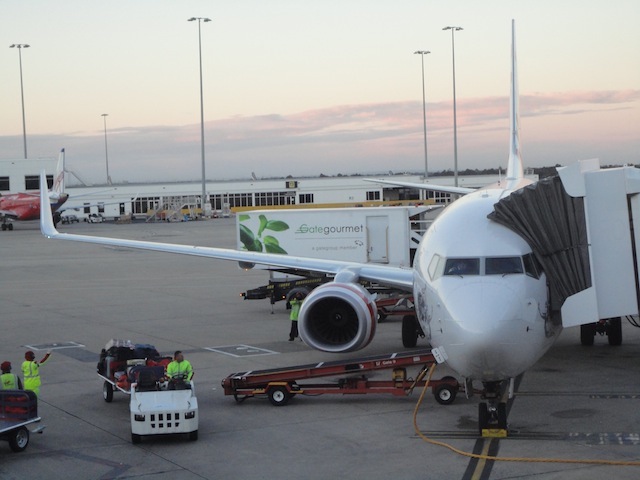 Overall: I think if I had to pick one word to use to describe the crew and the overall new Virgin Australia image is “Fresh”. I enjoyed the flight, the service and the hard product. The space row 3 provided, combined with the blocked out centre seat was a real winner in this reviewers book. My last review of the Virgin product was on the ATR, on which I concluded that I would probably move some of my business over to Virgin, but not all as I wanted to maintain my status with Oneworld. After now experiencing the mainline product I find myself questioning some of my Qantas loyalty, and will now seriously consider Virgin’s product more often, especially as it is currently priced very competitively on the expensive Canberra to anywhere routes. Although with my status lapsing with Velocity later this year, the advantage of row 3 and the lounge may have me moving back towards Qantas once again. Overall – great flight Virgin!