Terminal: This was my first visit to Cairns and I was quite impressed with the domestic terminal facilities available for a non capital city. There were ample checkin counters available for those who needed it, a quick and efficient security screening point and a large food/retail court from which all gates lead off. A trip up the escalators near the Qantas office and a walk down a long hallway got me to the latest addition to the Virgin Australia lounge network. 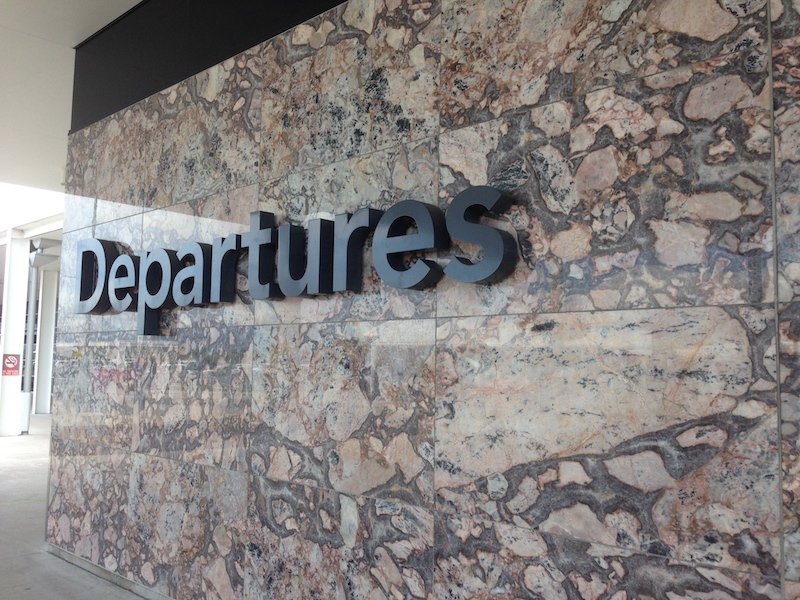 A full review of the Cairns Virgin Australia lounge will be posted this month.

Departure: The inbound flight had arrived early so boarding from gate 18 was able to commence on time for an early pushback. The captain explained that our early pushback should assist in arriving on time due to the stronger than usual head wind we would be fighting against all the way to Melbourne. The final door closed, electronics off, we pushed back, disconnected from the tug and were quickly taxing for take off. Rolling onto the runway the engines already spinning up and we were airborne about 10mins early.

After departure towards the north we took a few right hand turns over the water to make a U turn and head south. Sitting in row A provided a nice view of parts of the Great Barrier Reef before we crossed the coast again and headed for an inland track in a straight line between Cairns and Melbourne. 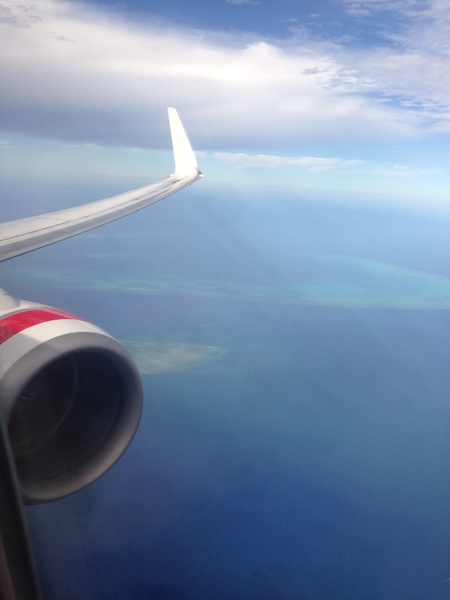 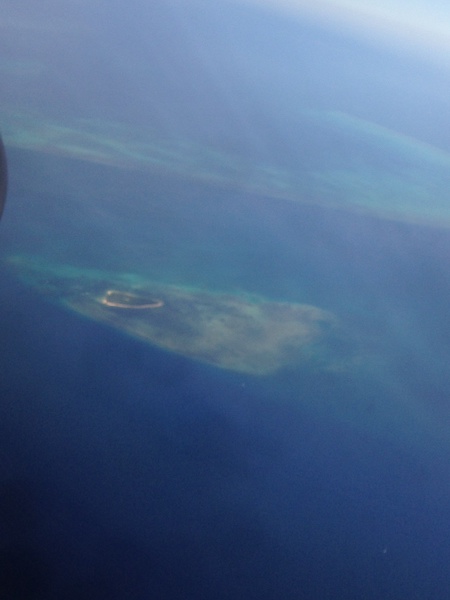 Seat: 3A. During both the booking and online check in process seat 7A was the closest seat to the front of the economy cabin. For a 3hr flight I thought it would be worth trying a little harder to get the beloved extra legroom of row 3 so asked the lovely staff at the lounge who happily moved me up the front. For those who haven’t  seen my previous reviews, row 3 provides ample legroom comparable to business class and due to the bulkhead in front also has no one reclining into it. I’d go as far as saying it’s the best domestic Y row out there. 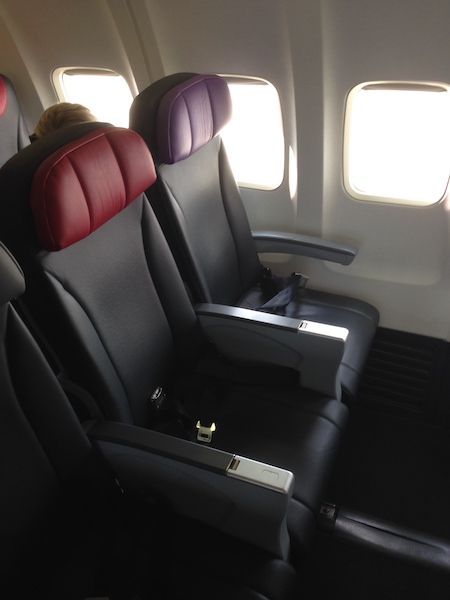 On today’s flight only the window seats were occupied meaning I had 3 seats to myself. As the tray tables are stowed in the armrests I couldn’t spread out like you can in other economy rows. Each seat is dressed in the standard grey leather with alternating red, grey and purple headrests.

Aircraft:  Boeing 737-800 (VH-) The workhorse of the Virgin Australia fleet the 737 sports the standard Virgin interior however this bird unfortunately doesn’t have the new BSI interior. Despite that it’s in good nick inside and is consistent with the rest of the Virgin fleet. 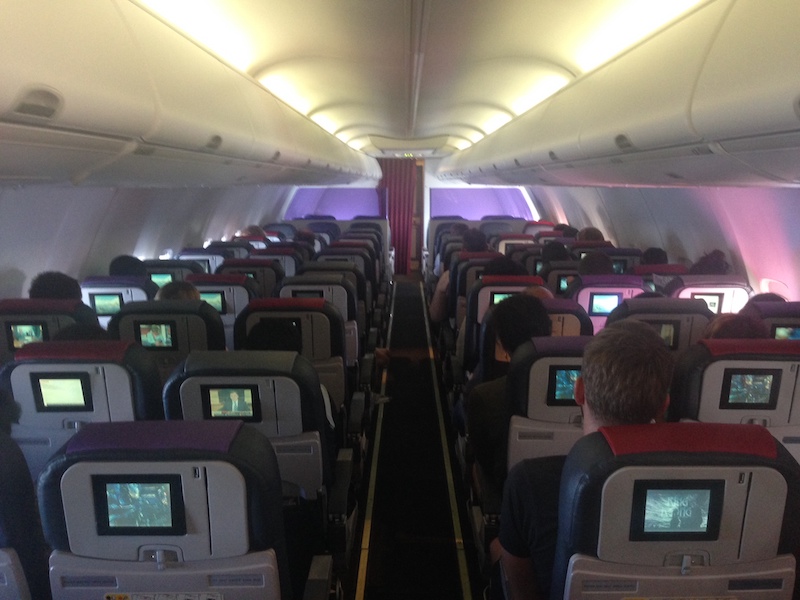 IFE: This aircraft has a variety of IFE options available including the new wireless system where you can connect your own device to the wireless network onboard and stream from a choice of 37 movies and a stack of TV and audio programming. If that isn’t your fancy (or you don’t have a BYO device, or didn’t download the app prior to boarding) this bird also has the old Foxtel LivetoAir seat back screens in all of economy (except row 3). 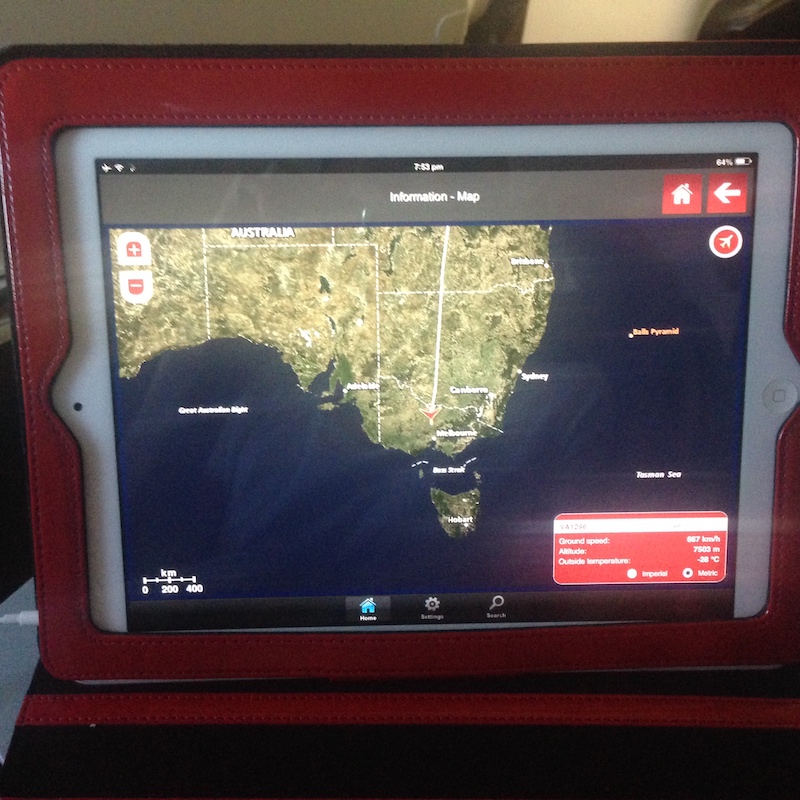 Shortly after take off the cabin crew also offered those in the first few rows complimentary use of the samsung tablets that Virgin offer their business class (and flexi-fare) passengers.

Meal: It’s rare for me to be on a domestic flight that’s longer than 3 hours however this flight provided an opportunity to try a hot meal option which are offered on longer flights. Today’s choice was a gourmet meat lie (or veggie option). Although not included in the airfare I lashed out $16 to buy myself the pie, cookie and an orange juice. The foil packaging the pie sits in makes it difficult to eat without making a mess but the lie itself was pretty nice and tighter with a sweet dessert the meal was pretty nice. 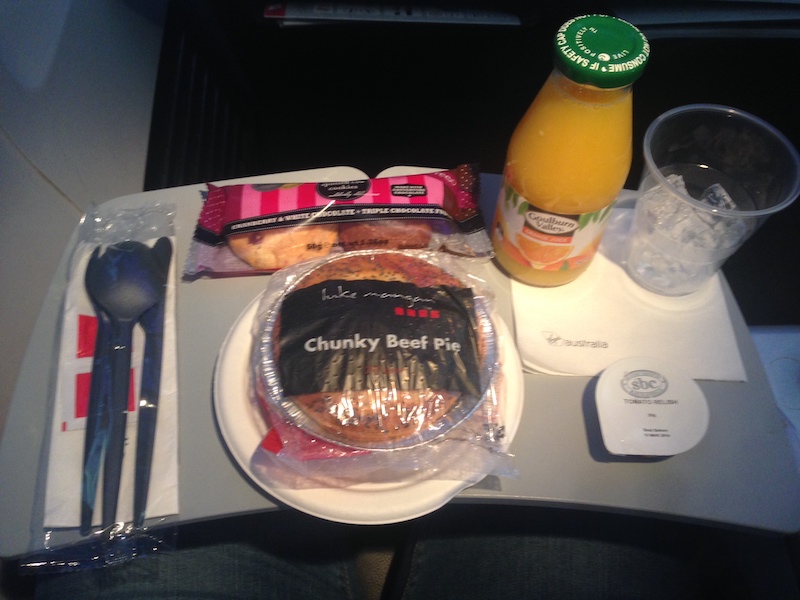 Arrival: Over the duration of the flight by sunburn gradually developed and by the time our wheels touched down in Melbourne parts of me were the same colour as the older Virgin Blue aircraft livery. Landing was uneventful and although it had been a long day of flying and exploring, its something that I’d recommend to anyone after a quick day away.

Crew:  The Customer Service Manager for this flight was very bright, cheerful and engaging during boarding and when assisting during the meal service. I got the feeling that the remainder of the crew were looking forward to ending their shifts, but overall they provided professional and efficient service.

Overall: A slightly longer flight gives more opportunities to try out the full extent of the Virgin Australia inflight service and I have to say, their product is quite consistent and I’m growing more attached to the thought of moving my domestic loyalty their way. Overall – great flight and a great way to end a #justforfun day trip.