Terminal: It was an extremely satisfying feeling walking into the terminal after a week of work knowing that the majority of the next three weeks I will be in the air or sightseeing around Canada and the United States. Before jetting off to North America on Monday, I’m attending the 6th Australian Frequent Flyer event on the Gold Coast, Queensland and thus am relaxing and unwinding (which is no longer the WiFi password) in the cosy Canberra lounge. I’ve been through here many times and for the full review, check out my lounge only review here.

One new addition since my last business flight on Virgin is the boarding pass envelope that is now provided when you check in. I think this is a neat addition and would be handy for connecting flights and keeping your baggage receipts handy, similar to what Qantas use for international connections but “virgin-ified”. Perhaps a little on the large size and hard to fit in a pocket but I guess the PR team probably want it to be seen so others can ponder how they can get one. 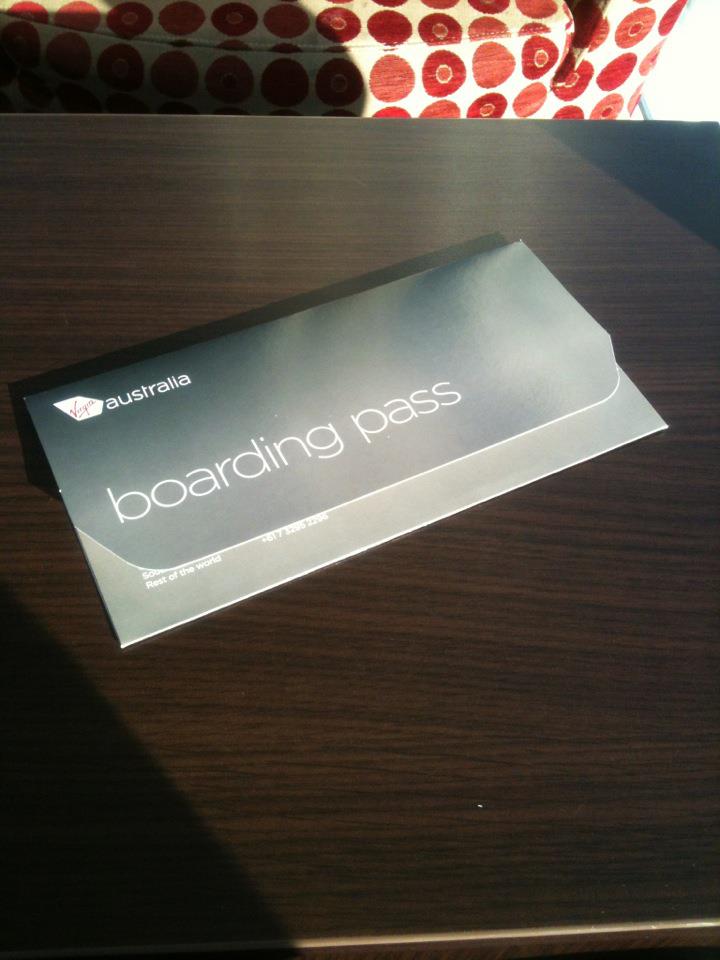 While waiting for our flight to be called I watched a few very excitable dogs get unloaded from a Qantas 737, the first was a little shy however once he saw his buddy was also being offloaded he sprung back into life and happily watched the rest of the planes forward cargo get unloaded.

Departure: Due to congestion on the Tarmac in Melbourne (where it was a lot less sunny that here in Canberra) our flight’s boarding was delayed by 10mins, which is apparently the time it takes to unload a flight into Canberra on a Friday night. Being one of the last flights out of Canberra, all that meant was a few extra minutes relaxing in the line which was getting emptier and quieter by the minute.

I’ve never flown to the Gold Coast before from Canberra but have done the Brisbane hop many times, which our flight pretty much mimicked, with a slightly earlier decent. All arrivals and departures were to the north at Canberra today, and by the time our flight was scheduled to depart the relatively constant stream of departures every 10mins or so had reduced significantly.

Seat: 1C. I normally opt for the window seat so trying the aisle was something a little different to my usual routine. I’ve reviewed the seat itself a few times which yo can read here, so although the seat is seriously in need of a little footrest, it is quite comfortable for few hours. The seat does feel however as if it is perched into the aisle a little, but this is only really noticeable during the constant flow of people during boarding after which it’s easy to stretch your legs under the curtain into the aisle if you find the bulkhead a little close

Aircraft: Boeing 737-800. Although all the 737-800 fleet are fitted with the business cabin, this bird is still holding onto its Virgin Blue history with the standard red livery. The interior fit out includes the forward 2 row business cabin which is separated from the main cabin by a perspex mini bulkhead. Unfortunately there is no Boeing Sky Interior on today’s aircraft but otherwise its a clean and well maintained interior. 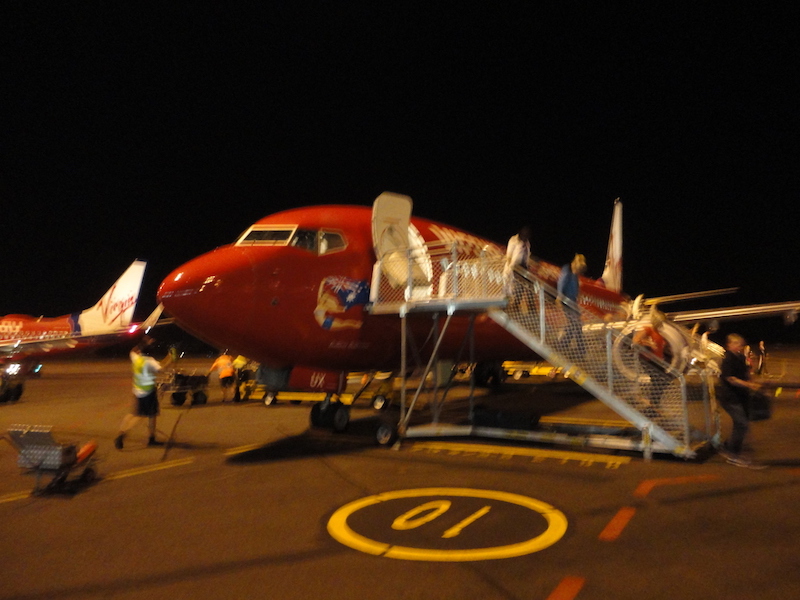 IFE: The Samsung galaxy tablets and personal take home headphones were waiting in each seat pocket in the business cabin. This is a nice change and saves having the crew spend time distributing them after take off. Pre loaded are a variety of movies, tv shows, music videos and radio/music tracks. For longer flights the movies would be good however on a 1.5 hrs segment, by the time electronic equipment can be used its not really worth trying to start one. There are roughly a dozen or so tv programs to watch, however as each option only contains one episode, don’t try to start a family guy marathon mid flight.

The music and music video options are a good choice to pass the time on a short flight after you’ve watched your favorite tv show. Overall the galaxy is a huge improvement on the digeplayers but personally I’m much more a fan of gate to gate seat back entertainment. Alas the tablets seem here to stay so it’s best to just make the most of them, although a little more tv content would be good. 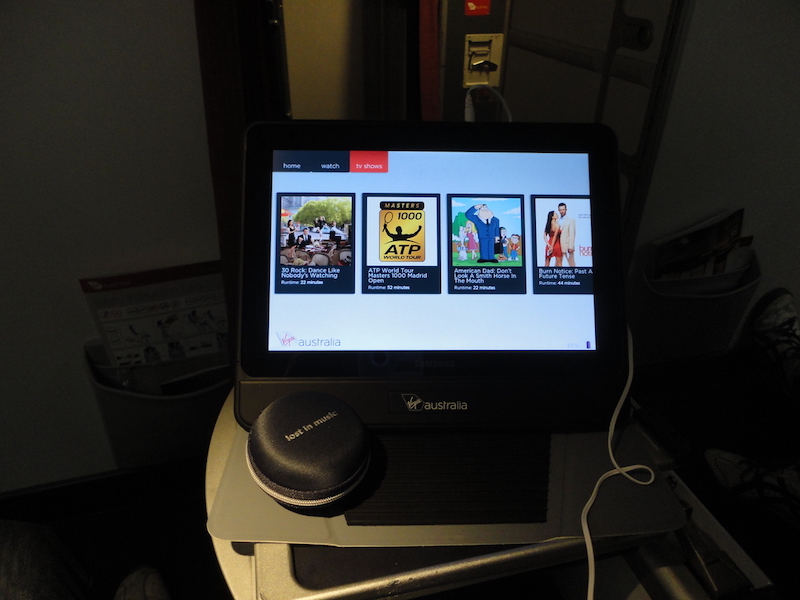 Meal: On boarding we had the usual choice of pre flight drink, water or the signature “the Australian” mocktail. After attempting to make this at home on more than one occasion, I went for the mocktail, which I must say is much better when mass produced (by someone else) and served in a little airline glass. This flight fell within the dinner time slot and tonight’s dinner service tonight included a choice of a lamb penne pasta or a feta and rosemary cannoli. I decided to go for the lamb although on serving it was more like penne and meatballs, and they tastes more pork/mince mix than lamb, although nice none the less. 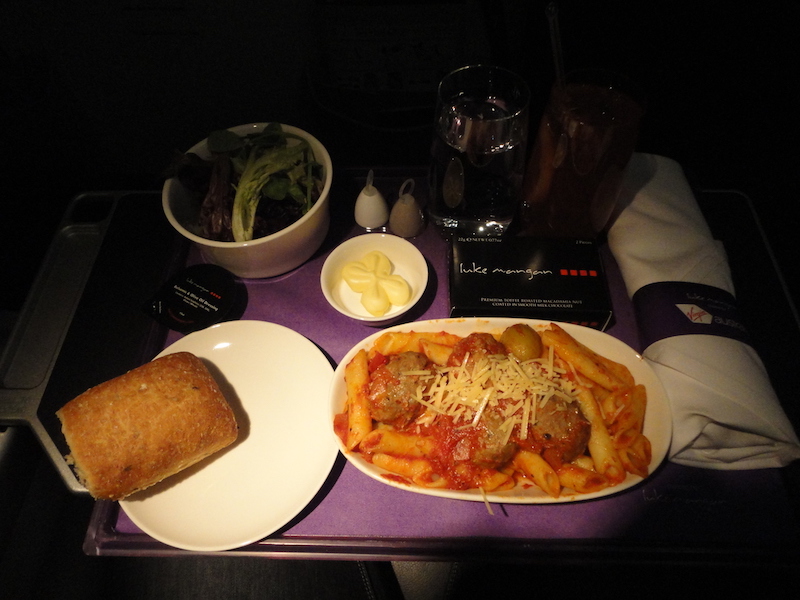 Accompanying the main was a side green salad (code for various types of lettuce) with a balsamic dressing, a hot bread roll and a Luke Manigan toffee toasted macadamia coated in milk chocolate as the dessert. All in all not a bad feed which occupied a nice chunk of the relatively short flight north. Drink service flowed well throughout the flight from which I opted for the Australian mocktail with the addition of a few generous splashes of gin to make a nice “the Australian” cocktail. 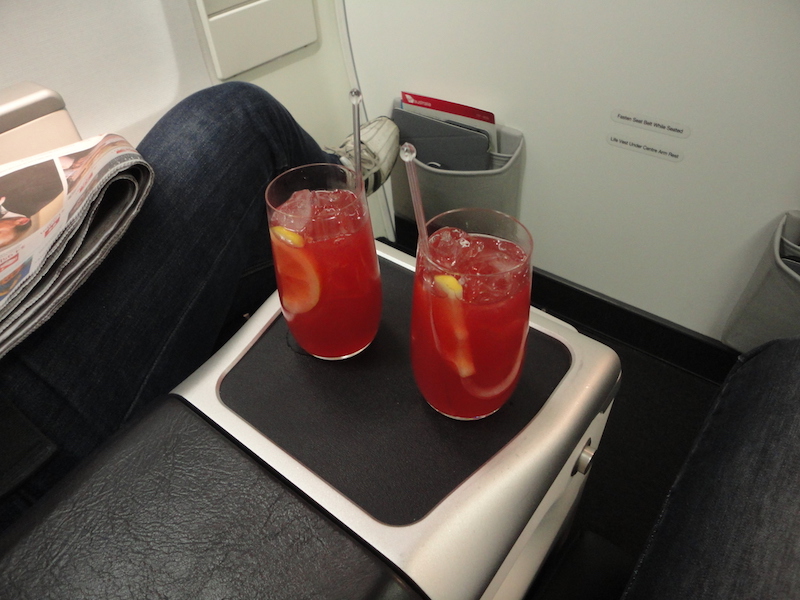 Arrival: Arriving from the south we touched down on time before rapidly decelerating along the rather rough and bumpy Coolangatta airport main runway. Sitting on the left side of the aircraft there wasn’t much of a view however those on the opposite side of the aisle got a sneak view of the buildings that light up the edge of the gold coast. If you’re not a fan of doing the walk across the tarmac then the gold coast isn’t for you as there are no jetways here at all (try Brisbane and take the train if a jetway outweighs proximity). I actually find the walk across the Tarmac more appealing than a jetway as when I take that first step onto the air stairs I feel like I should pause and wave to the waiting media scrum – but as I’m not famous nor have a paparazzi following, I skipped that step and made the short walk into the terminal.

The last time I flew into Coolangatta it was in the early days of Tiger Airways and only used the shed that Tiger originally used so this was the first time in the terminal. I had heard it described as a food court attached to a runway (quote to @Li_Ras) which is a pretty accurate description. As this was an evening arrival and our aircraft was been used for the last outgoing flight for the night the terminal was pretty quiet and most of the food court vendors had closed up shop for the night. After my better half arrived in on Jetstar about half an hour later (and yes, putting him on Jetstar while I flew business wasn’t well received) we grabbed a taxi into Surfers ready for a weekend of theme parks and frequent flyer events.

Crew: The crew were efficient and friendly but not as chatty as the majority of the Virgin crew I’ve had in the past (which isn’t necessarily a bad thing, just different). Service was prompt and despite a few ice cubes going astray I managed to finish off a few drinks during the flight, which were refilled pretty quickly. The cabin was ready for landing in no time today with everyone working like a well piled machine and no chance of any glasses being forgotten before landing today. Overall a good crew but it didn’t have a “bringing back the romance” feel to it, perhaps it’s because they were returning to Canberra and didn’t have any evening plans.

Overall: Efficient service and nice food, accompanied by an IFE option made the flight comfortable and fly by. As opposed to Melbourne or Sydney, the slightly longer flight to the Gold Coast made the meal more comfortable as it wasn’t a rush to get the food out and cleaned up in the shirt hop, yet the overall flight wasn’t long enough to get bored with the smaller selection available on the IFE. The smooth flight was a nice start to the weekend of thrill rides 🙂