Seat:1A. As the aircraft is all economy, its a chance to get in the first row without paying for Business or First class tickets. I did pay more for this seat (although when the flight itself only cost 8 Singapore Dollars, I felt I could lash out a bit and buy the front row. If I had of known the entire row was empty, I would probably have picked the Isle or Centre seats as the curvature of the aircraft cuts into some of your legroom (probably greater effect in the back of the plane than this seat). The legroom is otherwise good for a bulkhead seat, especially when no-one is sitting in the row with you (at 11pm, I shouldn’t have been surprised). The tray table is in the armrest and was a little stiff to get in and out but nothing too hard. The seats have red leather head rests which are a nice touch for an otherwise basic cabin. Plenty of overhead space as there wasn’t anyone else in my row, however if it was full the “no stowage” section directly above may be annoying (especially as you cant have things at your feet during take off and landing). 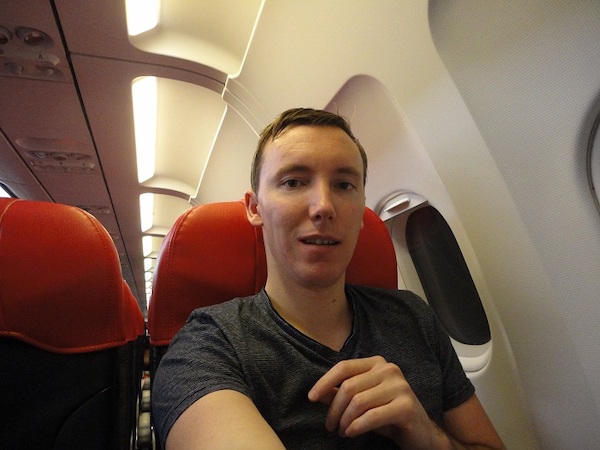 Aircraft: Airbus A320 (Rego Unsure). This is the first time I’ve been on the A320 for a while (last time was when flying with Tiger in Australia and Air New Zealand before that many years ago). I actually like the A320 although from the outside it doesn’t look as sleek and sexy as a new 737-800. Anyway, back onto this aircraft. The aircraft didn’t feel that new, and during take off and the climb it seemed to creak allot (not sure if that’s cause I was tired and sleepy and just normal noises). Anyway, Air Asia are a budget airline and thus the only class you have is economy, thus that’s what you’ll find the plane full of – economy seats. The front galley is small (but as most people don’t get a meal as they don’t want to pay for it, you don’t need to waste valuable seat space for kitchens. I like the control system that the flight attendants use to dim the lights etc (not sure how its done on a 737 as the galley always blocks the view). The front row has a small divider between you and the number 1 door (clear on the left, solid on the right). 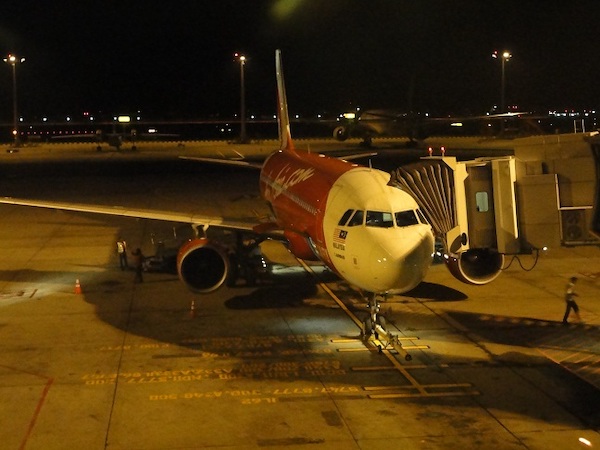 Terminal:Singapore Terminal 1 is massive (as is the entire Singapore Airport – more on that another day). My Qantas flight landed at Gate C something and I the AirAsia flight from Gate D something which was a hefty walk. This one terminal alone makes Australian airports look tiny and it was great to explore. Each gate however has its own security scanning (x ray etc) which means once you have been cleared by security you sit in effectively a glass box while you wait for your flight to depart. Its different but I guess makes it easier to ensure consistent security is applied for passengers in transit. I lost my toothpaste here. Dam you LAGS regulations.

Departure:The 11pm departure was a little delayed, again due to the late arrival of the aircraft to Singapore. I was amazed at how fast they turned the aircraft around. These LCC’s sure know how to maximise their aircraft utilisation. I think it only took them about 20mins from gate to push back. The taxi for take off was pretty short, with just enough time for the safety demonstration (in 2 languages) before we climbed out for KLLCT. Strangely during take off they didn’t just dim the lights, but turn them all off which was a little eire to be honest as the left #1 door creaked and groaned all throughout the climb (although noises are louder in the dark). As it was dark (and apparently a little cloudy) I didn’t get to see anything other than a few ships during the flight, which was estimated at 35mins.

IFE: As Air Asia is a Low Cost Carrier (LCC) there wasn’t any IFE that I noticed (e.g. no TVs etc). I don’t recall even seeing audio channels available. There was an in flight magazine which was very well worn but other than that there wasn’t much to do other than fill out the immigration arrival card and flick through the torn magazine. If the flight was longer I’d definitely use my ipod or something, but at 30 odd minutes it wasn’t worth it. 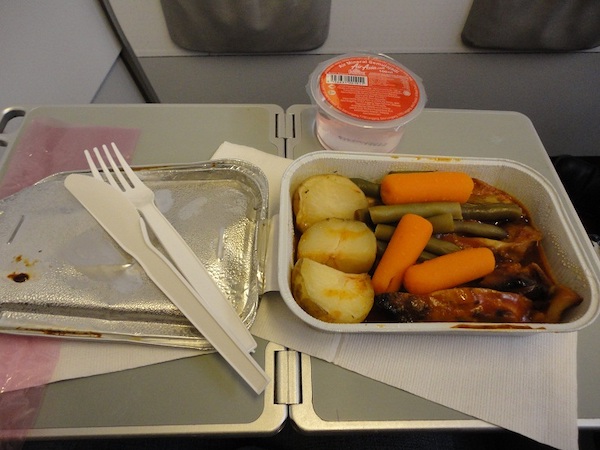 Meal: Apparently I pre-ordered and purchased a meal for the flight (I don’t remember doing it, but Air Asia’s booking systems seems to add everything and make it very hard to remove as you make the booking – I think I removed insurance 3 times!). Anyway the meal was apparently “Roast BBQ Chicken”… I think there was chicken there, and it may have been roasted (or boiled) but it definitely didn’t taste like any roast I’ve ever eaten. Now for the record I generally love airline food, however whatever this was was pretty much inedible. Other than being extremely hot, it tasted pretty much like salt and something I couldn’t (and didn’t want to think to much about) place. Thus after a few bites to make sure I have it a fair go, i folded the tin lid back over and kindly offered it back to the crew for disposal (i’d say incineration, but i think that had already happened).

Crew:Very friendly and helpful (even offered me a pen to complete my immigration forms). Given the short flight, lack on any real service there wasn’t much interaction other than the Welcome, Safety Briefing and then thanking us for flying with them. During the walk from the aircraft to the terminal (see more on that below) the only male flight attendant on board chatted to me and asked if it was my first trip to Malaysia. He was glad to hear I had someone picking me up, and was very excited to hear about my trip from Canberra today.

Arrival:I must say that the word “Landing” needs to be used very loosely to describe how we arrived at Kuala Lumpur. This “landing” was without doubt the worst landing that I have ever (and hopefully will ever) experience. I’m not shy of a rough landing (Canberra often experiences them), however this wasn’t even in the same ballpark. My first touch of Malaysian soil was in the form of a hard bounce, which in my experience are generally quickly followed by the second (and final) touchdown without much of a gap between. This bounce did NOT follow that pattern but instead seemed to “hang” in the air for a really long time (if the engines weren’t so quiet you would think we’d just done a go-around). That silence was broken with the loudest and hardest thud onto the runway that I’ve ever had. I’ll be honest  and say it scared the crap out of me (although the crew strapped in up front also let out a yelp – i just swore!). I turned around to check if the rest of the plane was still attached, half expecting to see it scattered along the runway.. Fortunately it was still there as we made the long taxi to the Low Cost Carrier Terminal.

Arrival Terminal:Normally I just leave these reviews at Arrival, and don’t review the arrival terminal, however as I didn’t fly out of the Low Cost Terminal again, I think its definitely worth a bit of a review in itself. The walk from the aircraft to the terminal is not insignificant – fortunately at midnight it wasn’t as hot as it is during the day, but it was still very balmy. Once at the building there is a large immigration hall where you have your passport stamped and fingerprints taken before walking around a hallway and then pretty much straight out onto the street. I think I passed through Customs, but there didn’t seem to be anyone there. Fortunately Cam was there to meet me an negotiate the Bus/taxi ticket combo to get us back to his apartment as its very different to anything I’ve experience before (even Tiger’s Terminal 4 at Melbourne). Worth a look and great experience, but I must admit I was glad my homeward flight departed from the main international terminal – although given how much I paid for the flight, you can hardly expect the red carpet.

Overall: Well everyone says first impressions are what makes a flight/experience stick, however in this case the horrid “landing” eroded almost all good experiences that happened before then. I think that the flight itself and the crew where pretty good, although definitely not the meal or landing. If I’m ever around Malaysia again (and I hope I will be) then I will try Air Asia again to hopefully give them a better review. I expect that when I take that flight and we come into land I’ll be holding my breath waiting for a repeat of that horrid landing, which hopefully won’t eventuate.