While visiting friends in nearby Ocean Grove we were taken for a short afternoon drive to the western edge of Port Phillip Bay and the seaside towns of Queenscliff and Point Lonsdale. On arrival into Queenscliff we headed out to the Ferry Terminus which, by the looks of it has undertaken some serious modernisation, presumably to attract the lucrative tourist dollar to his seaside town. Although from the car park the buildings looked rather unattractive, a short walk around past the dive shop (where a group of divers were disrobing and cleaning off their gear) revealed a modern and stylish promenade of cafes, tour operators and seaside stores overlooking a newish marina. 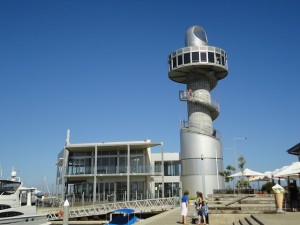 Dolphin, Fishing and Scuba tour operator boats as well as a few pricey looking cruisers filled many of the docks of the marina while a constant parade of tinnies and jet skis entered and exited the small marina thats seemingly nested between the peninsula and nearby swan island. If you were looking at heading out on the water, this would be a good place to start out, however for us the lookout tower above was our destination. Top of a wine bottle, giant plug or simply something that looks like it needs a giant crane to pick up are all descriptions for this interestingly designed lookout tower. 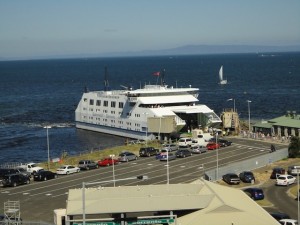 You can either take the 137 steps that circle around the tower, exposed to the blasting winds from bass straight as we did or you can take the short elevator trip to the viewing platform to take in the 360 degree views. If you do take the steps, don’t count them as its quite a tight curve that the stairs follow, which combined with the wind in your ears and the vertigo when you accidentally glance through the wires that prevent you from falling off the side, makes you a little dizzy when you reach the top, or was that just me? 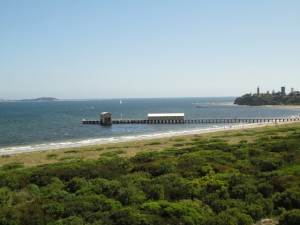 The view from the top are actually quite spectacular and diverse. The view across the marina inlet is of Swan Island and it’s secret military base (that everyone knows about) which is linked only by a small bridge from the peninsula, surrounded by a sandy beach and covered in scrubby bush that you find along much of the sandy coastal areas of the bay. The noticeable difference between the water of the bay here, as it joins bass straight is the clarity of the water which you can see through to the sea floor without the dirt and pollution that you find within some of the bayside beaches. Moving clockwise around the tower we are greeted by the arrival of the Ferry from Sorrento which quickly maneuvered into place at the end of the road before its mouth like doors parted their jaws and began spewing cars from its holds. The ferry makes the crossing between Queenscliff and Sorrento in about 40minutes and runs every hour, on the hour between 7am and 7pm during summer (7am-6pm during winter) which a series of neatly lined up cars were awaiting to board. 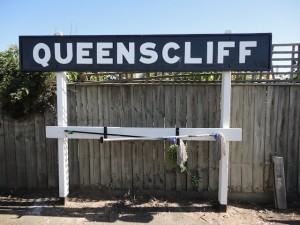 Continuing the clockwise tour of the tower you get a great view across the varying shades of blue of the bay, scattered with various pleasure and fishing boats to the Mornington Peninsula side of the heads. Considering the size of they bay, the amount of water that enters and exits between these relatively close heads between each tide is pretty impressive. Called “the rip” this is a tricky shipping route and accordingly, shipping navigation into the port of Melbourne is always done with the assistance of a pilot. There were no cargo ships passing today, however the lighthouses that were the pre-gps source of navigating the rip remain. As we move further around the tower, Queenscliff and Point Lonsdale come into view with their White and Black lighthouses. I’m told that these are coloured so they can be lined up to direct traffic through the rip.

In the foreground the arch of the sandy beach between the ferry terminal and the black lighthouse of Fort Queenscliff with a long pier extending out to sea looks extremely inviting for a long run along the beach or a splash in the gentle lap of the water across the sandy beaches. Alas our energy levels today are more attune to a relaxing hot chocolate than a run along a beach so we quickly take in the view of the marina from above before heading down the spiralling stairs for a drive into town for a hot drink. If you are looking to take photos, the glass of the viewing deck isn’t the cleanest and I found my camera seemed to focus on the fingerprinted glass rather than the distant views. To overcome this you can take fingerprint free photos from the open air staircase that leads to and from the viewing area. The beauty of these photos is that the viewing deck above also cuts out much of the glare that you’ll find washes out the photos from above. 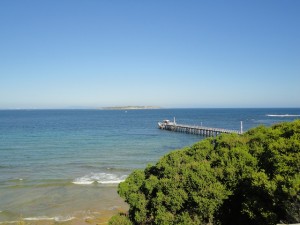 After ordering a banana chocolate from the local choccolatte cafe I zipped across the road to the Bellarine Peninsula Railway (primarily to use their facilities, but it was also a good chance to check out the railway). For $20 you can leave the car at Drysdale and take the historic steam train down to Queenscliff or on selected nights they have a Blue’s train where each of the four carriages has a different band which entertain you as you eat and presumably drink the evening away. I am presuming that some may drink a little too much on this train as beneath the “Queenscliff” sign at the station hang several mops, presumably used to clean out the carriages after a big night on the turps. The small railway station lies at the end of one of Victoria’s first branch lines and would have originally brought in people from Melbourne for a seaside getaway to Queenscliff. Prior to the railway a paddle steamer trip across the bay was a popular transport method for the 1880’s seaside resort town. The car opens up so many other places for tourism, however I think it removes the stoic or even sometimes romantic notions of arriving by steam train or ship that would have been the norm in the history of this town. 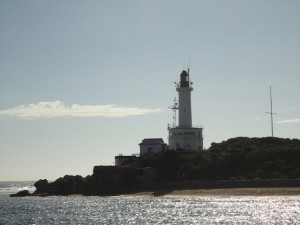 The hot chocolate hit the spot and soon we made our last stop for the afternoon during our short outing to the Bellarine Peninsula. Point Lonsdale, the home of a white Lighthouse and lovely pier littered with fisherman each casting multiple lines between the heads of the bay was our last stop. A short walk from the car park through the scrub provides great views of the lighthouse, the opposite head at Point Nepean and the quaint Pier. Passing a wedding party taking photos with the lighthouse silhouetted by the sun in the background, we took the short walk to the end of the pier which revealed some insights into the taste of some of the fish in the bay with one fisherman was using chicken fillets as bait. Besides the smell of fresh fish (or stench of old bait), the views back to the lighthouse are worth the short walk as the suns reflection makes the water shimmer as the gentle waves slowly move beneath. The amount of people fishing off the pier makes it feel like you did arrive here during the steam era and the lack of any visible modern development since that era it feels quite unspoilt and was a great way to end our afternoon in the area. 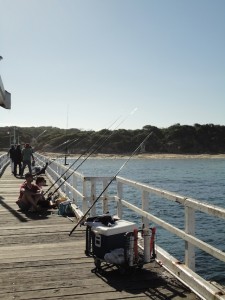 Returning to Queenscliff the next morning for a quick spot of breakfast was a fitting way to close our visit to the seaside. Sitting between fort Queenscliff and the sporting club / caravan park lies a small portable like building that serves breakfast to the predominately tourist and beach loving clientele. Sitting on backyard tables and chairs watching beach goers wash sand from their feet and dive gear while eating away at a country sized “big breakfast” was a great way to start the day before heading back home unfortunately a little earlier than originally planned. This short visit has filled my mind with many ideas for future trips around the area, including a trip across the bay to Sorrento or a day just sitting on the beach watching the ships go by. 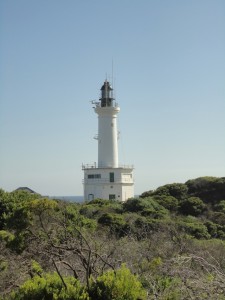 By Car: It’s about an hour and a half drive from Melbourne (Very boring drive along the Freeway and lots of traffic lights in Geelong, but otherwise easy). Alternatively you can drive to Sorrento which takes about the same time, and then take the 4o minute ferry across.

By Public Transport: It can be done, but its a combination of V-Line and regional buses via Geelong or Metro Train, Local Bus and the Ferry via Sorrento. A search on Metlink Melbourne provided trips from between 2.5 – 3 hours.