The vast majority of my blog contains airport and flight reviews, so, I thought to give you some idea of what I do, and thus what you might want to do after one of these flights, I’m branching out just a little and writing some more OnDestination reviews about the places I visit. I’m somewhat reluctant to make this review the fresh start for that series as for the first time in a while its a less than favourable review of an attraction I visited this weekend while visiting Rotorua on the north island of New Zealand (yes I went to NZ for the weekend – I like to fly – moving on). I thought of saving it for later, but I think its only fair to be honest and upfront and not being all social media friendly and only writing about the good. So, here goes!

Rotorua is known for its geothermal activity, and if you follow any of the tourist buses that flock to this city from Auckland or speak to anyone at the tourist information office you’ll probably end up at Te Puia, or as we called it, the Geyser Park. Why do the buses come here and why do people recommend you end up here? Well it’s probably trying to satisfy the inner human curiosity and/or fascination of watching the earth fire water into the air in the same style as a fire hydrant that’s just been hit by a car does – either that or you’re interested in geothermal activity and all the geology and science behind that. However, most people just want to see something cool that doesn’t happen where you live. And that’s pretty much how we ended up here. 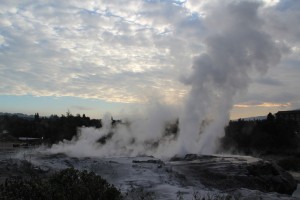 Arriving into Rotorua in the afternoon we checked out the local tourist office to ask for a map so we could find our hotel (how do people find places without GPS and Siri?) and before we knew it we had skipped the hotel, found a gaggle of tour busses (busses are like geese yeah?), parked the car and were standing outside the ticket booth, gasping at the cost of entry to see what the driver described above aims to avoid. At $47.50 a head (albeit NZ dollars) its not exactly loose change to get into this park and my mind was split as to whether watching hot water squirt out of the ground was really worth that kind of investment. The high price did however have some attracting element to it with part of my mind thinking, well if people are paying $47.5o to get it, then it must be good, right? (don’t judge – we’ve all paid for something crap before just because we thought it was good because it was expensive).

So, tickets paid for (which a 10% discount was given after we’d already agreed to pay – note to sales staff – discount before sale may have made sale easier!) we scanned our tickets at the high tech entry point and were ready to explore all the $47.50 (less 10%) park had to offer. With only 1:15hr before park closing time the ticket staff were worried we wouldn’t have time to see all the park had to offer and suggested the guided tour to make the most of our time which gave us about 15mins of free time before said tour began. 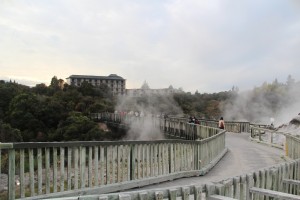 The lookout closest to the gate provided views of the main geysers which were erupting in what appeared to be full strength as we arrived. Working to nature’s clock only we decided to head straight to the geyser to get close to said eruption in case the geyser had performance anxiety during the scheduled tour. The map makes the park look quite large, however in reality ITS NOT!. The walk from the lookout to the geyser is complete in about the same time it takes to read this paragraph (while walking – watch that pole!). On arrival it is kinda cool and very much like a fire hydrant or hose squirting water into the air, only that this water is boiling and thus there is a heck of a lot of steam in the air and a fairly strong whiff of rotten egg gas in the mix as well. There’s a wooden footbridge across a creek where the hot water eventually falls and flows into and a few other tourists around taking photos within the steam. There are a few signs around telling you the name of the geyser and that hot water comes out of it on its own time schedule but other than that not much information so we rushed back to the gate to meet the guided tour to learn more about this cultural landmark and what it’s all about. 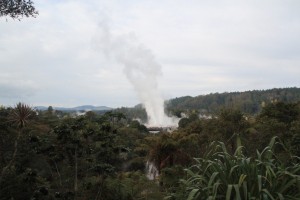 Meeting the guide who was ready to depart with a large group we were invited to join the “family” for the tour and as the geyser was still in eruption we were heading straight to the geyser where we would be given more information. So, 10mins into the park, we’d now been to the main attraction – the geysers, twice. On arrival at the Geyser the guide advised us that as long as we stayed on the bridge she would know where we were and wouldn’t leave anyone behind (I’m sorry, did we go somewhere where we were likely to be lost – we’d travelled for 2-3minutes max!) Anyway, cynicism aside we waited for more information on the geyser which was finally provided. In summary, that consisted of: “shoots out water between 95-98 degrees… its shoots when it wants… it’s not controllable by man.. and we’re off to the mud pools” and off we departed. Um excuse me? Information, Hello.. oh well… Mud pools must take up more time.. 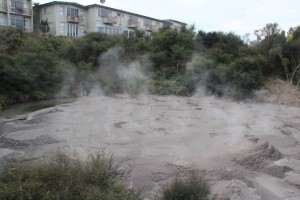 Arrival at mud pools a few minutes later (ok, maybe 1-2minutes)… “dirt.. hot water.. mud… cant build hotel that close again… always same temperature… off to the kiwi house”. Seriously – for a guided tour this tour wasn’t actually adding anything that wasn’t on the sign’s which provided painfully little information. The kiwi house (using your imagination to see the Kiwi’s in the dark) was the last straw in my tolerance for the tour and at that point we peeled off and decided to do some filming and check out the rest of the place solo as the tour was (to that point) adding no information, and especially not $47.50 worth of information.

The rest of the park contained cultural things like a collection of small huts (with no signage to explain what it was), a boat, an area for cultural performance (which granted we had missed for the day so that may have been interesting/worthwhile) and some wood carving and weaving schools. However, the main attraction of the park, the geyser was seriously oversold and under delivered. So, having taken photos around the park to add to this review I decided to film a quick video blog to give a quick rundown on the park (see video below).

I think overall the park had some potential to showcase these geysers and satisfy that inner curiosity of how the earth manages to do what we can only do if we crash our cars into fire hydrants however the execution and the price was really poor! My suggestion to travellers would have to be to give this attraction a miss. It’s simply not worth the entry fee! As I said in my blog – the hotel nearby might be a cheaper option to see the same sights. 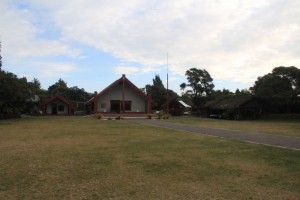 Now to wrap up this OnDestination review in a positive way; did I enjoy myself?  Yes – I must admit I had a great time in the park. Do I regret going? No – but I really had to work for it and make my own fun. For me that was turning it into a video blog post and gathering information on how poorly the park showed off its attraction. Unfortunately for 99% of guests – writing a travel blog about how badly something is done isn’t going to satisfy them. So, if you find yourself forking over money to attractions that are quite simply overpriced and not meeting your expectations, try and make your own fun too. Whether that be making up your own stories as to why the water shoots out so irregularly or prematurely (naughty), or by pretending that you speak another language and interpreting everything into that language, make your own fun. You’ve already paid, you’re not getting that money back so you may as well enjoy something about the day – that’s what travel is all about!