Today’s post is the first in a series about things that you can see and do around Melbourne. Wanting an easy place to flesh out the idea of doing a bit of pseudo travel writing, I wandered into the city a few weeks ago and thought, Flinders Street, the transport hub of the City, what a logical starting point for a tourist. The next step was, now that I’m here, what am I going to write about thats not going to set me back an arm and a leg. As you may be aware, this site is on a budget, and that budget consists of 1 figure only, and it’s not found between 1 and 9. With the budget in mind, I thought the logical step would be to review things that are free, so have decided that Series 1 will start off looking at what is on the City Circle Tram Route, arguably the cheapest and easiest ways to see some of Melbourne’s history and attractions. Best of all, Its Free!

So Episode 1, Series one starts out at Flinders street Station. Originally the site of Australia’s first city railway station, Melbourne Terminus as it was known since 1854, became the subject of a world wide design competition which resulted in railway employees Fawcett and Ashworth’s winning a design contest in 1899 with their French renaissance inspired design. The design, “Green Light”, included the central green dome and tall clock tower at the intersection of Swanston and Flinders Streets as well as an arched roof train shed across all the lines. Unfortunately with costs escalating the train shed was scraped from the plans and instead individual platform roofs were built. 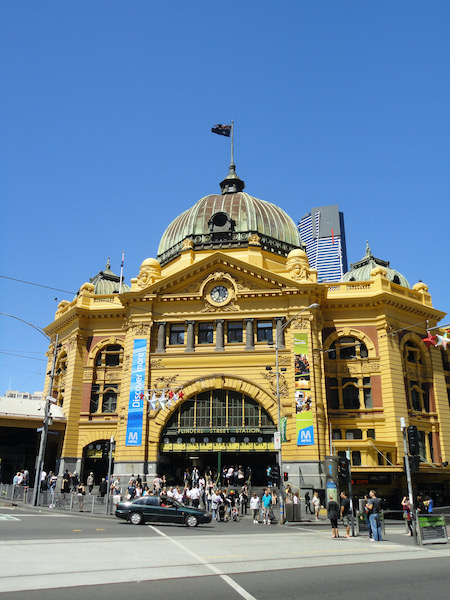 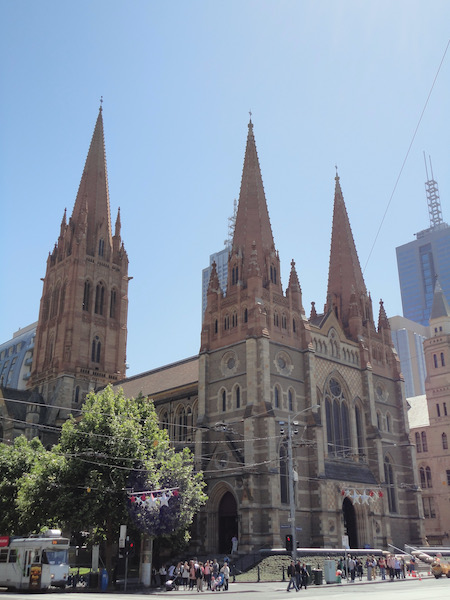 The iconic row of clocks that greet tens of thousands of passengers every day have shown the departure times for each line since the original terminal in the 1860’s. Carefully removed from Melbourne Terminus during construction they were installed in the new station after construction was complete. The station as it stands now took ten years and a royal commission, after running a year late, to construct before being officially opened as Flinders Street Station in 1910. A hundred years later, that kind of delay is almost as good as the train operators on time performance records. Although, generally speaking the train will get you around pretty easily.

The station was once earmarked for demolition during the 1960’s but fortunately was saved after public outcry, and although most users only use it as a means to get into or out of the city, it is a grand old building thats worth a photo out the front of. If you are wondering why there is always people sitting and standing on the steps under the clocks, they aren’t all getting a photo for the holiday album. “Under the Clocks” is a very easy place to meet people in the city, due to the fact that you’re at a train station, and the fact that the clocks are such an iconic image of Melbourne. So you if are meeting up with someone, and don’t know where to meet, say under the clocks and I reckon you have a good chance of finding them. Just make sure that if you are traveling on the trains, you have a ticket, as the ticket inspectors can get rather enthusiastic if they find you without one. 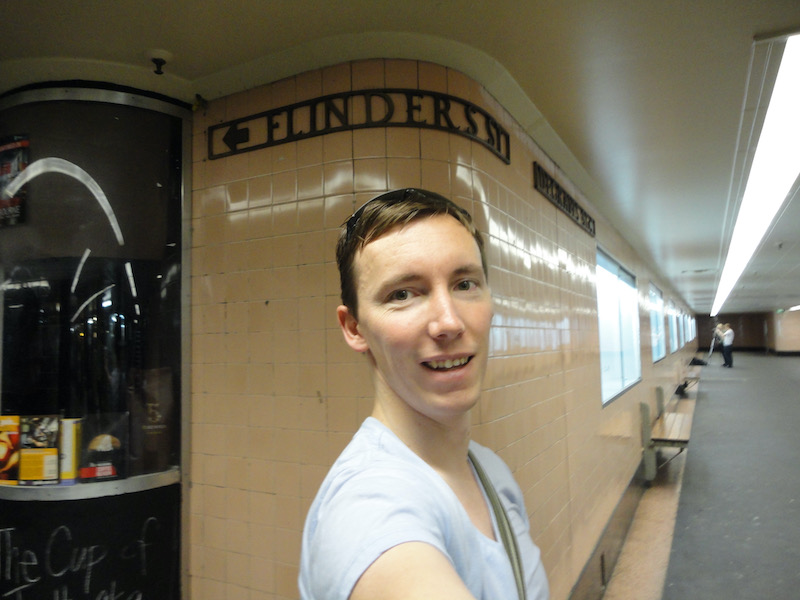 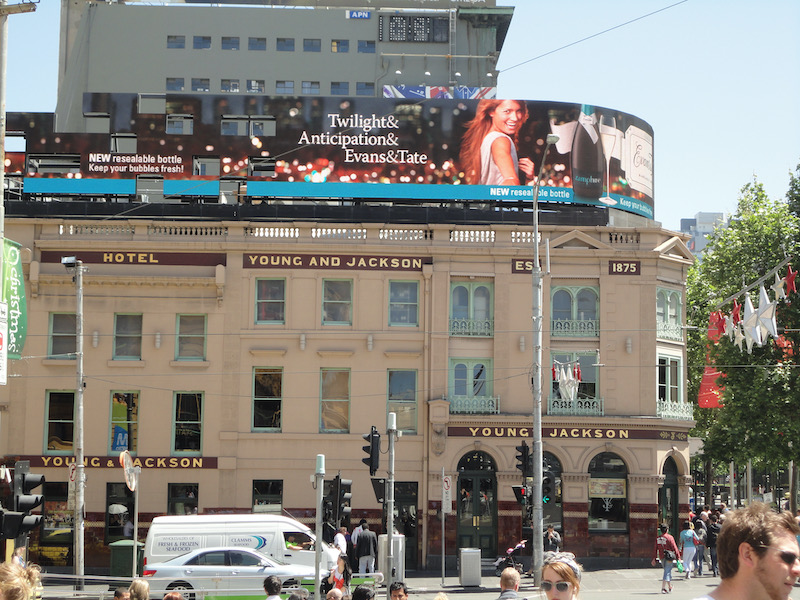 After arrival, and before you rush across the road to get onto the freebie City Circle Tram, there is plenty to see and do around Flinders Street Station itself. That said, let’s look at just a few of the big things you’ll see as soon as you exit the station, but before you step foot on the tram.

I started the trip just before lunch on a Saturday morning, but if you were here in the afternoon, you could walk across Flinders Street and grab a beer at Young and Jacksons. The pub, bought by Irish Diggers Henry Young and Thomas Jackson in 1875, originally consisted of 5 buildings, the facades of which were all painted and rendered to match in the 1920’s. Since then the exterior has remained dominated by billboards and advertising at this prominent Melbourne intersection. These days its dominated by Channel 7 news feeds and a giant video screen. Other than the news feeds, Young and Jackson’s most notable attraction is a nude painting, Chloe, which was bought for the hotel after a brief exhibition that only lasted 3 weeks at the National Gallery of Victoria.

After an uproar from the Presbyterian Assembly forced it to be removed, it was purchased and has hung within the hotel. Although damaged by an American serviceman in 1943, Chloe remains on display to this day. Even if you don’t want a beer, wander inside and head up to the first floor. I was there in the morning, and the upstairs was closed so I didn’t get to see the painting, however I noticed a family of holiday makers had sweet talked the bar staff to let them upstairs anyway to have a look. Unfortunately, I obviously didn’t have the charms of the family taking an eight year old to see a naked lady as the family group did ,as they didn’t let me go up, but if you’ve travelled a distance to see it, there is no harm in asking.

If you’re after a little more conservative day, or are similar to those of the Chloe uproar of 1883, older church buildings might be your cup of tea. Right across the road stands St Paul’s Cathedral. Built in the late 1800’s from sandstone, rather than the more prevalent Melbournian building material, Bluestone, its warmer than some of the other older Melbourne Buildings. The spires were recently restored in the 90’s after fears that the constant tram and car vibrations affected their structural integrity, thus they are slightly different colour than the rest of the building. Although a modern city by European standards, there are still plenty of older buildings around Melbourne that stand out between the new developments and provide some history to the city.

There are church services on in here, so depending on how religious you are you might want to check the times before entry. Even if you’re not overly religious, its worth a quick look inside as the building itself is pretty worthwhile. Not amazing by what I imagine the several hundred year old cathedrals of Europe to be, but on the Australian timeline, its worth a look, although be prepared to put on your inside voice (it is a church after all). Its amazing that no matter where you are, you can step inside a church and its like the cone of silence has been lowered from above (no theological pun intended) and this church is no different. The stain glass windows, high spirals and detailed stonework appeal to even the non religious visitor. 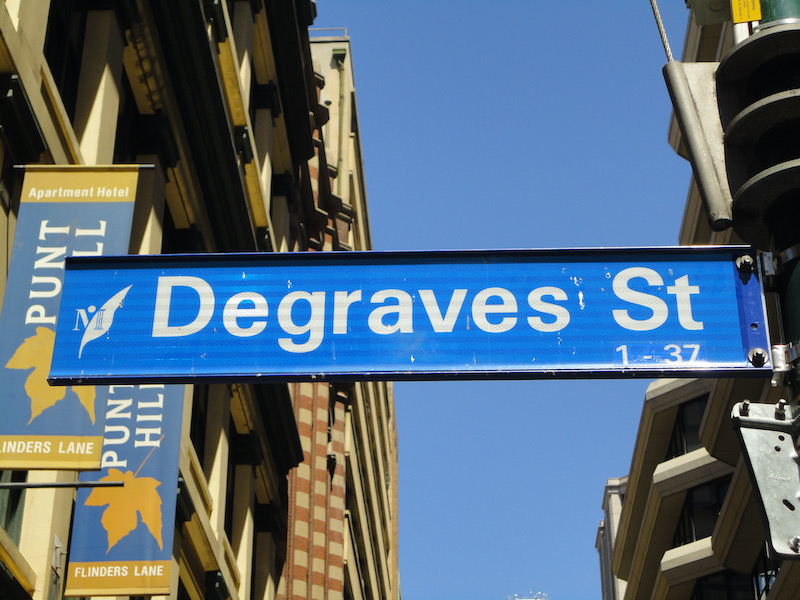 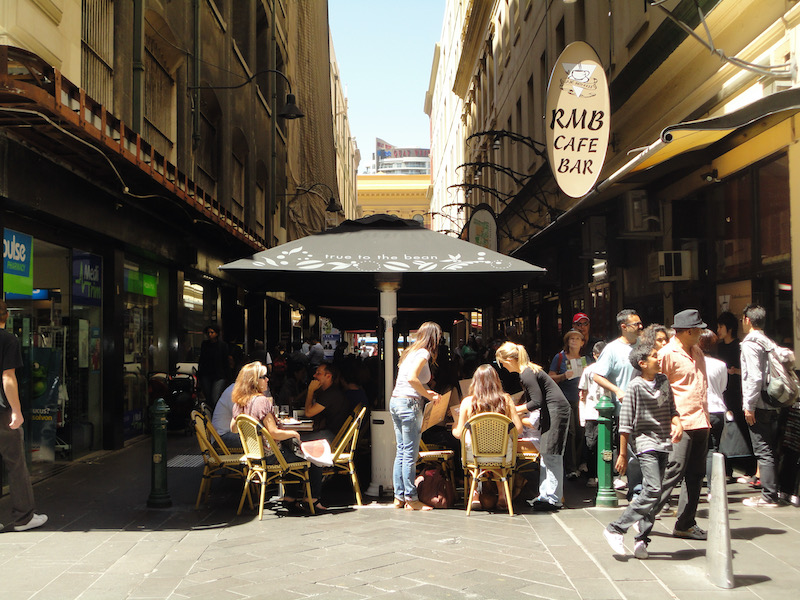 Leaving before the services commenced, and stepping back out onto the street you get a great view of Flinders Street Station. If you wanted a good picture, take it from the steps of the Church. Having spoken about 3 of the 4 corners of Flinders and Swanstson Streets its time to look at the last, yet largest corner, home to Federation Square. Unlike its name suggests, Federation Square has not been around since federation but instead is a much more recent development. Although it is definitely something to do, I’m not going to talk about it in this post, as I think its a better place to end the day, rather than begin it if you complete the full city circle tram loop. Having said that, if you are looking for things to do in Melbourne, the Tourist Information Centre is located in Federation Square (down the escalators in the building on the corner) and is able to provide you brochures on every tour and place to visit in the state (well most of them anyway).

But, before getting onto the tram and getting into episode 2, you will need to grab some breakfast or a coffee in Degraves Street. Melbourne is re-nound for its laneways, with anything worth seeing generally being tucked away out of sight in one. People sometimes visit and say there is nothing to do in Melbourne, which isn’t true. Melbourne just hides its best stuff in it’s lane ways, so you have to work to find it. Degraves St is one of these lane ways that you must visit. Just across Flinders street from the station you’ll find the narrow Degraves street, almost always in the shadows of its surrounding tall buildings, yet full of umbrellas and tables. On a weekday or weekend it’s full of people, coffee and food. Melbournians love good coffee, and even though I hate the stuff I can’t turn down a hot chocolate with 2 free cinnamon donuts from “The Fix”, which is towards the Flinders lane end of Degraves St. Once you get walking up Degraves St its easy to wander along Flinders Lane and one of many arcades or lane ways that run off it. If you want to follow the city circle tour, grab something to eat and drink then chuck a U-turn and head back towards Flinders street.

As you head back to Flinders Street, half way along Degraves street on your left there is a stairwell heading down to the subway entrance to Flinders Street. Wander down there and you’ll find a small hidden arcade right underneath the street with some shops and generally there are windows full of art on show. I personally didn’t get the “art” in the windows, but there were professionals taking heaps of photos so it must be worth a look. The main reason i think its worth a trip down here, is that its just another pocket of Melbourne thats hidden away from the general commotion of the city streets. The tiled walls take you back to the days when the station was opened and how it must have felt arriving into the city. I don’t know if its the titled walls, or the occasional waft of a distinctive smell, but sometimes it does feel like a long old fashioned bathroom, but hey, we call that character! You can get back up onto Flinders Street via the stairs and then its just a quick walk to the centre of the road tram stop to jump aboard the city circle tram for the free ride around Melbourne. This however, is the final stop for Episode 1. In the next episode we will head east towards some of Melbourne’s finest city gardens, our Parliament and the theatre district. Until then, think about where you’ll go from here?