Terminal: Virgin Australia Lounge, Canberra. For the first time I was actually using the lounge for the purpose it was built, to wait in before a flight. Being Easter Saturday the lounge was very quiet, as was most of Canberra, which was a great way to start what will be a full day of flying and lounge hopping. I’ve reviewed the lounge before, and you can read the full Canberra Virgin Australia review here. 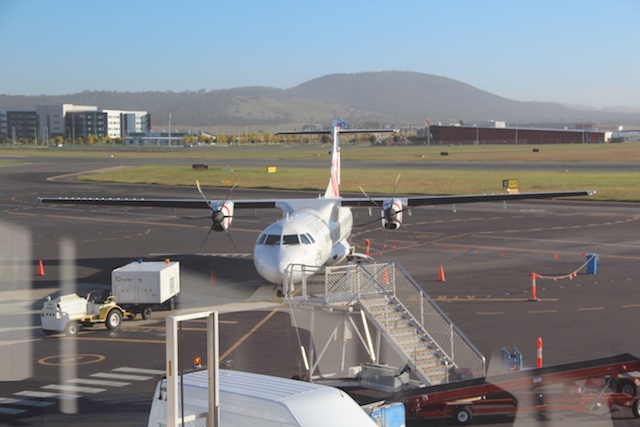 Departure: Boarding this beast was pretty easy although watching people instinctively walk to where door 1L would normally be only to find there is no door was pretty amusing. Unlike Qantas, Virgin know how to make a priority boarding line work and are the only to offer it at Canberra airport (although given the low numbers I probably didn’t need to use it anyway). Full hats off to the way that Virgin implement benefits to their premium and elite passengers (I cant say I’m loyal as I obtained my status via a Status match promotion, thus I use the term elite). 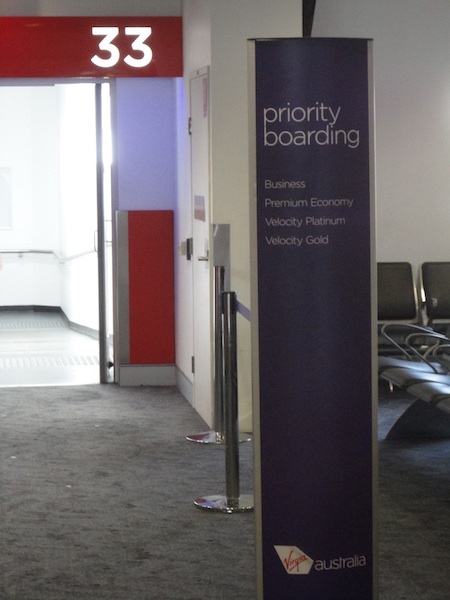 I was surprised by the noise levels on take off, which were much less than I had expected as we did a short roll before taking off very smoothly towards the north and pointing towards Sydney. The flight, like the dash 8’s that Qantas use pretty much follow the Federal and then Hume Hwy’s to Sydney and the lower cruise level provides a better view of what is going on below.

Seat: 16A. On arrival to the aircraft a copy of the weekend Australian is waiting in each pair of seats, a nice touch and saves using part of the preflight time with the newspaper run. My window seat in the second last row is essentially one of the preferred seats on the aircraft due to the rear entry and exit. The seats are dressed in leather and the legroom is pretty dam good for a prop, although the window has slightly less due to the curvature of the aircraft, however it’s not as noticeable as the Dash 8’s. 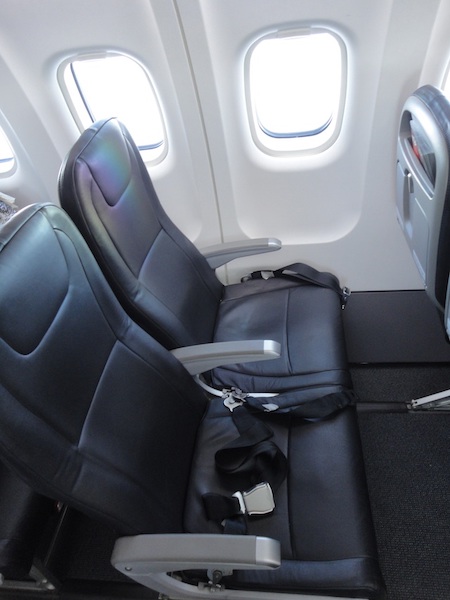 The magazine rack has moved to eye level making a lot more room at knee level, however the seat pocket has an interesting side entry design that doesn’t really allow much more than a wallet, boarding pass and phone. The angle and rigidity of the magazine rack means tablets like my iPad might be hard to get in (or more importantly – out). Overall the slimline seats with the raised magazine rack are a welcome design change, adding legroom where you need it without reducing the usability of the seat too much. 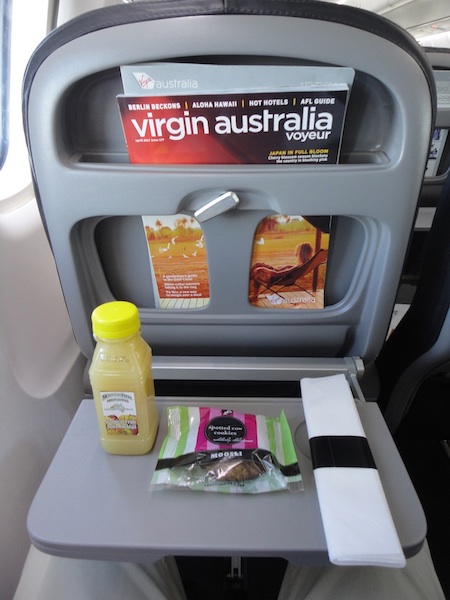 Aircraft:  ATR 72-500 (VH-FVL). The ATR is a relatively new addition to Australian skies, especially on mainline routes on the east coast. Virgin acquired these to be operated by Skywest airlines on shorter hops were the Embraer 170 just wasn’t performing well enough and you’ll mainly see them on the Canberra to Sydney route as well as Sydney to Port Macquarie. Although this was my first flight on these birds I did get a chance to check out a factory fresh example a few weeks earlier at the Canberra Airport open day.

Departing from the normal entry from door 1L, the ATR’s all board from the rear door, making seating at the back of the aircraft more desirable, as the cargo hold occupies the normal 1L door position. During the open day a makeshift front stairwell was setup at the front cargo door to allow a flow of guest through the aircraft but for normal operations all access is from the rear.

Inside it’s similar to any other prop regional plane, although as these aircraft still have the new plane smell and they feel a little more spacious but at the same time are cosy, clean and comfortable for short hops.

IFE: As a turboprop, there is no IFE available which is comparable to the QantasLink Dash8’s. Given the average sector length is only about 30-40mins of flying time there probably isn’t much need, especially as most people have a BYO iPod type device these days. Although I’m a big fan of in seat on demand IFE everywhere, even I can’t see a real need for it here – plus the added weight would probably take out a row of seats.

Meal: In a bid to get more public servants to choose to fly Virgin, on flights departing out of Canberra you generally will get a free snack on board (all other flights I think you still need to pay for snacks, depending on the fare class you purchased). On today’s flight we had a spotted cow “moosli” cookie, which was pretty good and a Mountain Fresh Tropical Fruit Juice to wash it down with. The tablecloth looks very similar to the Qantas “waste and recycle” bag. I think that providing free snack meals out of Canberra is a good marketing strategy, as its amazing how a few dollar meal factors into the decision to fly one airline or another on the short flights out of Canberra.

Arrival: I’m very used to arrivals into Sydney onto 34L/R or 16R however on this flight I had the unusual experience of landing on 25. If only I had of been sitting on the right hand side of the plane I would have been able to get a great view of the city and the harbor as we looped around the entire city before lining up and touching down toward the west. After landing we had to hold a few times during the taxi to let bigger birds pass us but we still made it to the gate on time.

This was my first time in the Virgin Terminal in a very long time, so I spent some time wandering around and checking out the lounge while I was there. I’ll post a full lounge review in due course but I must say it was a hive of activity and felt like a busy airport in comparison to Qantas Terminal 3. 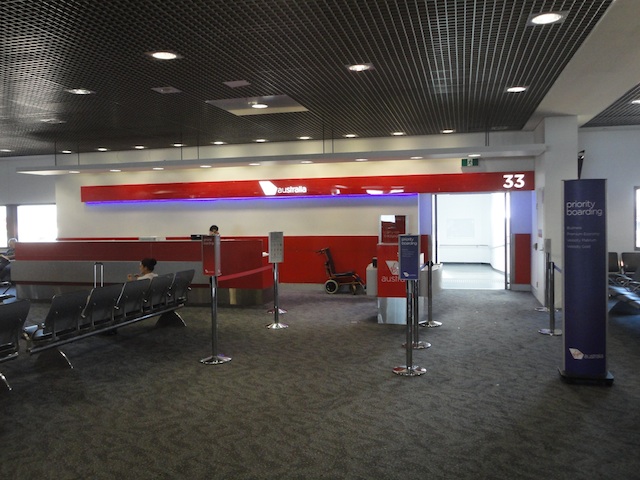 Crew: The two-member cabin crew was pretty great; friendly and enthusiastic which is pretty impressive, as I’d imagine the constant Canberra – Sydney back and forth all day every day without much variety could get a little boring. As far as the service goes, its fresh yet professional which is a great change from the last time I flew Virgin, where it was fresh yet somewhat casual. You can tell that Virgin is trying very hard to claw some of the important and lucrative business travel market, which appreciates professionalism over fun and games. I think the crew is working really well at assisting with this transition.

Overall: For the short hop from Canberra to Sydney the flight was comfortable, professional, on time and slightly exciting due to trying out a new aircraft type. I’ve always enjoyed the Dash 8 flights but must stay these new ATR’s feel a fair bit more comfortable than the Dash 8’s. Would I swap all my business to Virgin as a result of this flight? Probably not. Would I switch some? Yes, as long as I could also maintain my status on Qantas for the Oneworld benefits it provides overseas; a category I think many Qantas elite passengers would probably agree with.