Terminal: Check in is an interesting procedure, with everyone having to present to the United States Department of Agriculture and having their bags x-rayed before check in. There isn’t that much signage about this process, and it almost felt like it is the responsibility of the last person on the check in line to inform new comers to the line to have their bags scanned first. Once scanned, a green sticker is applied to each bag and I guess in theory if your bag doesn’t have the sticker it doesn’t get loaded onto the aircraft. Ironically the sticker from my visit over a year earlier was still attached to my bag, so with now 2 stickers I proceeded to the Delta check in queue.

Fortunately a priority line was in operation and I avoided the general economy queues and with a minute or two I had dropped my bag and was issued with my boarding pass. Although there is a priority security lane, there was literally no queue for security anyway so I just entered via the regular lane. Today at San Juan was probably one of the more efficient TSA operations I have come across so far. Although on previous visits, on a day a cruise ship finishes a cruise I can assure you that isn’t always the case.

Being a semi gateway to the Caribbean, I get the feeling that San Juan airport is purposely designed for the tourist market and thus lacks some of the more business creature comforts, like many lounges or coffee shops and is very much oriented on getting people in and out, perhaps after buying some duty free first. Once past security there isn’t a great deal to do, and in the concourse of my departure there wasn’t many shops to look at other than the Duty Free store.

Departure: Boarding was called on schedule with Business class passengers invited to board first. I suppose it has a lot to do with there being very little in the way of decent airline lounges in the USA, and the overhead storage bin race, but there always seems to be a mass of Business class passengers hovering around the front of the gate like they are about to run a 100m sprint just before boarding is called. Once called its like a starters pistol has been fired and everyone rushes to be the first to board. This flight was no exception although, caught up in the excitement I managed to get to my row of seats before the passenger beside me did allowing me to take a quick photo of the seats before the cabin quickly filled.

I found the Delta pre-flight service much more personal than I had on American with each passenger being asked what drink they would like (could be anything from the bar despite the early morning flight) and having each drink personally served. This not only allows for more options for drinks but is much more personal than waiting for everyone to board and walking a tray of juice and water down the aisle. The crew weren’t afraid to squeeze down the aisle while the remainder of the aircraft boarded either to ensure each business class guest was offered a drink as soon as they got settled into their seats. 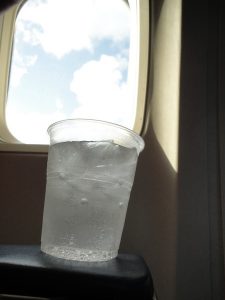 We appeared to push back pretty much on time, despite a few last minute gate checked baggage that realistically, would never have fitted onto the aircraft anyway. Although TSA security is already a convoluted process with everything you cant take on board, perhaps if they enforced a size limit at security, forcing people to check more bags schedule reliability would improve although I’m not sure how well Government enforced baggage sizes would be accepted in the land of the free.

Seat: 2A. On arrival into the seat each seat has a bottle of water, a pillow and a red Delta branded blanket for each passenger. Although on first glance the business class recliner didn’t look that appealing it actually was relatively comfortable although was in serious need of some form of headrest if you want to catch up on any sleep, although this didn’t stop me having quite a few short naps during the flight. When I disembarked the crew member commented that I had caught up on a bit of sleep during our flight today which suggests that the seats are comfortable enough after all. The tray table is stowed in the outer armrests and there is also a small cocktail table that comes in handy for those pre take off drinks. 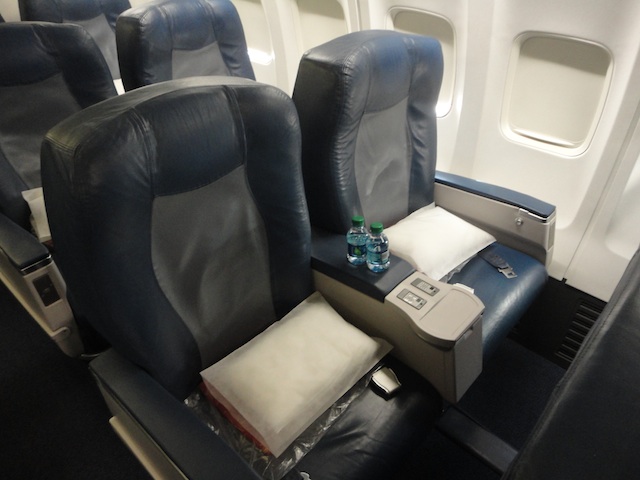 Aircraft: 737-800. The business cabin is set up in a 2-2 configuration with four rows of Business class up front with economy filling the remainder of the plane. There is a solid partition between the two cabins and a curtain for the aisle however like most flights, the curtain isn’t used during flight. The forward toilet is supposed to be reserved for business class passengers however I found that it was pretty much a free for all. This particular aircraft also didn’t look that new and wasn’t sporting a BSI although it appeared to be pretty clean and well kept. I guess the problem with getting used to flying on BSI aircraft is that when you don’t get one, you really notice the older style interiors. 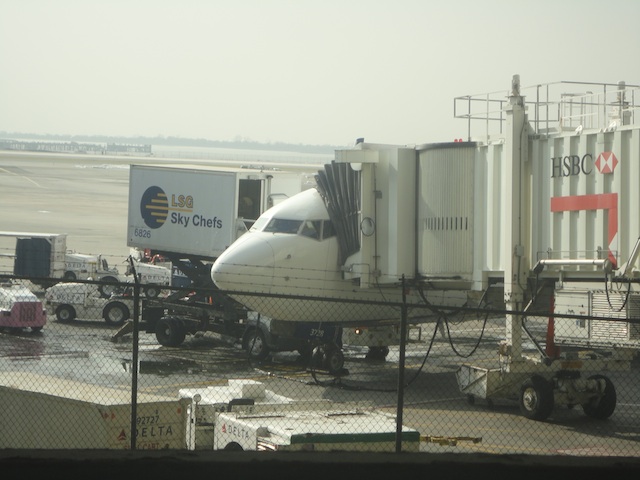 IFE: I honestly didn’t pay that much attention to the IFE provided which was simple overhead monitors. I do recall them announcing that a movie would be played however wasn’t really in the mood for whatever was showing so decided to catch up on a nap instead. WiFi was enabled on this aircraft so if you wanted to you could probably log on, although as our flight path was mainly over ocean I’m not sure how much connectivity you would have got, and thus didn’t try.

Meal: Breakfast was served shortly after take off with a choice of cereal or an egg omelette with potato, tomato, sausage and a side of fruit. Additionally hot muffins or croissants were also offered once the meal was served. Cereal on a plane is rather a boring choice (although if you are flying a lot and don’t want to end up moving into the gym on return, the cereal might be a good option). So if you haven’t already guessed I chose the hot option and despite having a rather upset stomach before boarding the flight the hot meal did help settle everything down and was pretty good. 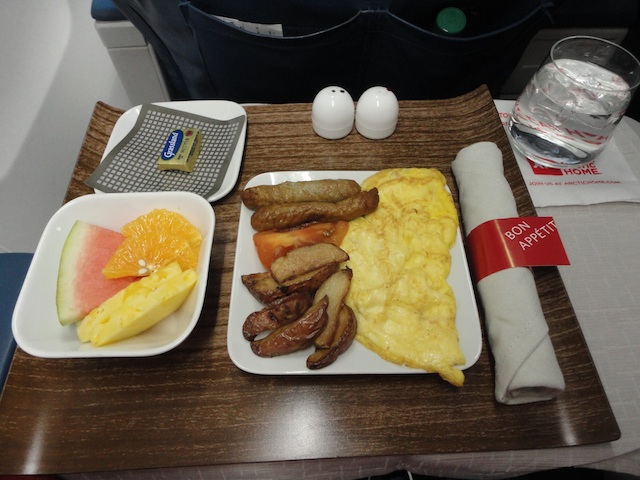 The tray the meal was served on was rather unique and worth a short mention as well. The wood look tray curved up on the sides and held neat individual rectangular planes and bowls. The cutlery was wrapped with “Bon Appetite” which although wasn’t anything special as something neater than being lopped on the side of the tray. Although separately none of the pieces were anything fancy when combined it was a little bit more classy than a simple tray and again not what I expected from North American airlines.

Arrival: New York airspace if obviously a rather crowed place to be as we gradually descended and circled over the ocean for what seemed like forever before crossing the coast and landing at New York’s JFK airport. Flights had only recently resumed after Winter Storm Athena forced the closure of many NYC airports that had only recently opened after Hurricane Sandy tore through the area about a week earlier. The news reports prior to departure sounded like the area would be a war zone however not being familiar with the area it was hard to tell if it was damage I was seeing out the window, snow or just what New York looks like from the air. I’ll post the video of the landing soon and you can see for yourself. Once on the ground we taxied around much of the airport before arriving at the Delta terminal – unfortunately my view was of the runway so didn’t really get to get much of a view of the airside operations of each terminal. 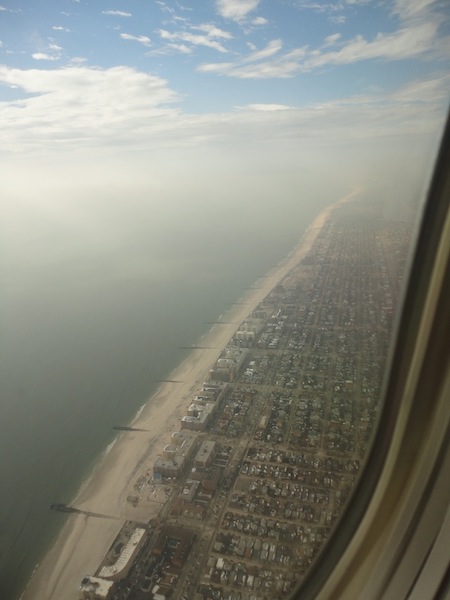 Once inside I made my way to baggage claim and was surprised that priority baggage actually worked, with my bag coming out quite quickly. The baggage claim area was quite small considering the size of the terminal, however I presume there are other carousels in other sections of the terminal that I didn’t visit. The area looked a little run down, however there were signs apologising as they were repairing damage from Sandy which is understandable although I get a feeling it wasn’t exactly palatial prior to the hurricane either – but hey it’s a baggage claim after all and not a 5 star resort. Overall the airport did have a strange 1990’s Seinfeld feel about it.

Crew: Despite my naps, I can tell you that the crew were great on this flight paying close attention to each passenger in a friendly and bubbly manner. I got the feeling that the crew were genuinely interested and willing to assist to try and make each passengers flight as comfortable was possible, which was a nice change when compared to a few other recent flights where the service was more efficient than comforting.

Overall: The duration of the flight allowed me to catch up on some much-needed sleep, which in reality shouldn’t be a reviewable component, but alas it did. The service by the crew was pretty good for North America and even for some short haul routes elsewhere and the personalised meal and pre flight service was well executed. The IFE was lacking however given my aim was to sleep the flight away it wasn’t really that much of an issue. I hadn’t flown Delta before and before taking this flight I hadn’t heard a great deal of positive reviews, however post the flight I’d probably consider them again when in North America.