Ok so last week I took this flight on a Tuesday, this week, it’s a Monday. So are there any differences between the Monday and Tuesday services? Well nothing significant, but here’s my review anyway.

Flight: QF958 (this is the second time in a week that I’ve been on this flight – thus you should also read my precious InFlight review as well).

Seat: 11B. I’ve been lucky these last few flights to always score an exit row. Thus I’m running out of things to say about them. If you haven’t checked out my reviews before and want a run down on the exit rows, then check out last weeks review (for the same flight). The only difference between row 11 and 12 is that 11 (like row 10) is locked before take off. This basically means you can’t recline until after the crew unlock your seat. Although this was a bit annoying as the crew forgot to unlock, the extra legroom makes up for it.

Aircraft: 737-400 (VH-TJF). Again this is the third flight on the same model aircraft in the last week (and I expect tomorrow’s will again be this model) so I’m running out of things to say. There’s nothing obviously different between these aircraft, and their presentation is pretty consistent so at least you know you’ll get a similar product if you get the 737-400 (which even if you don’t fly that much on Qantas you’re likely to land on one of these with 20 in the fleet. At 36.4m long each of these birds seats 150 at cruises at 830km/hr according to the inflight magazine. On this particular route / flight combo I’ve noticed that they operate pretty close, if not at capacity.

Terminal: Canberra’s new terminal is  a huge improvement and after visiting a few times I can’t believe they got away with that old terminal for so long. Having said that, if you fly Virgin or Tiger you do end up back in that old terminal very quickly. The billboards say that what you see isn’t all you get but I haven’t seen any big move to finishing off the terminal as yet. Apparently it is going to have international facilities, and hopefully international flights. If anyone wants to lend me a few million $ I’ll happily set up an international flight out of Canberra for you.

Departure: After pushing back a few minutes early, this afternoons flight took off on runway 34 to the north. Just after take off Black Mountain’s Telstra tower came into view with a great red sunset silhouetting the surrounding hills. We then climbed above some cold looking clouds as we made a few slight turns and pointed towards Brisbane. Today’s flight is expected to take 1hr 20mins, some 30 less than schedule which theoretically should put us in Brisbane a fair bit earlier. 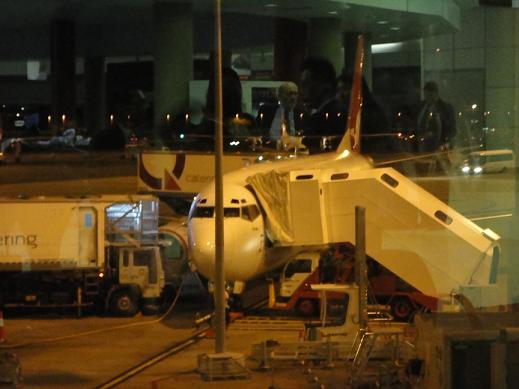 Inflight Entertainment: Tonight’s inflight entertainment was the news, a short episode about the Sydney gallery, followed by Modern Family (which is a definite win, even if I saw the same episode last week). If you fly regularly you will most likely see the same show a few times so if you want some selection, bring an iPad. For me Modern Family was enough to keep me entertained. Apparently if you put some salt in your hot chocolate it increase the flavour (at least according to modern family). 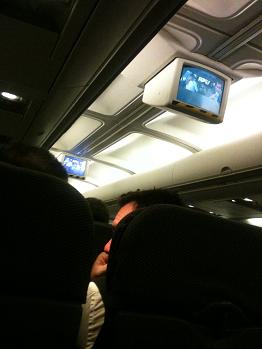 Meal: An early dinner was served tonight which consisted of a beef curry and rice, cracker barrel cheese and arnotts biscuits and of course the mini tolberone chocolate bar. As a cityflyer service there is complimentary beer and wine with each meal. Yep, another Heineken for me. This meal was much more filling than the pasta on last weeks flight and was a little bit better presented. All in all tho it’s a freebie meal in economy so probably the best you’ll find on such a relatively short flight. The person next to me questioned that there was no choice in meal, but for such a short flight it’s not really expected to have a choice. If you need a specialty meal, make sure you put in a special request when you make the booking. 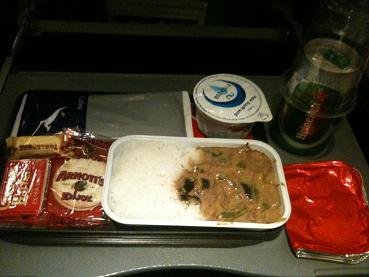 Crew: Very friendly crew members on tonight’s flight. Again it’s short so you can’t expect too much. They didn’t end up unlocking the recline until asked, but maybe I’m just getting picky now, as I can’t really fault them any other way. One thing though, if you are in the exit row, don’t be rude and read your magazine while they run over the safety drill for this row. It doesn’t take that long and ignoring the very friendly and accommodating crew member is just rude. Overall Daniel and the crew were attentive and friendly.

Arrival: We were well into the decent  when the crew prepared the cabin for landing today, which was definitely much earlier than scheduled. Still working out which way we landed, but the international terminal was on the left as we came in, so I think we landed to the north. We had to wait until a Dash-8 cleared out of the gate area before we pulled into Gate 16’s hard stand. Some passengers didn’t like the stairs and the short walk across the tarmac and up into the satellite building, but I always like getting out onto the tarmac (makes you feel special). It’s a bit of a walk to the exit, and a little further to the rental car but after an hour and a half sitting on your backside, the walk is nice to stretch the legs.

Overall: Well comparing this weeks QF958 to last week, this one wins.. Mainly because it departed on time and arrived early (as opposed to last weeks late arrival), it had 1.5 episodes of modern family and I prefer the beef curry than the pasta. Other than those factors, the service, aircraft and crew were pretty much the same. I’m looking forward to a flight in the future that’s not on a 737-400, but in the meantime I’ll just keep ticking off the rego’s.