Seat: 57A. This is a standard A380 window seat on the lower deck (note to get on the upper deck you’ll need a premium or business ticket). The curvature of the aircraft body makes the seat feel very spacious (especially as the middle seat is empty) however as others have noted it’s almost impossible to lean against the wall as it’s too far away. The windows look massive and from this seat you see how big the A380 wings are (seems to go on forever!). The armrest of the seat doesn’t go all the way up, but it can extend your thigh room if the seat is empty beside you. This is actually a little annoying when you recline as the armrest kinda sticks out awkwardly. The foot rest in economy is a little odd and takes some getting used to. It’s basically just a section of netting under the seat in front. I find its a little tight at the toes so prefer to just let my feet run free under the seat. Unless you have massively long arms you’ll need to stand to reach the air vent above, although fortunately the light control is in the seat control. There is plenty of overhead storage above. 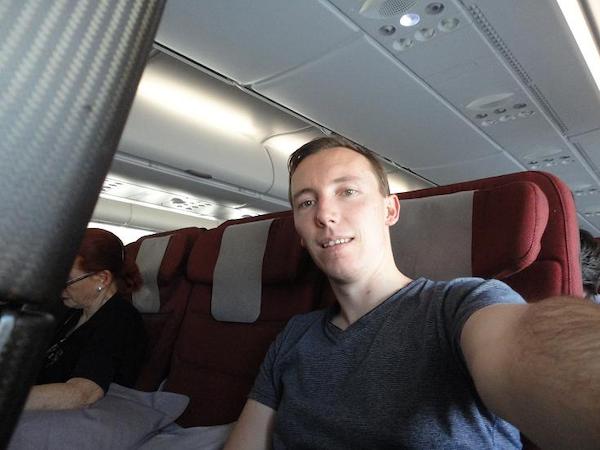 Aircraft: Airbus A380 (VH-OQC). The space, comfort and lack of noise that an A380 gives you is second to none. Before take off the pilot said that during take off we would notice how comfortable the A380 is and he’s not wrong. Its so quiet it’s amazing! The space available is quickly filled with economy seats in a 3-4-3 layout however at the very back of he bus there is a self service snack bar and some room to stretch the legs. There is a spiral staircase to the upper deck but alas I’m not in able to access this area. The A380 is definitely a remarkable aircraft and adds to the comfort provided on the service. 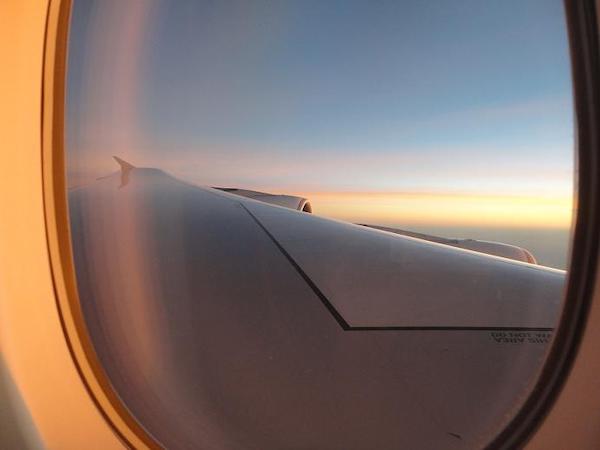 Terminal: Melbourne’s International Terminal has been undergoing some significant redevelopment over the past few years. The new outwards duty free store is huge when compared to it’s predecessor. I’m sure departing tourists love it, but I never see the point of buying duty free at the start of a holiday so pretty much headed directly for the lounge (separate review to follow). The new concourse is pretty spacious and lacks any shopping outlets, so if you want to get away from the masses, head down there and watch the planes come and go.

Departure: We taxied down to the end of runway 16 and took off to the south before turning right and pointing towards Adelaide, Ayers Rock and Singapore. The video of the take off is shown below (taken off the SkyCam). The climb was smooth and again demonstrates the added comfort and style this big bird provides. Unfortunately the rest of the flight was cloudy, so any view of the vastness of Australia was blocked. I must note this route really shows how big the country is as you watch the moving map for hours and still find yourself above Australia.

Inflight Entertainment: The IFE available on the A380 is the best offering that Qantas provides on any of it’s fleet. There are heaps of new release movies (plus some classics) a wide selection of TV shows, documentaries and news as well as a range of CD’s and the Qantas Radio. There is also the moving map which rather accurately tells you where you’re up to (and how long you have to go) as well as the Skycam that provides a great view from the tail mounted camera (see the take off video below). The video below is the pre flight safety video shown on the A380.

Meal: The main meal had a choice of either slow braised lamb in a tomato and anchovy sauce with spring onion potato puree or steamed fish in a mild kaksa broth with fragrant rice. Not being a fish guy, I opted for the lamb. Both dishes came with a carrot and celery salad (blood orange balsamic dressing wasn’t the best) some cheese and biscuits and a lindor chocolate ball. There were a selection of wines available, as well as beers and spirits. I opted for some sparkling (after already having a few in the lounge).  Shortly after the meal tea, coffee, hot chocolate and peppermint tea were offered (hot chocolate a win) followed by a mango ice cream bar.

During the flight water, juice and fresh fruit were served before a supper type meal was served before landing into Singapore. This meal was basically a toasted sandwich (although called Grilled Vegetables and horseradish Cheese Melt on a Toasted Panini) accompanied by a seasonal melon salad and some juice. There was another lindor chocolate ball as well. Both meals were more than satisfactory, and the portion sizes were pretty good (I wasn’t hungry after each meal – although if you are, there are heaps of yummy choc chip cookies at the self service snack bars). 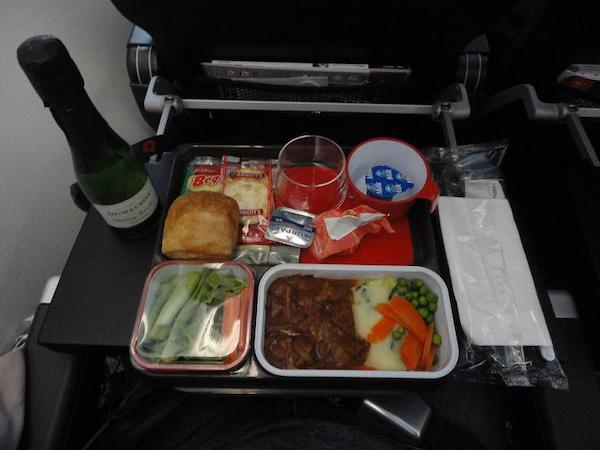 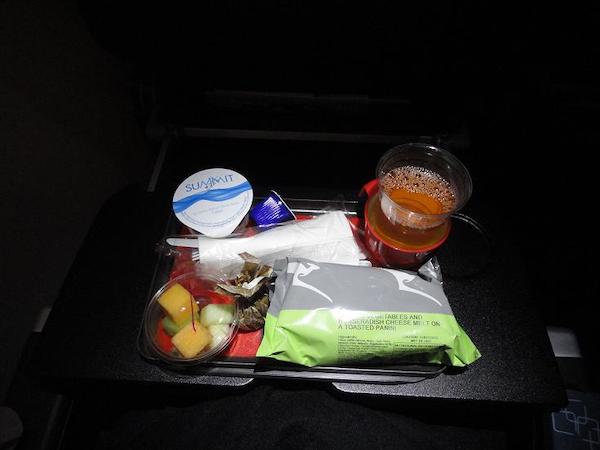 Crew: While chatting away to the lady sitting in my row before take off we discussed what can either make or break a flight. We agreed that regardless of how good the plane and entertainment were, it was the crew that made, or break it. Unfortunately on this flight the crew seemed rather disinterested,  a little disorganised and somewhat frustrated with each other. This vibe didn’t go over well and thus there was no real warmth or friendly service from any of the crew, which was a shame considering the aircraft and entertainment ticked all the right boxes, leaving the crew to lower the overall enjoyment of the flight. Perhaps given I’d just come off the excellent personalised service provided on a dash 8 I was judging them a little harder, but its not that hard to be friendly.

Arrival: We arrived into Singapore about 10mins early after making a few turns around Singapore on decent (the pilot said it would be a great view, but when its dark and all you see is lights its a little hard to make out what’s what other than the container ships). Being in the front section of economy really pays off here as once first class leave, you’re next off (if you’re down the back, expect a little delay). I’ll add a separate review of Singapore Airport Terminal 1 later, as its worthy of it’s own review, however all I’ll say is that its massive and awesome.

Overall: The flight was smooth, on time, on a great aircraft with excellent entertainment. The only thing lacking was some enthusiasm, warmth and some organisation from the cabin crew for it to be a perfect flight. Unfortunately with that missing I wouldn’t say that the journey was enjoyable, rather it was efficient (e.g. it got me from A to B safely and relatively comfortably). Hopefully on the return flight I’ll get a more vibrant crew so, using Qantas talk, I can “Enjoy the Journey”.