I know it was only yesterday that I put up an “InFight” post, but anyone who knows me knows that planes are my thing, and any opportunity I get to fly on, photograph or talk (in this case write) about them I will. Anyway, enjoy. Next week I’m doing 5 flights so expect some more rapid fire InFlight reviews over the next week 😀

Seat: 12B. It’s been a while since I’ve sat in a middle seat on a 737 and to my surprise it’s not that uncomfortable. Of course I should note that rows 11 and 12 are the exit rows so plenty of legroom to be had. Unlike the last flight there is no big guy in the middle so there is plenty of room at shoulder level today. Also the middle and aisle seats have regular padding (unlike the window seats which are about an inch lower) which makes this middle seat more comfortable. I reclined fully today (something I normally don’t do) and there is a decent recline and serious amount of legroom for economy in the exit rows. To get these rows either get to the airport early, or if you are a Gold or Platinum frequent flyer, select your seat online when you make your booking. You can’t put your bag under the seat in front, so are limited to the overhead bins, but I never do that anyway so for me it’s worth the sacrifice.

Aircraft: 737-400 (VH-TJS) arrived into Brisbane after operating from Sydney and has a variable cabin with flexible business class (today only 4 rows) before economy starts. To be honest this aircraft looks a bit cleaner on the inside compared to my last flight on this model, but all in all it’s the same as it’s sister aircraft. You’ll find 6 abreast cloth seats an adjustable headrest wings in economy with 2 over wing exit rows. Business is 4 abreast however as it’s a flexible configuration don’t expect that much wider seat or legroom (the middle seat consists of an armrest / cocktail table). 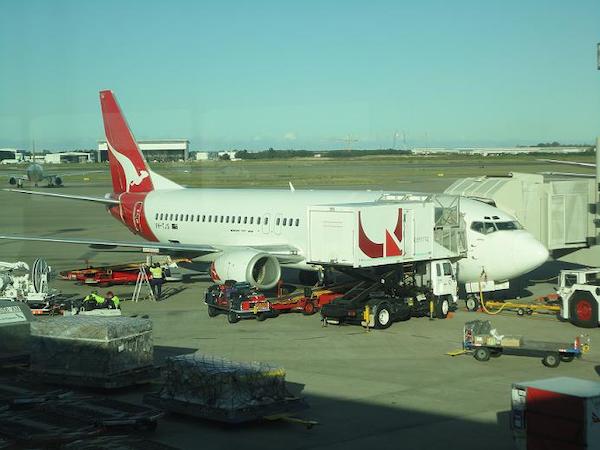 Terminal: Next Generation check in is available at Brisbane, however as we arrived about 6 hours before our flight, we headed directly for the Qantas Club for check in. Due to a limited direct schedule between Brisbane and Canberra it was still a 3 hour wait for the next flight (I requested a connection via Sydney, but that would only save 10mins so decided to sit it out in the lounge.) Brisbane’s Qantas Club lounge has been very crowded every time I’ve visited here (similar to Sydney and Melbourne) which means it’s yet to leave a relaxing impression. The food and beverage offerings are the same as every other lounge (perhaps being Queensland a pineapple or something could be added to the menu for a local touch?). The lounge is smaller than Syd or Melb, and with the computer sections smack in the middle it feels a little odd. Personally I’m not a fan of the size/layout as it just feels busy and very loud, but that could be personal preference. It’s location is handy as it’s close to the main area of the terminal and to the satellite arm.

Departure: I noticed that during the boarding call at the gate that Business passengers as well as Gold and Platinum frequent flyers were given the option to skip the queue. I don’t fit any of those categories, but hadn’t heard that announcement before,  although I didn’t notice anyone taking up the invite anyway. Once on board we pushed back from gate 22 about 4mins behind schedule however the pilot advised that our flight time will only be 1hr 25mins today (about 25mins faster than schedule). We took off to the south with a quick left turn before climbing out over Moreton Bay. Very smooth take off as the Gold coast came into view out the left hand side of the aircraft. A few bumbs of turbulence just as the food was coming out, and then the seat belt light went on just as they took the meals away (why the seatbelt sign always get turned on after the turbulence has finished always makes me think it’s a bit like closing the gate after the horse has bolted, better safe than sorry I guess). There was some high cloud which probably assisted with creating some bumpy weather. It was a little bumpier than normal today but nothing so dramatic to write home about (hmm, maybe I am writing home with this review).

Inflight Entertainment: As expected on this type of aircraft the inflight entertainment is just the over aisle CRT monitors, the radio channels and the Qantas Inflight magazine “Australian Way” which is a new magazine today (Being June 1, whoa – June already). Again I was lucky as the dials for both channel and volume work fine. In the few minutes before departure I charged my iPod (which is my preferred entertainment, hoping the battery will hold out for at least part of the flight however found I didn’t really need it too much). On today’s flight we had the news, Mythbusters, Man vs Wild (the same episode as yesterday) and Modern Family. The Modern Family episode really saved the overall IFE rating for the flight, however we missed the end as we came into Canberra (why cant there be a delay when you want it!).

Meal: Just a snack served today in the main cabin which consists of the  brand gourmet caramelized onion crackers and antipasto dip, some pretzels and a heineken (CityFlyer flight so complimentary beer and wine). The ‘gourmet’ crackers were quite dry and powdery (although the sauce was nice). Given it’s only late afternoon it’s an ok serving size, however the cookies I’ve had on other flights are nicer. 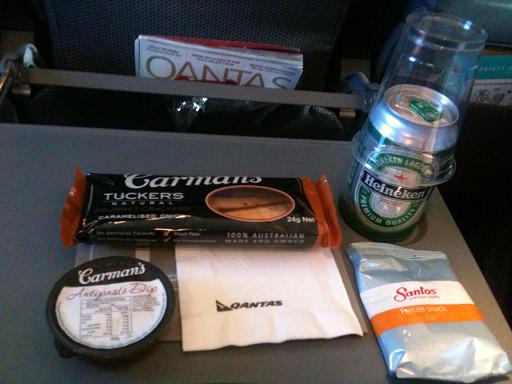 Crew: Given it was only a short flight and limited meal service the interaction with the crew was minimal however they were all friendly and polite (Actually this crew were alot warmer than the Qantas average). Is it wrong to say that the flight attendant was cute? Well the guy was, if it is wrong to say, too late cause I just did.

Arrival: At top of decent the pilot advised that we would likely be landing about 5 mins earlier than schedule (guess we didn’t make up all than time after all, but considering we left late, it’s not a bad result). Light easterly winds, a few clouds and a temperature of 13 (pretty warm for Canberra) will be our somewhat welcoming winter weather. In the end we taxiied smoothly into gate 12 right on schedule.

Overall: Today’s flight was pretty standard really and what I’m growing used to on short domestic hops. The only room or improvement is really the snack choice and the IFE. Although IFE is really a Qantas domestic fleet wide issue so can’t blame it on his one flight.