Seat: 3A. As there is only 1 class on the dash 8, all the seats are pretty much the same. Row 1 is the exception where seats F and E face backwards. The centre arm rest retracts fully which is great when the seat next to you is vacant (as it is in my case).

Aircraft: Dash 8-300 (VH-SCE). I’m a personal fan of the dash 8 series aircraft, although I know many people don’t like seeing the propellers spin around. I however love the small 2 by 2 all economy cabin that feels offers plenty of legroom in every row. The prop noise is definitely noticeable, so if you have a hangover this bird wouldn’t be for you. Still there is adjustable air vents in each seat as well as your own reading lights and a mini tray table. There is a compact toilet at the front of the plane, so although this is a prop plane, its no four sestet trainer. Other than that the aircraft feels comfortable throughout. The airspeed on the dash 8-300 is a little slower than the 400 series and jets, so it will take a little longer to get to where you’re going however as they cruise at a lower level you get to cruise speed faster, thus saving some time on short hops. 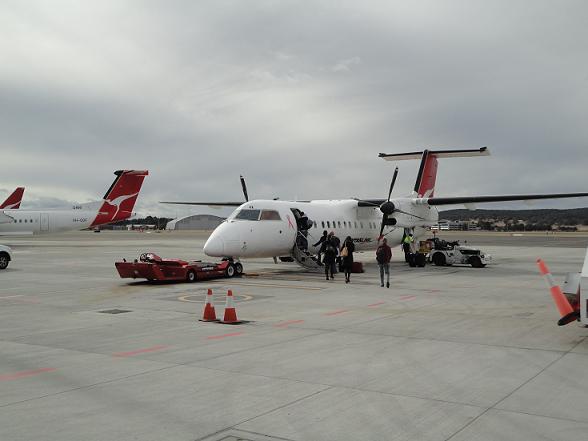 Terminal: Check out any of my other recent reviews for the run down on Canberra Airport.

Departure: Spot on time for departure out of gate 14. We took off towards the north before circling around Canberra and then climbing up over the snow dusted hills towards Melbourne. One of the best features of the dash 8’s is the quick take off and faster turns which often (like in today’s case) provide great views. The view across Canberra CBD was awesome and provided for some great photo ops.

InFlight Entertainment: There is no audio or visual inflight on the dash 8’s so the Australian Way and Spirit magazines are all there is to do. If you need something you can always bring an iPod with you. Ironically the background music while boarding was “taking off on a jet plane” which the cabin crew found very ironic and amusing.

Meal: As it was morning tea time we were served a snack pack which consisted of a choc brownie, deluxe nibble mix, some mints and a water. Tea and Coffee was provided (however as I drink neither I got a fresh glass of OJ). As always with the dash 8’s the crew offer mints after the meal (mentos this time) which adds to the personal service. 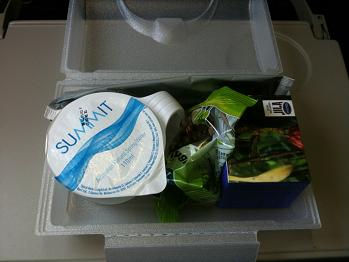 Crew: The best asset to the dash 8 is it’s crew. I have to say that the crew on this (and most other dash 8 flights I’ve taken) are by far friendlier and provide a much more personal service than mainline Qantas. The crew pass up and down the aisle several times and clean up when you are finished. I even got a top up of juice. If Qantas were able to replicate the QantasLink service and hospitality across all it’s flights it would be a much more popular choice.

Arrival: The captain (who may have had a few too many coffees by the speed he spoke at) advised that we were above Eildon and making our decent for an early arrival into Melbourne before landing towards the south (I got a view over our house as we came in which was nice). Gate 30 is at the end of the newer concourse however its not much of a walk across to the international terminal for my connecting flight to Singapore.

Overall: Overall a great, friendly and pretty smooth service down to Melbourne. Today is the start of my trip to Malaysia for the weekend so will be moving from the smallest aircraft in the Qantas fleet to the largest so it will be interesting to compare the two reviews. Anyway, as I post this review I’m comfortably sipping away on my glass of bubbly in the business lounge, which is much more relaxing than the domestic lounge (and has a slightly better food and beverage offering). The next post will probably come from Malaysia as I have a relatively tight connection in Singapore. Till then, Enjoy. 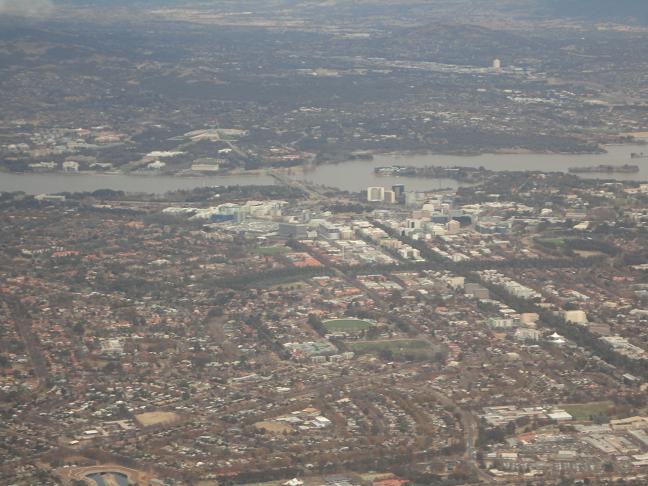