Terminal: After arriving into Canberra airport at about 11:30 the night before it felt a little davaju arriving back this morning to check in for my flights to Seattle, the long way around. None the less the queue at check in was virtually none existent so before I knew it my pack was checked and I had my three boarding passes, immigration form and express pass all neatly collated within the transfer folder. This first flight was just my connection to my mega flight to Dallas and then on to Seattle, so I’m hoping my bag makes it all the way with me. 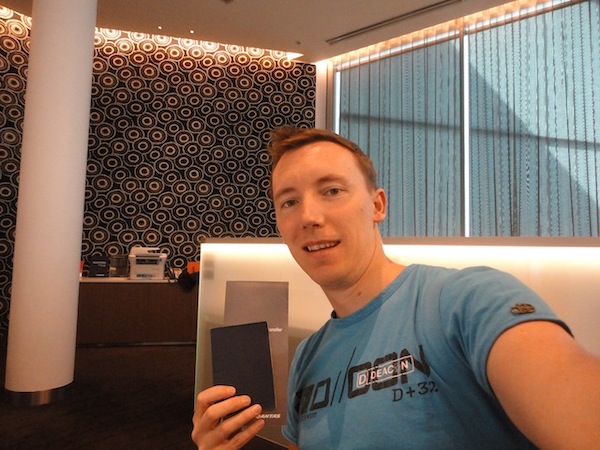 As Canberra is my home port I’ve reviewed it many times, as usual post security I made a bee line to the business lounge for some breakfast. You can read the full report on the Business lounge here. I was surprised to find that, despite flying this route countless times I don’t think I’ve ever put pen to paper and posted a review of it on Qantas metal. You can however compare my review of the Virgin service here.

Departure: I was busy trying to upload a clip to YouTube so was a little rushed once boarding was called with the standard “first and final call” so I made my way down to gate 14 for a short walk across the tarmac and onto the awaiting Dash 8. Although the dash 8’s aren’t popular to everyone, I really like the priority cabin baggage service provided at the steps the plane. Any bags that are a little too big to fit in the overhead bins can be tagged at the stairs and carried in the hold. On arrival the bags are quickly delivered to the foot of the aircraft ready to go, and it’s pretty interesting to see the size of some of the bags people use the priority service for – I doubt they would fit in the overhead of a 737 sometimes! 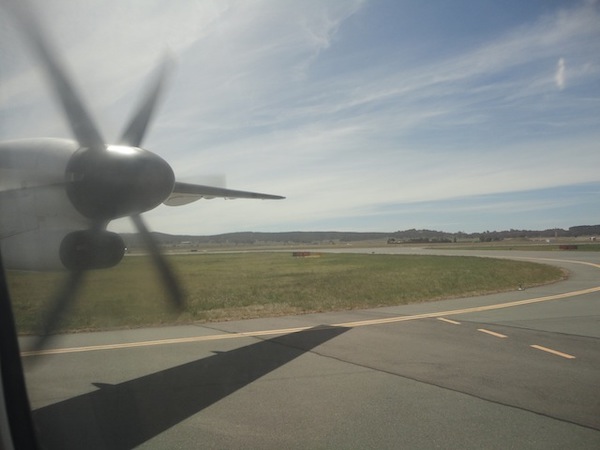 Seat: 2A. Each time I fly on the dash 8’s I always forget to select an aisle seat and my profile preference kicks in, assigning me a window. Due to the curve of the aircraft the window seats have less legroom thus the aisle is preferable, although you lose the closer than jet views that the dash’s provide from their lower cruising altitude. The seats aren’t bad for short hops around but don’t expect any fancy features, like reclining. The 2-2 configuration means you’ll only ever be sitting next to one other person however most flights don’t go out full so you’ll often have two seats to yourself. 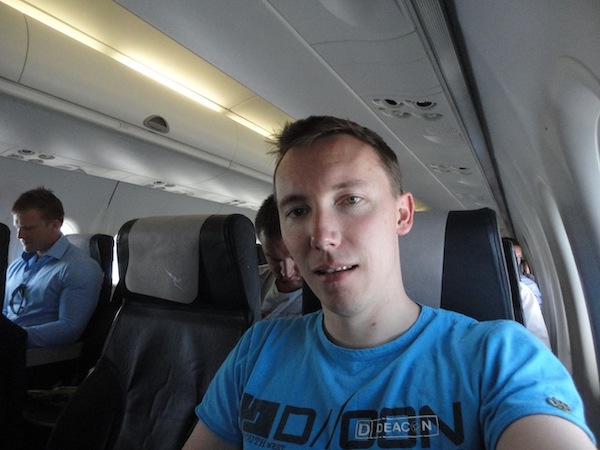 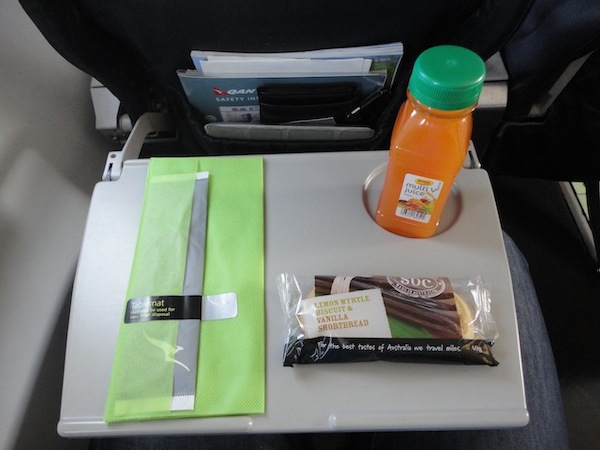 Aircraft: Dash 8-400Q . I’ve reviewed these birds before, but as a recap, these are single aisle twin turboprop aircraft that operate under the QantasLink brand mainly on short hops around the east coast and are a common sight in the Sydney-Canberra route. A lot of people don’t like these “little planes” but they aren’t that little really as they seat about 74 people and as they fly lower than jets have similar sector times to the jets on the shorter routes they fly. Yes they are loud, but the Q models are fitted with notice canceling systems that are designed to counteract some of the noise (this is noticeable between the 300 series and the 400Q’s). I like the views that the lower cruise altitude provides.

IFE: Short and simple, the IFE is whatever you bring on board as the aircraft is fitted with none. If you do bring stuff on board, don’t expect to be able to use it much. In a 30min flight, the first 5-10 is the climb and the last 10-15 is the decent – both times are when you can’t use electronics which doesn’t leave you much time to do much electronically.

Meal:  Despite this short flight you are served a snack which is enough to fill the gap between breakfast and lunch. Today’s snack consisted of a lovely Lemon myrtle biscuit and piece of shortbread accompanied with tea, coffee or juice. For such a short flight it’s all you need, but it is good to get something, even on short flights, even if like me, your next stop is the first lounge and it’s lovely menu. 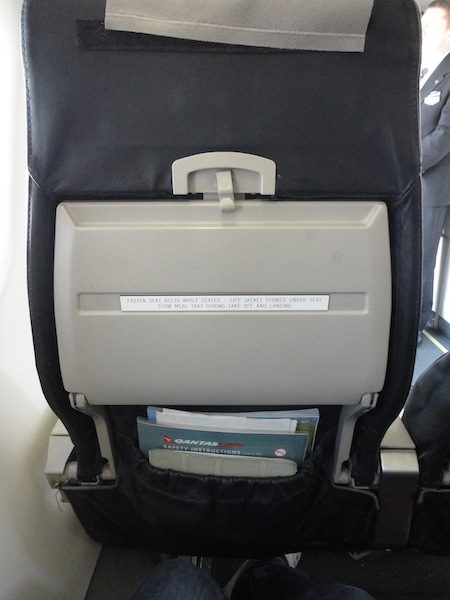 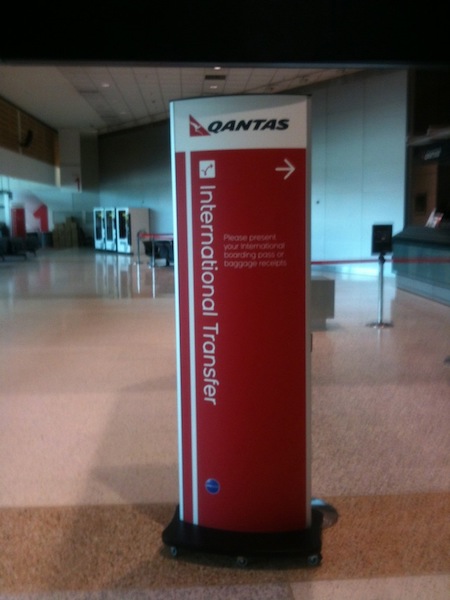 Arrival: We did the pretty standard approach into Sydney, making a few turns to get parallel’ish to the runways after passing Bankstown before heading out the pacific and before turning around, flying over the oil/fuel storage refineries and then landing towards the north on the left hand runway. Its actually a pretty city to fly into, especially if you have a fly over of the city on approach.Even over the water the different shades of blue waters of botany bay can be pretty, before landing on the runways that stick out into Botany bay, where a few centuries ago Captain Cook also landed in Australia. A short taxi finished off an uneventful flight before coming to a quick stop around gate 16.

As I was transferring to an international flight I was able to use the free Qantas shuttle which departs from the transfer lounge opposite Gate 1. This is a handy feature and provides great airside views as you drive around the northern end of the airport and across to the International terminal. If you are connecting to a non Qantas flight you need to exit the terminal and make your own way across. I’d recommend the $5 terminal transfer using the airport rail link which is accessible via an escalator beneath baggage claim.

Here is a quick video of the approach into Sydney. Notice the line up of international departures includes a Qantas 747, Delta 777 and a China Southern A330.

Crew: Two crew operate in this aircraft who are both professional but similar to the crew I had in Virgin a few days earlier – efficient and effective but not that personable. I normally find the crew on the dash 8 flights much more interactive and have a little character/passion however today’s crew were very mainline which was a little disappointing.

Overall: There probably isn’t a need for an overall summary on such a short flight, especially given the review took longer to write (and for some maybe read) than the flight itself. Thus I’ll finish up by saying the flight and crew did the job well of getting me into the first lounge on time and ready for my connection to Dallas.