Seat: 11A. The seats found on the A321 are very similar to those on the A330 with the slight exception of the foot rest folding down from the seat in front of you, rather than coming out of your own seat. As I’m somewhat vertically challenged (as my partner says anyway) my feet only just reached the fold down footrest and thus I didn’t find it that comfortable to use. If you were taller, it might be handy. The seats recline is pretty decent and its width means I could cross my legs over the seat and get comfortable just like a recliner in your lounge room. Not that my legs need it but the pitch was excellent with about 3 windows in view when reclined – plenty of room for a 2 hour flight. The seats are covered in the same blue fabric as found on the DragonAir A330 although someone in this cabin the style doesn’t look anywhere near as dated as it did on the A330. 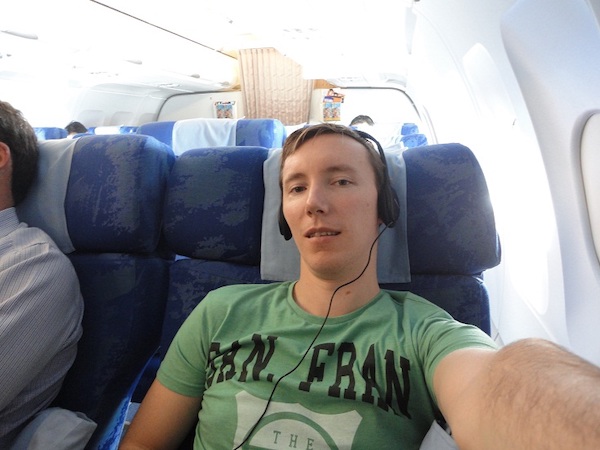 Aircraft: A321 (B-HTI). This was my first time on an A321, which was a nice change to the usual 737-400’s that I fly around Australia on. The A321 is a narrow body single isle aircraft – a stretched version of the A320. The internal layout of the aircraft has business class at the front separated by a galley from the economy section behind. The setup works really well and despite being just narrow body aircraft the interior feels very spacious with the 2-2 business class seating configuration. The stretch also means you are a little bit further away from the engines than on an A320 which reduces the noise in the forward cabin. This aircraft was particularly clean on the inside and had a cosy comforting feel about it. 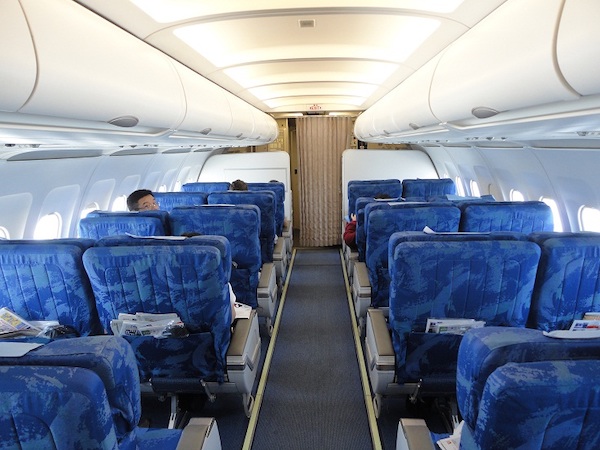 Terminal: On arrival at Wuhan International Airport you actually clear Customs before you check your bags in. In a similar fashion to arrivals there are channels for declaring and not declaring, on the other side of which is the airline check in area where we presented to the Business counter. Our bags were checked through to Sydney via Hong Kong and we were issued with boarding passes all the way before being escorted by airline staff through immigration and security and then into the Wuhan Business and First Class lounge. The lounge was comfortable albeit only slightly larger than some of the lounge rooms I’ve seen in some new display homes with 2 banks of 4 seats down the centre and a few around the walls. There was a drinks fridge with juices and soft drinks as well as some packets of snacks on one wall and a bookcase with magazines to read at the other end. Although small it opens directly onto the main terminal area and the gates are just across the general seating area from the lounge area. 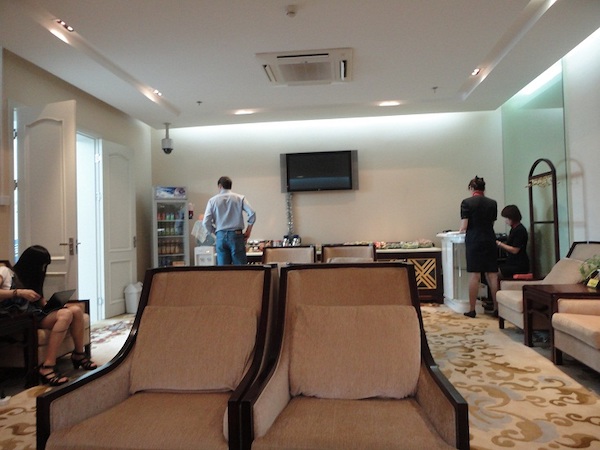 Departure: The first boarding call for our flight was made although after attempting to join the queue lounge staff advised that they would let us know when Business class would be boarding. As there are no aerobridges at the international terminal buses shuttle passengers the 100m or so between the terminal and the aircraft. Economy passengers board via large buses like the one that we arrived on, however this time business class passengers had a private VIP mini bus to take us to the aircraft. After allowing the first set of economy passengers to board once the aircraft stairs were free we boarding the mini bus and zoomed across to the aircraft to board without waiting for economy. After we were all settled in our seats with a glass of juice, the remaining economy passengers were permitted to board. The exclusivity shown to the business class was a nice touch.

Our departure was delayed slightly after one of the passengers attempted to bring a huge case on as carry on baggage. After about 10 minutes of discussion the bag was finally checked into the hold and the stairs pushed back (not without this poor airline guy having to run to and from the terminal a couple of times – ending up covered in sweat – poor guy). We pushed back from the remote stand and after a very short taxi were departed Wuhan with a very smooth climb into the smog before turning around and heading towards Hong Kong.

IFE: LCD TV screens fold down from the overhead bins shortly after take off and the entertainment program began. I cant remember what the first program was as I was busy with the meal but the second program was Modern Family – best on aircraft TV viewing! Unfortunately that only lasted 20mins before a Chinese news/IT show came on so I decided to try out the radio channels which had several English only channels including an 80’s channel and a new music channel which I ended up switching between during the remainder of the flight. Although its not seat back IFE, it was pretty good for a short flight. 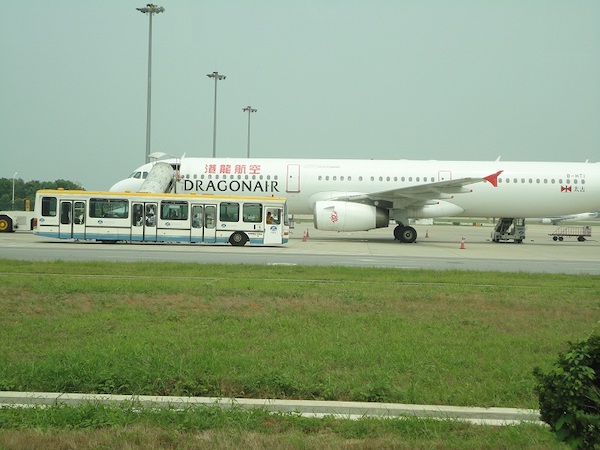 Meal: The meal service began shortly after take off which on today’s flight was lunch with a smoked salmon with apple and celery salad as the starter followed by a choice of either Sauteed Chicken with Mung Beans served on Steamed Rice and Vegetables or Braised Beef with BBQ Cream Sauce with Farfalle Pasta and Mediterranean Vegetables. I went with the beef and pasta option with some garlic bread which was really a nice lunch followed with the Apricot Strudel with Vanilla sauce as a desert. The food was nice, although the small dishes looked very similar in size and content to the aluminium foil tins that generally get served in economy. Perhaps if plated differently it would look more appealing; although it tasted pretty good so I guess we win on that front. 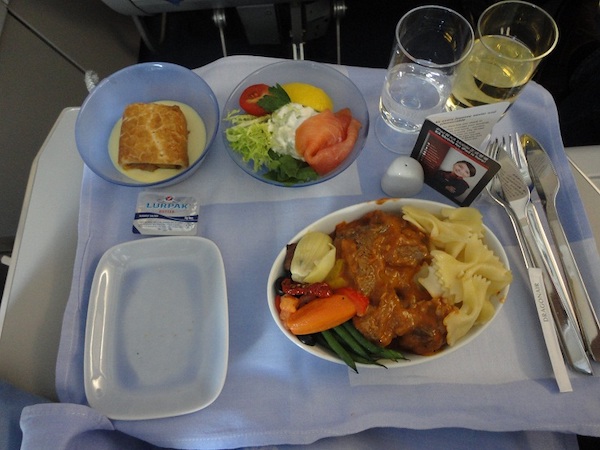 Crew: The crew were extremely attentive, addressing us by name and quickly clearing the tables after the meal service. I only had the one champagne this time round but as soon as that glass was empty the crew were at the ready to refill me if it was needed. The crew were kept busy prior to take off and again when coming into land as the number of passengers that didn’t seem to comprehend – Seat belts on, Seats upright, Window Shades open was pretty amazing. Despite the seemingly constant reminding of some passengers the crew remained very professional (unlike a previous Qantas flight were one of the crew basically started yelling at people to put their seats upright).

Arrival: Prior to take off the captain (another Australian crew) advised that he expected a smooth cruise during the flight, however some turbulence due to weather during the decent into Hong Kong. The turbulence never really eventuated however we were put in a holding pattern for about 45mins south of Hong Kong due to weather and airport congestion. As we came out of the holding pattern and began our decent I caught a glimpse of a China Southern aircraft climbing underneath us as we decended. I’m sure the separation was there but it seemed pretty close as it zoomed beneath us. The cloudy weather around Hong Kong seemed to clear some of the smog haze so I got a few glimpses of Hong Kong between the clouds during the final approach and landing which was much better than the view a week or so earlier.

On the ground we pulled up to another remote stand although this time there was no VIP bus for us so we crammed into the standard bus for the 5min drive around the terminal to the arrivals area. Although the bus is annoying if you just want to get into the terminal, I don’t mind it as you get a ground level view of the terminal and get to drive around so many different planes. On arrival we re-cleared security and then made our way to the Cathay Pacific “The Cabin” lounge to wait about 5hours for our onward connection to Sydney.

Overall: Despite the delayed departure and holding over Hong Kong the flight was great. The service by the crew was great, food was tasty and seats comfortable. If you had a tighter connection in Hong Kong you would have been annoyed, but with our 6 hour wait (which was reduced to 5 by the delay) it was probably more enjoyable to be delayed in the air than waiting in the lounge. This was my second DragonAir flight and their service is very similar to their parent company, Cathay Pacific, which makes them a great choice for regional flights from Hong Kong. 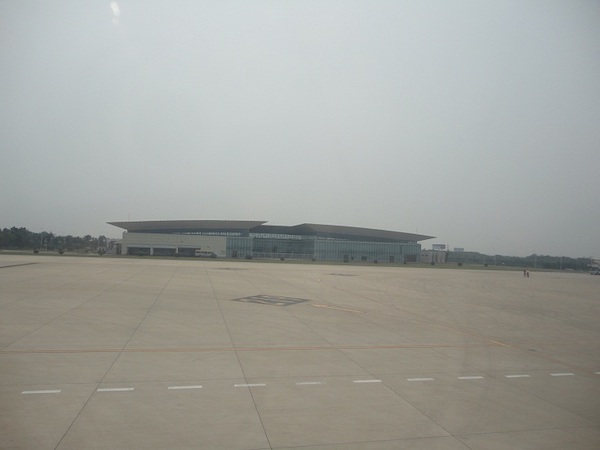