Seat: 11A. This seat is an older fashioned recliner seat. Although it looks a little basic when compared to long haul business class, its surprisingly comfortable for a short haul flight. Each blue business class seat has a great amount of legroom, decent recline and an extendable footrest. When reclined it feels like you are sitting in a recliner at home. If I had of taken the offer of a blanket I would probably have fallen asleep pretty easily, although the footrest doesn’t seem to go all the way to your feet and thus feels a little awkward if you use it on its own. The tray table for the meal service folds out of the armrest and is complemented by a central cocktail table between the two seats. Row 11 is the second row of a short business class cabin of only 3 rows, making it feel quite private. 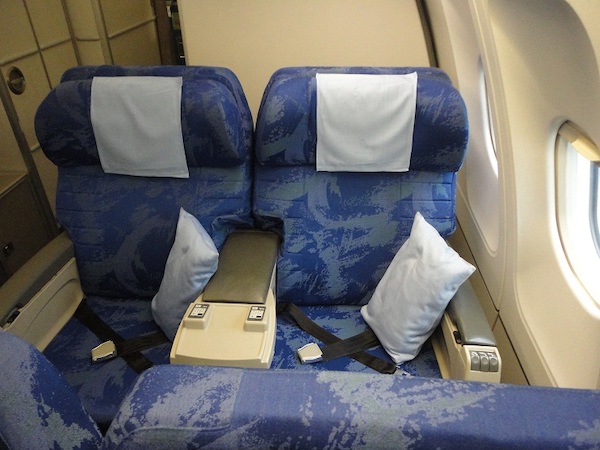 Aircraft: A330-300 (B-HYJ). The wide body aircraft makes it feel very spacious within the aircraft’s 2-2-2 business cabin. This aircraft is configured with 3 classes (first, business and economy). One noticeable difference in business and first is the lack of central overhead bins. The premium cabins had very light loads on my flight so there wasn’t any hassle finding bin space, but when it gets full I’d imagine the overheads would be harder to find space in. The first and business cabins are separated by a hard bulkhead and curtains across the aisle. The business cabin is separated from economy by a large galley. I’m not sure what’s available in economy as I didn’t have the time or energy to take the walk to the back of the bus on this flight. I’m guessing its just a different engine type however I’ve noticed that on some Airbus aircraft the engines sound different to others (more of a high pitch noise than a low dull noise). On this aircraft it was the higher pitch type, which I find a little annoying but you only really hear it during take off anyway so its no big deal. Overall a clean well maintained aircraft, although the choice of colour/upholstery style was a little dated. 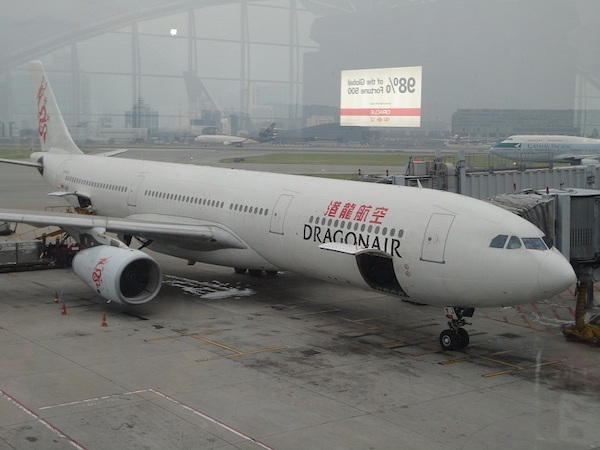 Terminal: Hong Kong International Airport is a massive airport. Our original flight landed at gate 16, while our departure was from gate 49, about a 20min walk and train ride. After clearing security we went to the closest lounge to our arrival gate, which happened to be the Gate 16 lounge. We only had about an hour before boarding, and with a 20min transit between gates we didn’t spend a great amount of time exploring the airport. Thus I’ll do a more comprehensive review of Hong Kong Airport on the return leg, when we spend an extensive 6 hours at the airport.

Departure: The doors to the aircraft were closed on time, and the aerobridges pushed away from the aircraft right on time however our departure from Hong Kong was delayed by 35 minutes due to passing thunderstorms. After being travelling for so long already the delay was an inconvenience, I much prefer to be delayed and safe on the ground than being thrown around in a thunderstorm. Even though I love flying, the super hard landing on AirAsia a few weeks ago has made me a little more weary of bumps during flights, thus a smoother thunderstorm free take off was much appreciated. The short taxi to the departure runway minimised the delay before we took off into the Hong Kong haze before climbing and circling Hong Kong until we reached about 15,000 feet then turning towards Wuhan. The captain’s welcome warned of some turbulence however other than a few bumps this didn’t eventuate despite some skirting around several massive thunderstorm clouds on the way to Wuhan. I filmed the departure, but as the haze was very thick its only a short video as soon we dissapeared into the smog.

IFE: In Business Class there is no personal TV’s, instead there are LCD screens at the front of the 3 row cabin which displayed the moving map before the TV programming commenced. I didn’t actually get the headset out, however whatever was showing appeared to be in English with Chinese subtitles.

Meal: On boarding we were offered apple or orange juice or the dragon air signature cocktail – Dragon Sunrise (Gin, Guava and Lemon Juice). Having already had what seemed like a bottomless glass of champagne on my last flight, I went with the apple juice. As we waited on the ground for the thunderstorm to pass we were offered some champagne (which I obliged) and some nuts to pass the time. Once in the air and pointed towards Wuhan we were offered Dinner which began with an appetiser of Duck Terrine with Apple Celery Salad followed by the choice of Thai Green Curry Pork with Steamed Rice or Sole Fillet and Prawn with Miso Beurre Blanc, Potato Gratin and Vegetables. As with Cathay Pacific, Dragonair bring each of the choices to you so you can have a look at them before selecting your dish, which is handy as sometimes menu’s can be deceiving.

Being a non seafood eater, I went for the Green Curry. The duck terrine with apple celery salad was quite nice, although the Green Curry was a little dull so I didn’t finish it all. Although it was served in a nice dish the contents looked like they were from the aluminium foil tins served in economy. A range of breads including garlic are also offered with the meal before finishing it off with a selection of ice creams and chocolates. 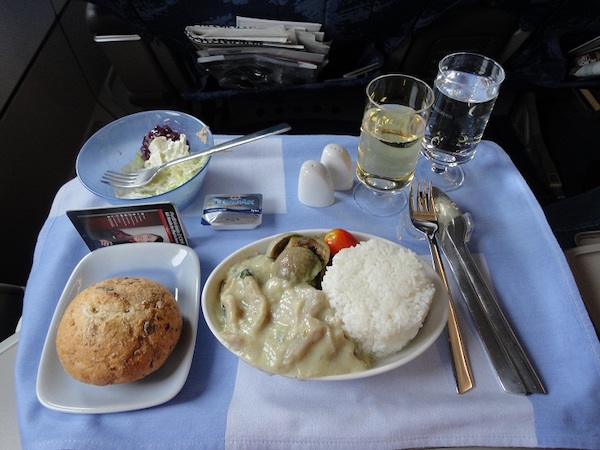 Crew: The crew speak English which is a plus, greeted us by name and escorted us to our seats on arrival. With the very light load, I think there were more crew than passengers in the business and first cabins, thus the service as pretty quick (with the exception that they forgot my water, but were overly apologetic about it so all good). My colleague was presented with a survey to complete and joked about giving them a lower rating due to the delays, but in all the crew were pretty good, especially at keeping our drinks full – whether we wanted them full or not. I sensed that they were disappointed when we declined the ice cream for desert as they seemed very eager to give us everything the could over the 2 hour flight.

Arrival: During the flight we skirted around some major thunderstorm clouds before beginning our decent into Wuhan and into the haze. During the decent I counted about 4 other flights zipping around us (which isn’t something you that much of in Australia). Like Hong Kong, the haze is very thick so we were quite low before I was able to make out the masses of fish farms below as we began the final approach. My first landing in mainland China was smooth and uneventful and it wasn’t long before our aircraft was met by a follow me car and we began the taxi towards the terminal. The terminal at Wuhan looks very new and modern similar to many other airports like Kuala Lumpur but on a smaller scale with large windows and a hanger like roof span. Following the little “follow me car” our aircraft taxied past the terminal building with many empty aerobridges to a remote stand across the apron from the terminal building.

After a few attempts, the stairs were brought up to the aircraft door and we were ushered onto awaiting busses. Although the other passengers in Business were in a rush to get off the plane, I we didn’t see the point as the busses had to wait for the rest of the plane to disembark before they left anyway. It was here that we realised that that bright new pretty terminal was not the international terminal, instead a much smaller hanger style terminal was to be our arrival point into China. Although very basic, the terminal was pretty efficient. It only too about 5mins to clear immigration, collect our bags and then clear Customs before being greeted by our hotel driver and being whisked away into downtown Wuhan.

Overall: I was pleasantly surprised with the service and comfort on this short flight from Hong Kong to Wuhan. You can tell that Dragon Air is a subsidiary of Cathay Pacific as the service standards, presentation and cabin attitudes are very similar albeit on a slightly smaller scale (at least in the Business Class). The A330 aircraft as nice as its bigger and thus feels safer than the A330/737 options, especially given the amount of thunderstorms around. If you ever need to get to Wuhan from Australia (I’m still not sure how much, if any, Australia – Wuhan traffic there really is annually) this flight provides a really good connection from the early morning Cathay Pacific flight ex Sydney