Terminal: Attempting to check in online failed last night with the same error message occurring on each attempt. A quick tweet to @JetStarAirways revealed that online check-in wouldn’t be available for me today, and they recommended that I arrive at the airport early enough for check-in. This meant arriving at the airport a little earlier than planned, however travelling only with carry on luggage meant a quick stop off at the self service kiosk, print off the boarding pass then head to security.

As Jetstar are owned by Qantas, the benefits of priority security and lounge access for Qantas frequent flyers still apply when flying on the orange kangaroo. There were a fair few people getting away from Melbourne for the weekend this morning so the priority security was a relief before grabbing some breakfast in the Qantas Club before the flight was called. My mobile was having issues this morning, so for the first time I realized the benefit of the complimentary phones scattered around the lounge. 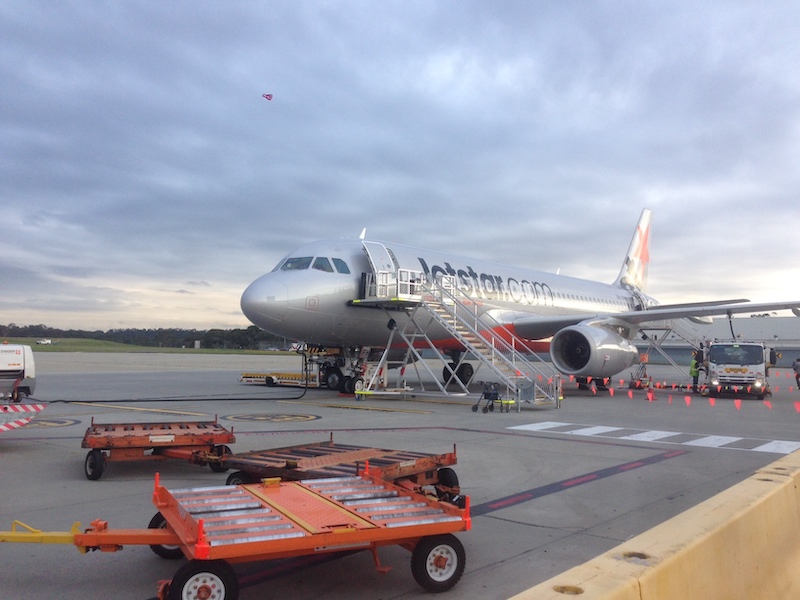 Most of Jetstar’s flights depart from the newer concourse in the joint Qantas / Jetstar terminal, with my flight leaving from Gate 27 within the shed addition to this terminal. Aircraft are turned around pretty quickly and has boarding had already commenced on my arrival there wasn’t really a queue at all so it was just a short walk across the terminal, up the stairs to be warmly welcomed by the cabin manager before settling into 1A.

Departure: We departed about on time despite some members of the crew being concerned about the time required to brief two customers with additional needs (specifically, deaf and blind). The cabin manager however was great assisting these passengers, ensuring that they received a personal safety briefing before allowing the final door to be closed. A reminder to the crew that, as there is no galley on this aircraft, your conversations can be heard by your customers; thus consider if your conversations reflect an image that your company would want promoting. 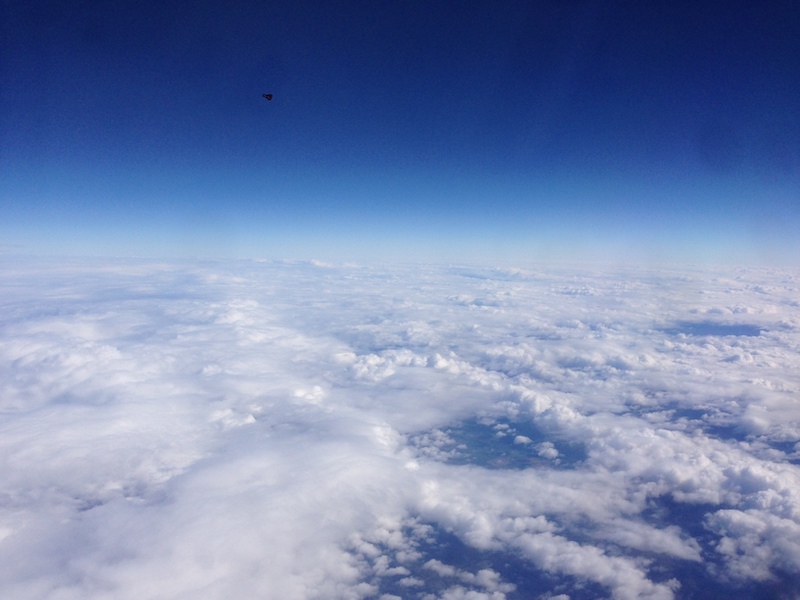 We departed to the west, climbing out and making a few right turns towards the north, crossed the NSW border around Corowa, tracked over Wagga before making another slight turn and heading towards Ballina. Our flight time was forecast to be a relatively short 1hr 47mins with an expected on time arrival into Byron.

Seat: 1A. This seat provides undoubtedly the most amount of legroom within this aircraft, with no bulkhead and your legroom only limited by the crew seats (which if you can reach, you’re doing well). Just watch your head when getting in and out of this seat, as the overhead bin will cause you grief pretty quickly if you are too mesmerized by the amount of legroom on offer. Tray table is in the arm rest and is surprisingly sturdy, with only limited bouncing of my laptop as I write this review. Like all economy seats, you’ll struggle to fit a laptop and a meal on the table, but a 15” laptop and a drink fits comfortably. 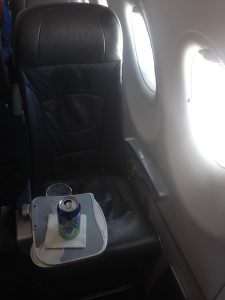 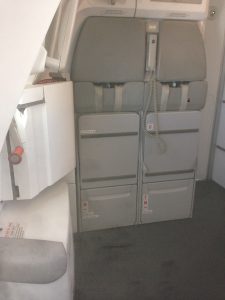 Aircraft: Airbus A320. This is the mainstay of the JetStar domestic fleet and offers an all economy layout in a 3-3 configuration. Exit rows and seats in the first few rows have surcharges on them, however these are relatively reasonable and in my opinion worth the extra cost for anything over an hour flight. 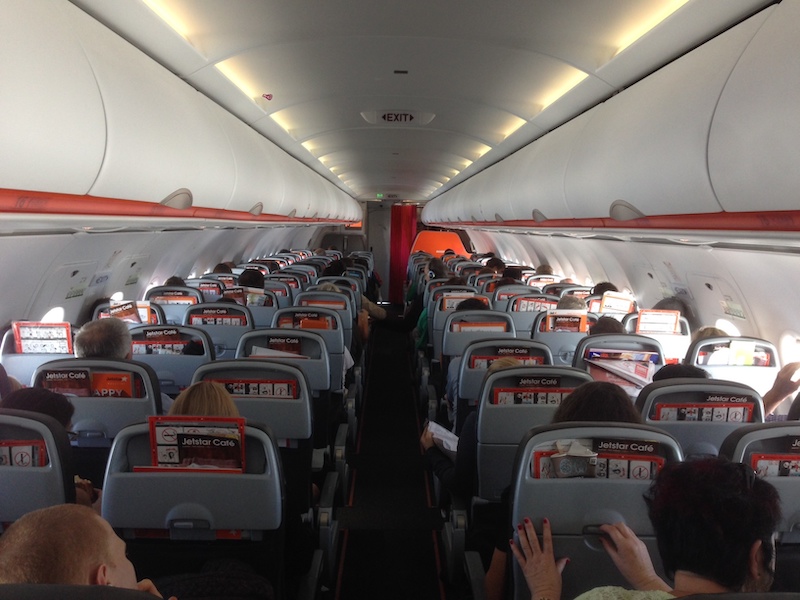 IFE: No free IFE is available, however rent on board tablets were offered once the seat belt light was extinguished. I didn’t opt for them on this short flight however they looked similar to those that I reviewed last year flying JetStar to Hawaii (which you can read here). I instead opted for my iPhone for music and my laptop to get some work done. Unfortunately I forgot my headphones on this day trip, but the crew kindly offered me a complimentary pair of headphones, which did the trick for this flight.

Meal: The Starter Plus fare I purchased included a $5 voucher to use on food and beverage onboard. The buy on board menu has a range of snack options including muffins, cookies, cheese and biscuits, as well as more substantial options such as hot pies, fresh and toasted sandwiches as well as a range of beer, wine, spirits and non alcoholic drinks. The crew makes a point that they reserve the right to cut you off the booze plane if they feel you’ve reached your limit. 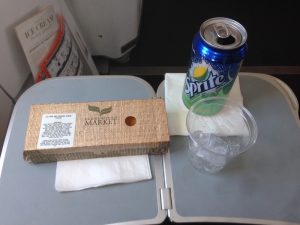 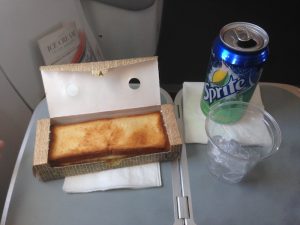 Although not overly hungry, the $5 voucher tempted me to try the menu, so with the addition of $4 I purchased a can of soft drink and a toasted sandwich (which takes about 10minutes to prepare). Once prepared the hot (which should have been accompanied with something along the lines of “hot plate, hot plate”) ‘Paddington Market’ branded ham and cheese toastie was served. After almost burning my fingers, I decided to leave it too cool before trying it out. Once at a more reasonable temperature, the toastie was pretty good for inflight. The packaging worked well, and for a simple snack it was filling enough to sustain me for the rest of the morning (of course the sugar in the can of soft drink probably helped a fair bit too).

Arrival: A strong southerly breeze resulted in a bumpy arrival over the ocean and a new housing estate before touching down at Ballina Byron Bay regional gateway airport. A decent chunk of reverse thrust and heavy braking pulled us to a stop before continuing to the opposite end of the runway where were could turn around and backtrack to the terminal building. The ground crew were ready for our on time arrival and within few minutes we were walking across the warm tarmac and into Ballina. 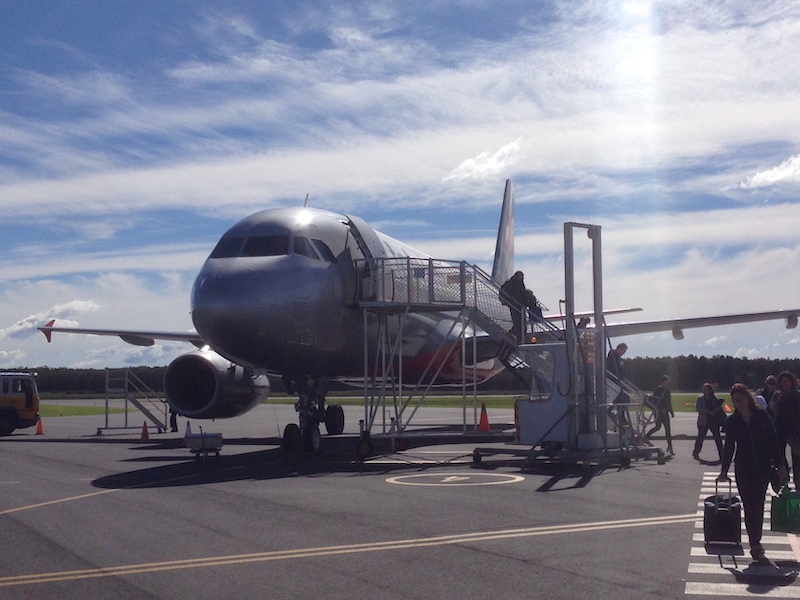 Crew: The cabin manger was great and ran the flight really efficiently. The other crew were efficient and made a great team. I was a little disappointed with one crew member’s comments about her view on passengers with special needs and the need for companions, however overall they did well. I think they need to be mindful that without a front galley, the first few rows can hear what you say.

Overall: Overall this was a really pleasant flight, good service and a really convenient link between Melbourne and Byron Bay. Although I personally love to fly the least direct route possible, for small communities these direct air links provide a great boost to their tourism and local economies! Thanks @JetStarAirways for a great flight.