Terminal: After a relatively cold day in Edmonton for this Australian visitor, I took a taxi out to Edmonton International Airport to escape the cold, heading back to where I started my trans Rocky Mountain journey in a slightly warmer Vancouver. The terminal has recently undergone some expansion works and renovations, which in my view have resulted in a very user friendly, spacious and comfortable terminal.

Check in is neatly laid out with several self-service check in kiosks complemented by several bag drop and general check in desks. Although I could have used the check in desk for the full process I decided to try out the self service kiosk, where I was happy to find that I had been auto allocated an exit row. After receiving my boarding pass, I went to the priority check in desk to drop my bag, before proceeding to the central hall security checkpoint. 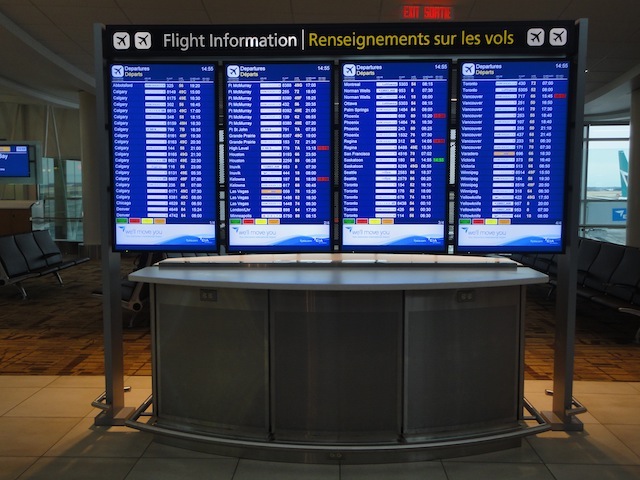 Although security in Canada does have some similarities to their southern neighbours, the staff are polite, professional and much more efficient. They also have a neat counter where you can easily post items that aren’t permitted past security, a service I fortunately didn’t need to utilise.

Once past security you arrive in the central hall complete with multilevel high ceilings, large windows and several shops and dining options ending in a large viewing window onto the apron. It seems that many regional flights leave from the concourse leading to the right of the central hall while domestic and international departures leave from the concourse to the left, where my flight to Vancouver would depart.

Although there were still some works in progress I was really impressed with the terminal and the way it was heading and spent a bit of time exploring the terminal itself before finding the Air Canada lounge, which was located a level above the departures concourse opposite Gates 54/56.

On my recent US airline reviews I’ve included the lounge in the general flight review article, mainly because they haven’t offered a quality service worthwhile of review. However the Air Canada lounge in Edmonton deserves a review of its own so I’ll leave that out of this Inflight review and post a separate article later in the week.

Departure: Anticipating a US style boarding scrum, I headed down to the gate a few minutes before the scheduled boarding time to try and score a good position to get on board and access to the limited overhead storage bin space on the E190. Despite a short delay the boarding process was very civilised with people boarding according to class and status levels and very little scrum to speak of. So much so that on board I was able to take a photo of a pretty much empty cabin, a rarity on a North American flight. Shortly after taking my assigned exit row seat, the plane filled up and we were ready for a departure. Another slight delay in paperwork ensued before the final door was closed and we pushed back and taxied for departure. As we taxied along one of the other passengers behind me called the flight attendant after noticing that one of the baggage carts had dropped a bag onto the taxiway ahead. The flight attendant alerted the crew who I presume contacted the ground crew as shortly afterwards a little buggy zipped onto the taxiway to collect the lost bag clearing the way for our departure. 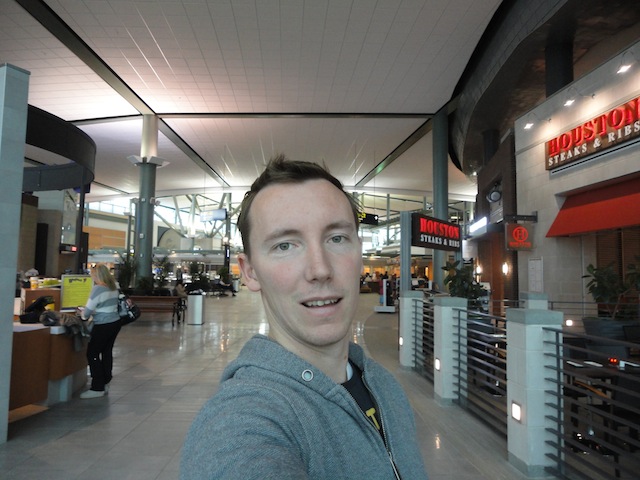 Our take off roll was relatively short before we climbed into the cold Canadian skies and headed back across the mountains for Vancouver. I was surprised how high the cloud, albeit rather light was as we continued to climb though endless clouds before reaching a hazy cruise altitude as the sun quickly set. Unfortunately this late in the afternoon, with the amount of cloud around there was no chance of getting any sort of a view of the magnificent Rockies beneath. 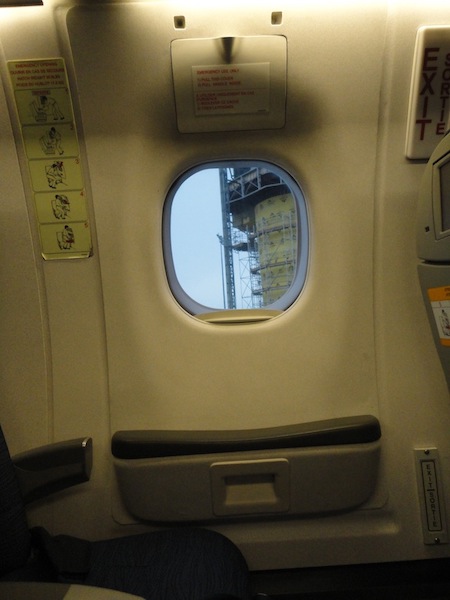 Seat: 19C. Unusually for me I opted for the aisle seat on this flight, primarily as I was allocated an exit row and each window seat was already occupied thus opted for the extra legroom instead of the extra view (which in today’s weather was non existent anyway). The seat itself is covered in a blue fabric and has a decent amount of legroom thanks to the emergency exits located on this row. Although I didn’t really need to use it on the short flight, given I already had extra legroom anyway, the seat also reclines and the tray table (complete with emergency exit operating instructions) still folds down from the seat in front meaning you don’t loose seat width from an inarm tray table 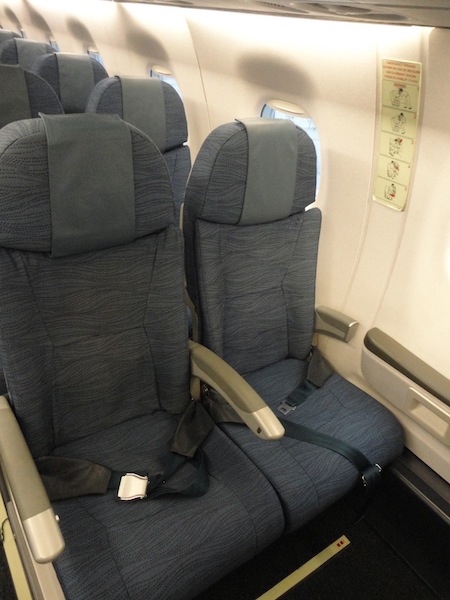 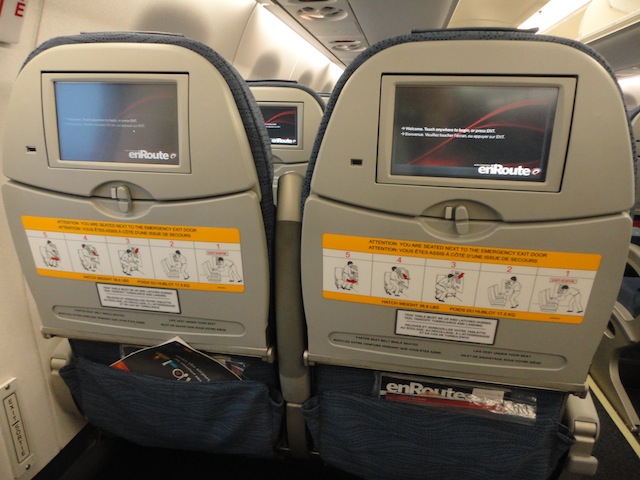 Aircraft: Embraer E190. I’m a fan of the Embraer family of E-jets, having flown on them previously with JetBlue and Virgin Australia. Their smaller size means it feels less crowded and more personally, and the 2-2 seating means there is no middle seat to avoid. This particular bird was in good nick appearing quite clean and fresh, although after so many flights, the consistently blue interior seating colour schemes are starting to get a little boring.

The only issue with the E-Jet series is the size of the overhead bins, which even a bigger issue in North America where everyone brings everything on board – quite simply it wont all fit on these birds. Other than that they have all the comforts you’d find on a 737 yet the smaller cabin makes the experience feel more personal, and slightly more comfortable.

IFE: Each seat is equipped with its own in seat back video screen offering a selection of movies on demand and TV programming, which was a nice addition and a great way to use up the short flight time available. Advertisements are played at the beginning of the shows, and the navigation takes a little getting used to but overall it’s a great little system to provide on demand entertainment to all passengers. There is also a moving map available to check your progress along the route. 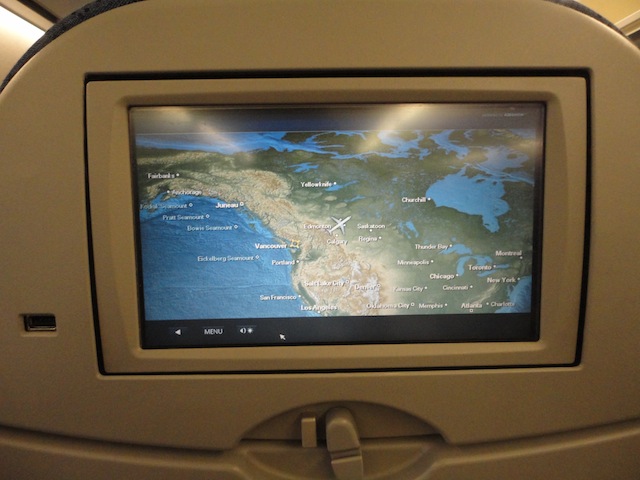 Meal: The meal served during the flight will depend on the fare type purchased, with higher fare classes being provided with free snacks, while my fare class (being a Tango fare) coming with a free choice of soft drink, juice, tea or coffee. Although snacks are available for purchase as are alcoholic beverages if the mood so takes you, the crew distribute packets of pretzels free to everyone onboard with the drinks service. For me the soft drink and a few episodes on the inflight entertainment were all I needed.

Arrival: The captain advised that the weather on arrival in Vancouver would be wet, and Vancouver didn’t disappoint his prediction with constant and low cloud making a bumpy decent and a wet landing at Vancouver. The low cloud and reduced visibility meant there were no good views of the area on decent, which was disappointing as Vancouver is a magnificent city with a spectacular mountain backdrop.

This was my first arrival in the domestic terminal at Vancouver, which isn’t quite as good as the international terminal but still very clean and efficient. My checked bag didn’t take all that long to arrive on the baggage carousel and despite the heavy rain outside it arrived relatively dry. I was meeting a friend at the car pick up station located outside the international terminal, and after asking a friendly airport concession operator for directions I made the short walk across and within a few minutes was being driven out of the airport ready for a few great days in what would become an unseasonably sunny Vancouver week.

Crew: As Canada has two official languages, French and English all announcements and placards are required to be made in both languages. I’ve read reports of people travelling specifically waiting for an airline to miss an announcement in French, then subsequently claiming damages from the airline, however interestingly on this flight the crew had a much better grasp of French than they did of English, with French being made first followed by English. One interesting translation was “exits are located on-board the aircraft” which was good to know.

Despite a slight language barrier, the crew were friendly and keen to assist in making the flight a comfortable journey, stopping to chat to some passengers who wanted to have a chat. In today’s day and age, the observation I’m about to make is highly politically incorrect, but none of the crew looked like they fitted the standard flight attendant “image” that you’d imagine. Not that this affected the service at all, it was just a very diverse crew which was something you don’t always see.

Overall: Edmonton International Airport really impressed me, after being rather unimpressed and confused as to the purpose of Edmonton itself with its location in what seems to be a very inhospitable climate! The first impressions of a flight experience start on arrival at the airport, and if things don’t go to plan, or don’t have a good feel to it, that initial impression affects how you view the remainder of the flight. This was my first experience of Canadians flag carrier, Air Canada and like my impressions of the rest of Canada, and the Canadian people I was impressed. It felt quite similar to flying back home, which adds to the comfort factor, and overall enjoyment of the flight. Unfortunately this was my only experience on Air Canada, and it was a short flight, in economy so my aim for my next trip to Canada will to try their premium product, and perhaps their new Leisure carrier, Air Canada Rouge that launches in July 2013.