It’s been too long since I put any articles up on the site, ironically because I have been travelling a lot lately and haven’t had time to write a new article. However that shouldn’t mean that I can’t post something to the site, so I’m launching a new article style today, the flashback. The first series of flashback articles goes back to last year’s tour of the Canadian Rockies. These articles have been adapted from my blog during the trip and a new one will appear each week for the next 10 weeks ensuring that there is at least something new on my site every week. So without further chatter, here it is, let the flashback begin… 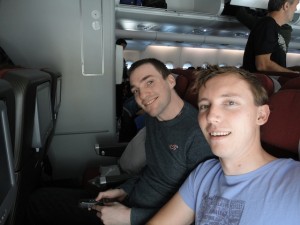 It wasn’t long after my first post from the Qantas Club lounge that Cam and I made our way up to the departures level and met the A380 that we (mainly me, but Cam too) have been so looking forward to getting on. And then we were off on our first venture Canada, after the mandatory US secondary screening before boarding of course, nothing like adding another layer of bureaucracy to security screening.

Fortunately for us, our flight wasn’t packed (although wasn’t empty by any means) so we were lucky enough to have an empty seat in the bank of 3 that I had carefully planned and selected for us which allowed us to spread out a little (although looking back we primarily used the spare to store our stuff like the pillows, blankets and our netbook). Even though I had spent hours (if not days) carefully selecting the seats they weren’t without drawbacks such as the galley light breaking through the curtains just enough to ensure that someone like me who likes complete darkness couldn’t get that much sleep. 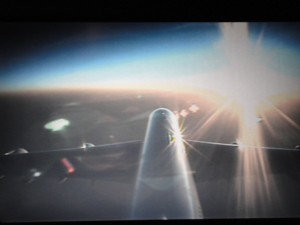 Of course there was also the comical incident just before take off when they couldn’t get the overhead bin closed above our seats. The irony of a brand new A380 that still has the new airplane smell and already having broken parts bits already broken parts was lost on the engineer brought in to look at it… He couldn’t fix it so we moved our stuff to other bins and out came the airplane strength duct tape to fix the problem. I joked to him that they should send it back under warranty. Although he didn’t seem to find it amusing, the cabin crew did. Looking back the faulty overhead bin was small fry to the problems these beautiful birds would face several months later.

The service was great throughout the entire flight. Our helpful flight attendant Michael and his off sider (I think that was his name, if not it is now) were a hoot. The lady behind us had had enough of the flight after about 4 hours (only 10 to go), so the crew kept up the booze till she fell asleep… good work! Before she fell asleep we chatted a bit, which always helps pass the time on such a marathon flight. They were off to Vegas, LA and Honolulu for a 3 week holiday which was sounding more like a party trip, and with all the booze on the flight, they were starting early. 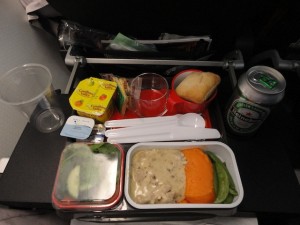 Everyone always complains about airline food, but I thought it was good (well as good as you can get when you are making something for 332 economy cattle) although the portions were pretty small.. I could have gone another serve of the chicken with mushroom sauce although this was compensated for as they accidentally gave me a Goulburn Valley Fruit salad thing too. Cam wasn’t impressed when he asked for his and they said no (although they did eventually soften up and give Cam one, only to have him turn around and ask for a spoon to eat it with. Was pretty funny as the (now pissed) lady behind us made jokes about how we were getting special treatment (its amazing what a smile can get you at 39,000 feet – Cam says I flirt with the crew, but I just smile and we end up with extras.. like PJ’s on our return trip!).

Anyway the meal came and went, and it was time for some movies. I watched “Up in the Air” and contemplated how long I’d have to be stuck on this flight for to rack up the 10million frequent flyer miles. It may have also been where I added it to the list of things I needed to do before I die. That was followed by a few episodes of are you being served before I flicked through a few movies (deciding that the Alvin and the chipmunks comeback movie was not for me) before settling with Couples Retreat. Meanwhile Cam watched “the lovely bones”, followed by 5 episodes about business, corruption and the like. Ironically listed under the business channel.

I love the skycam that they have on the plane and also loved the Flight Plan screen which gave all the details of altitude, speed, distance to destination and so on. The only problem with it was that during the last 4 hours it seemed to move slower (or maybe I was just ready for land). I did really notice that there’s not much out there between Hawaii and the mainland USA… which seemed to get further apart as I got more and more excited about our arrival. 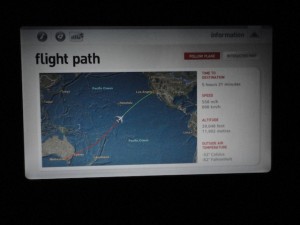 Landing at LAX was great as we came in over the Hollywood Hills and saw the Hollywood sign from the air. As we came in a chick (recently married and thinking she’s pregnant) a few years older than us came and sat with us as she wanted to get off the plane first to make her 1 hour connection time. She was very friendly in the 10mins we chatted. She was rushing home for a funeral and still had two connections to go. One in Philadelphia and one in Atlanta to get back to her family,  Hopefully she made her connections.

Earlier I mentioned the US bureaucracy that you go through just to transit the country. First we fill out the electronic visa waiver prior to departure, then we filled out a hard copy of the same form on the plane (which was actually 2 forms holding the same information.). Anyway we fill that in, give one copy to the officer (mine wasn’t that friendly – “right fingers, right thumb.. look up”) who then tears off a section and staples it to our passport (which we later find we have to remove an hour later on the Alaskan Flight as we were leaving the country. Nothing like a seamless international transfer at LAX that’s for sure.

Meanwhile we connected fine and had about 40mins in terminal 3 waiting for our Alaska Airways flight to Vancouver. The weather in LA was great. It was 730am and it felt about 20degrees. The display boards list Vancouver as 5 degrees, more on this in the next post. During this time I went to buy a drink and returned to find Cam had struck up a conversation with an older couple. She was great, and ended up taking a photo of the “two Aussie hunks” for her daughter (oh well she can live in hope). 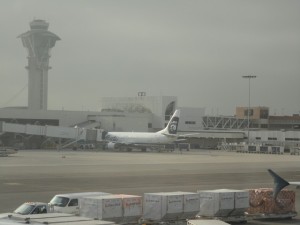 Alaska Air were good, pretty casual but was a good simple service with just free drinks (non boozey). The view from the right side of the plane was great. So many snow top mountains and frozen lakes in the valleys…. It was all very pretty, but had no idea where in the USA they belong. Alaska were offering upgrades to first class for $50US which tempted me but for a 3 hour flight it wasn’t really worth it. Was just as good as we struck up another conversation with Anne from Tasmania who was off to visit a friend in Vancouver – she was lovely. Most of the people we have met so far have been really friendly which has helped make the long trip bearable. If you don’t mind chatting to strangers (even though parents drill this into us from an early age never to do), it can make the time at airports and in planes pass much faster. Although in our case, we chatted to Anne for about half the flight, then the next minute we were all woken by the “fasten your seatbelts for landing” after falling asleep mid sentence after a very long morning of flying. 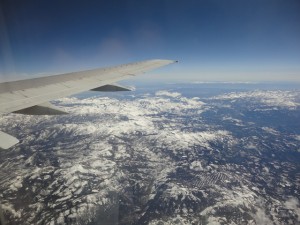 We arrived in Vancouver about 20mins early, which was a nice surprise after traveling for about 19 hours. The terminal at Vancouver International Airport is magnificent and feels much more like a hotel lobby than an international airport. The Customs and Immigration staff are friendly and welcoming and the whole environment just felt warm, comfortable and like arriving somewhere you’ve been a million times, even though it was our first trip to Vancouver.

So that’s the end of the first Canadian flashback article, next week check back to hear about my favorite city I’ve ever visited. In the meantime you can let me know what you thought of the flashback post idea while I pull my finger out and start writing some new articles. Also for those who like the odd you tube video of a plane taking off, check out the following video that I took from the Sky Cam during take off from Melbourne onboard one of Qantas’ Airbus A380’s.