All Aboard! “The VIA Canadian”

The are plenty of great railroad journeys around the world that many aspire to complete, the trans Siberian, Indian pacific or Rocky Mountaineer all come to mind pretty easily. Most people associate these grand rail journeys with equally grand price tags and thus feel they are out of reach. But there are other ways to see some of these spectacular railroads without the price tag, at least in Canada.

After much umming and arring, and eventually a promo 50% off sale I decided to book a section of “the Canadian” between Vancouver and Edmonton. Operated by VIA Rail (Canada’s main rail operator) this train is different to the tourist train, The Rocky Mountaineer, as it’s primary function is moving people from A to B, in this trains case the epic 3 day journey from Vancouver to Toronto. Fortunately the views aren’t owned by the tourist train and thus my 26hour ish journey across the Rockies was still going to pack in some amazing scenery. 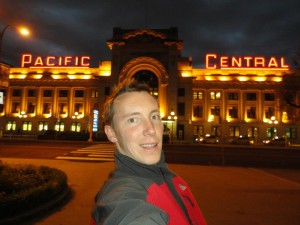 The main difference with VIA is that the train travels at night, meaning you do miss out in some scenery, however this balances out with the true train travel experience, sleeping (or at least trying to sleep) on a moving train. To make the most of that experience I forked out a little extra for a sleeper class, which wasn’t that much more than a coach seat yet offered private cabin and a bed. Arriving at the Pacific Central station in Vancouver about 2hrs before the 830pm departure was a tad early however provided ample to relax in the panorama saloon with outdoor heated patio overlooking the retro railway carriages I would soon be boarding.

There was an air of excitement as we all boarded our cars, found our cabins and explored the train. I met a lovely couple from Toronto who, after driving their son to Whistler for the winter were taking the train home. The had a double cabin which required an attendant to lower and set up the beds and were rather impressed with how easily my single cabin folded down into a cosy bed by turning one handle. Sleeper car passengers were invited for departure champagne in the rear park car, one of 2 split level trains offering panoramic dome views. Our retro train soon pulled ever so slowly out of the station and through the seemingly endless Vancouver rail yards before disappearing into the darkness. 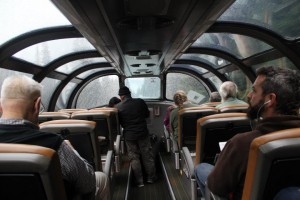 The trains carriages have been recently refurbished however maintain the original art deco styling, making them rather unique and much different to modern fast trains. For these railways, the journey is as much of a destination as the destination itself and they are not built for speed. Our average speed across the Rockies was estimated to be around the 40-60kph mark, hardly a land speed record especially as we pulled into many sidings to allow the priority freight trains to pass. After meeting several other solo Aussie travelers and a few lovely Canadians it was time to call it a night and see how the rocking motion of the train which is apparently one of the most relaxing ways to sleep worked on me. Before turing out the lights I decided to record the first of a few video blogs along this trip, which is included below. After lights out I lay in the very comfortable and cosy bed listening to the creaks and groans of the train while staring out the picture window to the scenery that was lit by the moonlight and lights from the train cars ahead. I could have stared out at this tranquil view all night but decided it was best to close the blind and try and get some sleep.

A few moments later we crawled to a stop, blocking a road crossing with the red flashing crossing lights illuminating my cabin like a red light district. This wouldn’t be the last random stop of the night as we slowed and pulled into sidings to allow oncoming freight trains to pass by safely. The creaks and groans of the train navigating the many bends on this railroad would also turn from exciting and relaxing to rather annoying and loud. I think the combination of being a light sleeper and being over the wheels meant it was going to be a rather loud and disruptive sleep. None the less I must have got some sleep as I slept straight through our 40min early morning stop in Kamloops and awoke to the magical views of rivers, forrest and the growing rocky mountains. My good morning Rockies video blog is below.

I got dressed and wandered up to the dining car for breakfast. As a sleeper car passenger all meals are included which for breakfast included several options including a salmon omelette which I heard was amazing and the full hot breakfast which I chose which was equally good. Meal times are a great time to meet fellow travelers and share travel experiences and backgrounds. As each table is filled with solos or couples you never eat alone. After breakfast I decided to relax in bed again watching the day go by before we pulled up for a 10 min stop I the the small town of Blue River. The general store, nicely positioned by the railroad did a roaring trade before we slowly continued on our journey across the mountains. 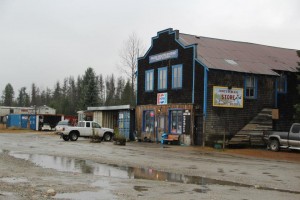 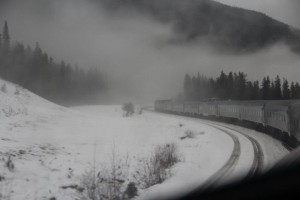 I decided to have a quick shower before spending the day either napping in my cabin watching the views or sitting in the dome car – Both options were very relaxing experiences. As it was fall the common theme across the the mountains was rain, snow and fog meaning the tops of the mountains were hidden. Despite the weather the colors of the fall leaves and seeing the railway covered in a nice dusting of snow was rather spectacular on its own.

Lunch was served and then the afternoon was spent much the same as the morning with the only change a 1.5hr stopover in Jasper which provided enough time to wander around the town, kick around some snow and meet a local bear as I describe I the video blog below.

Back on the train I ate dinner with an older Dutch lady who reminded me of my own Oma, a fiddle playing Australian beginning her 2 year travels across Canada and a rail enthusiast staring a mega train journey from Vancouver to Fort Lauderdale via train. Every meal you meet new people and share new stories while eating some lovely food all cooked on board. During these times you really can imagine the history of the railroad when these dining cars would be filled with the rich and famous, men in suits and women in elaborate dresses taking what was then the fast journey across this massive continent. The weather had improved around Jasper and thus the views over dinner were breath taking, adding to the romance of rail travel. 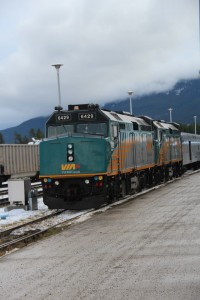 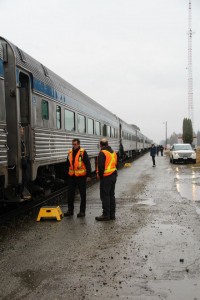 The sun soon set as we left the mountains for the flat prairies of Alberta and the long and slow trek into Edmonton for an 11pm arrival. As most guests were comfortably trying to sleep I was struggling to stay awake but fortunately my car attendant came and collected me when it was time to disembark this amazing rail journey onto the icy platform of Edmonton.

If you’re on a tighter budget but still want to experience the Rockies by train, I’d highly recommend this train route – during summer prices are higher but I’d imagine the views are even more spectacular. Although I found the romance of the snow covered tracks very appealing and definitely worth an off season trek across these amazing mountains.

CarlousMoochous has branched out and started a travel company providing small group tours to Canada. If you’re interested in visiting Jasper check out the Canadian Holiday Packages available from YourTrip at www.yourtrip.com.au